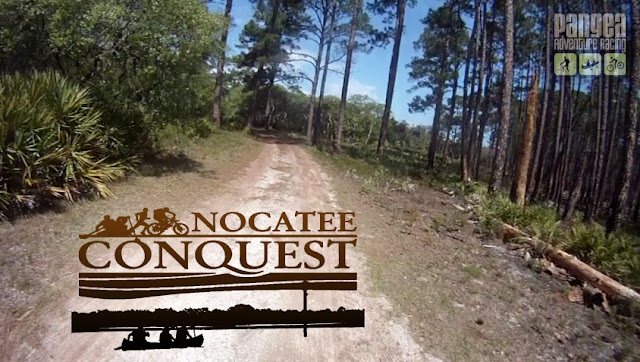 This is the second 12hr race I have done, and it still does not cease to amaze me how vast a 12hr race is.  Juan Chavez is our newest member who took on the challenge of a 12hr for his first adventure race.  We took what we learned from our previous races and tried to apply it to the Nocatee.  Steady eating and constant map measurements proved crucial and effective.

PreRace
We arrived around 3:30am to a well lit and quiet parking lot in the utopian town of Nocatee.  Roda had arrived much earlier and had been sleeping in his car for hours.  4am came and we grabbed maps, strategized, and launched off the starting line at 6am.  Jeff, the designer of the course, went over a few notes and one thing that was interesting was that he allowed for much more relaxed order of collecting CPs that gave much room for strategizing. 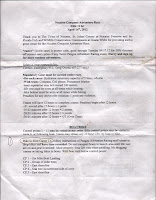 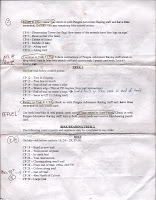 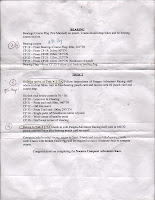 Biking
The biking road was still rather dark as we headed towards Guana Park which contained the Boat TA.  Somewhere at the beginning when all 11 teams were still clustered tightly together on bikes, one guy had the unfortunate incident of wrecking into a bridge railing, flipping a few times, and breaking his collar bone.  We all felt for him and wish him the best of luck towards recovery.  It takes an incredible amount of training to do adventure races of this caliber, and we are well aware accidents can happen to anyone. 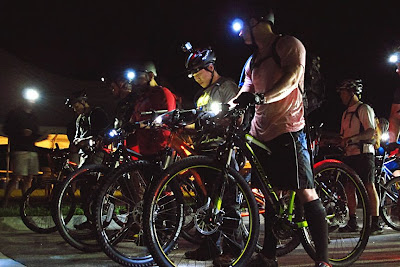 We were allowed to pick up bike points along the way, so as to not have to backtrack so much.  We grabbed CP 11, 10, and 9 on the way to the Boat TA. 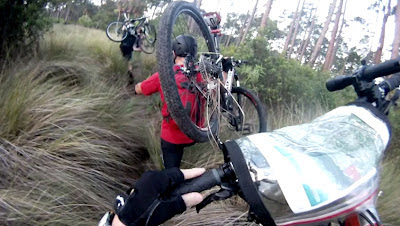 The map was a Google Earth imagery and Jeff had warned us ahead of time that the trails seen on map did not encompass all of the trails existing in actuality.  This meant that measuring distances ahead of time was extremely important.  You did not want to say "ride by 3 intersections and take the 4th to the left."  There could be two more intersections in between that were not mapped and could send you down the wrong path.  Instead, you had to measure and say, "ride approx. 1.25km east and take the left near there."  CP 10 was one that needed precise measuring, as there was no object of attack shown on map and the clue was an ambiguous "along trail."  We had no trouble finding these three control points.

CP9 required a short, yet energy-consuming bushwhack to the north side of the lake while following the muddy shoreline towards the CP.  Thinking the shore line was ok to ride on, we bushwhacked the area north of CP2, trying to obtain a boat control point on bike (transportation is faster on foot and bike, versus canoe).  It turned out we lost 21min pushing our bikes through the thickest forest/shrubbery, filled with thorns, only to realize the shore was all marsh and no good for further traveling.  We called it off quick after a minute of trying to walk through sinking mud and headed to the Boat TA on the conservative route.


Boating
Chris Roda used prior experience to say that we needed to hit the boats before the wind picked up and made paddling tougher.  We also wanted to use more energy at the beginning, which to us, meant picking up the southern CPs first, since the wind was blowing from there.  We could use the wind to our advantage heading back as the day moves and we get more tired.  Canoeing had been a major weakness for Canyoneros in the past, but this time around we had training under our belt.  There was one point where we had to move to shore to swap paddlers because of the lag between the two canoes.  After that, the speed evened out pretty well.  We actually cleared the paddle portion for the first time in Canyonero history!  ...with a decent time of 3hrs 10min!  (that's very good for us) 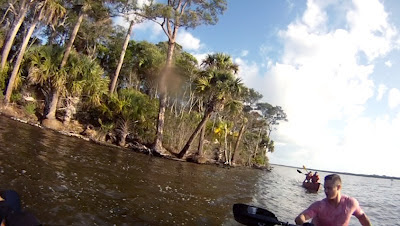 CP1 was the last control point for us to punch.  It was also the most difficult, since we ran into many areas of shallow water, forcing us to push the boat along on foot.  Once we got to the CP, we noticed a team on bikes picking it up.  How could a team be on the opposite side of the intercoastal river when there were no nearby bridges?  After reading Ron's blog, we believe that team was Primal Instinct, who apparently collected all of the canoe points on bike.  They traveled a LOT of distance on bike to get across that river, but it proved successful, since they saved nearly an hour, versus if they had done it on boat.  Well played. 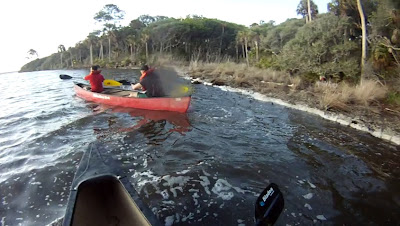 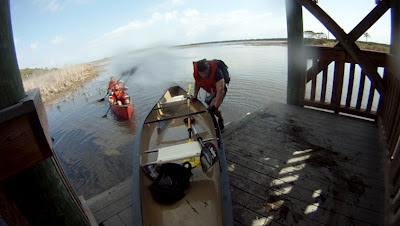 Biking
Biking is our bread and butter and we intended on making up lost time on this discipline.  CP7 and 6 were easy to get to.  I made sure the distances were well measured and stayed on top of, as we passed by several unmapped trails.  On the return route, Juan started falling behind as we headed towards CP8.  This control point fooled us many times with phantom trails.  I recall going in and out on about 3 trails before finding the correct one that led out to the 'island'.  Talk about the worse off-road trails you can travel on if you went down the wrong ones!  (large lumpy patches of grass with pitted ground, mixed with soft sugar and brown sand). 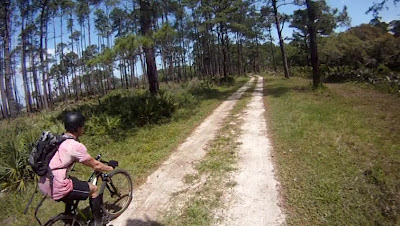 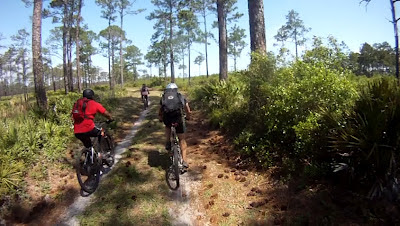 Going to the Trek TA, it was apparent that Juan was done with the bikes.  His quads were severely cramped.  I attempted to alleviate it by feeding him Saltstick electrolytes.  I think this was a problem of not eating as steadily and conditioning.  Regardless, we pushed on and started the trek portion. 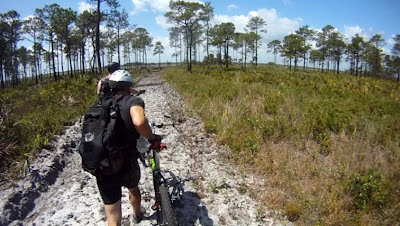 Trek 1
We attacked this in a clock-wise direction, wanting to pick up as many good-bang-for-the-buck ones first, in case we had to call off a few.  I measured out the distance from the intersection to CP12 and Roda counted paces fairly accurately.  We had a lower intensity, 600 meter bushwhack straight to CP13 to save Juan's excrutiatingly cramped thighs.  Walking towards CP14, we accidently missed the first trail leading east towards it and lost about 15min backtracking.  We successfully bushwhacked again from CP14 to CP17, but ended up caked in mud, both hands and legs, while trekking through super soft, sewage-smelling, warm marsh. 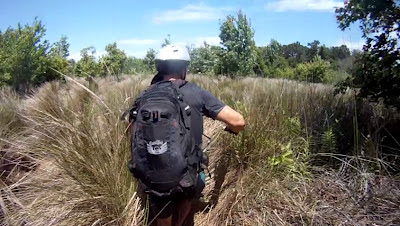 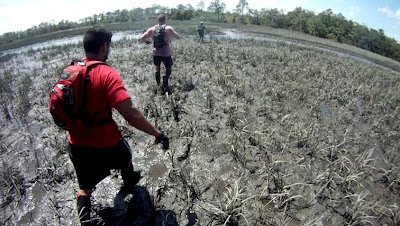 Bike/Bearing
We finally got back to the main TA about 9hrs into the race to refuel.  Juan was strapped into the tow rope so we can keep moving forward.  The tow rope is not too effective on some off-road trails, however.  There were a lot of single-track width, off-road, sugar-sanded trails. Building off the successes of our bushwhacking earlier, we attempted to do the same to CP25, but failed.  CP24 was also a failure with its convoluted system of smaller trails.  Apparently, we did not ride in far enough.

The bearings course was great bang-for-the-buck, timewise, as we found 4 out of the 5 there in relatively short order.  Juan's cramps gradually recovered at this point and we made a mad dash to the main TA, finishing 3 minutes late and scoring second to last on the leaderboards. 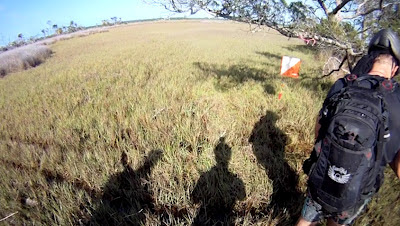 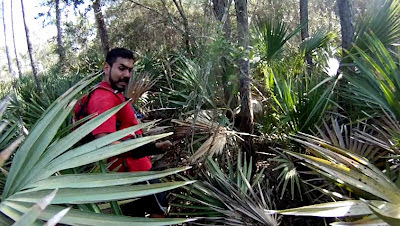 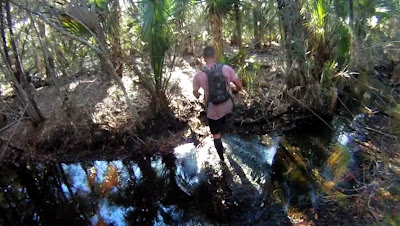 Conclusion
As navigator, I learned quite a lot from this race.  Measuring distances allowed me to always know where I was on the map and to reevaluate attack points if the distances were not matching.  This was the dirtiest race we have been through and some of us got attacked by ticks. 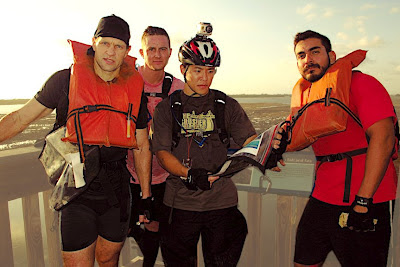