New to this year is the Dixie Challenge AR, a race that seemingly replaced the Nocatee AR of prior years.  Looking at the weather forecast ahead of time and knowing the reputation of Jeff Leininger's race designs, we braced for a challenging, muddy event.  He organized the race in a fashion that you would only get one of six maps at the start of each leg, forcing you to strategize on the fly.  We really enjoyed the format.  Immediately after setting up tent, it was pouring cats and dogs already.  Temperatures were in the cool 50's, which was perfect for racing, but when coupled with rain, it rattled your bones.  Apparently, I was the only one who didn't get the memo on bringing rain/cold gear. 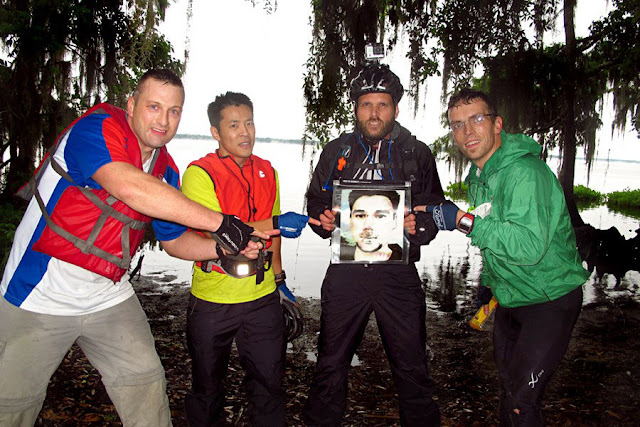 This race began the forging of two powerhouses--team Canyoneros and team We Blame Javan.  We had previously started training with Bill at FLO events leading up to this race.  Bill will also join us at the 30hr Atomic AR next month.  Robert is a veteran navigator who would provide me strong navigational support.  And Nate is the hound dog who always reliably sniffs out the CPs with uncanny ability.  Everyone was at the same atmospheric level of fitness as we raced our first event together. 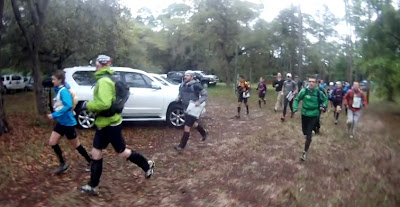 There were 7 control points (CPs) to warm you up.  We all agreed to start slow and accurate and do not let other teams distract us.  The CPs were all pretty basic, except maybe one that you had to have an idea of your distance traveled.  Surprisingly, our intended slow start still had us first back in transition.

Robert (left), Bill, Nate, punching controls and running to the next, all at the same time

There was nothing too eventful heading to the Canoe TA.  I kept on top of our positioning the entire time with the help of data provided by my teammates, just in case an unexpected trail popped out of nowhere.  Again, we were the first to Canoe TA with the fastest time of 38min. 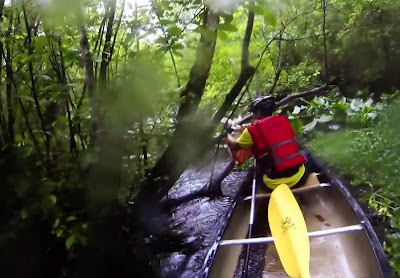 Heading out on the canoe voyage, we were in awe of a mystical thick layer of fog hovering on the midst of St. John's river. 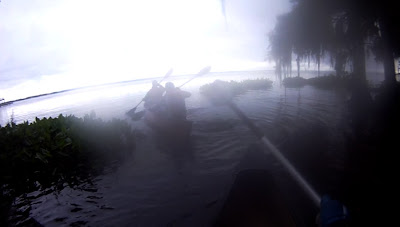 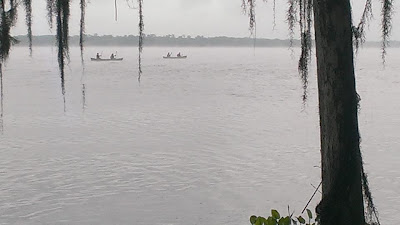 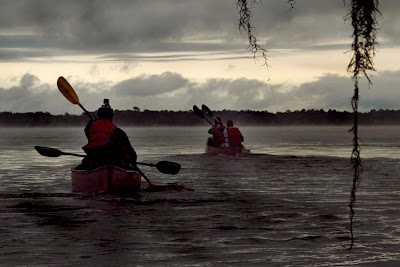 I wanted to grab the northern CP8 first so we could ride the waves the entire length down to gather the rest afterwards.  CP8 was the killer of most all teams.  After digging deep in the area, we headed back out and went north into another channel.  Teams who saw us followed suit as we f'd them up.  The search party executed their hunt here, as well as several other teams, but again with no luck.  We decided to head back to the first channel for a third attempt.  This time, I triangulated our position using the docks nearby and confirmed that this was the right channel.  Then I shot a bearing and said we will truck down anything in our path to the CP from here.  It worked.  In fact, it worked too well, as it was right in front of our face as we docked our boat at the Y-intersection.  We spent a whopping 40 minutes finding this from the time we landed on this channel the first time around.

While paddling through channels with lush tropical rainforest-like vegetation hanging all around us, I envisioned what Indians and settlers saw back in the primitive days of exploration.

locating and tearing our way into CP9

We found the rest of the CPs with speed and accuracy by measuring distance and angles, and adhering to a stopwatch to estimate distance traveled.  Through training, we understood how long it takes us to paddle one kilometer and was able to use that information to our advantage.  Waves churned up and allowed us to ride them quickly to the south.  We saw teams struggling to paddle the opposite direction of us and knew we would have to face it eventually.  Sure enough, on the way back from the final canoe CP12, we fought these intense waves that see-sawed our canoe, belly flopped the front end into the water, and had us caught almost toppling over on a few occasions--all while a cold front rained through to add insanity to the mix.  We laughed it up like madmen.  This was the most epic and exciting paddling I had done in Florida.

On our way out of the Canoe TA, Nate turned up the turbo to max boost and completely tore the chain off his bike.  Robert had spare links, and Bill was a pro bike mechanic, who had him back up and running in no time, even with all of us shivering uncontrollably with symptoms of hypothermia.  During extreme conditions like this, you need calories and you need to burn calories to produce heat, which means eat and move! 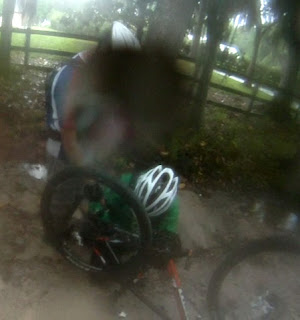 One of the challenge of the race was that you had multiple maps where you had to connect one to another  with varying scales.  The first CP on bike would be off of a trail from the main road.  There were multiple trails that branched off of this road, but knowing Jeff's maps, he will purposely not map all of them.  To counter this, I identified a obvious known road as close to the first bike CP as possible and measured the distance to it via highly accurate technique of 'eyeballing on the bike'.  ~800 meters from this road will get me to the trail I need.  I saw another team stop prematurely at an earlier set of trails, but we continued forward confidently and nailed the correct one. 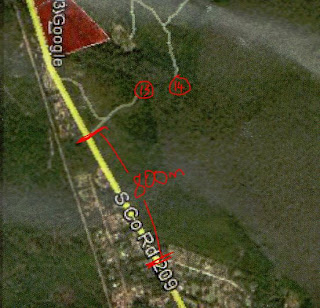 Upon arriving near CP13, we saw another team hunting for it, but we grabbed it first.  Then we shot a bearing towards CP14 for our first bikewhack through forestry.  We must have crossed 3 or 4 swamps on our way over.  The mud was loose, deep, and shoe suctioning.  Several other teams followed suit.  We purposely walked more to the left in order to hit the trail, as opposed to accidently overshooting the trail to the right, which ends at CP14.


CP15 was slightly tough to find, but as usual, trusty Nate honed in on it.  On our way to the trail that led down to CP16, we again saw a team question a trail right before it.  Not us, as we continued forward, not to be distracted.

Once we learned we were the 2nd team back in transition, we turned up our speed and focus.  This leg was the most effective portion of our race.  We had a "Tower Challenge" where one guy climbed to the top of a wooden tower to spot control points that the guys on the ground could not see at eye level.  The guy on the tower had to relay information, via screaming and hand signals to direct the CP attacker towards the destination.

view from top of tower 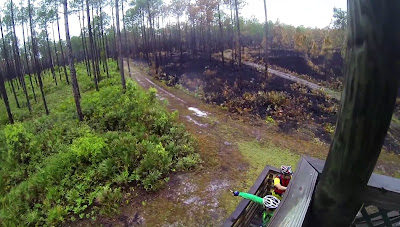 Robert commanded the tower, Nate and Bill hunted the CPs, and I planned our remaining route to complete our team skills.  We were literally nipping at the heels of Team JAX here (overall race winner) with no one in sight behind us.

At the Bayard TA, we looked at the map and decided to take direct bearings to all of them.  From CP17 to 18 to 20, we crossed half a dozen vast swamps.  The environment is what I imagine the FL Everglades to be--it was incredible in a crazy, adventure racer mindset. 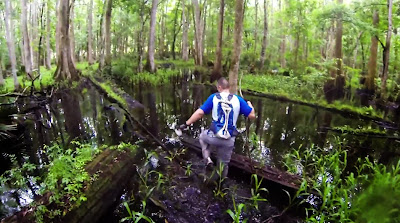 After easily finding CP21, we had just two left.  We must have had an hour lead over the next team at this point.  However, just when things were going so perfectly, we ran into a fatal mistake that cost us 50 minutes.  We erroneously ran up the trail towards CP23, hunted forever to find CP22 but somehow found CP23, thinking it was 22.  And that snowballed and contributed into a period where we dropped four places finding the next CP23 that was never there!  NOOOOOOOOOOO!

Once Robert found us CP23 again, Bill finally realized our mistake and it was off to find CP22 again.  The morale quickly plummeted as we had no choice but to continue doing what we needed to do.

We jogged to Bayard TA and then biked back to the Main TA to finish in 6th place.  It was demoralizing yet very encouraging to the team to know we had 2nd place just about the entire race until the second to last CP.  We were proud to see our split times were fastest in many of them.  After a finish like that, we discussed what went well and blamed Javan for everything else :D

See you guys in Blue Ridge, Georgia next month at the 30hr Atomic AR!  We'll be ready!