You can count on either rain or floods at the Dixie AR.  This year, we had floods that made it fun and dirty for adventure racers!


Prologue
Jeff Leininger spread the pack out at the start by having us find 4 easter eggs, scattered about at the start.  We were one of the last teams to find all 4, but hey, Canyoneros like to give others a head start ;)


Run 1
We took a counter-clockwise approach to finding the controls.  We had a little trouble following the trails towards CP3, but eventually found it.  At CP1, I tried to take us on a bushwhack to the west to a smoother, more hard-packed ground, but what started as clear woods got denser and filled with thick palmettos the further we got in. 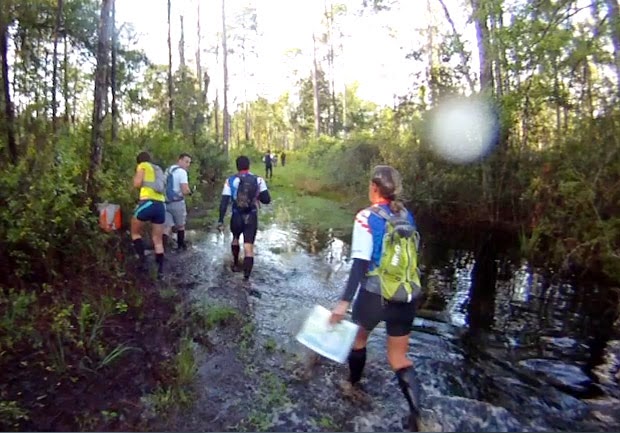 these poked me in the eyeball a few times 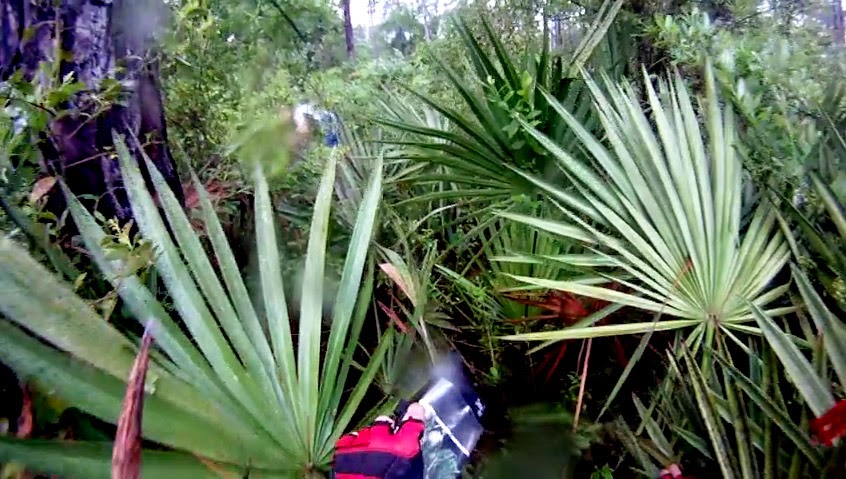 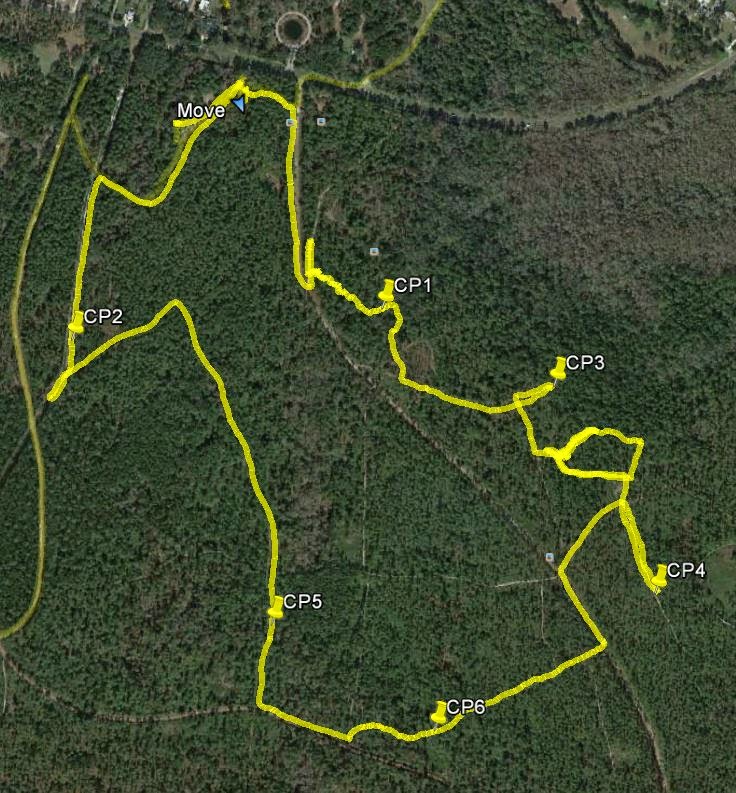 Canoe
The canoeing leg had you paddling along the shoreline of one of the widest sections of St. Johns River.  Last year, there were massive wind gusts that made it quite exhilarating.  This year, it was much calmer. 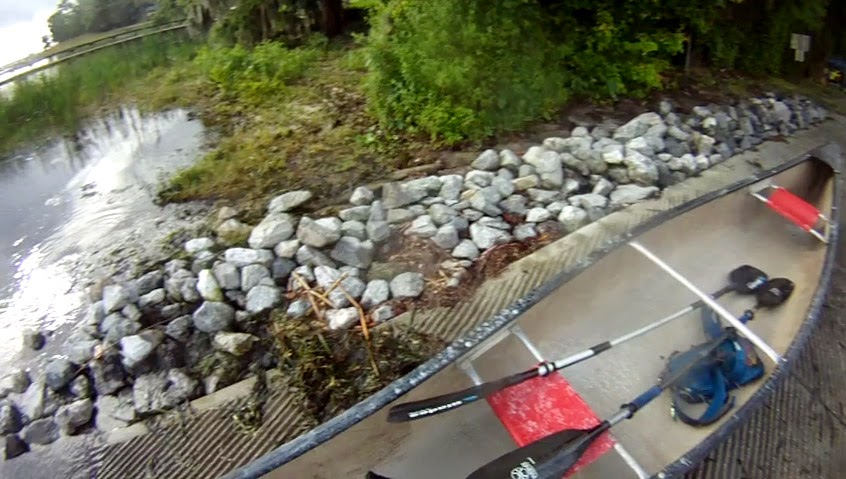 I tried to find the trail that led you south to CP13, but could not find it.  We eventually docked our canoes a couple hundred meters south of it and bushwhacked our way towards the clearing. 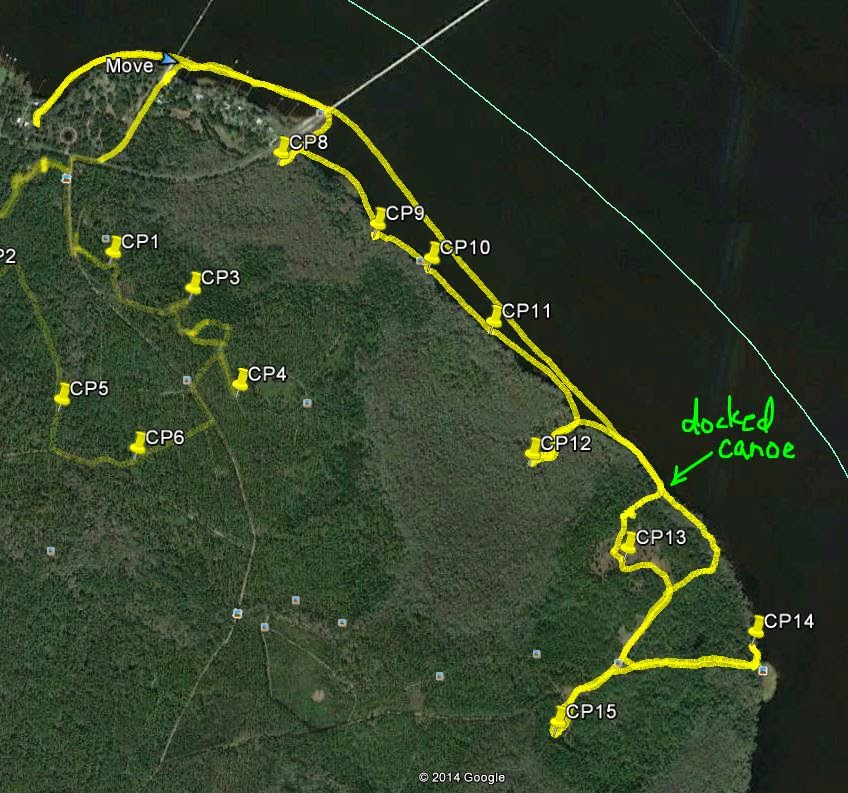 There was a herd of teams finding CP13, 14, and 15 together.  The stacked lineup of great teams kept the race amazingly tight 2hrs into it. 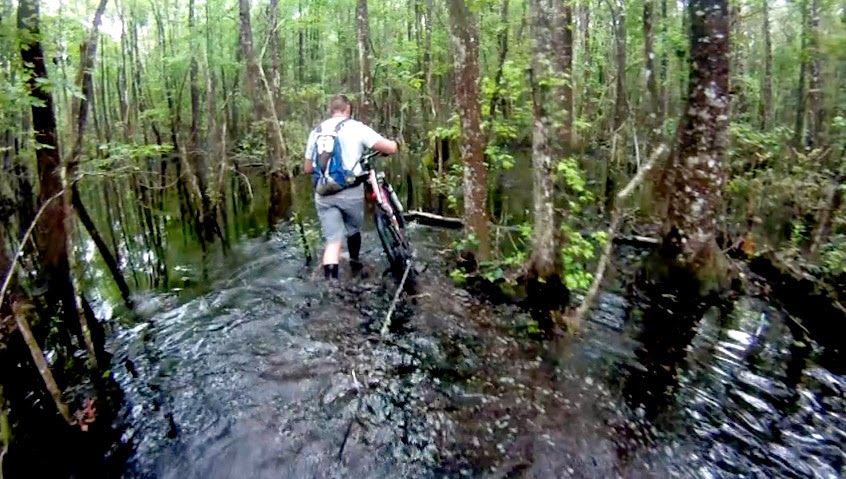 CP18 and 19 gave us a 58min loss.  On paper, these two CPs were the kind you wanted to approach precisely, making exact measurements, utilizing the pedometer, and keeping track of the trail turn-by-turn.  It had no clear attack point.  The clue was "creek" for both of them.  When Nate and I go surgical on a control, it can become apparent how accurate we can be in our GPS route (seen in red and yellow lines below).  We dropped the bikes off on the trail and bushwhacked south.  Once we counted paces into the forest, there were two sets of creeks running east to west at the plotted CP18 that we scoured a massive area on, but no controls there!  Maybe it was missing?  From there, we took a direct route to CP19 and again, found nothing.  As we called the controls off and headed back some 200m east on the trail, we spotted a creek that ran north to south.  Nate said give me a couple minutes to poke in just in case, and that's where we found CP18.  Knowing that, we took our bikes south and did the same with CP19...the fatal time hit of poorly plotted controls ultimately knocked us down 5 ranks.


the actual control was 165m away from the plotted point :( 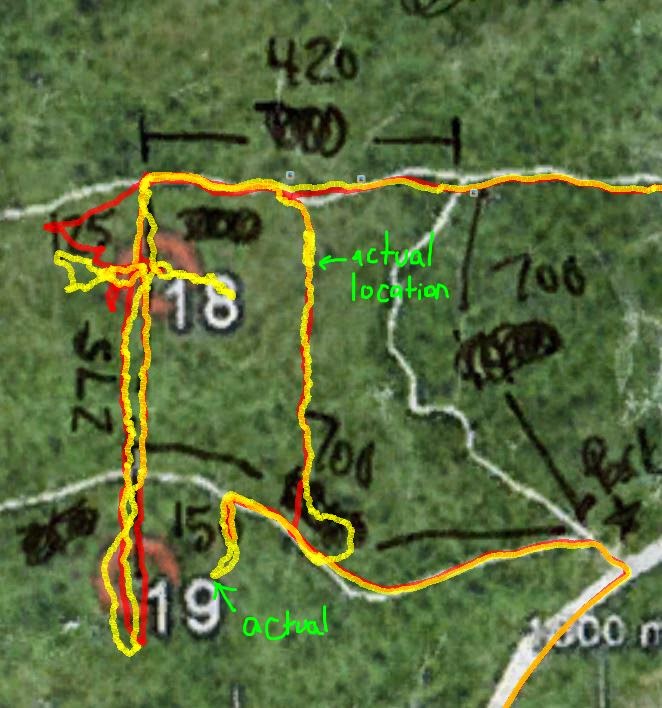 Here's another example of a poorly plotted/placed control at CP24, almost a whole football field away.  The kink in the trail confirmed a clear attack point for us, but unfortunately, it was no where near there.  We found it on the way back after team Crew Zen graciously tipped us when we found and gave them their lost punch card. 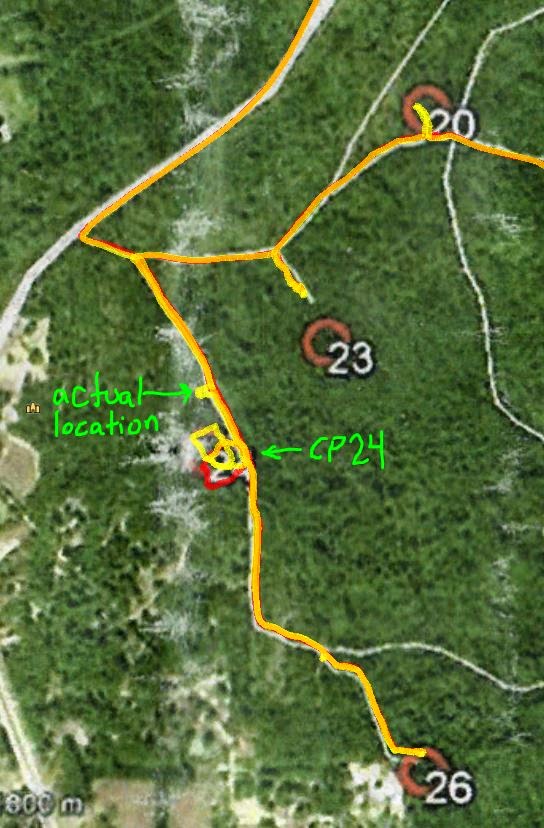 The rest of the controls were marked by biking in areas we should have been in canoes with.  Nate did an awesome job of sniffing out the more hidden CPs.  Here's a video of the flooded conditions :)

Foot 2
When we arrived at Bayard TA, we were told we were in 14th place.  One of those races, I guess.  As I tried to pinpoint these with efficiency, the mind was dying and the legs cramping.  At times like these, I can make some stupid mistakes, like when I had the map folded in a fashion that covered up CP35.  So we skipped it and I did not realize it until we were a kilometer away.  When it rains, it pours, so back we went.  Surprisingly, our constant pace allowed us to improve a few rankings up on this segment. 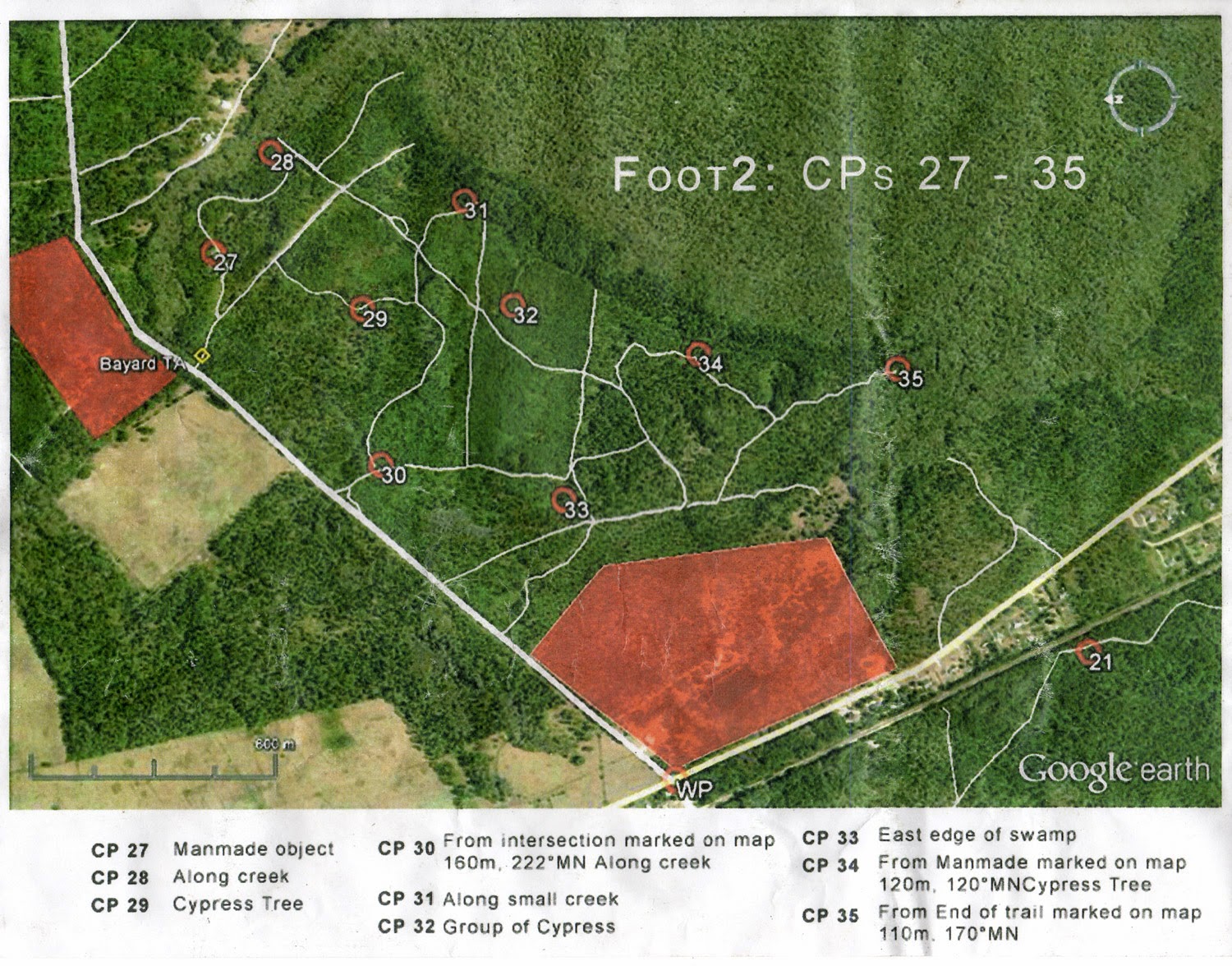 Bike 2
This section was supposed to be just a simple ride back to the Main TA, some 4 or 5 kilometers.  I looked at Nate and asked him "what do you have left, Nate?"  It was punctuated by a high-revving chase we gave Team Disoriented :) 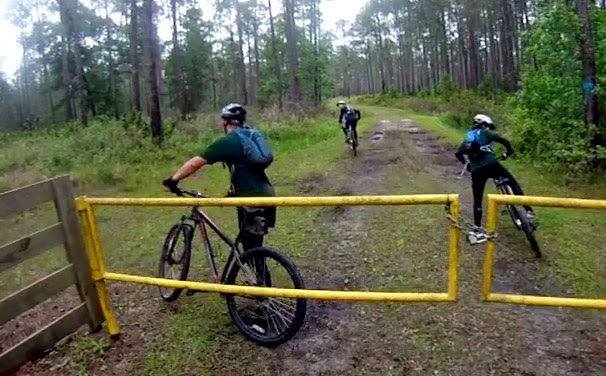 We caught up to them as they just hopped a yellow gate and I jokingly gave them a friendly scare by claiming "we're the Boogeymen!"  Seeing us this close, they appeared to book it too, and this became the start of a finish you hate to go through!  It's painful 5hrs in, it's dreadful 8hrs, and it's especially excruciating at 9 haha.  Everyone was beat.

I kinda knew what trail we were on, but Dave from Team Disoriented eventually stopped to gather his bearings at an intersection.  This is where we passed them.  I didn't have the right map showing, so I just had us blazing forward on the large known path.  In my mind, I thought we were on another large trail east of us, which would come back to haunt us at the end.

Halfway to the finish, I drafted Nate and accidentally clipped his rear tire, sending Nate and I off our bikes.  My legs instantly locked up in a ball of furious cramps that I could not reverse on my own power.  I had to completely dismantle, take a few moments, and use my body weight to reverse it.  Nate also spiraled into cramps of his own.  Sport teams nearby looked at us in horror, wondering what just happened.  I took one glance back and saw three green jerseys bolting our way.  "Get back on the bike Hien!" I frantically mumbled with crippled legs.  Good thing we had switched to biking shoes for this last segment.  I was able to make full use the upstroke to make up for the cramping down stroke.

At the very end of the large trail near the gated parking lot, I looked for a trail I thought was to the left of us.  There was none, and it finally hit me that we were on a trail to the west of the Main TA the entire time!  Needless to say, we faked Team Disoriented out, as they followed us to the end.  Sorry for the adrenaline rush guys!  :D 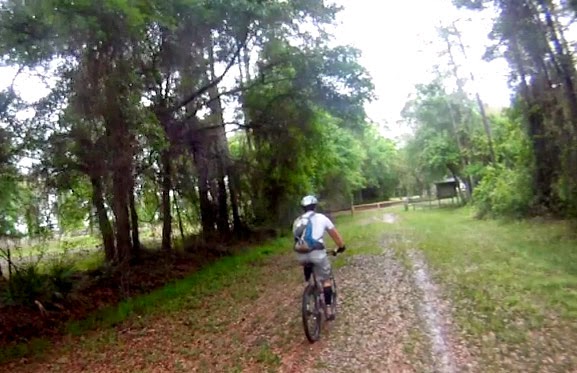 We finished 10th overall after traveling 28km on bike, 8km on canoe, and running a half marathon.
Posted by Thoe99 at 12:33 AM 5 comments: