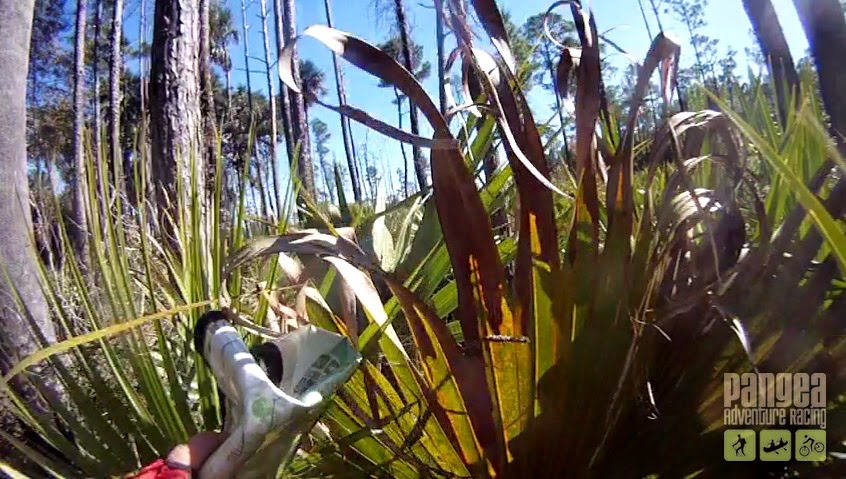 The Turkey Burn of 2014 marked the final Pangea Adventure Racing event.  It was held at Wekiva State Park.  Temperatures dipped in the low 40s as we drove out there around 1am.  Cold always means higher endurance for us.

Dave Brault designed a unique prologue for us to do.  We had to disassemble the front wheel of one of our bikes, run in opposite directions in a predefined trail loop, meet up, reassemble, and then head off into the first section of the race.  Also unique to this race was that we were receiving maps at the beginning of each section, which took pre-race planning out of the agenda. 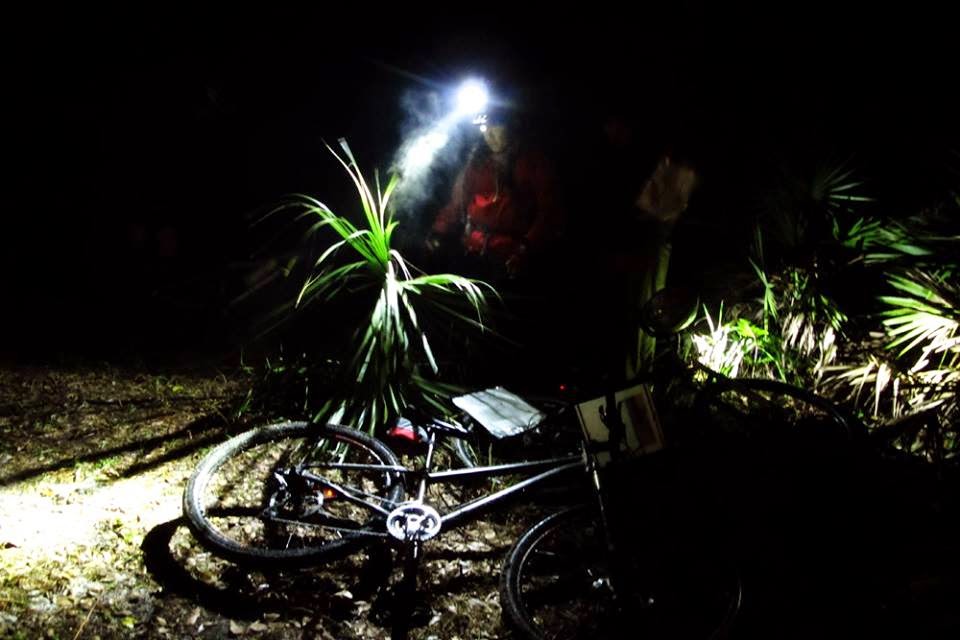 Foot 1
We picked up one CP while biking over to Wekiva TA.  Once at the transition area, we switched to foot and started finding five controls with everyone in the dark.  When you have a massive pack to start, there's really no issue in finding them.

You can reference maps on team Nature Calls' blog.

Bike 2
Nate and I made a quick transition to bikes and starting making our way to the front of the pack, near team Endeavor Racing and Florida Xtreme Hunter.  There were five more controls to visit on bike, most near intersections to keep things fast and flowing.

Canoe
We were the second team heading into the river, embarking on a very long paddle section.  Rock Springs Run can be hard to navigate with its more subtle features, so I'm assuming that's why we did not have any controls on that river until about 5km later, at CP13, which was 200m from the Wekiva River.  Out of sheer luck, as I called for us to rethink where we were to snap us out of monotonous zone, Nate spotted the control immediately.

We slowly inched our way closer to team Endeavor, but at the far end of the river, where CP20-22 were, they found them much faster than we did and gained another 5 minutes or so from us.  Nate and I have paddled these two rivers for years.  It's literally our backyard.  We ended up with a time of 3hrs 37min, tied with team Endeavor Racing for the fastest time.  It was the best paddling I can remember us ever doing, for this long.


dawn on the river 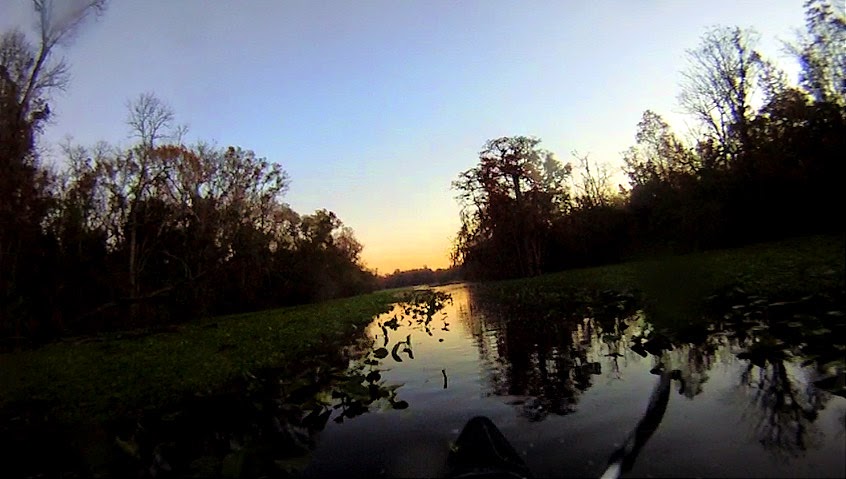 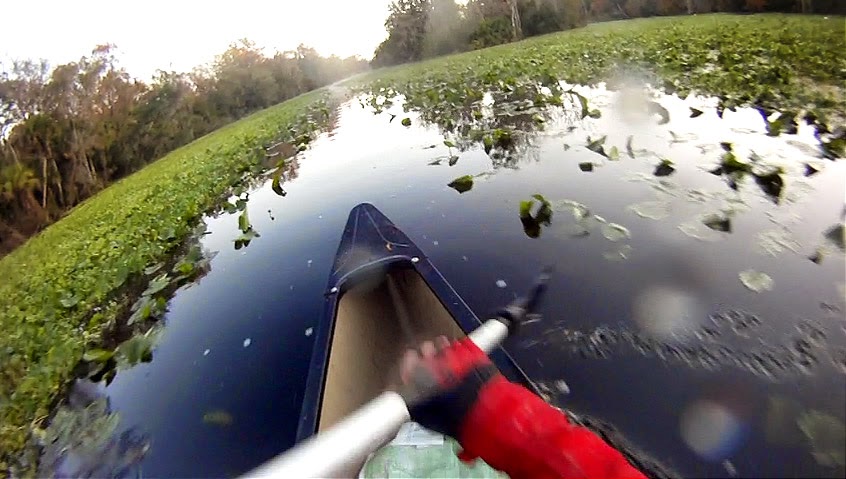 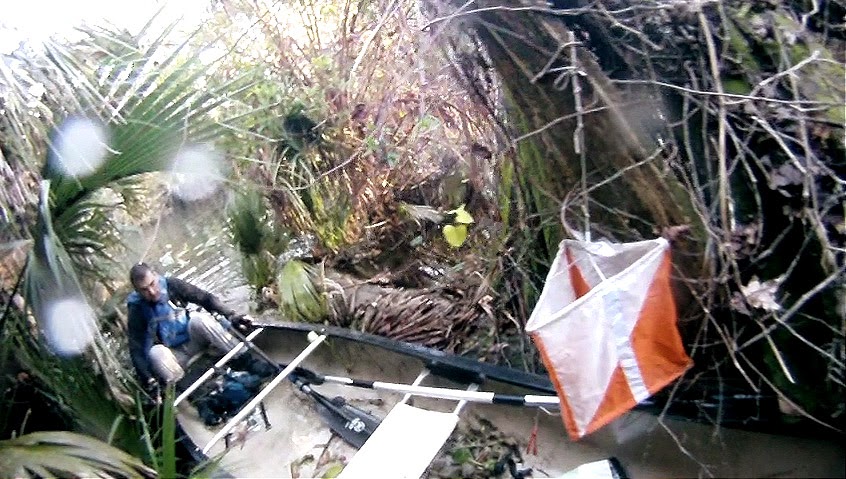 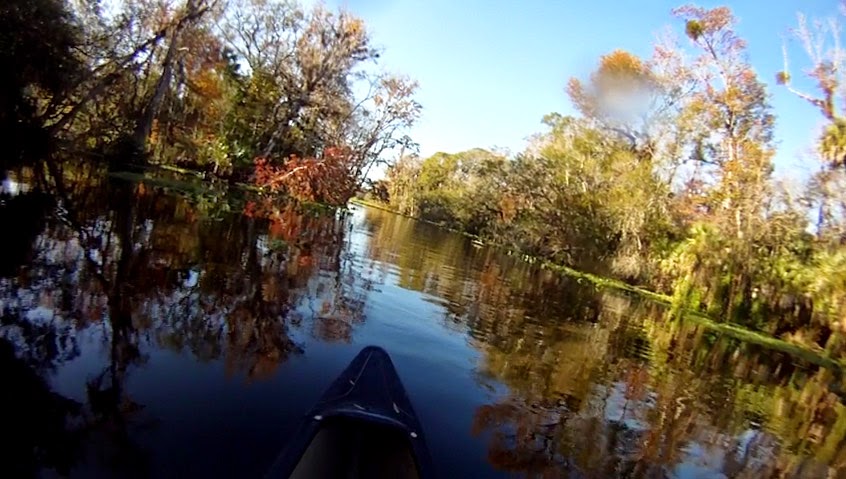 Foot 2
We were in second place all the way until CP27, where my GPS reported we spent close to 30 minutes trying to find this control.  We initially attacked in at a distinctive north trail bend (on the east) and then re-attacked at the upper northwest intersection.  This is where teams caught back up to us and we worked together, but after a while, Nate and I decided we had spent enough time here.  With 55 controls set out, we had to average one control per 13 minutes in order to clear.  We heard later that other teams finally found it, either while bailing out or by sheer determination.

CP36 was the last of the controls on this leg.  It had a tough bushwhack going in, and a memorable bushwhack going out.  The exit had us going through some tough vegetation.  Nate and I frequently bike Wekiva along their 8 mile loop and always wondered what it would be like to find controls in the vast fields of palmettos that take over the land after a controlled burn.  Now we know...there is no flat ground haha.  It is filled with palmetto root, razor bladed stems, and tough rigid twig-plants (that's the best I can describe it).  This was enough to put all the bruises, cuts, and blood on us for the entire race, despite us trying to follow the edge of the swamp and palmetto vegetation.


the elusive CP27 and our hunting area 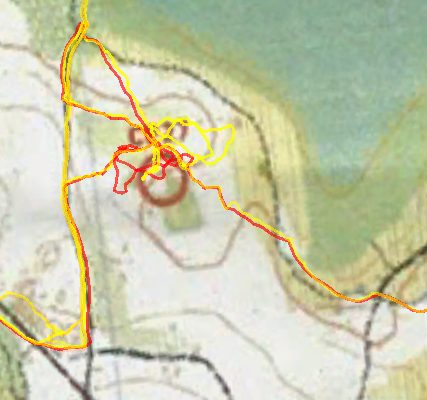 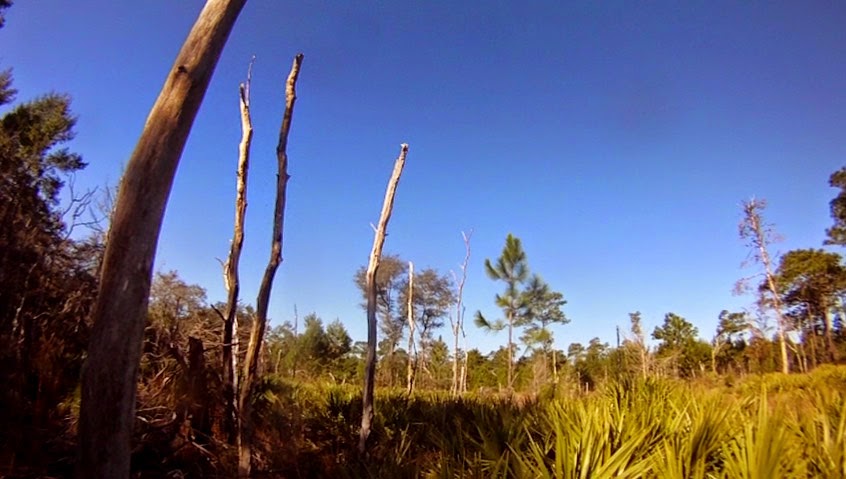 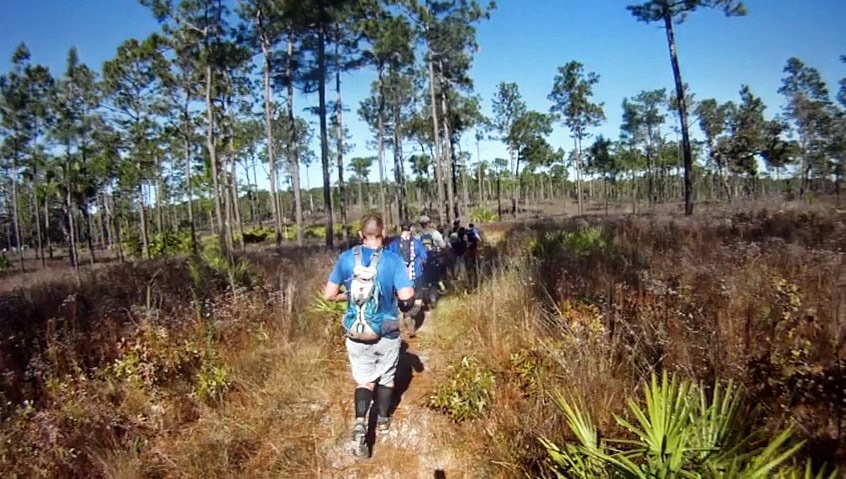 happens to me at least once a race, while concentrating too hard on the map 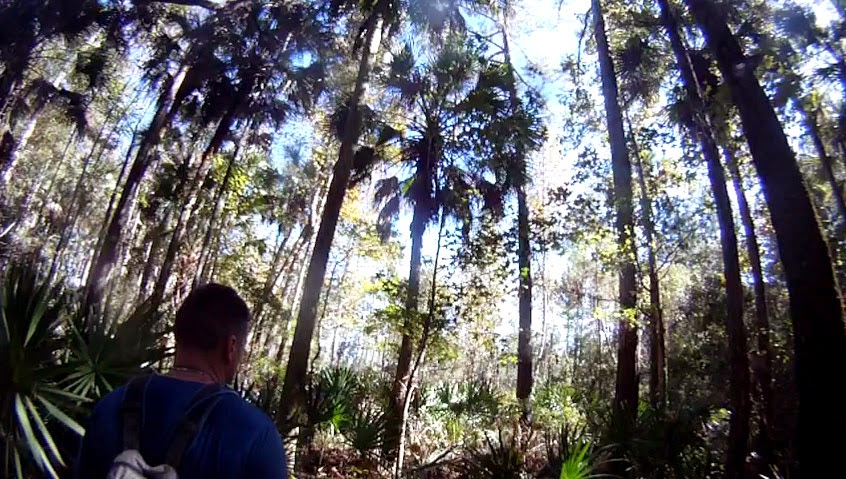 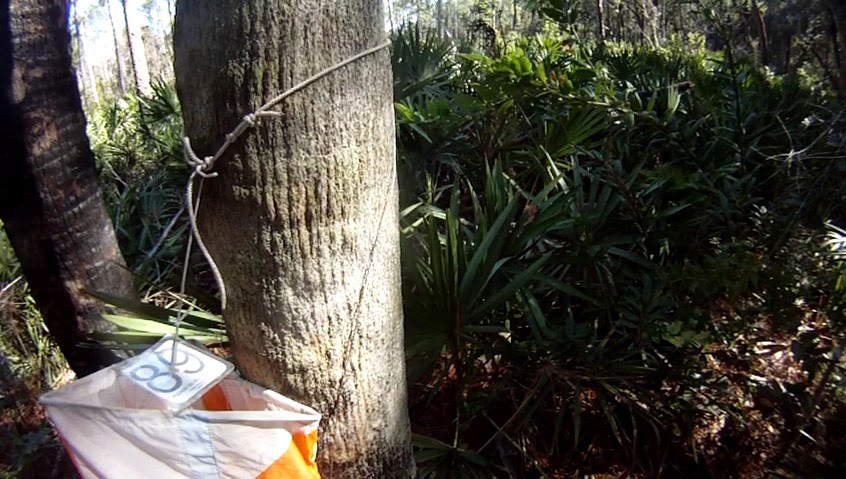 Bike 3
We headed back to Big Buck TA to head to Rock Springs Run State Park  It started with crossing Rock Springs Run river with our bikes and punching a control we had previously punched on canoe.

I had biked here once to train and it was sugar sand heaven, or hell, depending on how you enjoy it.  We found a couple controls before we converged again with Florida Xtreme Hunter and Honey Stinger, where they were debating heading back due to time constraints.

Here, we were presented with the option that would determine the race for us.  We knew if we headed back with them, we would lose by 1 point to them, due to us missing CP27 before.  We started gambling with decisions now, and I called for us to find two more biking controls, while finding shorter routes back to Wekiva.  At first the shorter routes were only slowing us down by a little bit, but as the route continued, conditions got muddier and messier.  Then it got overgrown and we were slowed down to a crawl.  This is where we knew we had botched the race.

There were two more quick controls to pick up on the way back to the final transition area.  Luckily we ran into another team at the final biking CP47, who reminded us to go to Wekiva TA, not the Start/Finish TA.  I had already been biking to the Start TA before Nate called me back. 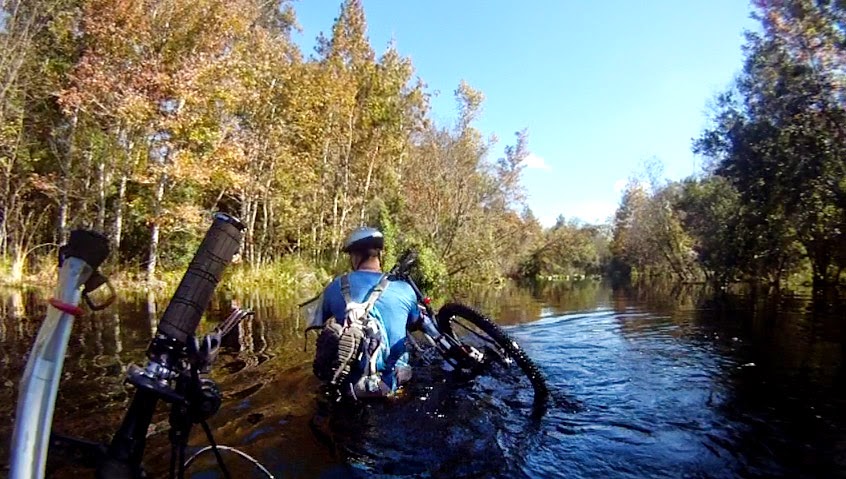 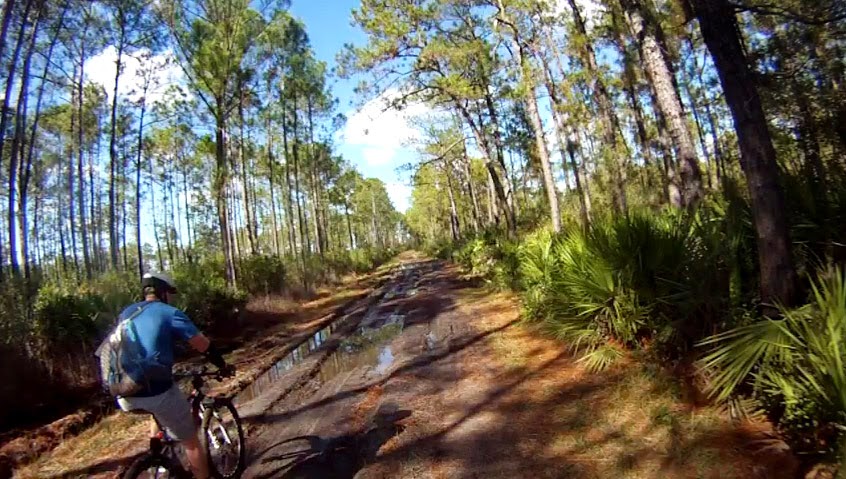 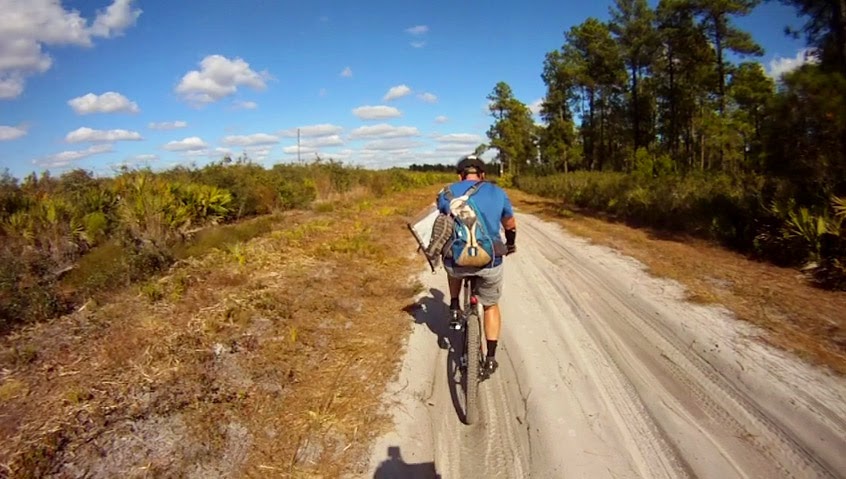 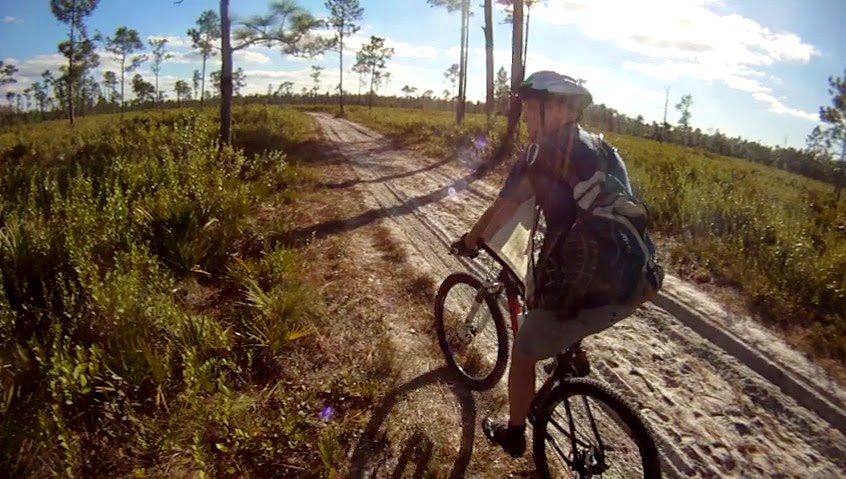 Foot 3
We rushed to Wekiva TA with time ticking and smoothly transitioned off to find the lower four controls, which were the exact ones we found in the morning.  They were much easier in the day.

During the race, our stop watches had occasionally paused here and there, bouncing off the wrist, giving us an erroneous readout of how much overall time we had left.  Once we figured out the real time left, we realized we were wrong by about 30 minutes and had to scramble even more.  At that point, we knew we'd run late, so I called us to find two final controls, knowing we'd go overtime--I just didn't wanna go over the 10min 2-point penalty period.  The last control only chewed up about 3-4 minutes, so it was a gamble whether or not it was worth it (turns out it didn't really make a difference in the standings).

The bike back to the Start/Finish TA was fast to say the least.  We took a known path along the 8 mile loop we usually go (west of Wekiva TA to the horse coral) and then road back on paved roads for the 2nd fastest time (18:50 min) behind Team America.  Most teams took the south road, but from morning memory, it was deep sugar sand and so we gambled again on the other end.

plenty of razor-stemmed and pointy palmettos 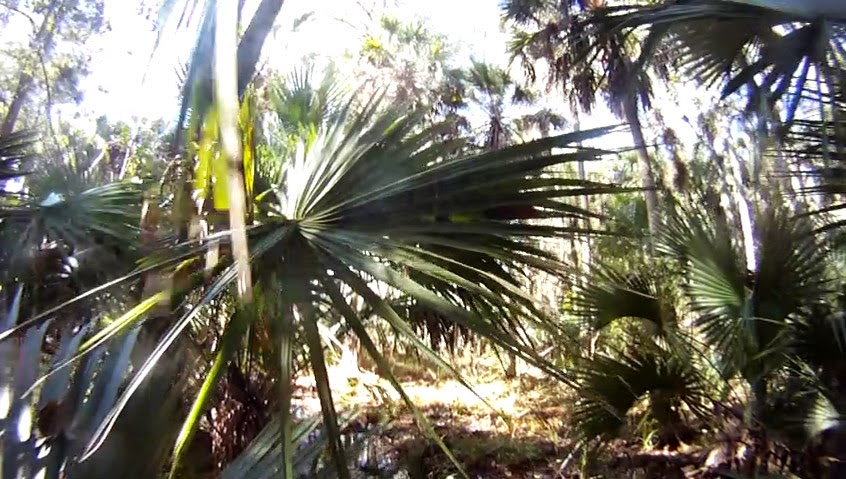 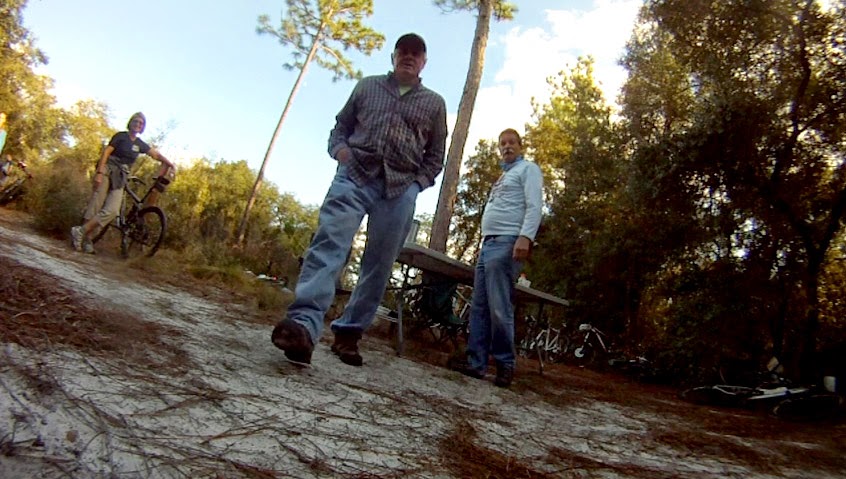 All in all, we had a great challenge of a course.  When you don't have all the maps at first, you never know how your decisions will affect the end.  We gambled here and there, some paid off, some didn't, but that's how it goes with adventure racing.  We were suprised we still ended up 5th overall.  Big congrats to team Florida Xtreme Hunter, who made great decisions and took the overall top spot (also sports the youngest racer in the elite race).

In light of this, adventure racing will still continue with Florida Xtreme Adventures!  Keep going outdoors! 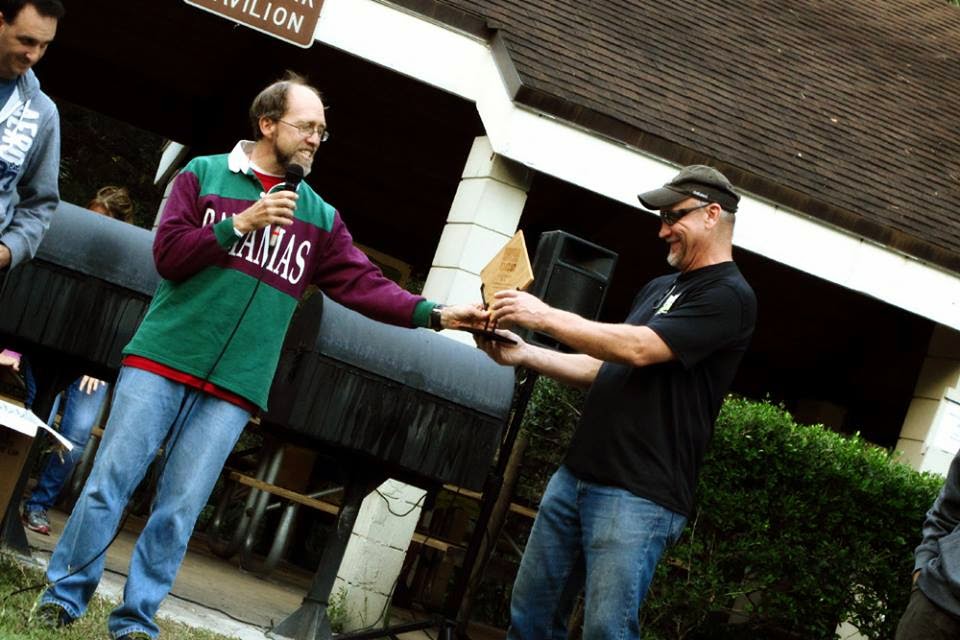