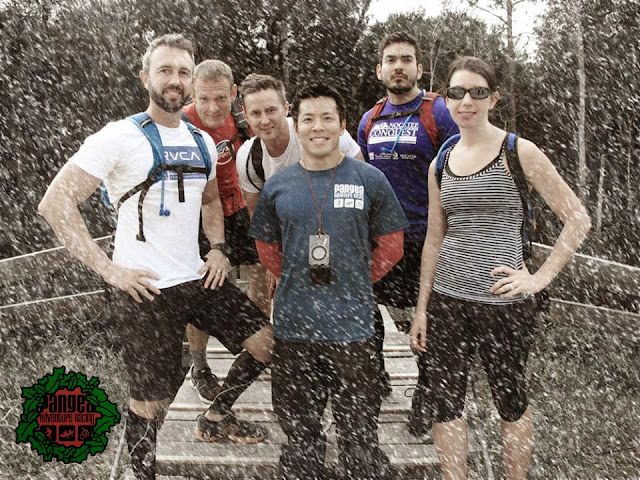 This race brought out all the original Canyoneros and was agreed to be one of the funnest race we've had together.  Everyone was in high spirits as they made their return to adventure racing in the Christmas AR.  The lineup included (left to right) Brian Ruth, Russell Barton, Greg Watson, Hien Nguyen (me), Juan Chavez, and Amber Punga.


Foot
The race staggered the teams 30 seconds at a time, so we all waited for each other on route to the first CP before racing it as a giant group.  "Flyin" Brian shot out the gates after a few cups of coffee and a Redbull.  With guns blazing, he instantly became my go-to man for punching controls for the whole group.  Juan immediately rolled an ankle five minutes in while running over the boar-dug ground. 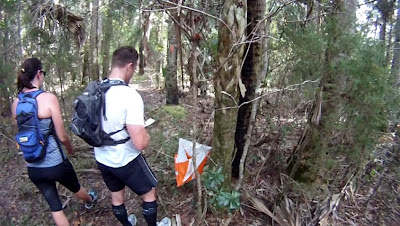 I measured out just about every distance we would cover on this leg and navigation proved flawless.  We ran the route clockwise, slower than our normal race speed considering the size of the group, but the route choice and pinpoint accuracy ultimately gave us the third fastest time for this leg.  Here's our recorded GPS route on this leg.


nice shortcut from CP2 back onto the Yellow trail 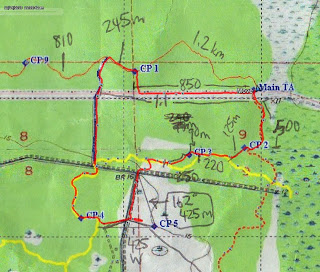 CP3 had a challenging attack point, but if you counted paces and kept an eye out for a south bend in the trail, it was noticeable.  You also had to look at the Google maps provided before the race to know that there are some distinctive features at CP3, namely the open field it bordered.  Heading out of the last CP1, we bushwhacked directly south to get out on flatter, more direct road back to the Main TA.


Bike
There were numerous options to be strategized on bike.  Some teams rode all the way to St. Nicholas Ave for CP6 first, maximizing speed.  One team I heard went up the white trail to get CP7, 6, and then the rest, thereby cutting distance down. 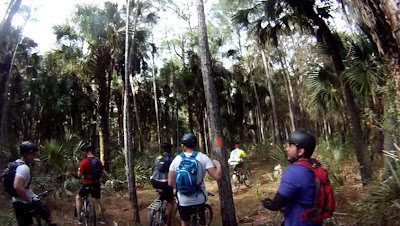 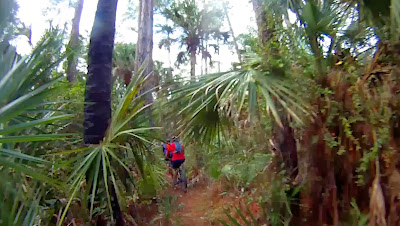 I had planned a route that didn't require bikewhacking at first, going counter-clockwise, and staying on the red trail until CP6.  Two reasons...1) CP8 looked like it was easier to locate an attack point from the east, 2) I wasn't sure if the trail at point B existed in real life.  Later on, however, with the trail conditions putting a pounding on the teams, I knew we had to cut some distance out.

everyone feasting at one of the controls 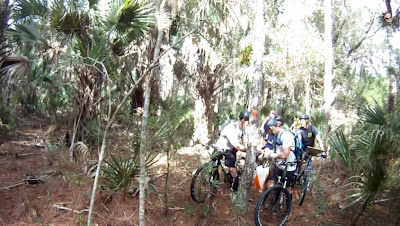 CP8 ended up being found by an easily identifiable marsh.  We had been having so much success thus far, so upon leaving there, I measured what it would take to bushwhack onto the white trail to get CP7.  Greg and I were the strongest biking team out of the three teams, so we stormed ahead to identify this point at which we would cut over.  We rode about 1km, slowed down, observed, and waited for the trail to bend north.  As soon as it did, the other guys caught up and we slithered into the forest.  The trails can be faint out in Tosohatchee, but with 6 set of eyes, we were able to see anything. 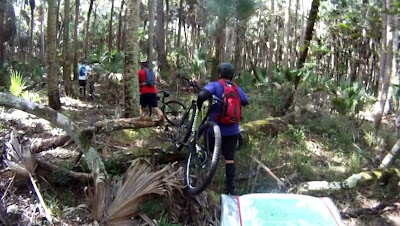 CP10 was also found in similar group strategy as before.  Greg and I bolted ahead, located the control, while the other two teams caught up.  We had no mistakes on this entire bike leg. 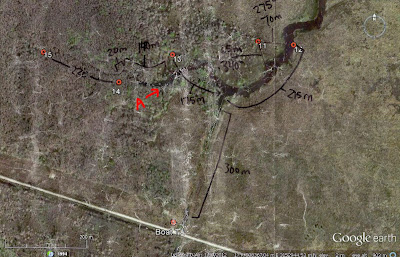 A short bike ride to the Boat TA started this leg off.  We had to trek through some nasty mud before picking up our boats near the river.

We almost blew by CP12 due to how well hidden the control was.  We DID blow by CP13 due to map scale (I'm not used to paddling so short before the next CP), but decided to pick it up on the way out. 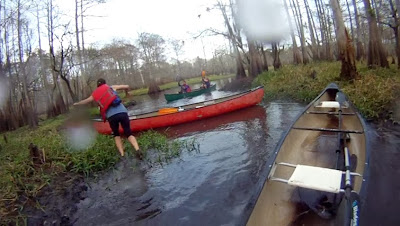 Map scale again got me, as we docked our boats way too soon to find CP14 (point A on the map).  It was my only mistake on the entire course that costed at least 5 minutes, but Brian and the search party backed me up well with their foraging technique of hunting.  In fact, in the past, Brian's been known to uncannily sniff the CPs out to make up for my mistakes in navigation.  I had my shoes suctioned out five times in some of the muck we went through on this leg.

spearing other canoes in spontaneous battles of jousting is a sign of canoe dominance.  more points for t-boning 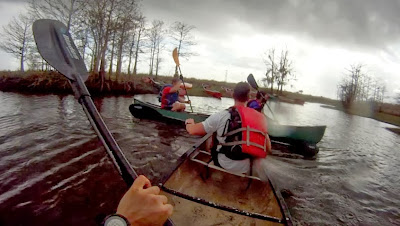 From CP14, I shot a direct bearing to CP15, counted the prescribed paces and stopped for them to fan out. However, "The Barton" was first to realize the control was immediately to my right.  On our way there, the scene was really surreal (pic below).  The brown line you see is not the horizon.  The water actually rises up to that line and caused a permanent stain on every tree.


this is what Christmas looks like in the swamps of Christmas, FL 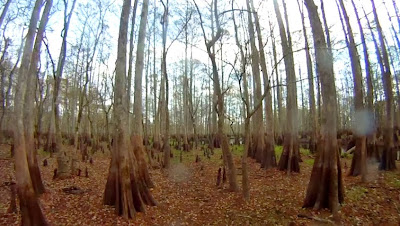 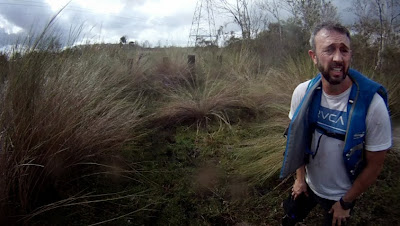 Amber pulling the canoe by herself with mighty girl power 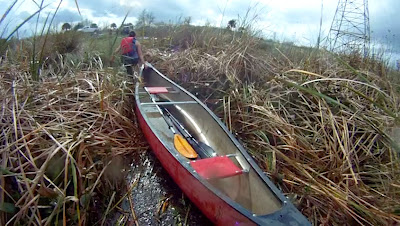 There was a 250m canoe portage we had to do from the edge of the river to the main road.  Here, Brian's legs locked up to cramps, and we ended up towing him back to the Main TA and finished 6th out of 33 overall!

Big props to team We Blame Javan for taking third overall.  We'll be racing with them on the next two races, including the epic 72hr Sea to Sea AR, under the name "We Blame Pangea"!
Posted by Thoe99 at 6:05 PM No comments: