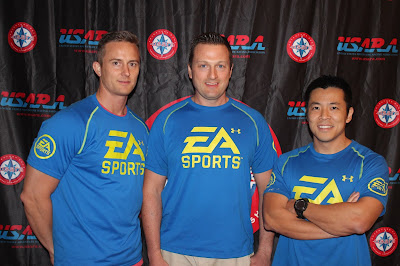 The tires of our front wheel drive Ford Explorer were spinning along a windy wet and paved road that took us uphill into the lodge in Pine Mountain State for about 4 miles.  We joked and asked, "what if we end up having to bike up this quad-ripping route?"  We were one of a handful Florida teams who qualified for the championships, but nothing prepared us for the terrain ahead, except Kelly's awesome spin classes at the RDV.  Sure enough, this seemingly unending ascension into higher altitude was just a tiny fraction of the race, thrown in at near the beginning of the race.

The night before the race, there was a serious meeting in the conference room of the lodge we stayed at.  We looked around and understood that these were many of the best adventure racers in the US.  It was great to see some of the teams we had tracked and rooted for at other big races throughout the years.

We woke up early the next morning, had breakfast and spent 1½hrs plotting CPs on the two maps we received.  We had two Canyoneros - EA Sports teams confirming points off of each other to ensure accuracy.  This was the first race we had plotted a substantial amount of controls for, and we needed the entire time to do so.  There was no time to mark a route or strategize a plan.  We did all of that on the fly during the race.  This scenario was a first for us, but we enjoy figuring out new challenges. 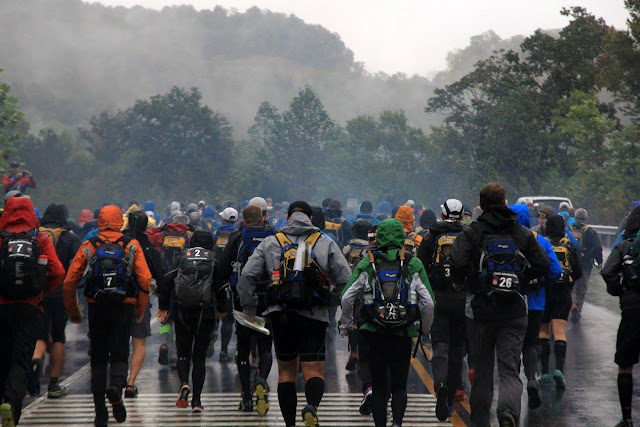 We then loaded up on buses and were dropped off at a bridge looking towards our first set of mountains.  The race director gave us a map and we quickly developed a plan to gather two controls to equal the required ten points, CP 4b and 6.  Starting in the back of the pack in no hurry, we naively followed the mass towards CP6 into an erroneous trail that lead us uphill.  I thought surely that many national-level racers cannot make that badly of a mistake in a prologue, so I had turned my navigation thinking off.  That bit us as, we burned about 25 minutes looking for CP6 in the wrong spot.  We spotted a river and a house that I did some reverse bearings against to realize we were nowhere near the right spot.  The only way to correct that was to backtrack out to the trail head, and once we did that, I knew exactly where we were. 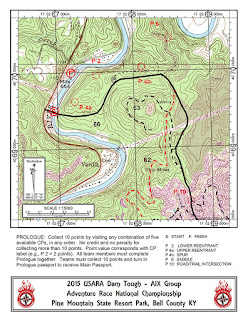 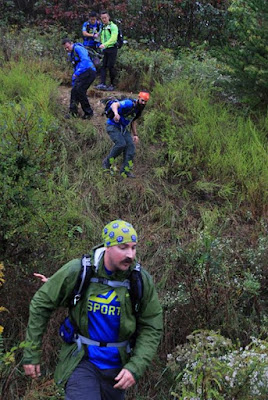 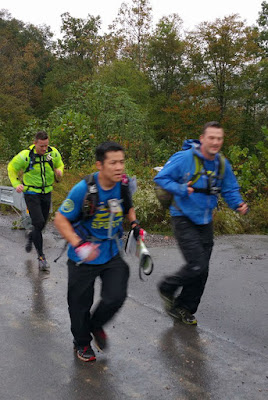 As we made our way back to the location of the bridge where we had previously dropped off a bag of paddles I counted 9 bags left from other teams.  There were 58 teams competing this day, so we started off in 49th place.  That was frustrating to me, but it was great to have teammates who are always encouraging ourselves out of the lows. 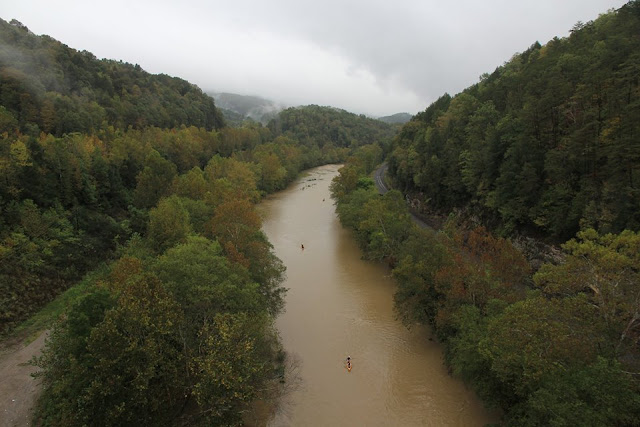 Once we jogged to the boat take-out with our paddling bag, you had to carry your canoe about 50 meters to the river.  Being near the end of the pack now, we had last choice in canoes, and the ones left had broken handles, which made things more difficult.  The route was rocky, slippery and even had a section where you trekked uphill on a slippery slope.  Team We Will Survive, with two ladies and an older gentleman, appeared to have trouble carrying their canoe over the obstacles and up the hill.  Greg graciously helped them up, carrying canoes in each hand. 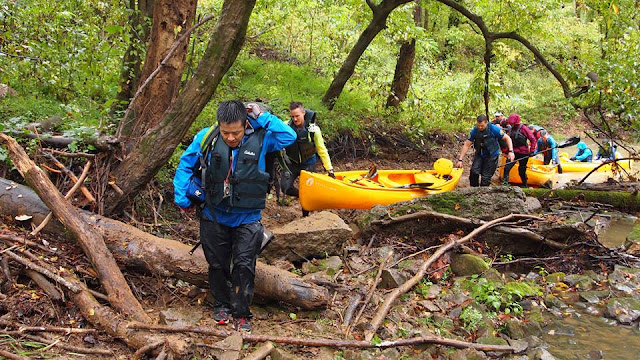 The paddle was pretty short and easy, but for some reason, we could never get our steering as straight as we liked.  We felt better as other teams reported the same.


After the paddle, we jogged over to pick up our bikes in another location, an outdoors amphitheater that had seats made out of boulders.  Here, we set off on our first brutal uphill climb that we had joked about.  This section was deemed "king of the mountain" and was a timed section to see which team was the fastest.  We obviously had no intentions of winning this :) 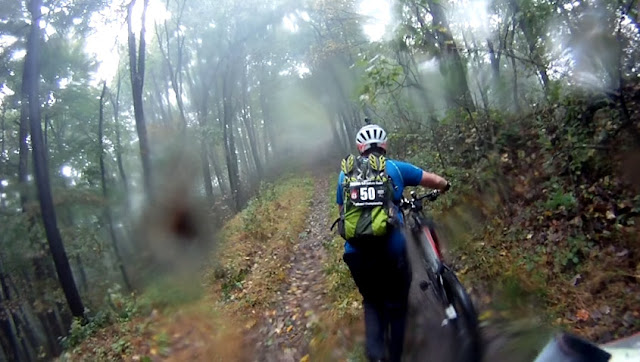 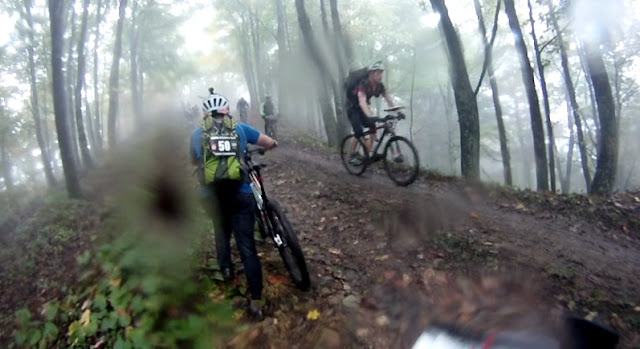 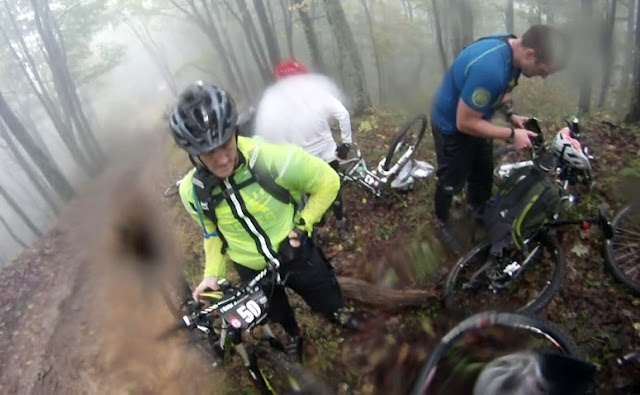 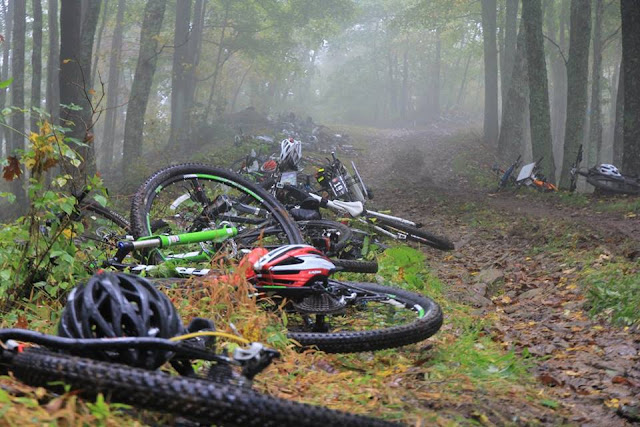 The next section was a trekking section that took us deep into the bowl of a mountain region.  I relied a lot on Nate's experimental pace counting strategy.  He had figured out some method of pace counting that takes into consideration the angle of elevation and wanted to use this event to fully calibrate his algorithms.  It was quite genius and highly accurate, in fact.

To get some of the non-racers up to speed, one foot step while jogging is roughly 1 meter.  So when I measure 100 meters of distance on the map, it's a "as the crow flies" distance.  We can jog 100 steps on flat ground and it will roughly be 100m in real life.  However, it does not take into account elevational changes.  When you traverse up and down hills and mountains, it may take 150-180 steps to reach a measured 100m from the map.  It's highly variable.  Nate had this all figured out in his head; it was genius!  This especially helped on CP7, where you could have easily and painfully gone up the wrong re-entrant since there were two side by side ones.

As we wrapped up this orienteering leg, we ran into team We Will Survive many times, who seemed to effortlessly traverse up and down the mountains.  They were always able to more intelligently spot the easier way around an obstacle; we just thick-headedly endured through the steep areas.  It was amazing to see and we hope by the time we reach their age, we could still be at their fitness level. 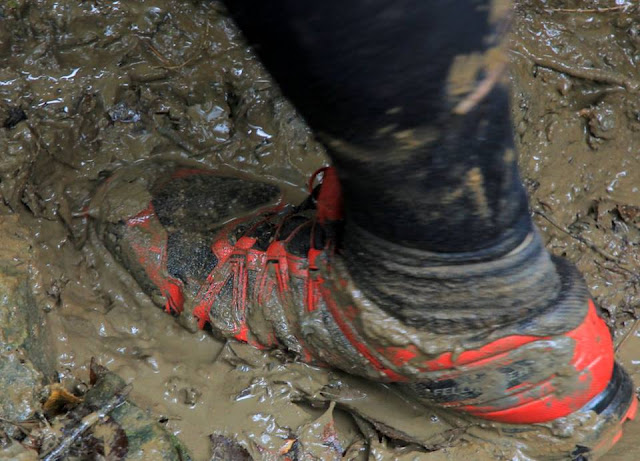 The next leg was the forewarned long biking section.  I think we spent over 11hrs on this route, starting with CP9.  Coming down the mountain of the previous trekking leg, we had run out of water and needed to refill somewhere.  One option was going back to the lodge, but that kinda threw the line choice off.  I busted out the map with the rain pouring down hard and tried to see through the debris that had smeared across the map.  I frantically found a route that cut back to the amphitheatre we came from earlier, which would give us access to a bathroom with water.  It was a primarily downhill path, the opposite of what we suffered through earlier.  Also, worthy to note is that much of my on-the-fly navigational route choices came from the first route that I could connect.  I had to quickly locate and commit.  Luckily, upon review, they were the best routes we could have chosen.

The biking was a pure slog.  This section basically summed up the entire race.  It was rainy.  It was cold.  There were lots of pushing the bike uphill.  There was mud, mud, and piles of mud!  Even the stretches of downhill weren't a pleasant coast.  It was a death-gripped, drifting wild ride.  Somehow Nate's performance increases exponentially in the cold and wet.  At one point, Nate fell into a ditch full of muddy water up to his neck :D  Night racing always has this eerie awesomeness to it when you're out in the middle of nowhere.

Surprisingly, we didn't run out of water during this 11hrs.  If the temperature was warmer, that would have been much different, and there's no way we would have sourced any water from the ground around this area.  The race director warned us that there were mine fields all around, which probably had chemicals leaking everywhere.

Night fall passed and we finally made it to the canoe section.  Here, there was real food sold in the building of a water treatment plant.  They even had the heater turned on in the warehouse!  It felt nice and warm in there.  The canoe section was very short in a small lake, not that I'm complaining.  It contained the best bang for the buck CPs. 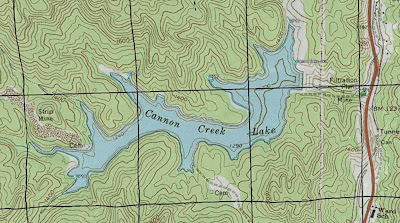 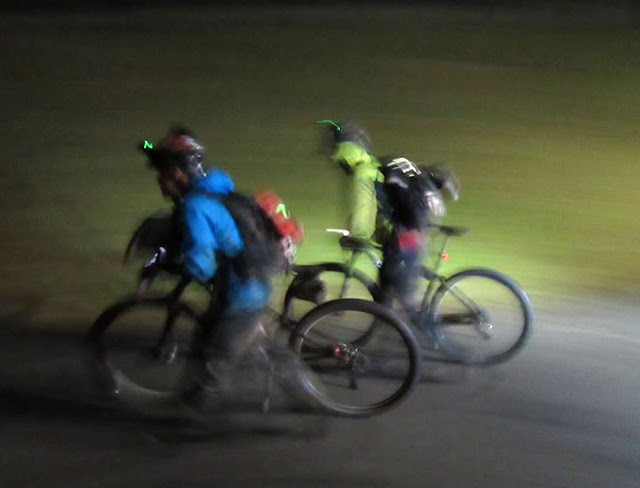 Around 2am, we finished the canoe section and got back on bikes to find two more controls.  The combination of the night, rain, and windy biking made this time the coldest part of the race.  Looking at the map, we knew we were in for a mountainous trek, not a bike ride.  We spent around 2½hrs pushing our bikes uphill to gather these two controls.  It was excruciating.  I promised the team that there was a glorious downhill coast after gathering CP21.  Cold, shivering, and miserable, the team held onto these hopes as we punched CP21--it was like the golden light at the end of the tunnel.  But as we parted the grassy trail leading downhill, what we saw was a steep, rocky, and incredibly slippery slope the entire way down.  "Can't ride this shit down in the rainy night" Greg confirmed.  Damn, he was right.  Clip one rock wrong and you'll roll down like a rag doll.  Needless to say, we spent the next hour or so, carefully tip toe'ing down the entire path.  What a letdown.  I developed "lazy quads" by the end of the 95km biking section.  It taxed my quads so much, that by the end of it, my quads didn't want to have the energy to stabilize itself walking anymore.

The last orienteering section was apparently a 15 mile trek.  We started off gathering CP30 to the north of the lodge, and went west into a counter-clockwise direction, leaving CP28 and 29 as outliers, just in case we had time.  We were told CP23 had been super tough to lots of teams but by the time we reached it, the morning had lit up the day for us to better see in the woods--woods that didn't have any bugs or spiders!  We always eat hundreds of bugs and spiders in FL as part of our nutrition ;).  We nailed CP23 on first try and then proceeded to bushwhack directly to CP24.


final trek route we took as I recalled it 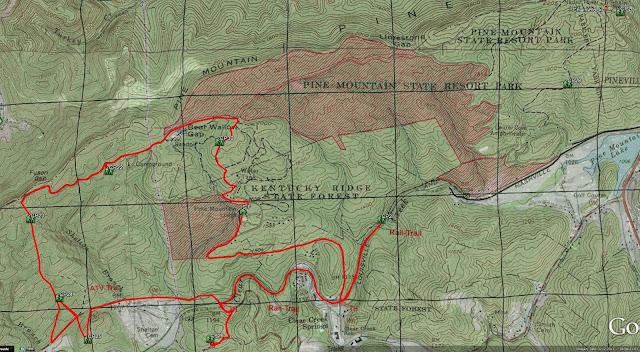 None of us had functioning altimeters, and I knew a sharp bearing across a near 1km distance was going to be impossible for us to nail accurately in the mountains.  I had us following the re-entrant all the way down until we hit the road.  It was the most epic 55min bushwhack to date (some of it was captured on video earlier in the blog).  At that point, we ran back to a known intersection to take a straight bearing to CP24.  CP25 was also attacked from the same intersection of road and trail.  We climbed very steeply but accurately.  After gathering CP26 and 27, we calculated getting the far eastern controls would potentially put us in a risky time situation and called it off.  In a rogaine-formatted race, you would lose one control for every minute you were late.  That's harsh.  We didn't want to be near that red zone.

In the end, we finished 4th in the Open-Division and surprisingly won the Honorary Spirit Award after being nominated by team We Will Survive (Thanks guys!).  This award was for displaying traits of an admirable adventure racer, helping and encouraging teams out there.  Often times, it is a win just to be able to last 30hrs, let alone race it competitively.  And in this year's championship course, we agreed it was the most brutal terrain combined with weather condition we have experienced.  It broke a bike spoke and flattened a tire along the way.  Kentucky's a beautiful area and I'm sure it would have been even more of a spectacular view on a sunny day.

Like our fellow Florida team, Team Disoriented, we are amazed by the fitness levels of the national caliber teams.  We're proud of the top US winners, like team Tecnu Adventure Racing who cleared the entire course in 16hrs 22min, and look forward to seeing them compete at the world ARs and championships. 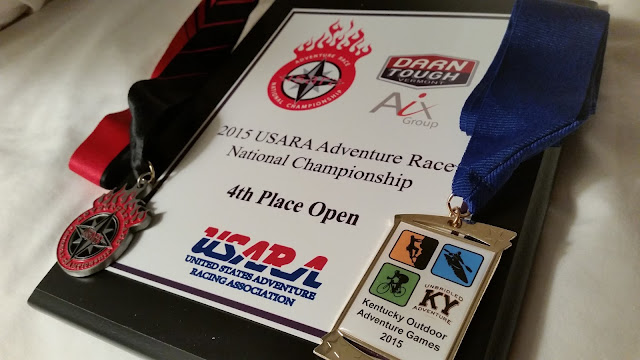 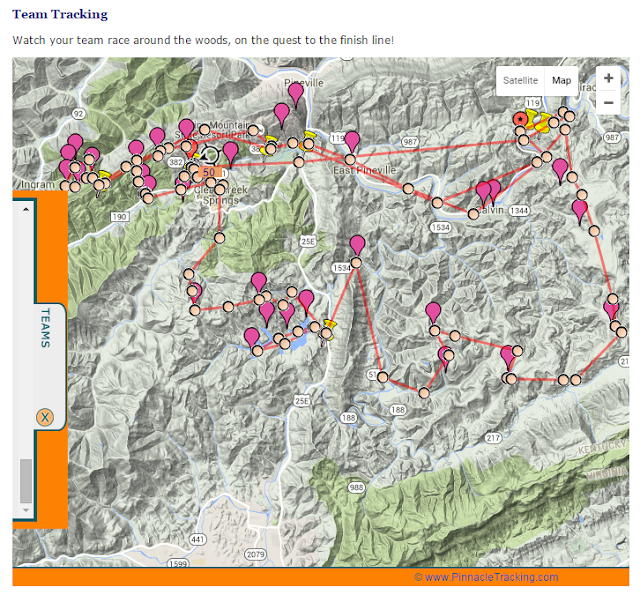