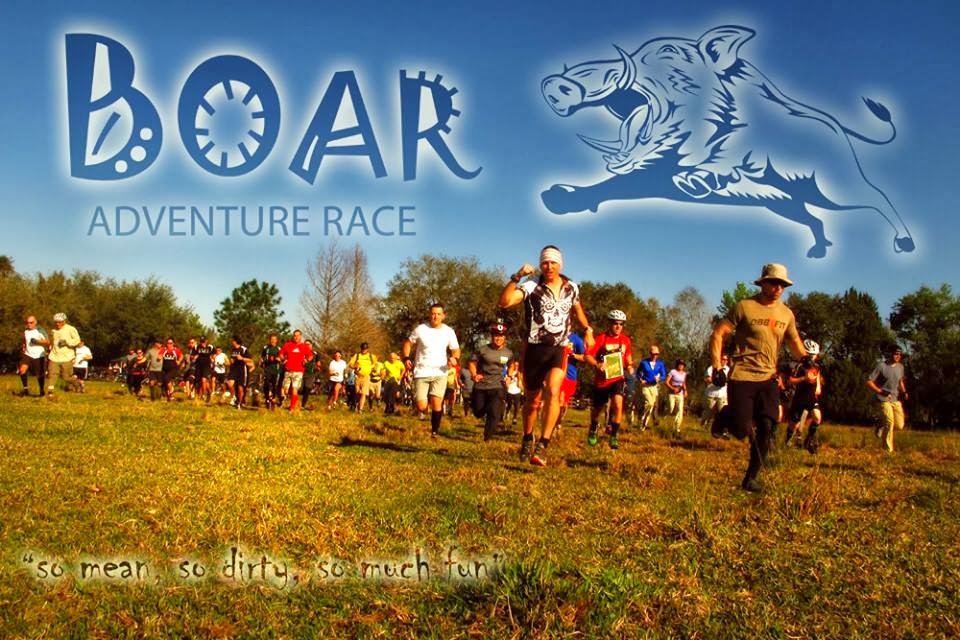 This month, "FAST, FAST, FAST!" we had the privilege of "SPEED" running under Dave Ashley's "WINNING" leadership, captain of the currently number-one ranked national team Rev3/Mountain Khakis and overall "TOP"winner of the Sea to Sea AR a couple "QUICK!" weeks ago.  In the days leading up to the Boar AR, those were the words that he hypnotized us with during Facebook chats before bed, and as I write this, I still blurt them out like I have Tourette's Syndrome.

While most others were tapering down their workouts the week leading up to the Boar, Nate and I adhered to orders and were ramping it right back up after a few days of recovering downtime from the 72hr Sea to Sea expedition.  We were really looking forward to learning what it takes to get to our next level. 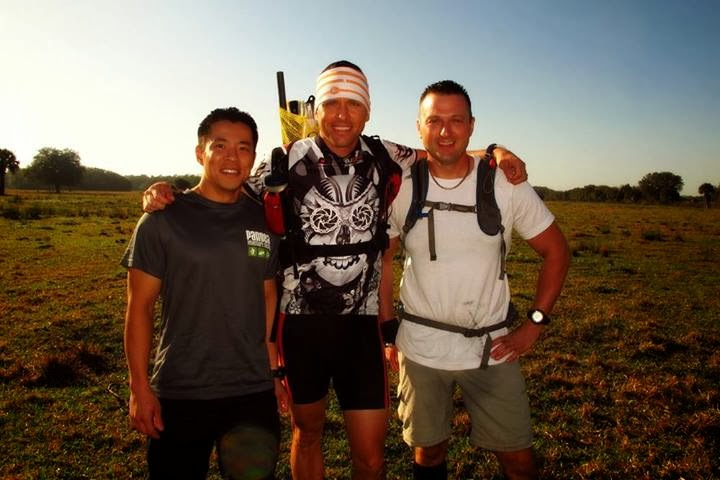 Prologue
Instead of the entire pack of 24 teams starting on bike at one starting location, the race director decided to spread teams a bit by starting with a spontaneous "out-and-back" one kilometer run.  And thus began the journey of my heart rate bouncing off 170 bpm's.  Here's a chart to show it means we were physiologically starting at a 90% effort, a level Nate and I would basically maintain the entire race!


Bike 1
Biking over cow-pounded grounds is no fun, which is what we rode over for most of this section.  We were riding over a cow pasture.  There were holes of uneven ground and grass, as well as massive patties of cow dung plopped down everywhere you went.  I just embraced it and rolled over the first pile of crap I saw--there was no avoiding it.  Dave basically took direct bearings to the controls while I punched them.  I also recall looking back and seeing Nate wrangling and shaking off a cow that was chasing him :D 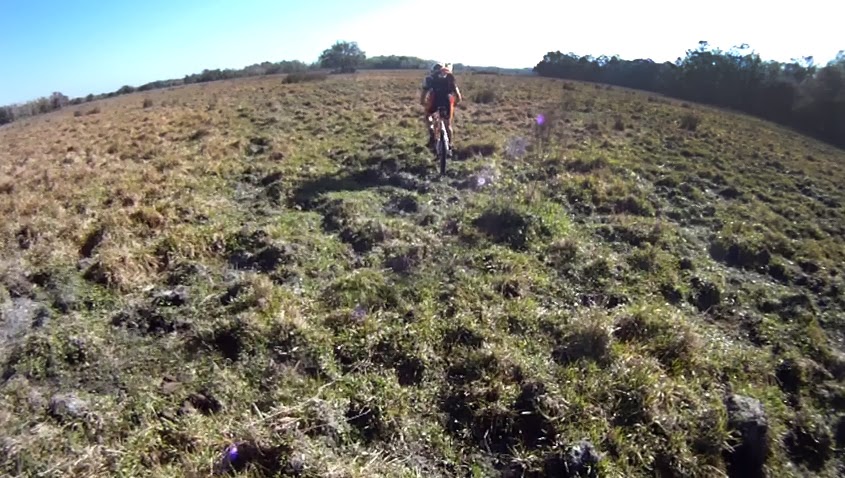 GPS route - the aerial view is deceiving, this was the toughest bike ride of the race 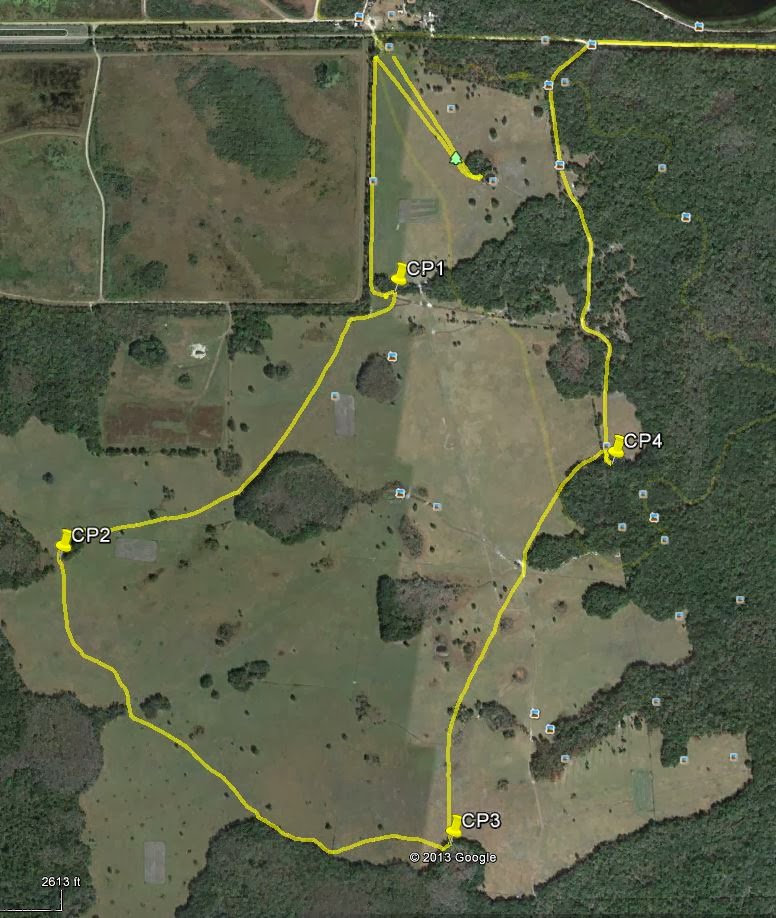 Along the way, Nate's bike tire got slashed by something.  He would excruciatingly continue riding for another five kilometers over this brutal ground before realizing it.  In doing so, he was quickly exerting all the quad power he had to overcome the large contact patch his flat tires would now lay down.  On the way to the Boat TA, it was apparent we needed to fix it.  His rims were bottoming out.  Our SPEEDY pit stop was clocked at exactly one minute to pump it back up with CO2 cartridges :)  We accomplished FASTEST leg time here. 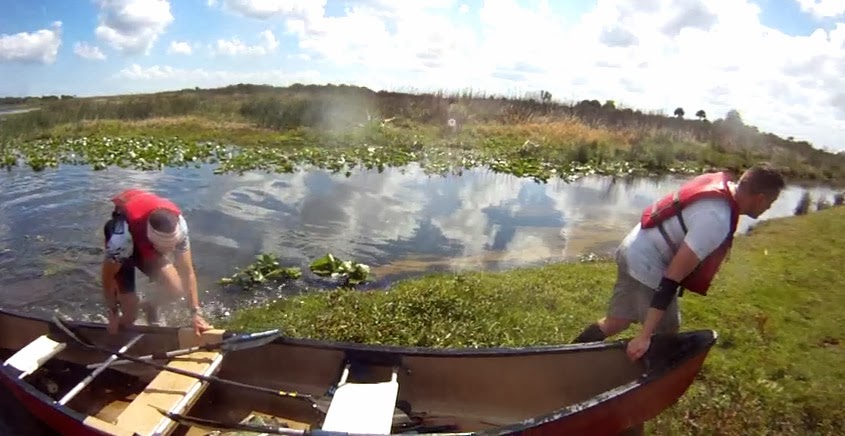 I was given the task to navigate this segment of the race, and it would be the only one, so I'll speak what was going through my mind in the tougher areas.  Pressure was on, as this was the most difficult navigation of the race, along one of the twistiest, gnarliest area of St. John's River.  Luckily, I pinpointed CP5 through 10 with relative ease.  For CP7, we took a shorter route, but I'm not 100% sure it was the fastest route.  Even though we were first out on the boat, a couple teams mysteriously hopped ahead of us at this control.  Upon review in Google Earth, my yellow route was 50m shorter than the alternative red route, but included a couple very small portages. 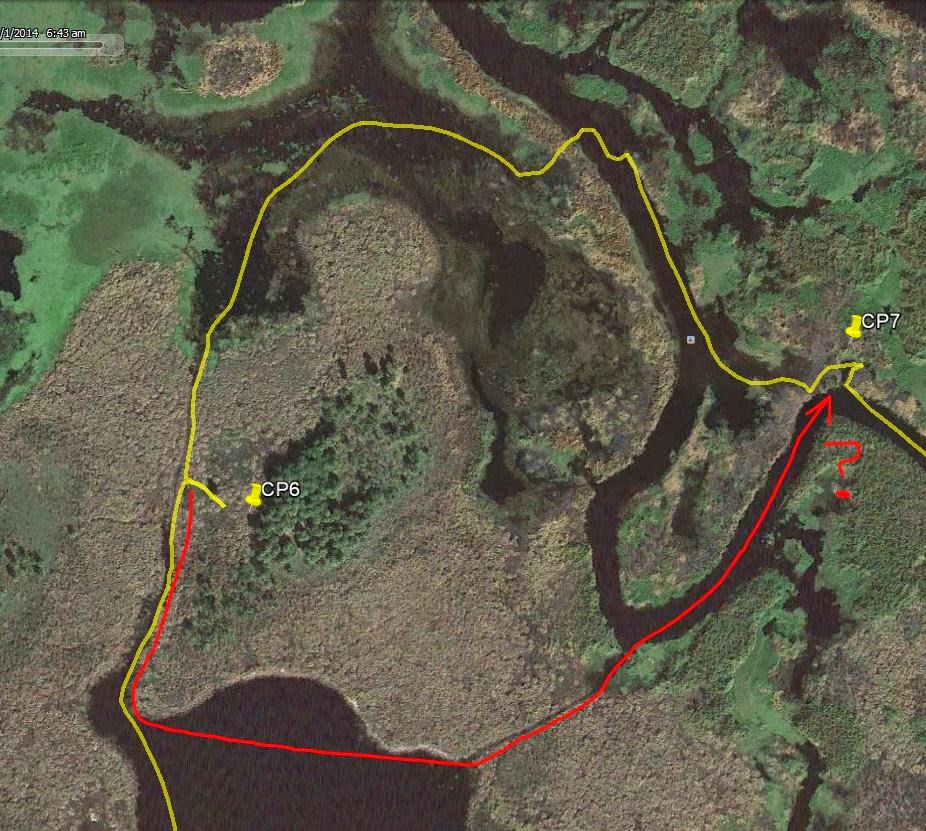 And then came the control we predicted would be the toughest one during pre-race, CP11.  We overshot it, as did many other teams.  After scouring (point A) for five minutes, we cut our losses and shot a reverse bearing from some houses at (point B), as Dave suggested.  It was then that most of the nearby features started matching up to the map again, so we backtracked to find CP11 correctly. 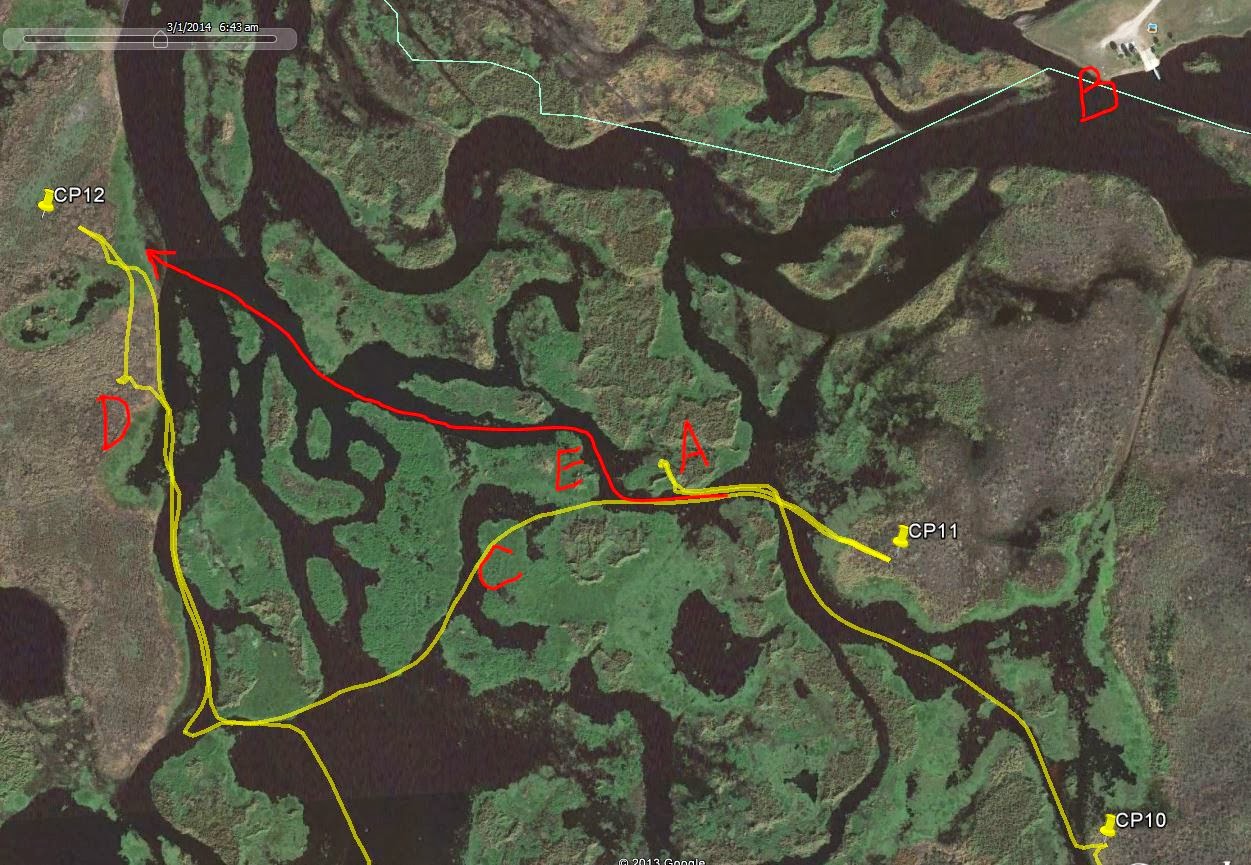 Going over to CP12 to the west, I originally planned to take the shortest route (red line) by running into the west wall at (point E).  In real life, the wall never came, and so we continued west.  My mistake was not identifying the distance needed to travel to (point E) from (point A) to know when to turn north.  (Point C) gradually turned southwest, and as I reviewed all route options that turned south like that on the map, I was stumped.  There was no route that continued in that fashion, on map.  You can even see our yellow GPS line running through mapped green vegetation.  The higher water levels threw off the maps.  Anyways, we committed and bailed to the west boundary and then paddled north towards CP12.  Since I did not know exactly where we poked out after bailing west, I was trying to locate features and identify them on map to mark our location.  Eventually, we docked at (point D), set out the hunt, and found it in a dirty fashion.


can't seem to find the gator 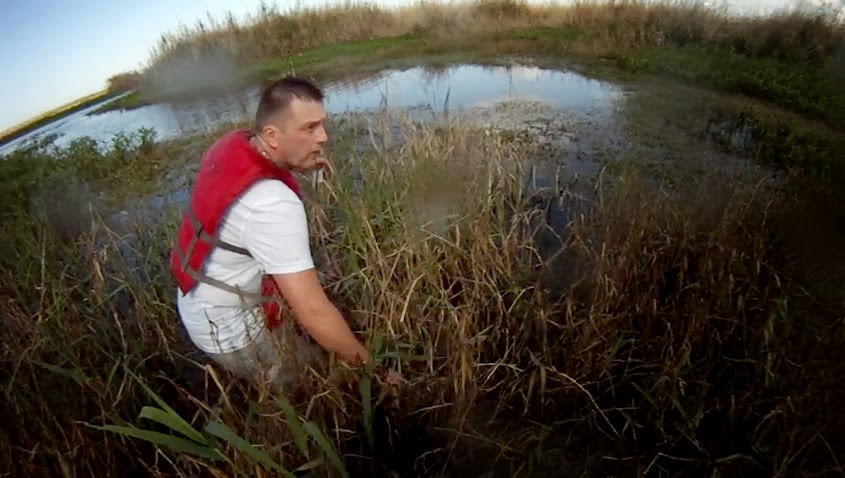 For CP13, we docked our boats on shore 175m east of CP13, ran in and out to punch it and then ran down to for CP14 as Dave paddled the boat alongside, maximizing efficiency. 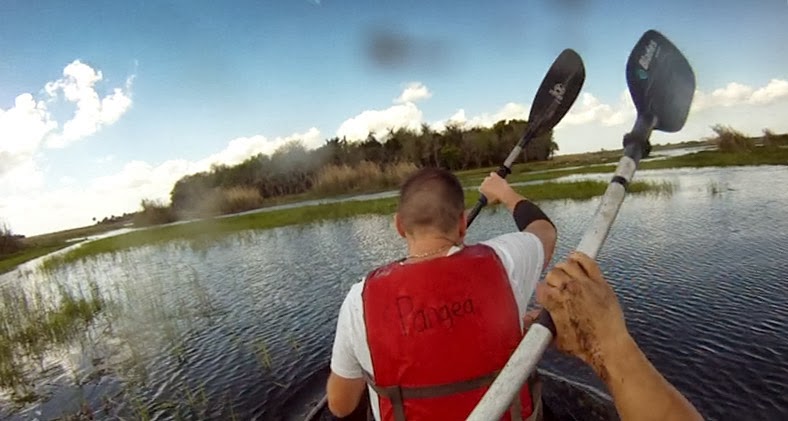 Transitioning out of the Boat TA, Nate's bike tire had gone completely flat again so we tried duct taping the gash back up before airing it.  It helped, but was not a solution. 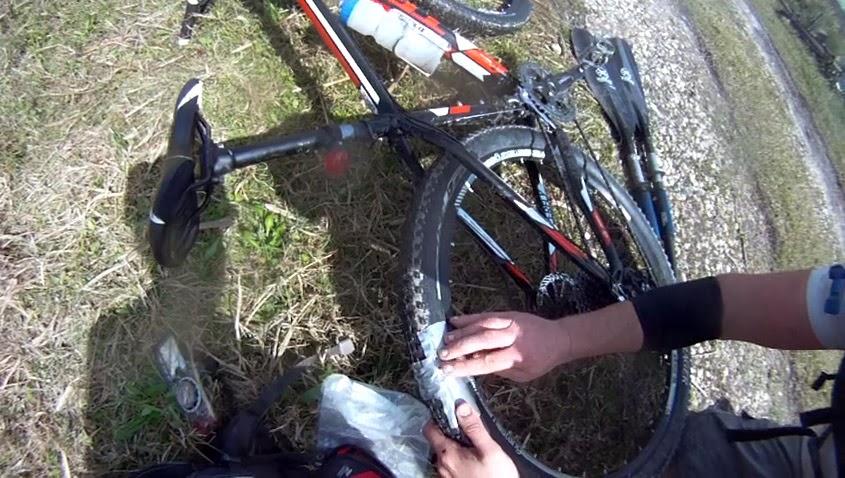 Foot 1
A short bike ride got us to the location of the orienteering section, made of six distance/bearing controls.  The route would take you on a loop that circled back to the same Foot TA again.  We went fast and ran through the bushwhacking areas, tearing down palmettos enroute to controls.  Our constant pace and Dave's incredible accuracy gave us the FASTEST time here. 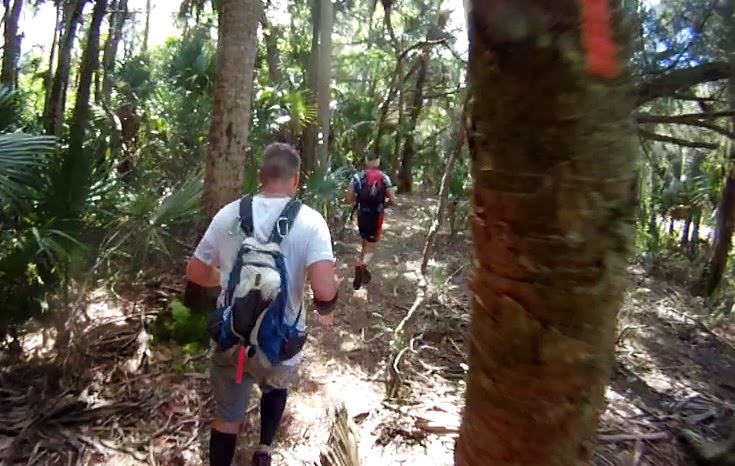 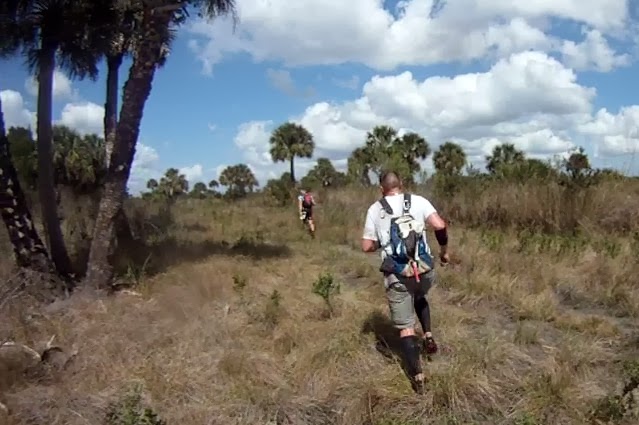 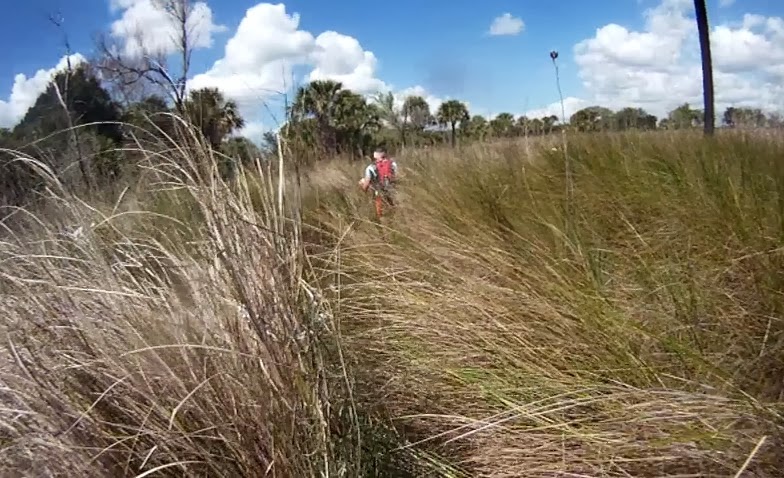 Bike 2
As we finished the orienteering section, we picked up our bikes and bolted out.  Ron Eaglin, volunteer at Foot TA, graciously loaned Nate his bike so that we would have a less interrupted race.  It was a great relief and we thanked him for that.  However, Ron also spoke of how we may be several minutes behind another team.  Once Dave heard that, he turned into the Incredible Hulk, put the entire team on his shoulders, and went on a race-efficiency rampage! 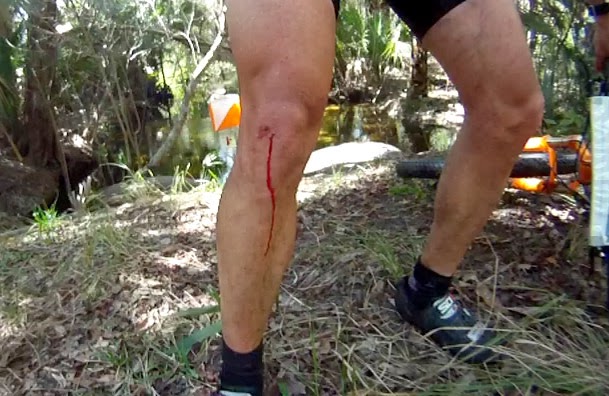 He showed us ways to shave every second we could and even towed Nate, as this is his weakest discipline.  With him being the slowest one amongst us three, I was hoping he wasn't bouncing off the rev-limiter for too long.  We spoke ahead of time that if one of us were to bonk in this race, we were at least going to do so with guns blazing at MAXIMAL efforts! 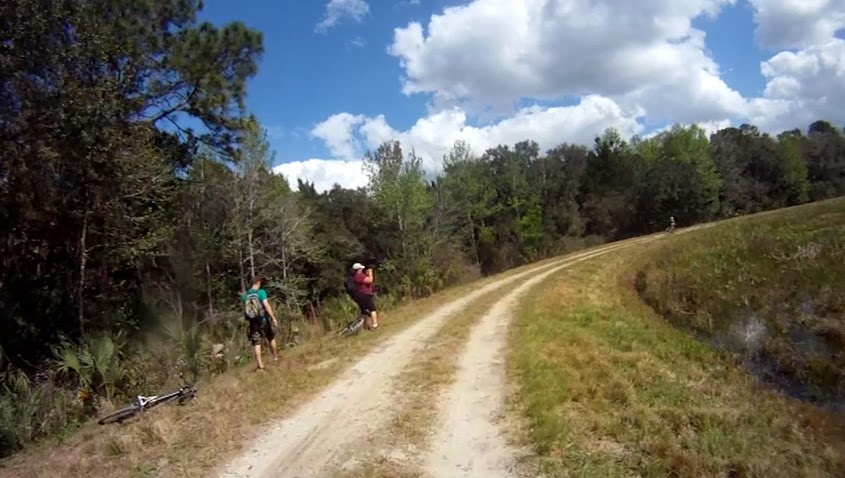 "Dash" as he is rightfully called, took navigation, the punch, and the role of the mule as we raced off into the distance.  From there on out, it was like a jet taking off and continually ACCELERATING while we held on with death grip.  We maximized every thing we could.  Dash had the eye of the tiger, and there was nothing stopping him.


some construction at Orlando Wetlands Park 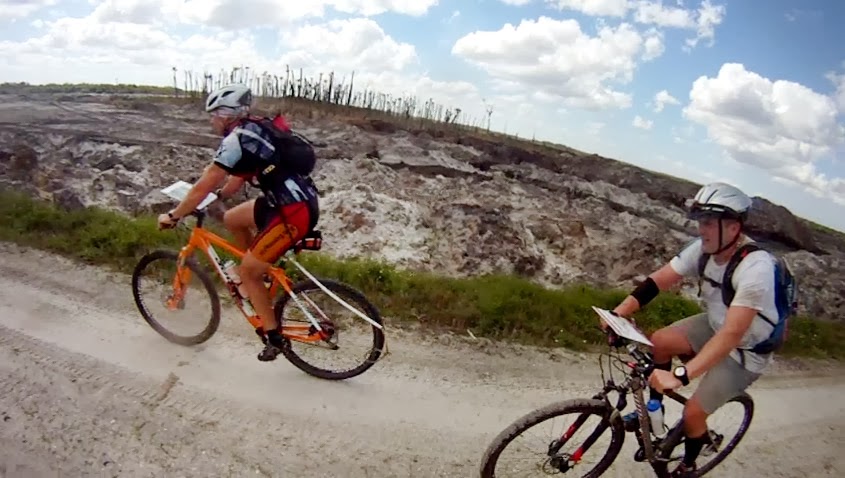 
Foot 2
Between Nate and I, I'm the faster biker, and he's the FASTER runner, usually by a large margin once we're hours in.  It's strange how it never changes, even though we often put forth more training to even out our weaker side. 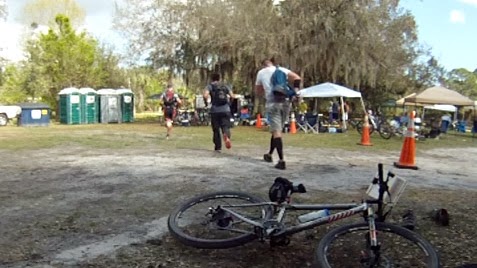 Me being the slowest of the three on this section, it was now my turn to man up.  If there's one thing I have, it's endurance, but not running speed...their speed, at least.  I was cramping up here, running out of water, huffing, wheezing, and trying to breath through a cold I picked up a couple days before.  Dash carried my gear, had me rounding corners to take the shortest route possible, and probably at one point, dragged me by the neck down the trails.  All I could remember from this section was the ground I stared at, trying to hold my head high :D

Navigation was FLAWLESS as we took a counter-clockwise approach to clear the controls, including an energy-saving bushwhack from CP29 to 30.  After punching the last CP31, we ran as fast as we could home (correction, I ran as fast as I could muster), hitting some peak heart rates I have never hit in the past, before crumbling down to the ground at the finish line!  Yep, FASTEST!!!! time on this leg too!  And yes, we were announced to be the FIRST team to finish! 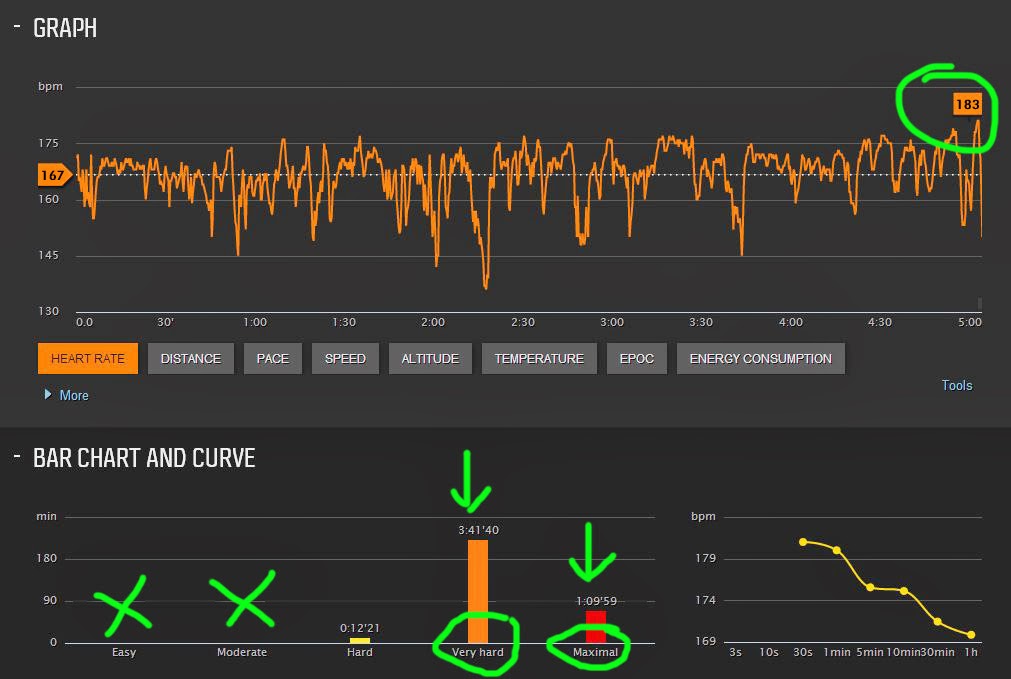 Overall, we learned quite a lot from Dave Ashley.  All props to Dash for taking us to another level, to first place, although it is no easy feat to keep up with him :)  In a masochistic way, we enjoyed maximal physical efforts we were pushed through on this race!  Thanks Dave again!  and thanks Ron Eaglin for the bike!