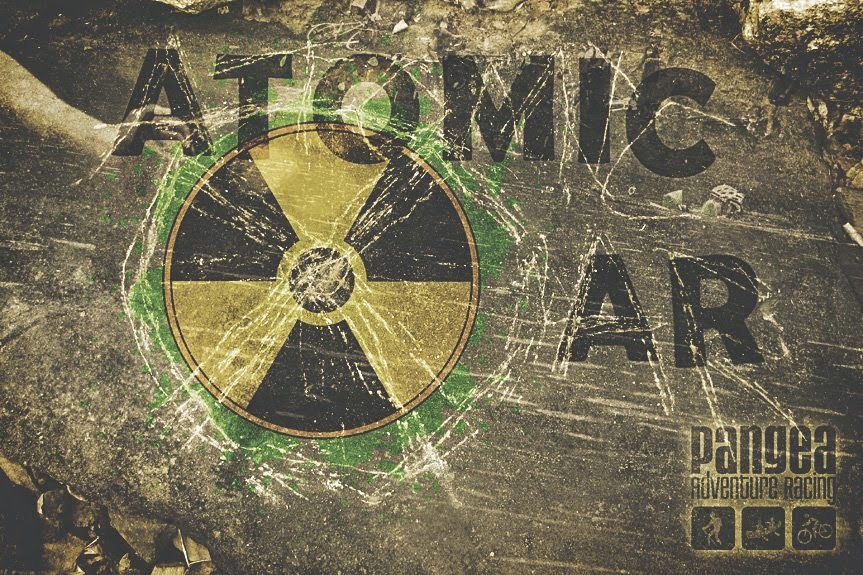 It had been past nightfall for hours, somewhere around 4am.  Many teams had already been well beyond the rapids, safely making it across with the help of some daylight from the evening before.  Most say it was madness to take a heavy, cumbersome canoe into a river with rapids, let alone in pitch darkness, almost blind to the rocks ahead.  You could hear the relentless roar as you approached.  If you clipped a rock going down, the power of the water spun your canoe around, often flipping and capsizing it as you fell down the steps.  Cold, soaked wet, and shivering in the pouring rain, Canyoneros continued to push forward into the unknown, in the most epic part of our race.  (continued below...) 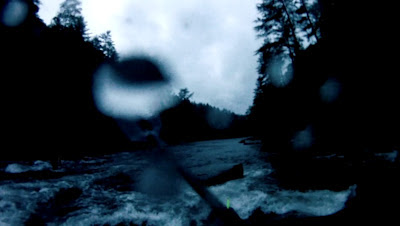 Beautiful Scenery
The race started with a 32 minute sprint across creeks, up smaller mountains, and alongside the lake, followed by a long bike ride.  The view up in Georgia is like nothing we have seen in Florida.  Riding to the top of mountains provided such breathtaking scenery as you looked off of a cliff and into the distance. 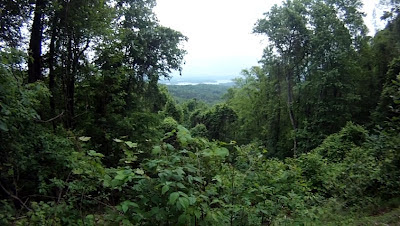 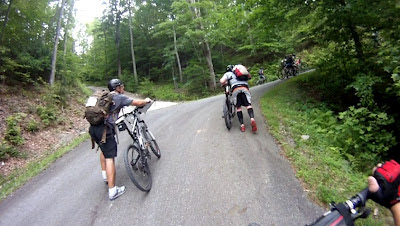 Downhill Biking
Many sections of the bike portion had you pushing your bikes uphill to enjoy a nice long coasting ride downhill immediately after.  This is where a full suspension bike would have been appreciated.  You picked up so much speed going downhill that you had to constantly be on the brakes (at least we Floridians did), otherwise, you risk being flown off a cliff.  It was very intense.  There were areas where you smelled burning brake pad from the people in front of you!

bikewhacking through forestry is a lot more pleasant in Georgia 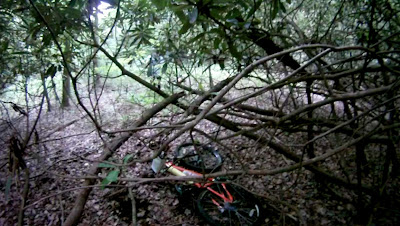 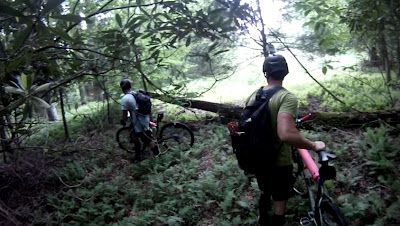 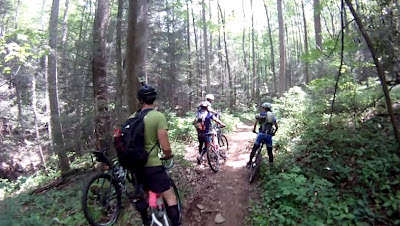 teams banding together for the good of the whole 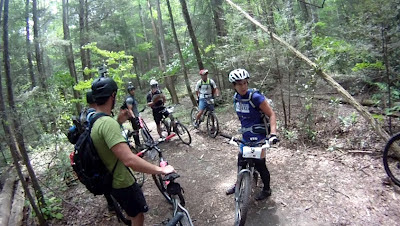 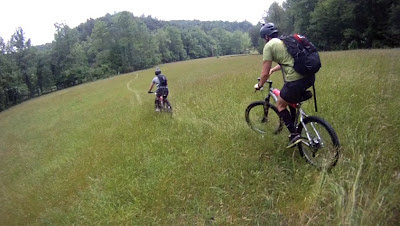 Here, you ducked down low and pedaled as fast as you could in a single file line.  Vehicle speed limit was 35mph here.  Brian hit 44mph!  Where's the bicycle cop?  What?! 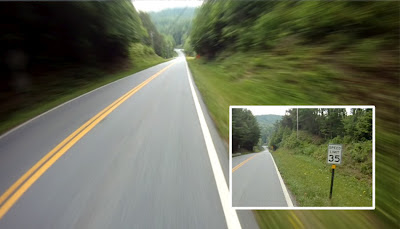 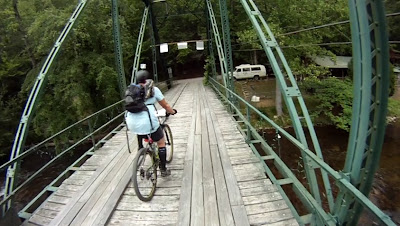 Swim Across River with Bikes?
We were faced with the decision of taking the long route on bike to CP13 or cutting the distance down tremendously by trekking through forest and swimming across a river with your bike.  We chose to stay dry and biked the long road.  Sure enough, we ran into a team whom we had met at the previous CP12, which suggested both route options produced identical times.  Most people who swam across reported how much it sucked. 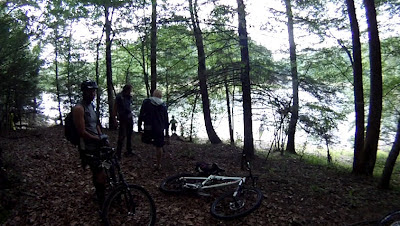 walking the bikes to conserve energy and last 30hrs 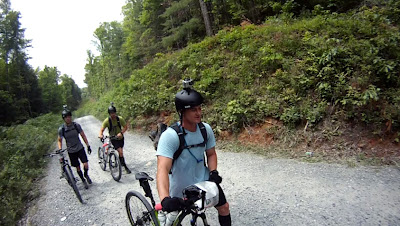 Brian, our Master CP Attacker, trekking up a 2600ft mountain at a constant crazy incline 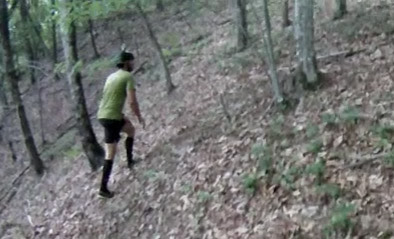 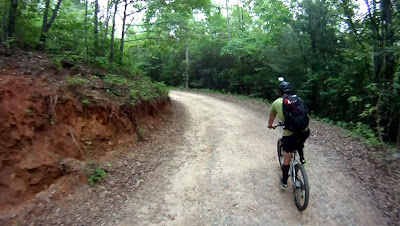 lots of clay provided color to the ground 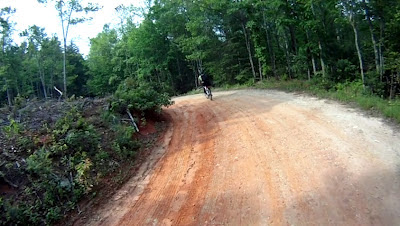 Chased by Mountain Man with Shotgun
We feared for our lives when we crossed into private property by accident, thinking we were on the main road, when in fact, we were on a smaller trail that ran parallel to the main road.  Mountain man came chasing and yelling at us for about 200yds.  Greg decided it was smarter to just stop and listen to what he had to say, rather than risk being shot at in the distance.  He marched us back to his house where he diverted us onto the main road...phew! 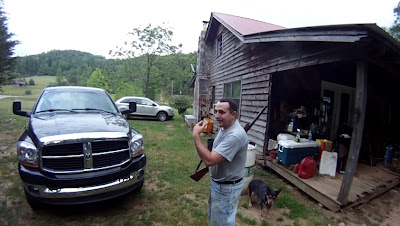 Night Orienteering on Foot
We stopped by a small and friendly family-owned burger joint at the Boat TA.  Our dinner took a while to cook but it was much needed calories for the team.  While we waited, I reviewed the gigantic map which was so large I could have used it as a blanket.  There was still daylight in the evening as we set off into the woods for the foot portion of the race. 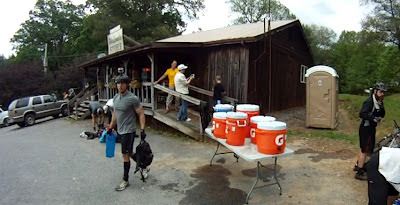 creatures in the Georgia woods 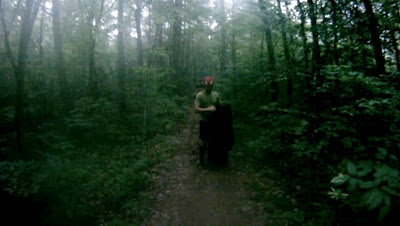 We saw many fresh animal footprints on the ground.  Everyone was on guard in case anything popped out of the woods. 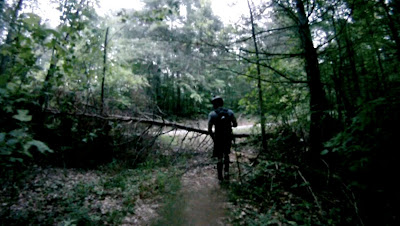 Once night set in, things went haywire for us.  It was so dark at night in the woods, that if you did not have a flashlight, you were in complete blackness.  On map, CP20 appeared very straightforward to get to.  We used the clearing south of it to use as an attack point.  Go north 200m and hit the creek, where the control point was to be found.

About 50m of bushwhacking, my compass flipped on me.  What used to be north was now northwest.  In my experience, the compass was always right.  Even when I thought the compass was wrong in the past, it always turned out I was the one who was wrong.  So this time, I pretended that I didn't just see that happen and continued to plow trees down in the new North (which was still northwest).  20m later, the compass flipped again!  We backtracked and started again.  I brushed this abnormality off a couple more times until I realized we were going in a circle!  We were seeing the same fallen trees!  What was going on??

I double checked my teammates' compasses and theirs reported the same anomaly.  There's only one thing that can skew a compass--metal.  Maybe there was an iron deposit beneath us.  Maybe ghosts were playing with us.  Whatever it was, we took the bearing of whatever north was at that location and said "let's commit and run into this creek or river."  Unfortuntely, the north there headed us northeast... 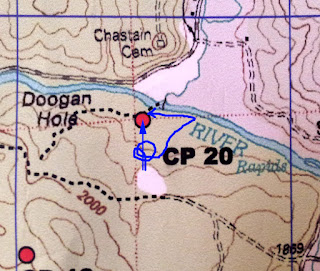 ...we slowly bushwhacked further and further away.  Time churned and churned.  People were getting disgruntled.  Then...we heard a river.  Brian said it came from one direction, Greg said it came from another, Foster another, and I disagreed with all.  Perhaps our tiredness allowed delirium and irritability to set in.  But hearing the rapids from the river sparked some optimism of understanding where we were.

Alas, the sound of the rapids got louder and louder and we finally approached the river.  Our compass was showing the correct direction at this time so we went west to hit this creek, keeping close enough to the river as to not get lost again.  Foster finally honed in on CP20, and we headed west towards a mapped bridge near Dial TA (the boat transition area).

Crossing the River with a Rope
As if the time spent finding CP20 did not crush team morale, the bushwhack towards the bridge made us lose almost all determination.  No!  Canyoneros never lose determination.  Canyoneros always move forward, never backward.  The time was around 1am.  We took one look at the river and realized that we had no idea how deep it was, how powerful it was, and what kind of visibility we would have once we went swimming in it.

We continued to use the river as a rail, bushwhacking west through thick forestry.  One kilometer later, I figured we were halfway to the bridge.  We had another kilometer to go.  Bushwhacking through thick forest is a very slow process.  You move 10m every minute.  It could take 30min to trek one kilometer.  We kept peeking at the river every 20 meters, shining light into and hoping to find a shallow area.  People were mumbling words of frustration--if only we could just swim across.

Eventually, bitterness trumped judgment and we just went for it.  We chose to cross the river where the rapids were--typically shallower areas, yet more powerful stream.  Brian rigged up a rope where we all held onto.  Greg and Foster are heavier and were at the ends to be used as anchors.  If one guy slipped and fell, he had the support of three others.  We spotted rocks poking through the river's surface and walked near them.  Waist deep in chilling water, we firmly planted each foot before moving the next and gradually made it across safely.

(continued from the intro...)

It took us about 30minutes to transition out of Dial TA--checking in, filling up on water, getting our gear packed, and attaching our glow sticks.  Next time we'll prepare better.  It rained and the water was pitch black.  Rocks crept up on you.  I became a full time flashlight man, hand high in the air while holding the torch, often times for both canoes.

Brian and I started off slower and learned the technique of passing rapids.  We capsized twice before hitting the first CP on boat.  I'm not sure how Greg and Foster did it, but they zipped ahead with little light.  Eventually the score was 2 to 1, Brian/my boat flipping over more than Greg/Foster's.  We were laughing it up, enjoying the shocking cold, humiliation, and wildness.

Eventually, luck took a turn and Greg/Foster rang off several more canoe flips in a row.  The demoralized look on their faces was getting serious now.  We knew they could only handle so many plunges in the frigid water.

And then the big one happened.  Brian and I stayed ahead and got lodged at the rock seen in the pic below--immediately after a rapid falloff.  Greg/Foster awkwardly negotiated the first drop sideways and sure enough, flipped their canoes.  Brian and I watched helplessly as they floated down the rocks, holding onto their canoes for dear life.  We shouted "feet up! FEET UP!" as a reminder that you want to pass by shallow rocks with your feet forward, not your back or head.

They were able to maneuver their body in that position, but the canoe dragged them too fast and they let go. Greg continued to float down the river until he smacked into a large boulder and climbed on top of it.  Foster instinctively held onto shallow ground and tried to make his way to our lodged boat.  He made it halfway before he slipped and got pulled along with the vigorous water.

Brian and I knew this one was of immediate danger, so we got off of our boat and forced it free.  Our canoe spun 360 degrees down the gushing water but we managed to control it and stay afloat.  Foster held on to all hopes of survival seeing us coming towards him.  The piercing cold drew upon some adrenaline that gave him the strength to dive into our canoe in a second without toppling it over. 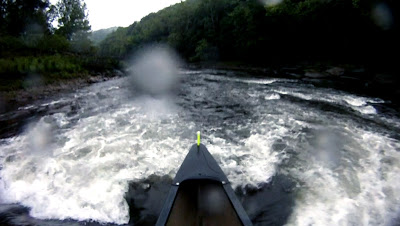 Greg was battered on top of a large boulder as we powered our canoe over to him.  He got aboard and we set off to recover one of their overthrown paddles.  Their other paddle was forever lost upstream.  Their capsized canoe drifted down the river, upside down--a symbol of the battle we just fought.  Another team (I believe Team Sunrift) watched in horror from the side on higher ground as we negotiated this rescue.  Eventually, Greg/Foster's canoe got held up on some rocks near a beaver dam which allowed us to salvage it.  With only three paddles amongst four brave souls, we twisted one apart in half so that every one had something to paddle with and to continue the race.

I think the final score was 8-2 canoe capsizes, with Greg/Foster losing :)

Building a Fire
Half the team had uncontrollable shaking when the morning rose with the coldest temps of the night, bringing a nagging wind that tinged your clothing cold.  We pulled over and created a fire under a concave earth structure with whatever dry branches and pine needles we could gather.  We spent a good amount of time here to warm up and eat, before paddling our way back on calmer waters to the main transition area to finish the race. 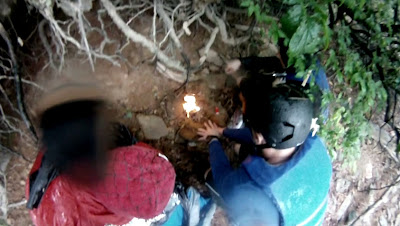 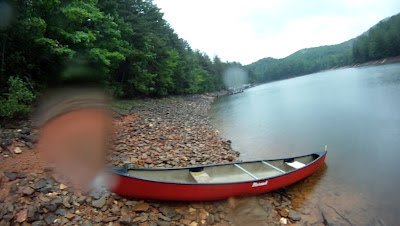 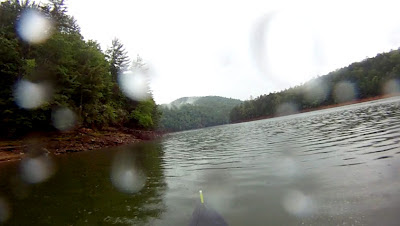 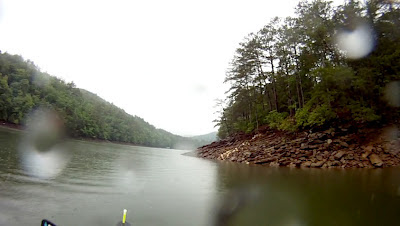 Conclusion
Atomic AR was the most memorable adventure that team Canyoneros has ever experienced.  There were genuine dangers that pushed our mental perseverance to the limits and made this race beyond exhilirating.  The majestic mountainous scenery, the downhill biking, mountain man with shotgun, disorienting night bushwhacking, the miserable rain, the bone chilling river rapids, the warming campfire, the camaraderie of other teams...we would endure anything to relive the adrenaline rush these moments provided. 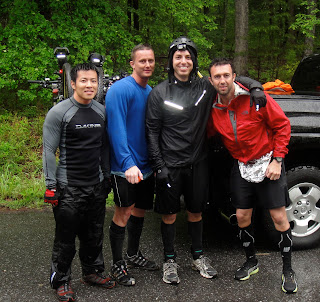