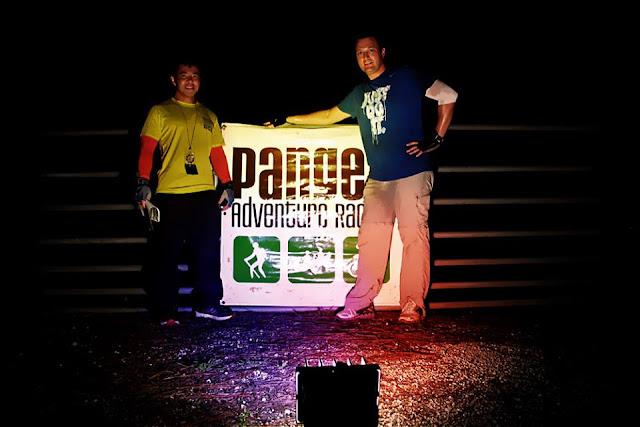 This night race was an excellent race of redemption from our last year's pathetic performance.  Today, we finished 5th out of 14, against a strong stacked lineup of teams.  There are not very many opportunities to practice at night, so our results at last year's Luminescent AR had the excuse of being our very first night race.  There was no excuse this time around.  Night racing is incredible and challenging.  You do not have the benefit of seeing very far to confirm positioning, and if you can develop the skills required, it makes it very rewarding.

Foot 1
Here's our route for the first section.  We were the leaders to the first two CPs, as the mass crowd followed some reputable teams and overshot the wooden fence leading to CP21 (first CP).  Heading towards CP23, I inadvertently took the northern trail (A) while heading east, thinking it was the more southern trail (B).  After running down and up the north-south trail (C), and not finding the trail leading to CP23, we re-calibrated and then figured out where we were and lost the early lead. 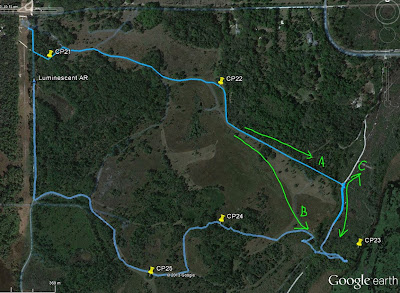 Heading out of CP23, I decided to bushwhack west to get to an open trail, but got caught on some prickly fields of thorns, bailed out and found the trail, anyways.  I chose intersection (D) to shoot a direct bearing towards CP24.  Our sharpshooting has gotten pretty strong over the months and was pretty reliable, as opposed to going around the forest.  At night, we wanted to avoid high risk strategies.  It proved successful, as we saw many teams go around the forest (route E) well ahead of us, in an orienteering fashion, but our bushwhack proved to save even more time. 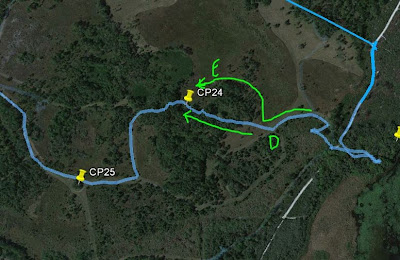 We got out of there by bushwhacking again towards the trail going down to CP25 and exited to the main road to finish the first section.

Bike 1
Nate and I had done our due diligence of studying Google Earth maps, taking guesses at where the race would be held.  Neither of of us even thought Pangea would take us out into the intercoastal waters, but they did.  This segment of the race was fast and furious, as we picked up CPs in the city, heading to and from the Boat TA.  It brought back good memories of when I was delivering pizzas for Papa Johns while in college.  I could not be lost on the streets :)

CP11 was en-route to the paved roads and as we biked towards I-95, we spent a while chasing and passing team Hunter.  Jeez, father and 12yr old son can bike fast.  Some of our mistakes are made while we follow other teams, and CP10 was no exception.  We saw another team erroneously ride to the back of the high school located here.  A couple attacks and we found the word needed for the punch, as the clue was "last letter of first word above Class of 2004."  As team Mojitos headed back up War Eagle Blvd, we again followed, but decided against it and stuck to our original plan to head south out of there.

This is where team Swamp Gators, our coworkers, joined us, upped the ante and brought excitement as we blazed through the dark hours of the lifeless city. 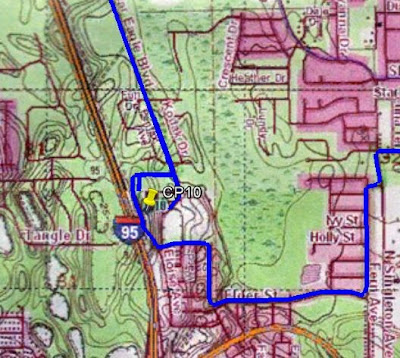 On our way to CP2, I accidently skipped over CP1.  The map print was so small and in the night, while biking 30km/h, it got very hard to read without the risk of ramming into a car parked on the side of a curb.

I should have measured the distance from the beginning of the bridge to the Boat TA.  The highway had a nice and large bike lane on both sides.  Despite that, we were met with angry hoodlems driving by, screaming words of disgust while hidden inside poorly pieced-together clunkers.  I recall BMW logos on a four-toned Civic with Christmas tree lights and bumpers that don't fit and are barely hanging on.  Who are they kidding?  Welcome to the City of Mims, I guess. 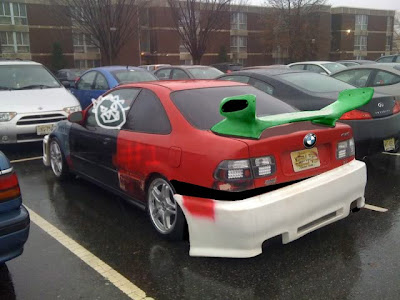 While cruising down the highway on the far end, we saw land and docks, and thought the launch was there.  I followed it all the way to the end and saw nothing, but then realized the mistake once I looked at the map again. 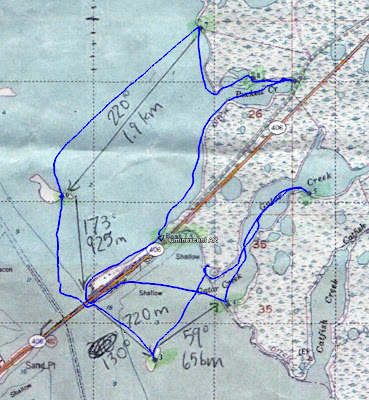 CP9->8->7->6 were obtained with relative ease.  CP9, however, made us lose some time as we docked our boat on the island nearby and scoured it.  The clue was "vegetation west edge of island".  The CP was actually on land, east of the island.

My compass must be going out of whack or something, because my bearings towards CP6 and CP4 didn't take me along my intended lines.  In the night, you can't see landmarks, such as islands, until you get pretty close to it, so it's tougher to course correct.  I also had to conserve flashlight power.  Regardless, this issue only messed us up on CP4.  During the daytime, we definitely would have seen the massive opening into Gator Creek.

We were highly impressed with our improved navigation in dark, in the water.  The intercoastal was extremely choppy, especially as you went down from CP6 to 3 in the open.  I suspect some teams portaged their boats across highway 406 as a means of a massive shortcut, both in distance and in avoidance of waves.  That'll be something we'll have to consider next time we strategize.

We headed back around 2am and there were people still fishing on the docks!

Bike 2
Since we missed CP1 on the way out, we gathered it on the way back to the Main TA.  No time lost, really.

Foot 1
My legs were cramping and I was starting to mentally fatigue here.  Nate has always been my super reliable wing man during training and racing.  He backed me up tremendously from here on out after recognizing my state by asking me relevant navigational questions.  Can't let the navigator bonk, otherwise, race is over.

I immediately got lost heading to CP12.  I got us into a series of loops and circles, and re-calibrated after hitting a familiar ditch to the north (A).  Luckily it was a small area only. 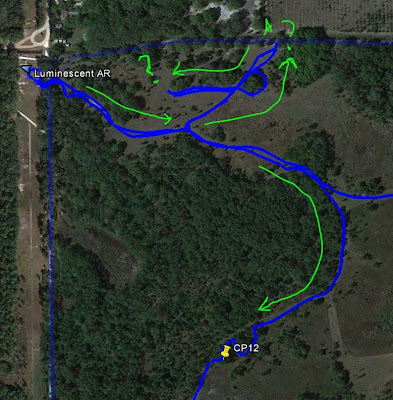 CP13 and 14 went by with precision and a little luck.  CP15 gave us the most trouble as you can see how many attacks we executed through our GPS route: 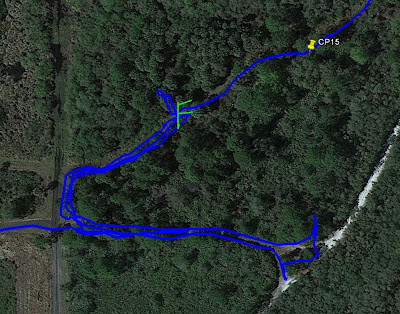 I honestly believe this one was not marked on our map as accurately as it could have been.  Based on our measurements, the original map marked CP15 at location F in the pic above.  We ran up and down the two trails 5 or 6 times, measured, re-measured, tried to bushwhack a direct bearing but failed due to dense shrubbery, and then finally found it with Nate's stubborn determination.  It was incredible and badly needed after all the time we spent on it.  It lifted our spirits and as we continued on, found CP16, and headed back to the Main TA.

Bike 3
Nate was sharp and vigilant.  He took on the role of time management with the last hour left, saying we needed to spend 20minutes out and 25minutes back to make it on time.  With that said, we chose the two easiest CPs to go for (CP18, then 17) and left 20 as an added contingency if time permitted. 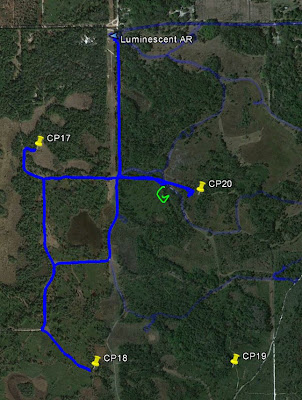 CP18 was the first to grab, as it was the furthest.  The other two would be closer to give us better time to head back.  We pummeled down hard packed road and pinpointed both CP18 and 17 with surgical precision with my on-the-fly measurements.

The speed and accuracy afforded us time to grab CP20, which I deemed would be much harder due to the orienteering nature of it.  It was about a 300m bushwhack into what looked like dense forestry.  Nate was hesitant but with the time left, I was optimistic.  We dropped our bikes on the trail at point G, bushwhack in, and with Nate's FLO experience along my side, recognized the "south of trail" and "vegetation boundary" to find the control.  We had plenty of time left and easily finished back with an astounding 48min segment.  CP19 was left on course and it was the only one we didn't get, due to time.

Fifth place was a drastic improvement over last year's second-to-last place finish.  What changed this time around was that we usually knew when we were veering off course and always had a plan of correction.  We used our strengths to our advantage and kept things methodical and accurate.  My co-navigator Nate was highly proactive as well, not merely following what I'm doing.  We were incredibly happy with the results this year.