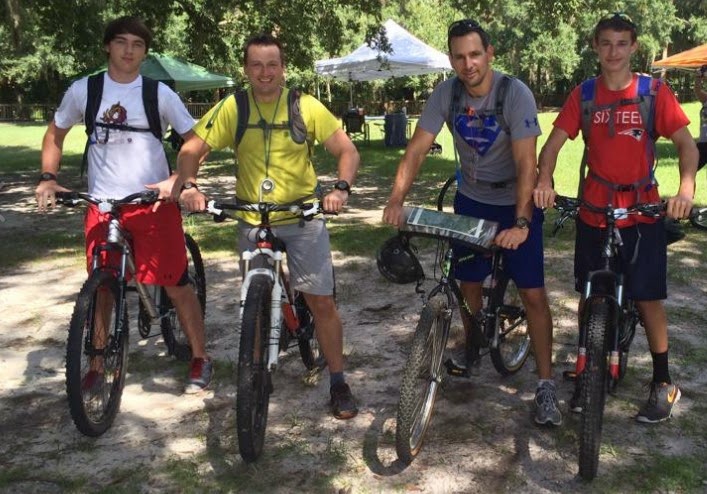 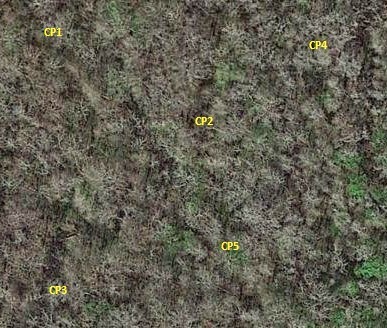 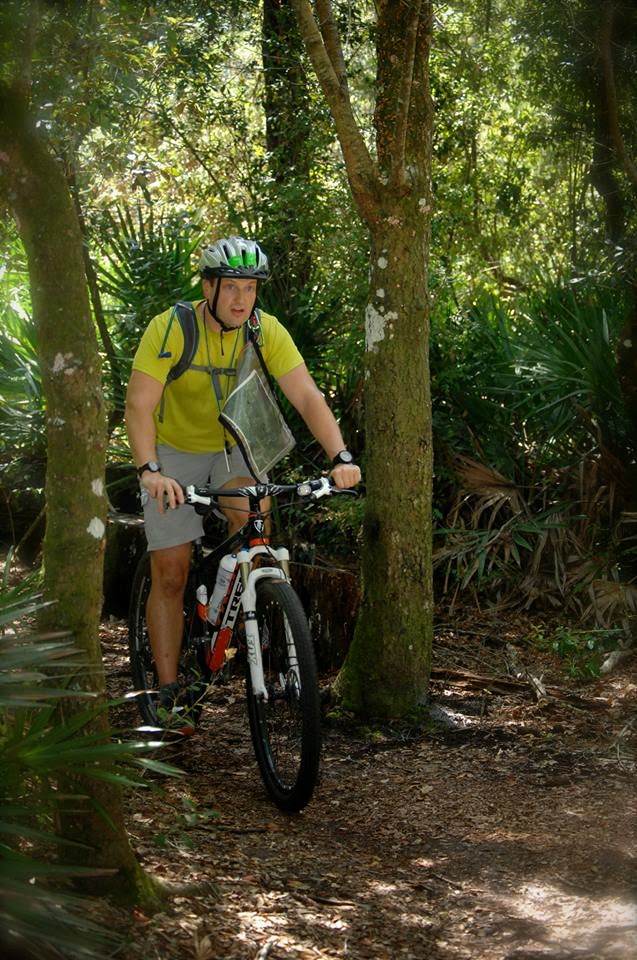 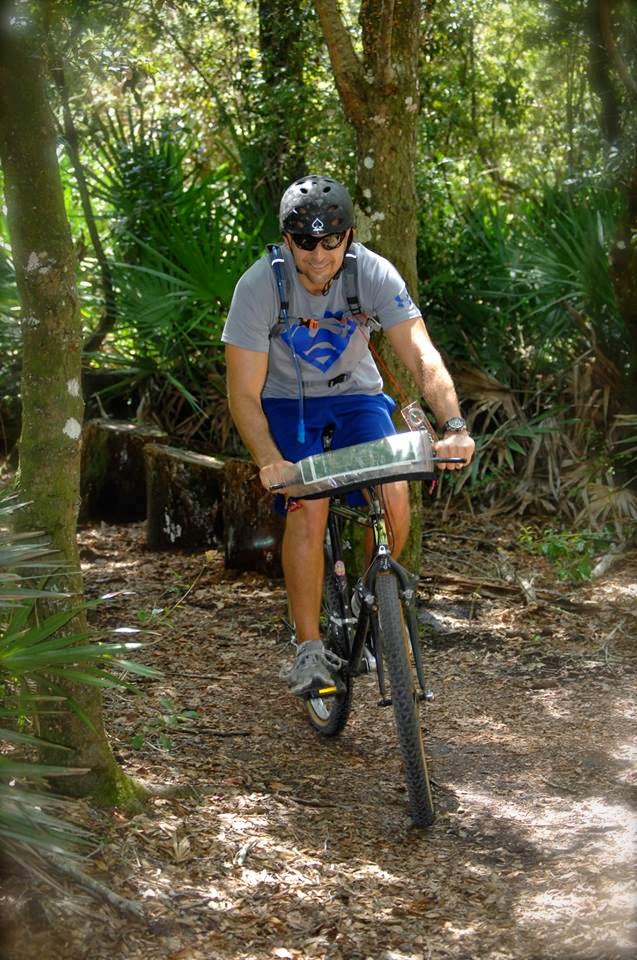 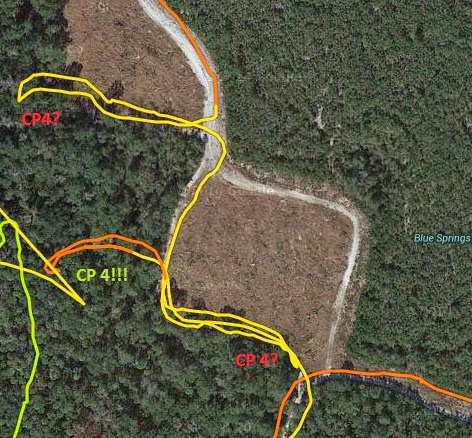 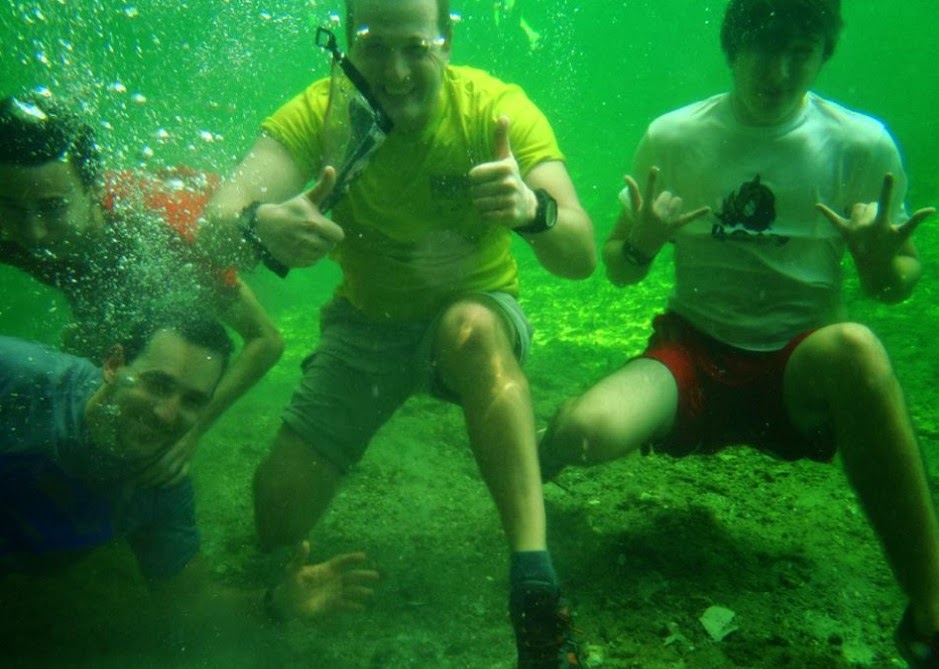 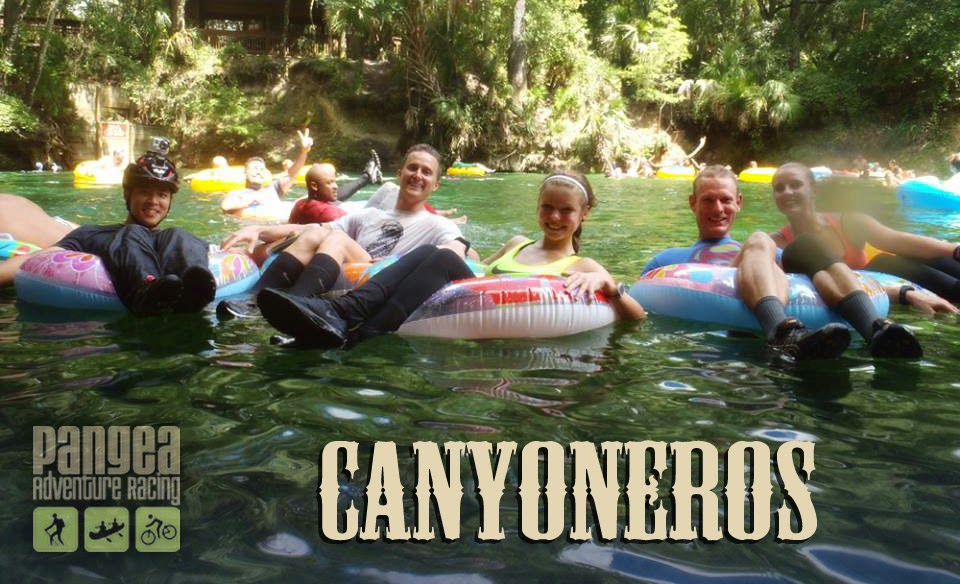 Two Canyonero teams led way to introduce two new girls to the sport of adventure racing--Amanda and Anastasia.  Anastasia had been running a couple smaller events with us before and Amanda had been wanting to join at some time.  The Superhero AR, at the historical Blue Springs State Park, provided a treat for us, allowing for 4 disciplines, including tubing down its infamous clear blue river.

Run
Distances on this run section were so short, we finished this section before we knew it, within a mere 27 minutes, the 2nd fastest time behind the 1st place overall winner.  There were several trails in the park that were unmarked on the Google maps, but as long as we went in the general direction, we found trails to get us where we needed to be.

a Canyonero army in tight formation 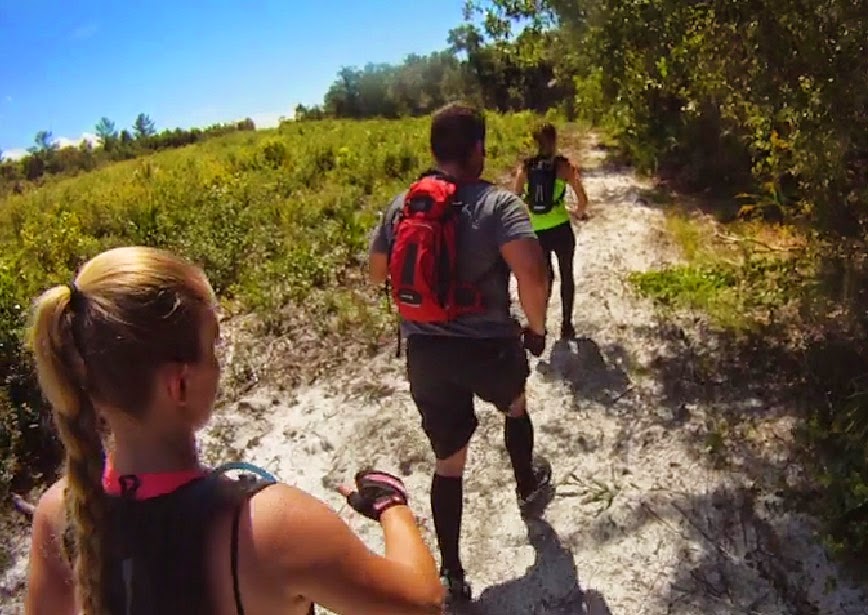 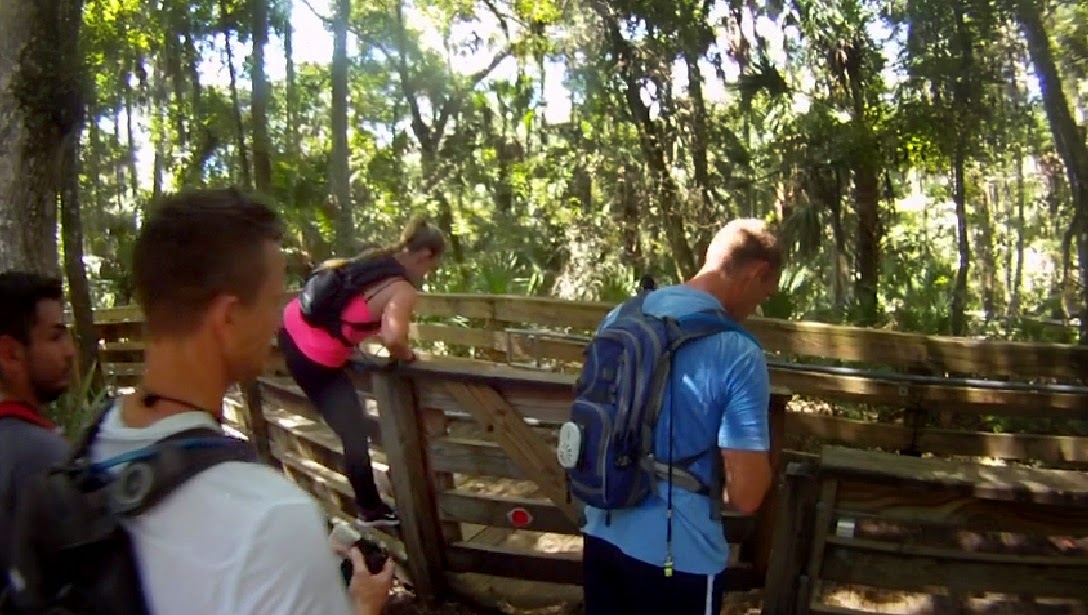 Greg Watson was our superhero speed rabbit, bolting ahead to punch controls and catching back up while the team headed for the next.  The order was CP 7, 6, 5, 1, 2, 3, bonus CP, and lastly 4. 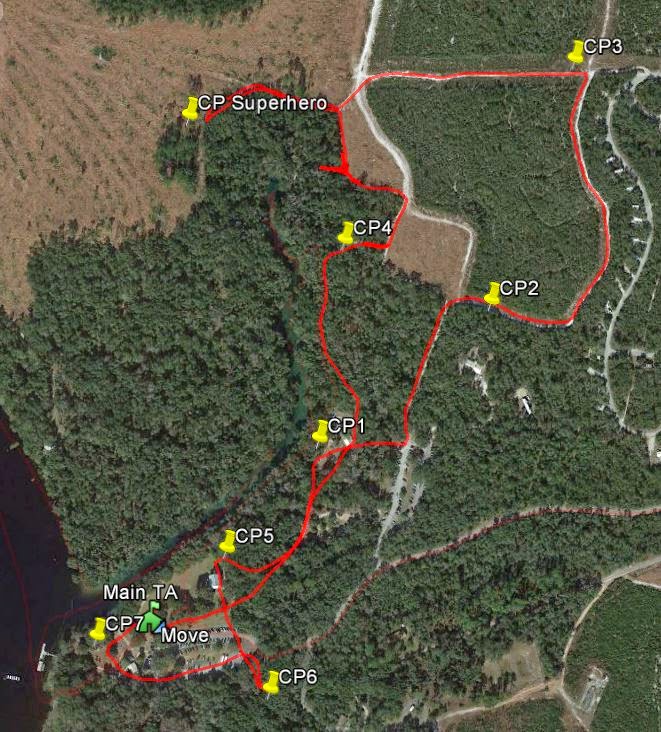 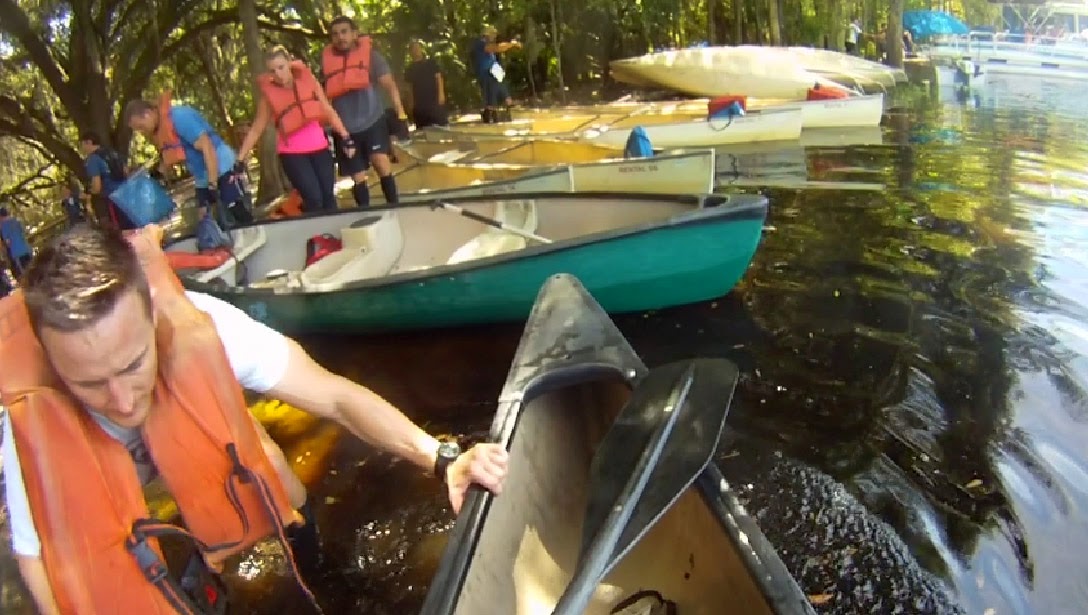 As we arrived at the canoe launch, we waited a few minutes for the elite teams to provide us a canoe, which would be credited back to us at the end.  Anastasia, who just became a US citizen, sat in the middle and used her Russian navigational skills to flawlessly guide us to the controls.  She has the uncanny superhero ability to orienteer without a compass. 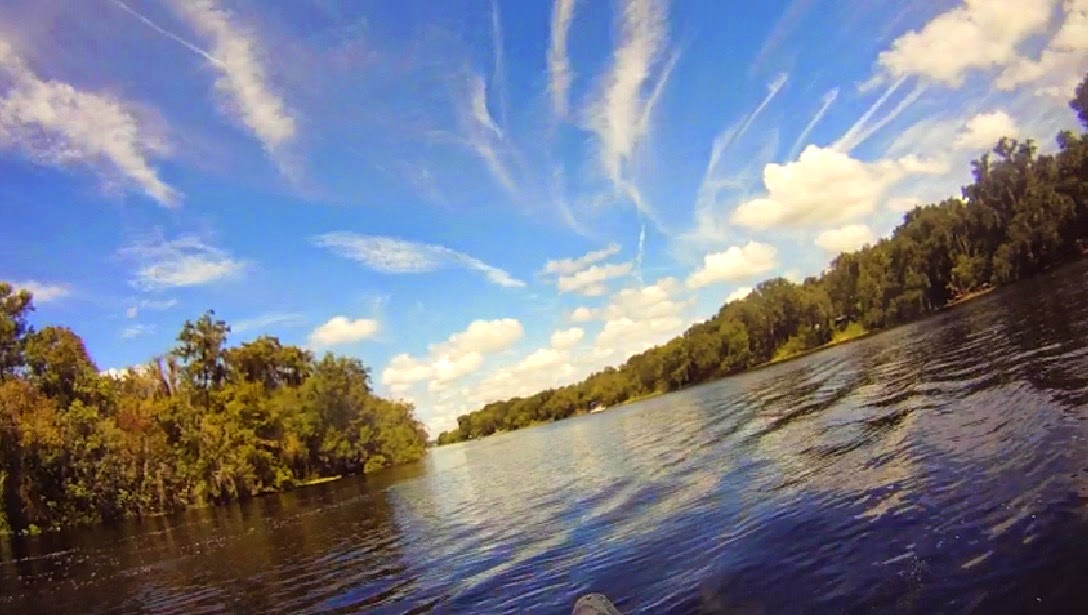 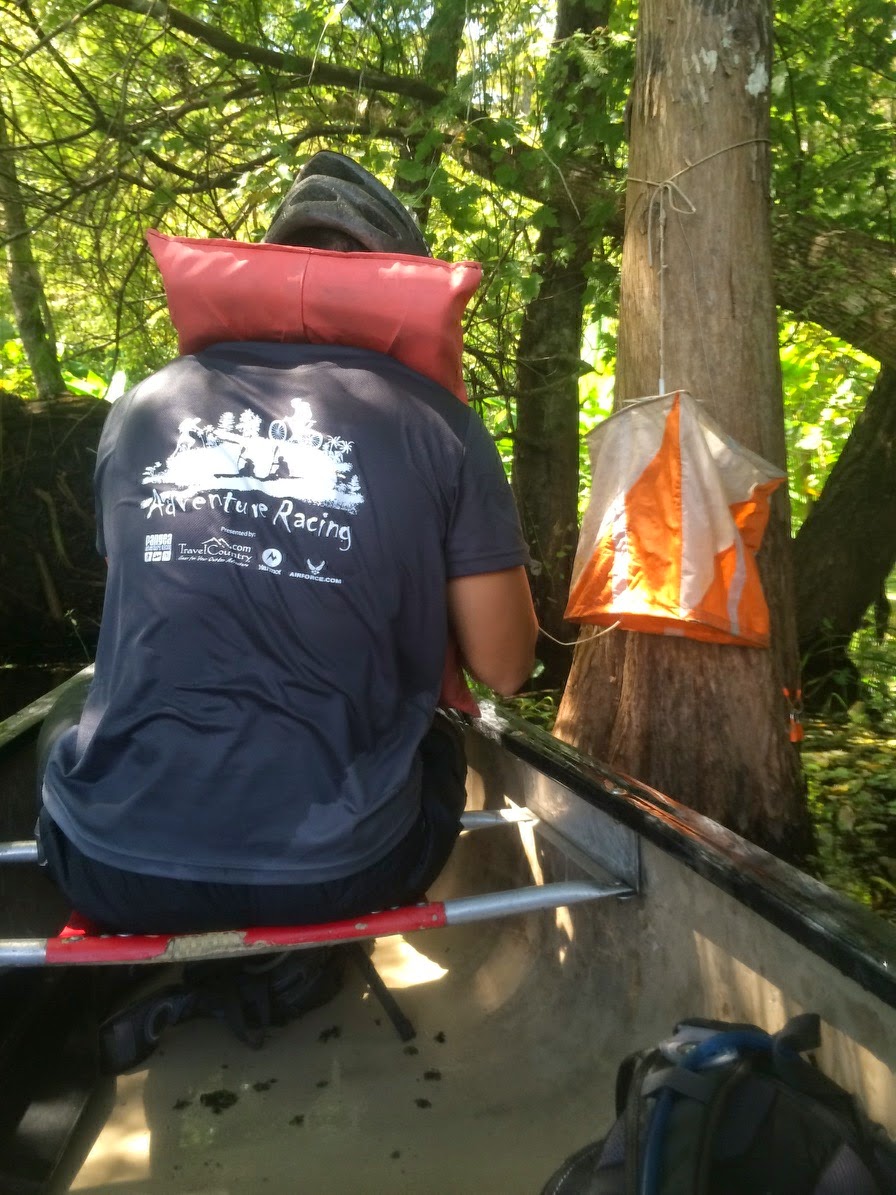 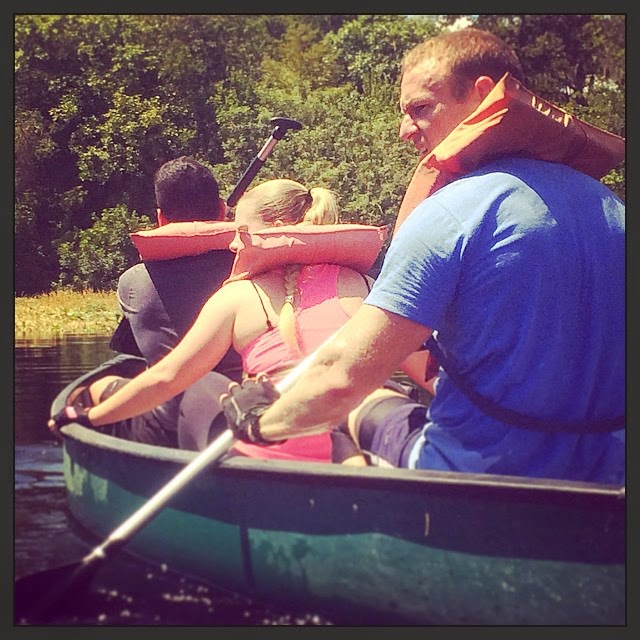 Heading up the "blue spring" river, we gazed at plenty of longnose gar fish, many of them 3-4ft long.  Depending on the season, locals will also see manatees drifting around. 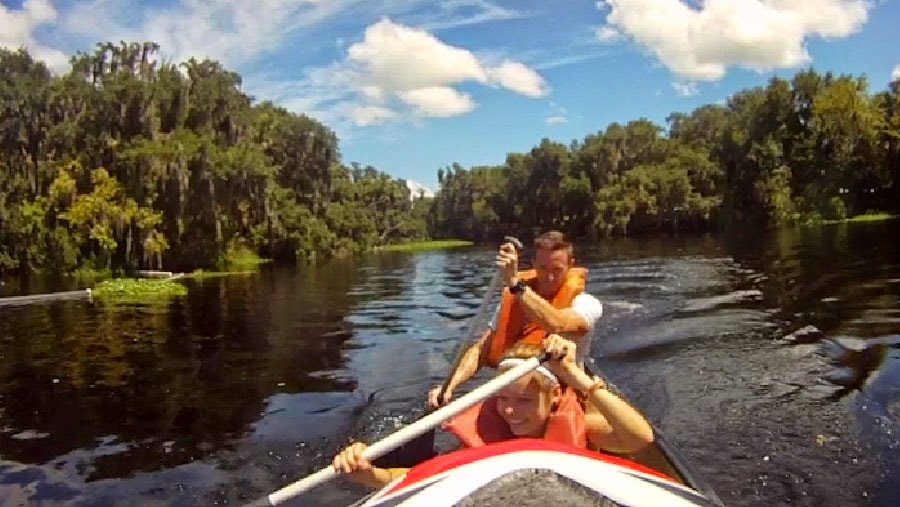 Bike
The biking leg consisted of riding out of the park to a nearby technical biking set of trails, finding controls along the single-track, and heading back.  Trails went left, right, up and down, with us ducking under tree branches and avoiding the fall into the abyss.

riding into the jungles of FL 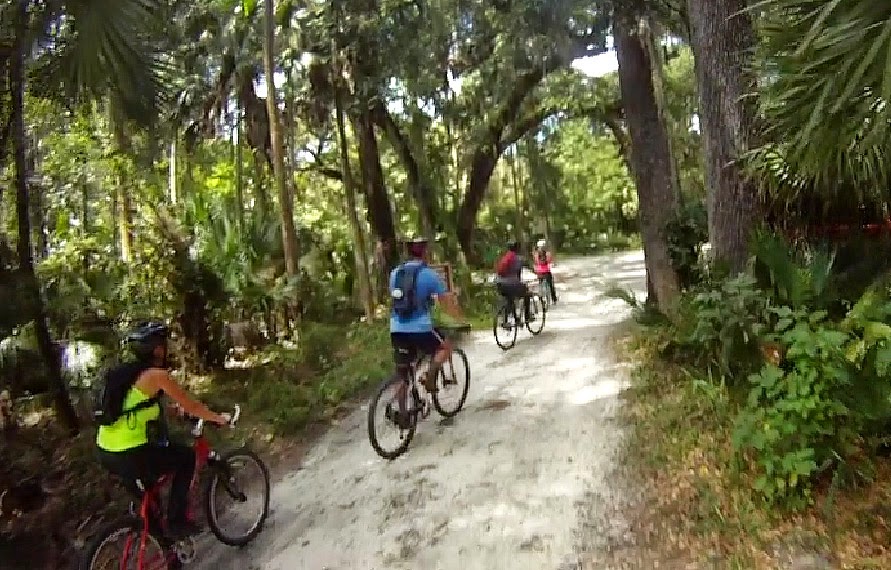 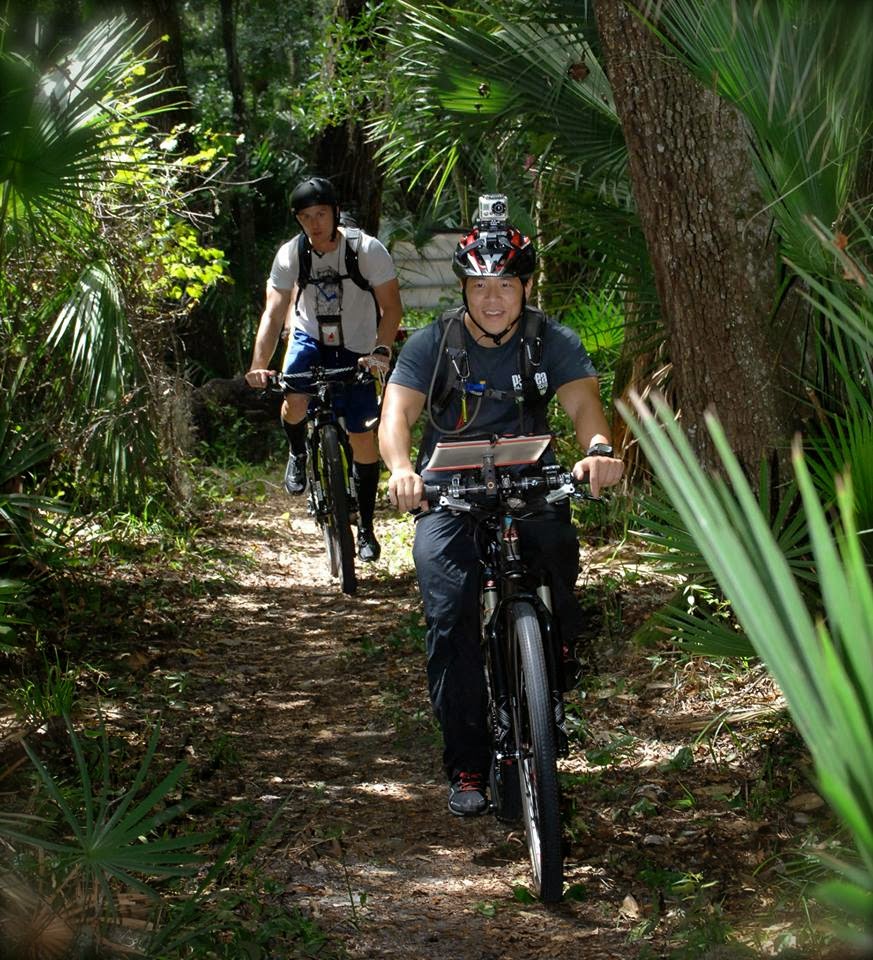 Despite this being one of the few times Anastasia had ridden a mountain bike, and it being off-road on top of that, the Russian mindset in her came out as we offered to help tow and speed things up.  With a heart rate at 190bpm, "No!  I must do this on my own power!" she would reply--an admirable attitude characterized by many Canyoneros in the past, indeed.  Win or lose, we give it all we got! 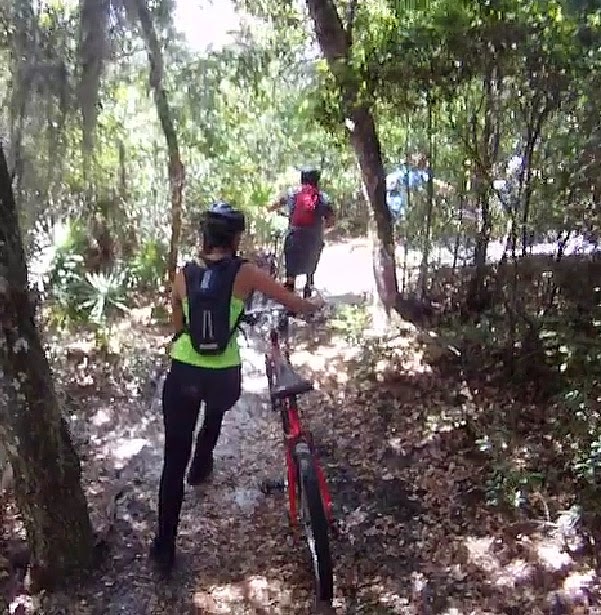 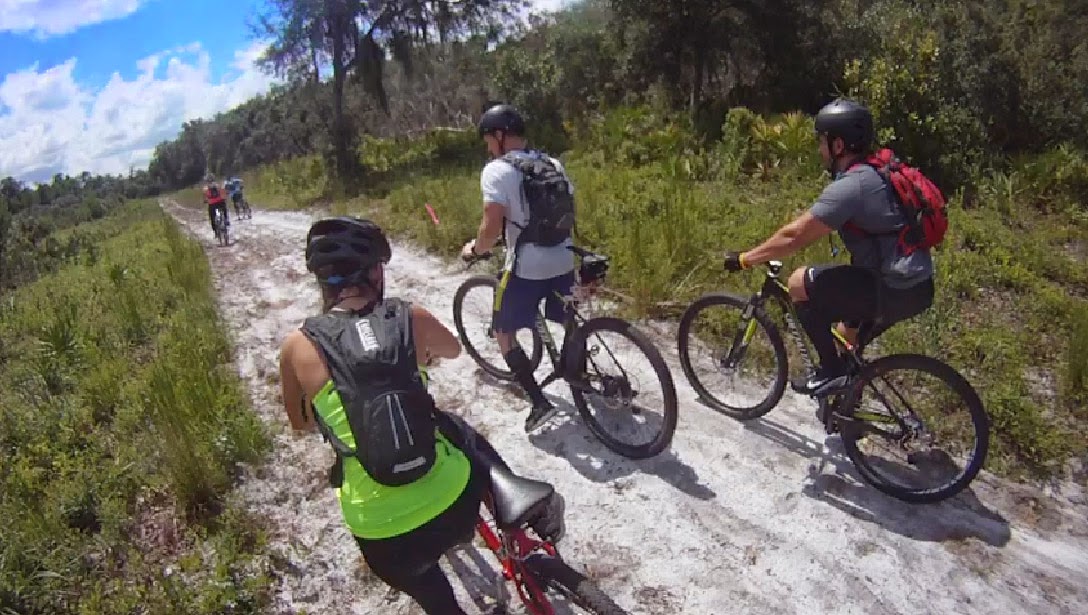 Tubing
Unanimously voted to be the funnest section of the course, it was also the most refreshing ending to the heat-filled summer day.  There were four controls here.

We all grabbed a deflated tube at the Main TA and blew them up as we spent 10 minutes walking along the boardwalk, towards the tube launch.  Russell used his superhero lung muscles to blow up all the tubes for the team.  Everyone took cue as I showed them the fastest, most effortless way to tube upstream and down the river--sitting on top of the tube and paddling backwards with your arms, a technique we learned at last year's Superhero AR.

CP20 was quite unique, being underwater 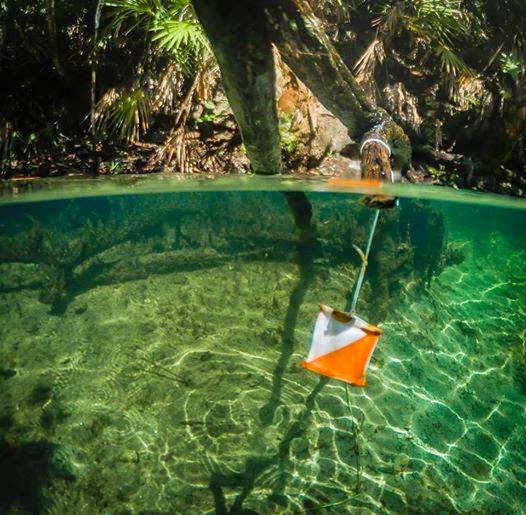 Conclusion
As the race wrapped up, I believe a co-ed team ahead of us was penalized for starting their race before their proper staggered time, so we jumped ahead and took 2nd place in the premiere co-ed division.  This was icing to a day filled with a variety of exercises that kept monotony out of the agenda. 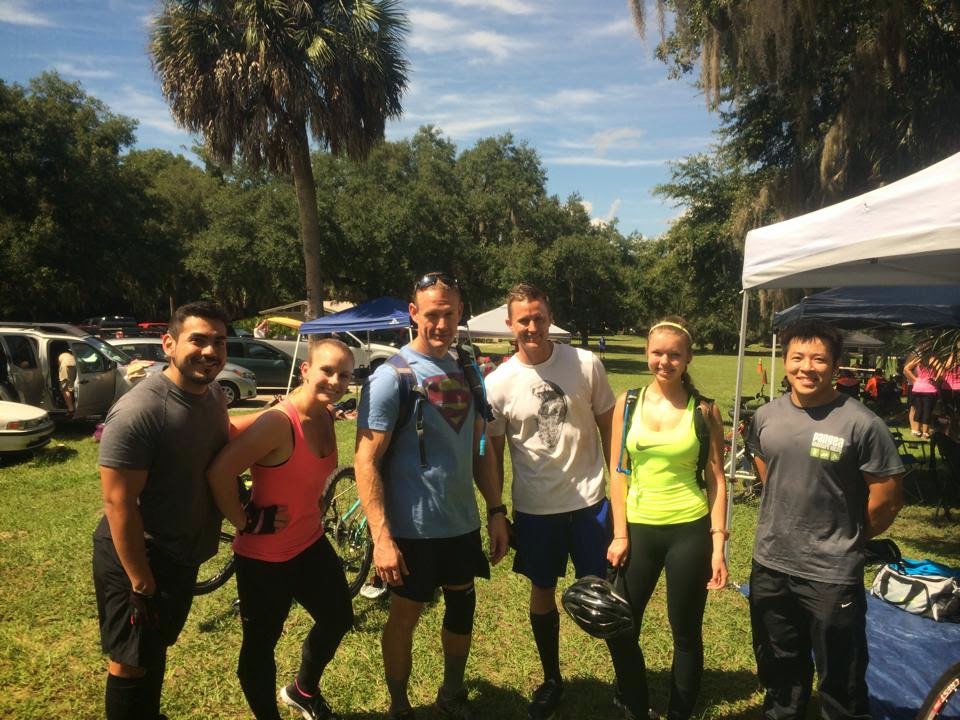 stones as trophies - Pangea Adventure Racing comes up with some of the most fitting and original awards! 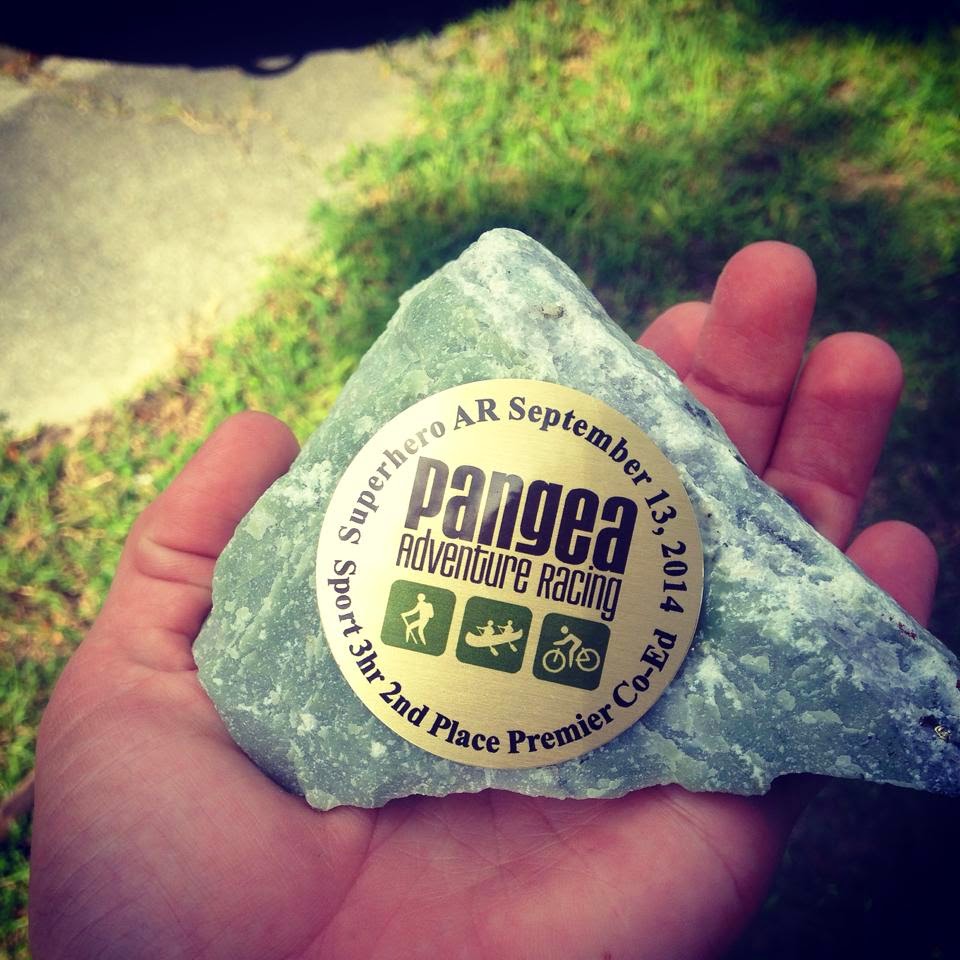 We celebrated at a nearby Texas Roadhouse, where we witnessed Juan Chavez down a 23oz Porterhouse with his superhero ability of eating steak with just a spoon. 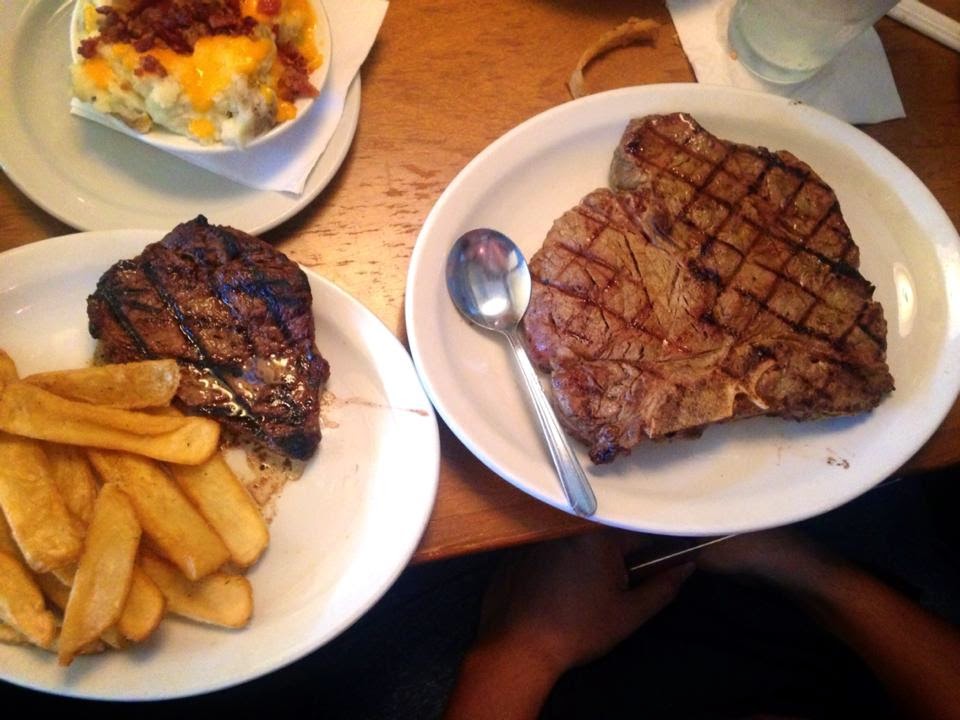 Congrats to team Newcastle Boyz! for their 3rd place overall victory, led and navigated by my usual teammate, Nathan Whitaker, also with brand new racers.  We all had a blast at this event.