Off The Grid Racing - The Cauldron 36hr 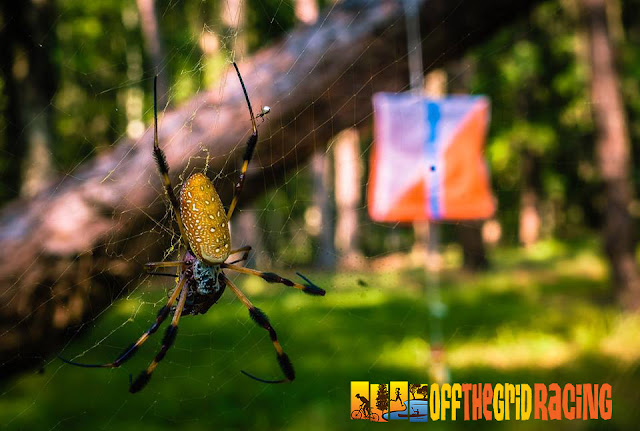 This was a race that was billed to be the most brutal Florida-heated adventure race ever.  It was in the summer of July and was 36hrs long.  Of all people, Nate was the one who convinced Greg Watson and I to race this one!  This was his race of redemption, he said, for severely overheating in a 6hr race two years ago, at Pangea's Treasure Coast AR in Hobe Sound, FL.  He wanted to face his demons and take us on a ride with him, and do this in a grand 36hr fashion (yes, that is 6 times the length of the one he got broiled alive on).


giant maps, accompanied with dozens of supplemental ones

Erik Wise and Mark Schweder, the race director and course designers, gave us a unique experience.  There would be only three legs of race.  Once you're done and checked in with one leg, you move onto the next, but you could not revisit a previous leg to find more controls.  This meant you'll be on bike, foot, and boat, for a very long period of time.  We underestimated how much water we needed to carry at times but the water jugs that were brilliantly scattered about were saviors.  There were probably enough control points to fill a 72hr race, so we picked and chose whichever controls we thought we could easily find.

Most teams started on trek, except three, including us.  We let Nate choose bike first, since he's most prone to overheating on bike.  The race started a little after midnight, a night buzzing with insects and drizzling with rain for an hour or so while we scrambled to plot controls and strategize maps. 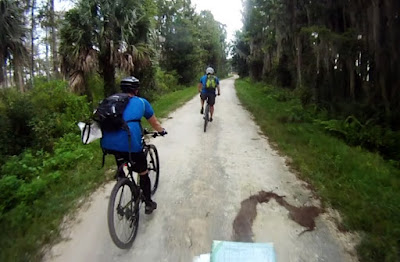 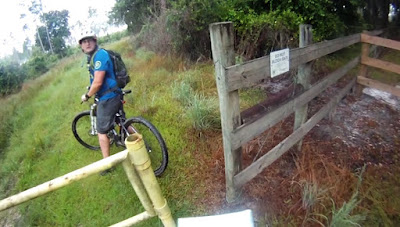 In the middle of the night, we were going up a narrow path between two fences.  The path was littered with trash and overgrown with vegetation.  The clue was "rubbish pit" so we had a hunch we were in the right location.  Far in the distance, I spotted a dozen glowing eyes that seemed to be headed our way.  "Dogs!  Turn around and run!" I silently screamed.  You don't know what kind of dogs people out there own.  The trash and entangled plants didn't help us move very fast.  Next thing we saw were giant horses to the our right.  It spooked us a bit, but once we realized they were harmless horses who were curious to see us, we were relieved! 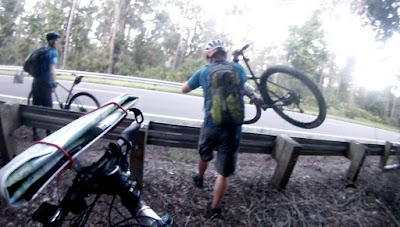 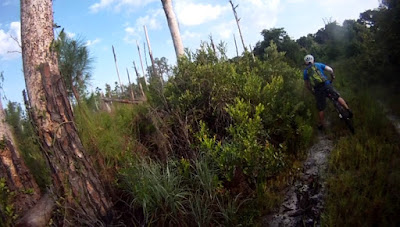 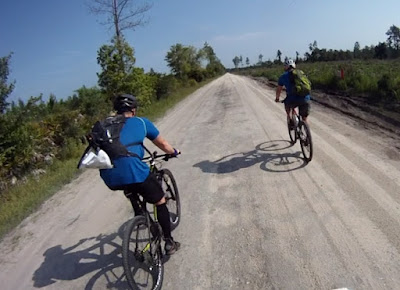 Further along after sunrise, we had just found CP44, about an hour away from civilization.  Nate and I completely ran out of water.  I noticed that on the map, there was a water cache deeper in the wilderness about 30 minutes away.  At that point, we made the decision to go forward and find the water cache, instead of the backtracking an hour to the known city.  The off-road trails varied from bumpy hard-packed to muddy sand and grassy terrain.  It wasn't smooth.  It continued to eat away at our dehydration.

Nate was spiraling into heat exhaustion (red cheeks, profuse sweating, and rapid heart beat).  His temps read 102F at the wrist.  We took little rests here and there under the shade while I worked the map.  Eventually we got to the location of the water cache, but I missed it on first try.  There were no water jugs!  Did someone steal them?!  What if a previously visiting team drank it all??  The worst-scenario thoughts kept our blood flowing.  I backtracked, recalculated distances with my pedometer and found another trail to go down.  Bingo, found it!  It was amazing.  We refueled and re-energized here. 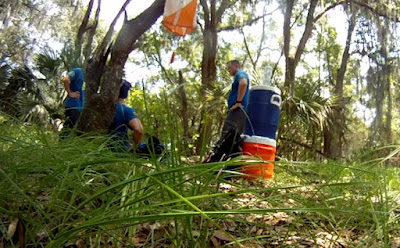 There were a handful of controls where there were missing trail illustrations on the map.  I never used the 50 or so supplemental bike maps provided due to the inconvenience of map fumbling, but we made some great guesses at which trails we should go down to find the controls.  Greg had some incredible vision to spot many of these from far away, and some great trail memory to get us out. 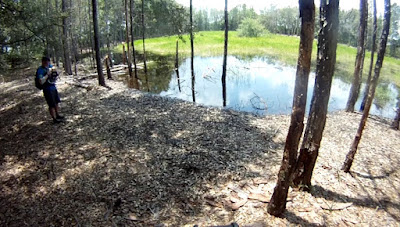 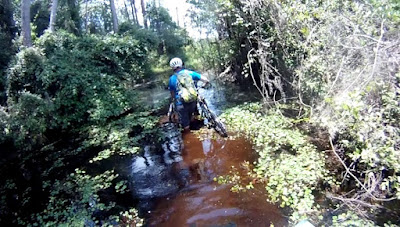 The heat continued to beat down on us.  It was like breathing fire from an open oven.  The pace slowed considerably during the day to keep the heart rate manageable.  We were sweating more than we drank water.  We had to ration what water we had. 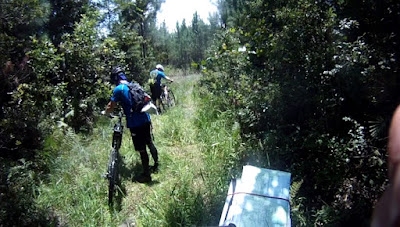 It took us 15hrs to finish the biking section, across a distance of 147km (91 miles).  And we didn't even find all of the controls.  This would be the longest any of us have biked continuously, on a time-basis.

This far into the race, it was tough to jog.  We walked about 90% of this leg.  Doing so allowed me to be pretty accurate with navigating.  I actually used a few of the supplemental maps provided.  We nailed most of the controls predictably and steadily.  The weather blessed us with a drizzling overcast rainy condition for when we started this leg in the afternoon.  Along our trek, we caked our shoes with mud which made things a bit uncomfortable.  Greg made some great calls on washing the mud out of our socks and shoes at a well pump that we found.

There was one control that got the best of me, which was the mandatory CP11.  We found CP10 easily, and my plan for getting 11 was to follow the river channel back northeast, cut across to the other side near the bridge, and then follow it right back down.

We found the "pole bridge" but there was no punch to be found.  Confused, I took the team to three other attack points in the trail system to re-confirm our position and every single time, we found the same pole bridge again.  We even bushwhacked straight between trails, through dense and thorny forestry, from known intersections to try to find this.  Now it was totally dark and we had burnt 2hrs on this control alone.  Finally, Nate commanded I re-read the clue for CP11, which was "write down the numbers located on the pole bridge"!  This was a control where you had to write an answer down, not punch the card...ughhh!  I felt for the Ecuadorian team who spent 4hrs trying to find it while we were there too. 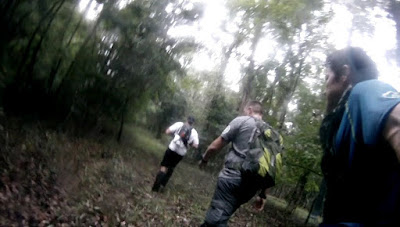 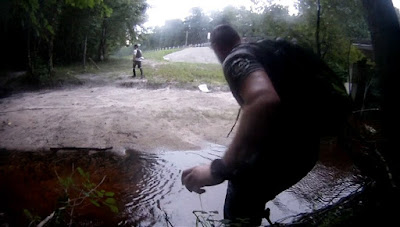 Deep in the night, while trekking through the northern end of Newnan's Lake, there were strange animals in the woods that appeared to quack at you in a bizarre human voice.  We saw hidden deer cameras behind tree foliage and iridescent plants.  There were plenty of armadillos running along our path.  The night had a awe-inspiring mystique to it.  One of the controls was even in a cemetery for a ghostly setting.

Worthy to note too is that this is the most I have ever prepared to combat bug bites.  I sprayed my clothing down with Permethrin, used bug patches, and wore long pants the entire race, a highly effective measure in the past.  I still came out of the race with 40-50 bug bites!  Newnan's Lake has some of the most terrifying and persistent bugs around.  We even had a giant three inch momma spider come into our canopy tent and release 200 baby spiders before the race started.

After finding several controls north of Newnan's Lake, we started our journey back to the main TA.  Heading into the main transition area after about 14hrs of trekking, the team was wretched with feet blisters and ass chafing issues.  We had been trekking for some 45km (basically a 27 mile marathon) nonstop through the night.  It was mainly off-road with mud and sand to grind away the flesh.  We spent an hour at transition to refuel and to clean up. 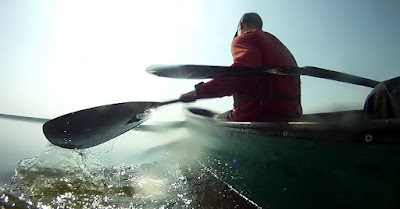 We had six hours left once we launched the canoe into the lake.  Nate did an awesome job plotting UTM coordinates for this section.  The number one goal for us was find the mandatory CP9.  Rules were, you had to find one mandatory control per discipline in order to be officially ranked.  With that in mind, we started our canoeing route by going south into the lower channel on Newnan's lake.  Along the way, we picked up 4 controls.  It got too gnarly with fallen trees and debris enroute to CP8-9, so we ditched the canoe and walked along the bank for both of them.  I had wanted us to get CP10-11 further down the channel, but with how hairy things got after CP8, we bailed out of the channel and went north to get two more controls.  In hindsight we should have banked more time on the canoe, as they provided the best bang for our buck.  Each CP was worth 3 points.

In the end, we got 1st in our division, 2nd overall.  Nate survived the incredible heat and lived to redeem himself.  We weren't banking on high expectations, but as we've seen, historically, as long as we're steady in the race, we seem to do pretty well.