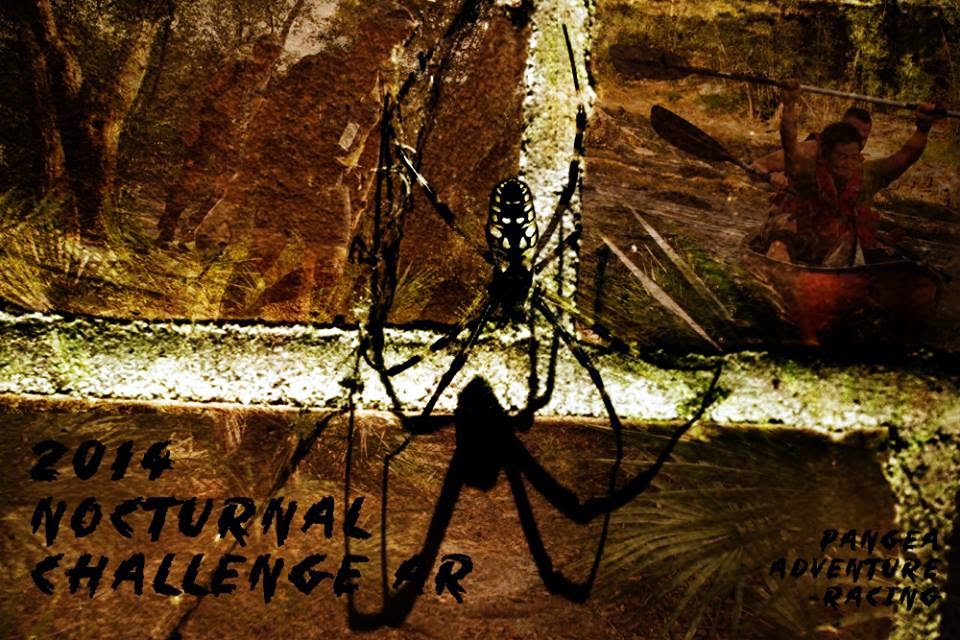 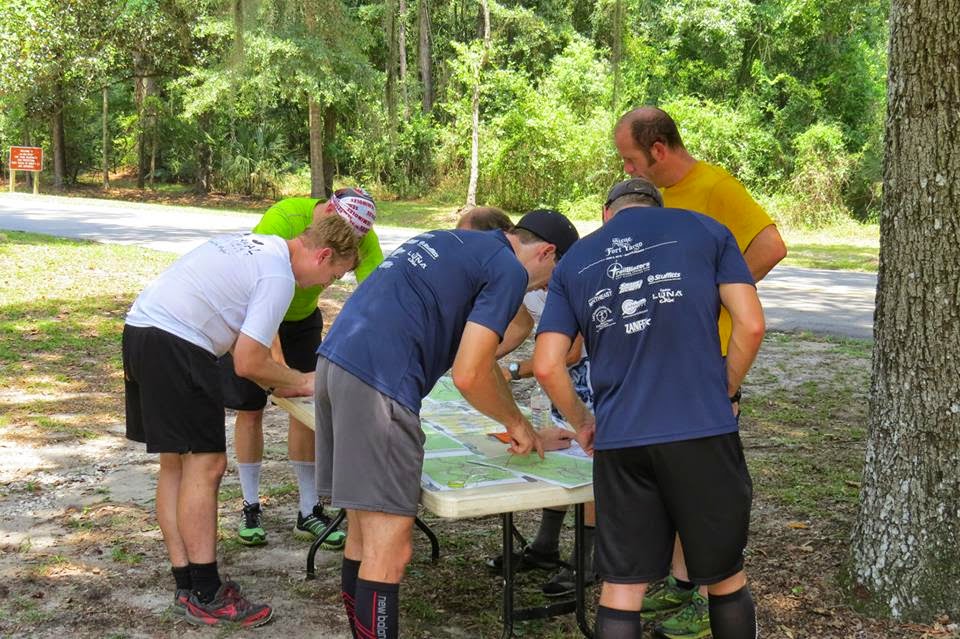 We arrived at Stephen Foster Folk Culture Center State Park, and I immediately noticed my bike tire was completely flat.  Along the way, my tire was apparently rubbing a crank set or something.  Team Wet Feet AR was gracious enough to lend us their tire pump for me to fix it.  At first, I tried patching the tear in my tubeless setup (there was no sealant left in it).  That wasn't a complete fix, as I was still hearing air seep out.  Then I converted it back to a tubed tire setup.  As luck would have it, my tube had a tear in it too, probably from many races of other gear rubbing up on it inside my toolbag!  Nate then gave me a spare tube he had and it worked fine.

race maps with no race notes :)

I typically always do all the map planning, but that incident forced us to have Tim do the map planning.  On an 18hr race, you really need the entire 2hrs to plan the strategy and measure distances.  After fixing my bike, it was a little too late to switch me back to race strategizing.  I would have to rely on spontaneous FLO orienteering skills.  To throw a wrench in it, there were supplemental maps available that provided extra information.  We did not have time to copy any of it down and it would screw us for many of the more difficult control points, as well as lengthen a lot of our distances on trails we did not copy over.

heading out of the park to get into the wilderness 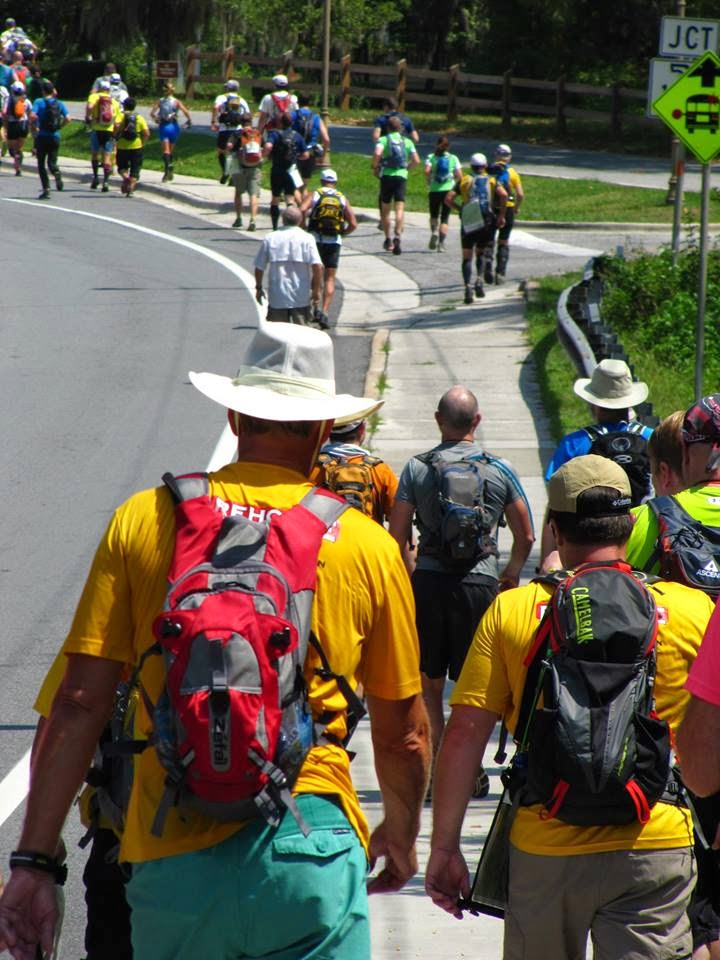 We could not recall a hotter race start than this one, which began at 100* F.  Nate's body temperature, as measured at the wrist, peaked at 101.5* F, and that's supposed to be at his cooler extremity!  Needless to say, this was the first race I had opted not to carry my GoPro helmet around and even had to roll up my bushwhacking pants.  We were breathing fire and had the heart rate of a runner during our walking to conserve energy. 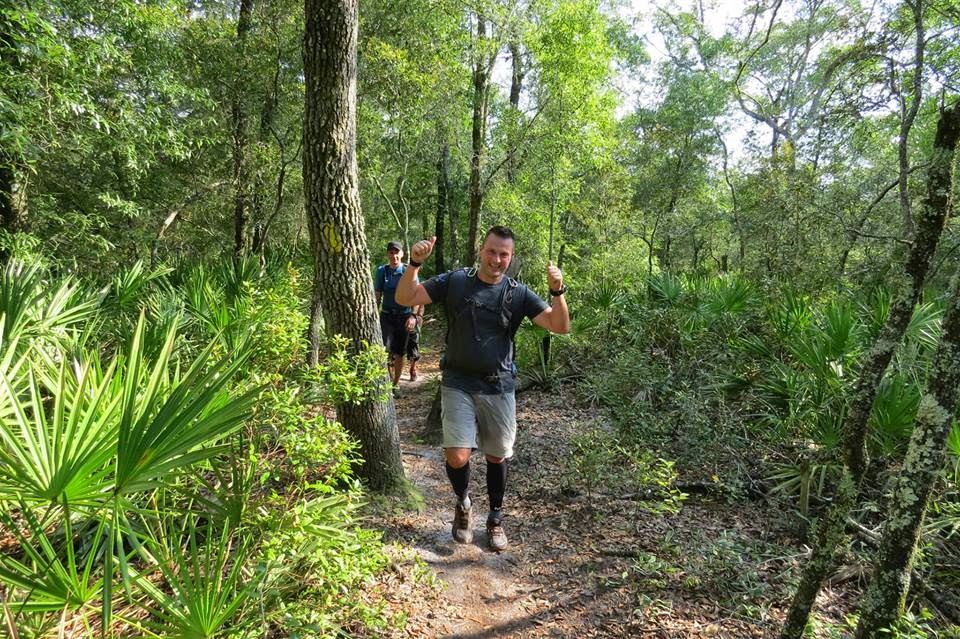 The control points were located with relative ease and with the pack clustered closely at the beginning.

reminded us of Georgia's rapids 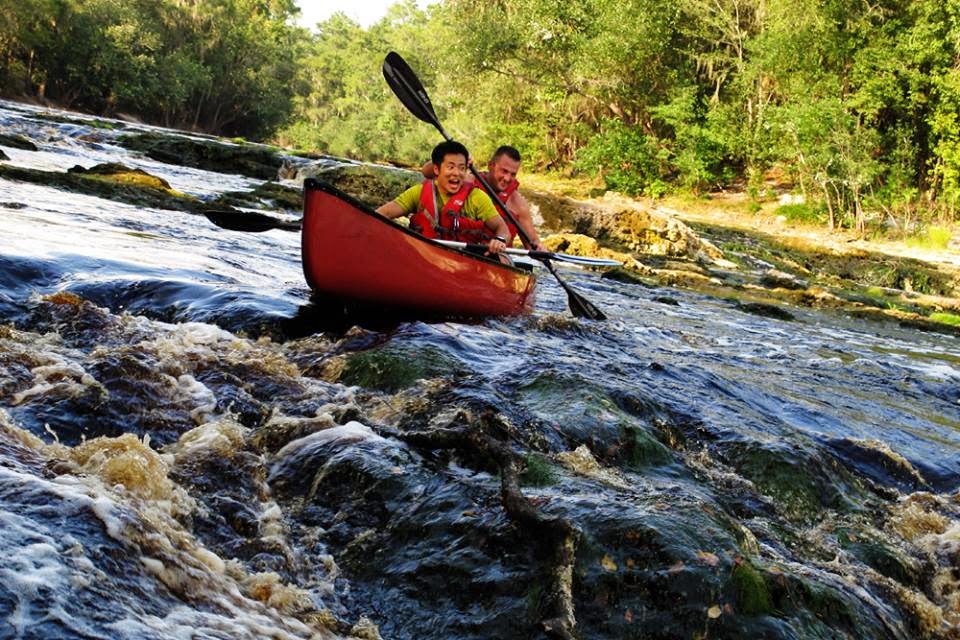 This park touted to have one of the highest class rapids in Florida :)  It was a joy to know Florida actually had rapids, since there were no mountains around to roll the water down into a river.

which way is correct? 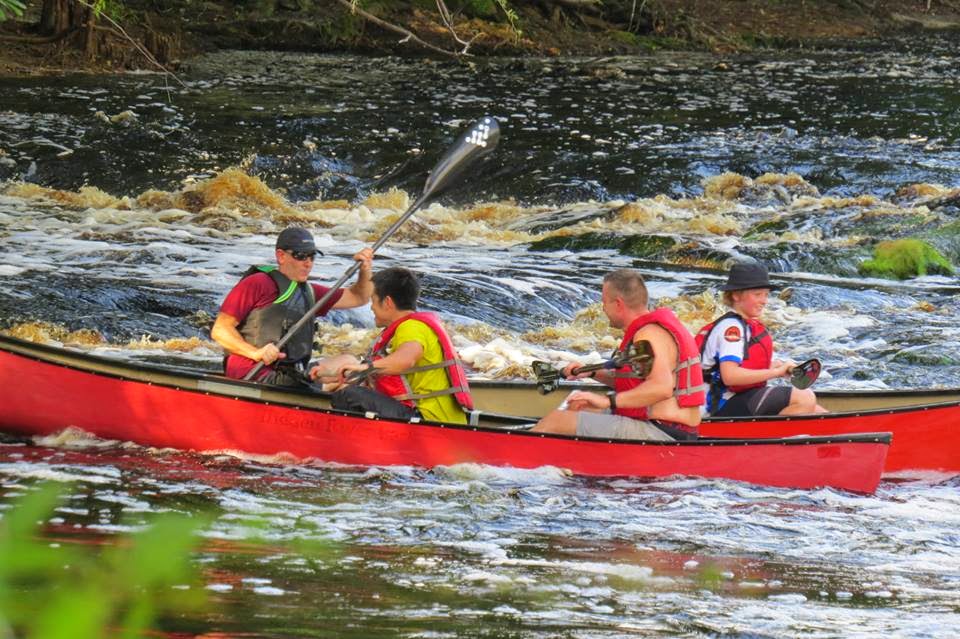 It was quite leisurely, paddling in the warm, coca-cola bronze-colored river.  We picked up 3 control points on route to another transition area about 13 km away.  Tim was knocked out of one of the rapids we went down, and so followed us along the shore until we cleared the area. 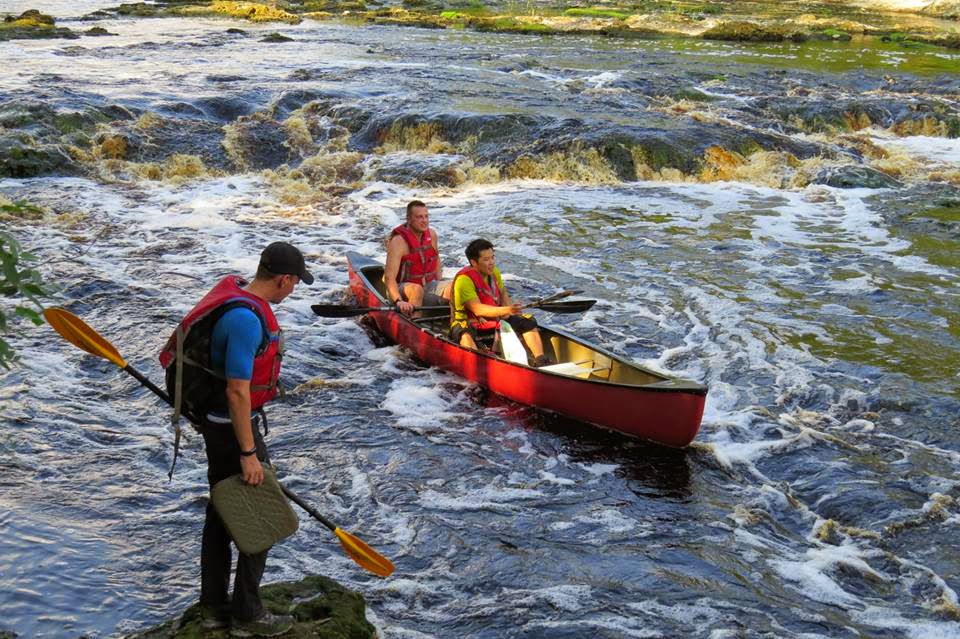 Bike 1
It had gone nightfall by this point.  The cooler temps were of great welcome.  CP11 immediately shook us off.  I felt like I had done a great job following every turn, but then as our GPS confirmed, the turns didn't follow the map's blue trails.  I kept trying to find an east-to-west U-turn that had a 40m diameter (near CP11).  Either we got derailed off into another trail, or the blue lines didn't exist anymore.  Lots of teams gathered up here, looking for it.  After spending quite a lot of time on this one, we called it off. 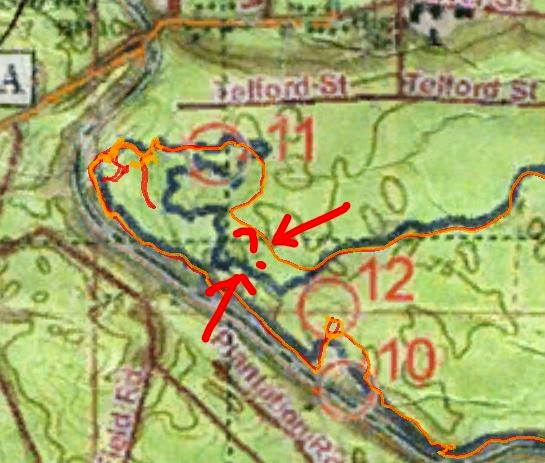 The rain-heavy clouds passed over our heads and released a torrential downpour as we biked over to the 2nd orienteering section.  Visibility was at best 10ft, and as lightning flashed the dark night up, cracks and roars of thunder followed, some very close to us.  I had visions of trees falling over on us, it was that close at times.

The rest of the biking controls didn't give us troubles until CP17 and 18.  On control 17, I just didn't measure the trail length correctly, so we ended up looking for it in a few wrong areas.  We eventually found it.  Heading to CP18, we led a pack of teams too far and then followed it back to find the correct trail.  But by then, the other teams lost faith in us, had already separated from us, and were still trying to find it. 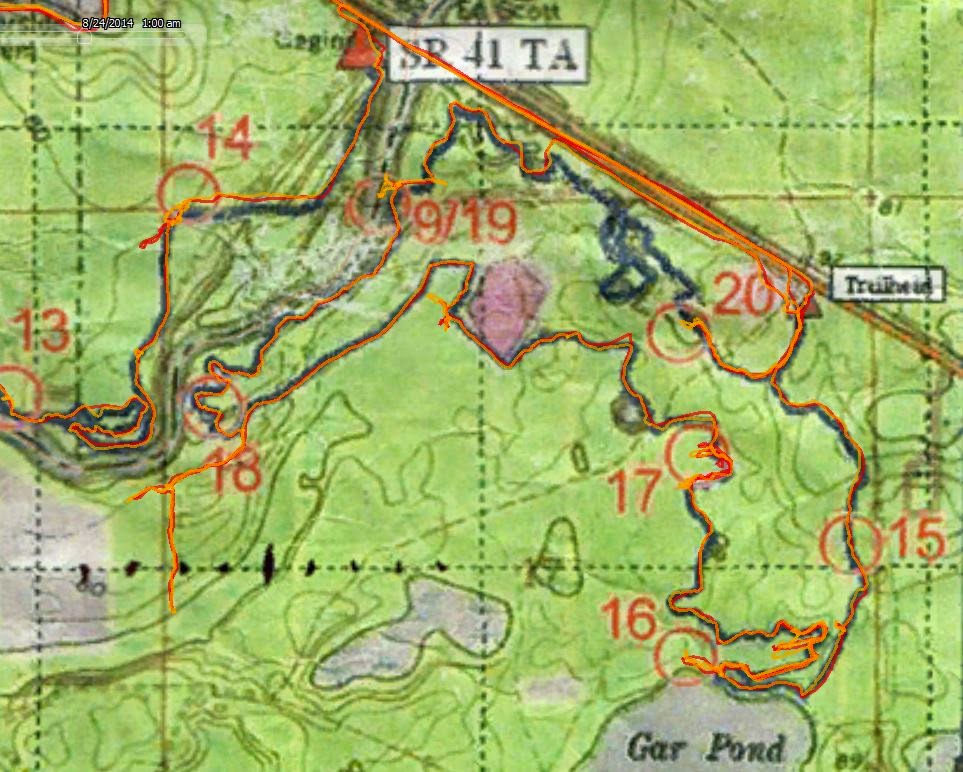 With CP11 eating away at us, the only control we had missed so far, we decided to bike back to its location, except try for a different attack that started at the trail head.  I wanted to go west from the trail head a pre-measured distance and then bomb down 150m to find it.  Telford St. did not exist though, not even a hint of trail, so we definitively called it off. 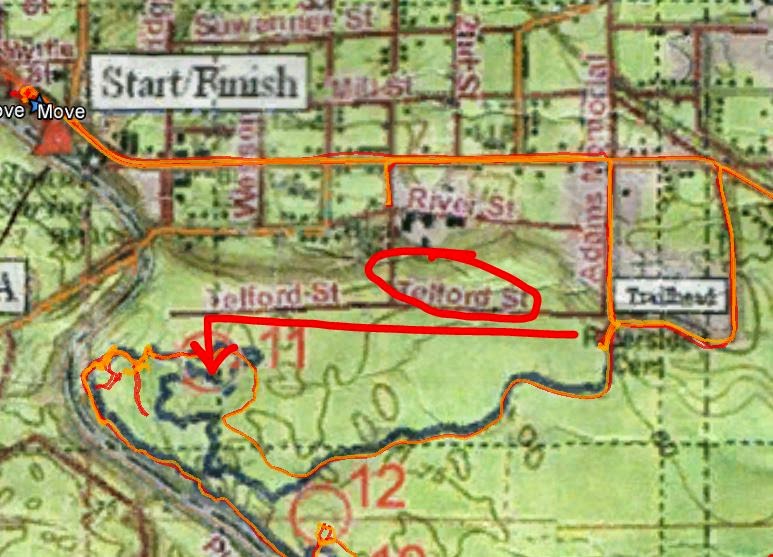 Boat 2
After finishing the biking section at the main TA, we walked off towards Stephen TA to start our 2nd canoeing leg.  There was no shine of a moon this night.  It was completely dark.  The only help we had was a slight glow from the canoes ahead of us.


Trek 2
I used the monotonous moments during the previous canoeing leg to strategize something for this trek portion.  Just one look at the map and I could tell this was going to be our toughest, navigationally.  It became apparent that there were missing trails on this map.  I had in mind to call off some controls here, since it would be an uphill battle without the extra notes.

We did find the first few controls fairly easily, and with the pack.  We generally do not like following packs, since it doesn't really teach us much, so as we headed towards CP26, I erred on the side of caution and led us south in a wrong location just to rule it out, which separated us from the pack.

As we headed for CP27, I told Nate this would be a "hail-Mary control, with a 5% chance of me finding it."  We didn't find it, but my route of getting us there, while finding CP36 first, put us almost on top of the control without seeing it in the night!  The clue was some abandoned biking trail, but it was all pretty overgrown out there.  Lots of time was spent here.  This one demoralized the team, and I could sense us losing focus as we mainly walked it from here on out. 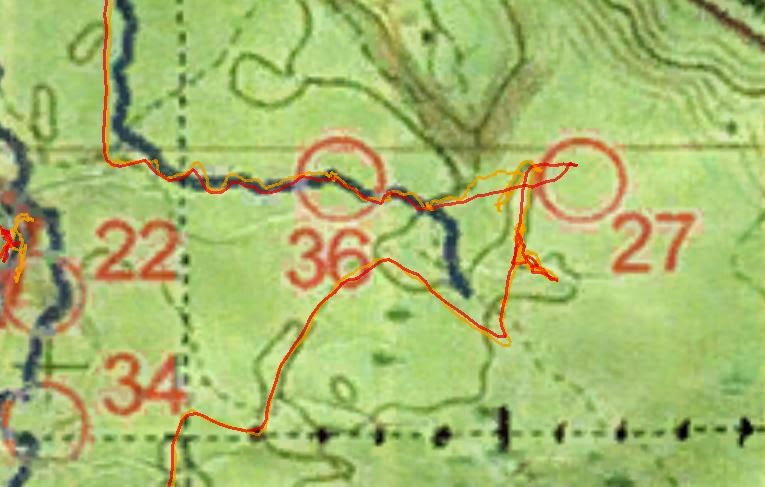 CP29 surprisingly took us a long time to find, so we skipped CP28, which looked like it branched off a missing trail we had forgotten to copy again.  With the rain occurring overnight, a couple of us experienced some debilitating chaffing while we walked it back to the main TA.


Bike 2
After debating the physical conditions the team was under, we decided we could easily pick off two more of the closest biking controls on this leg before ending the race.  They were pretty fast and easy to locate.


Conclusion
There were a couple 'firsts' for us in this race, but we wanted to try it out to see how we could cope with it.  As navigator, I was not the primary map planner.  Therefore, I did not know how crucial it would be to copy the supplemental maps down onto ours.  For the most part, we didn't have time.  It proved critical, and it would have been just as important if we were navigating in the day.  From here on out, I think it's pretty certain that the navigator needs to do most of the map planning.

For 18hrs length of race, I don't think we trained enough as a team compared to our other races.  Coming off a high at the Atomic 30hr, we probably dismissed this 18hr as something easy, so unfortunately we fell short of our expectations as we finished lower mid-pack. 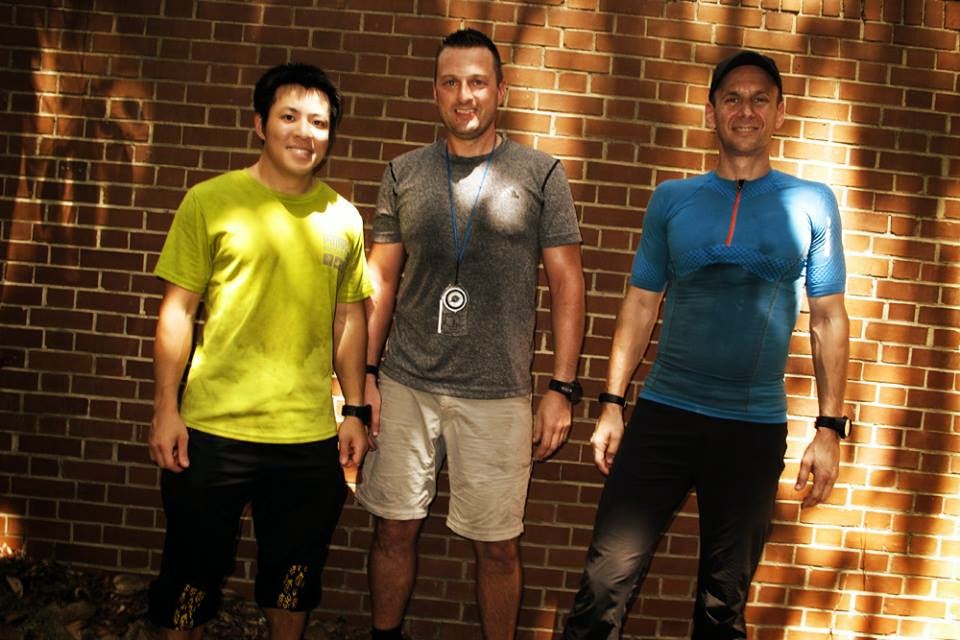