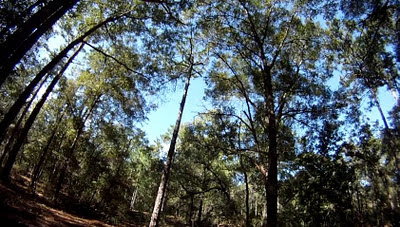 Immediately to the left of Wekiva Springs Park is Kelly Park.  It's a nice little enjoyable area with a small foot orienteering course.  Chris Roda and I decided to use this course to sharpen our orienteering skills and to attempt different tactics to find control points.  Roda had just finished running some 20 miles in the morning for marathon training and was still fresh to do about an hour and a half's worth of trekking and bushwhacking.  He took the role of navigator on this course.
(course map) 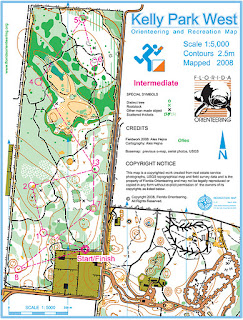 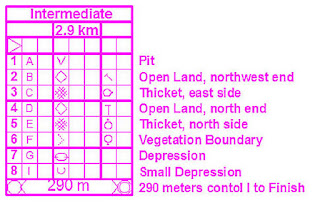 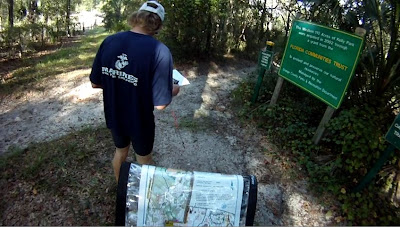 CP1 had us following a trail that ran along Dwight Schrute's goat farm :)  I had some new gear to try out--GoPro camera strapped to the head, which I just just bought the night before. 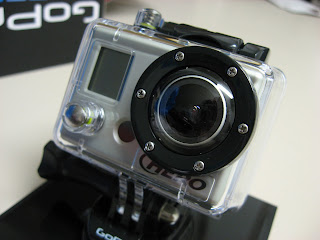 (goats and dogs on the left) 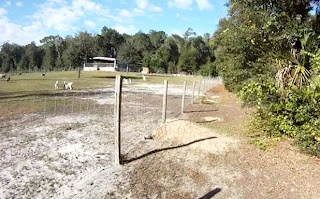 We followed the foot trail all the way until there was a hooking bend.  Once it bent southwest, we attacked into the woods with a precise bearing to CP1.  There was a clearcut sinkhole.  The hint was "pit," so we figured the control point would be down inside the pit, it was right outside the pit.  The CP was a brown fence that could easily blend into the forest.
(Here's a video of us finding CP1, showing off GoPro's capabilities.  Youtube doesn't keep the quality well.)
We attempted to go about CP2 by heading north to hit the trails, follow it to the distinct thicket, find the man-made object, and then bear W-NW to find it.  It turns out we incorrectly identified a sign as the "thicket" and headed up from there.  We ran into a distinct tree and a different man-made object (bench) before realizing we veered off course.  We corrected ourselves, bushwhacked west and found the CP.
Here's the paths we took for the rest of the CP's (in blue). 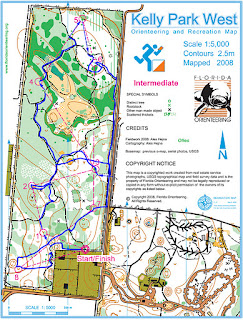 We tried to carved a straight path to CP3, but overshot and ran into the bordering fence.  The white opening wasn't very apparent in the real world.  Looking at the map, there was a trail just about east of CP3, so we used that as an attack point to enter the forest again. 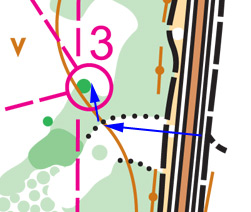 The straight path to CP4 provided the longest section to bushwhack through, with a mess of identifiable features on the map.  Even though the map was beautifully illustrated, things are very vague in real life.  Experiencing how disoriented we could get bushwhacking through woods and trying to keep a straight line on mapped clear forestry, we opted to use the trails to get to CP4.  If you think about it, you can probably run four times as fast on a clear trail versus bushwhacking through shrubbery.  That means you should choose the more accurate path that could be four times as long as the direct straight path that cuts through forestry.

If medium green sections on the map proved challenging to trek through, dark green was supposed to be even thicker.  On map, the dark green section seemed small, so we cut through and it turned out pretty easy.  On the trail, we headed up the path to the intersection, found the two distinct thickets, and configured a bearing to shoot into our CP.  I looked at the correct thicket for a while before Roda came over and found the CP on the far, north side of it. 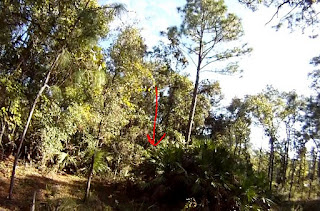 CP6 was in a strange spot.  We did everything correctly by heading south from CP5, finding the distinct thicket on the trail that headed east, and attacked southward.  After 5minutes of scouting the area, we still couldn't find it.  It wasn't until Roda ran along the trail on the east and found another attack point at the bend in the trails, that we found it. 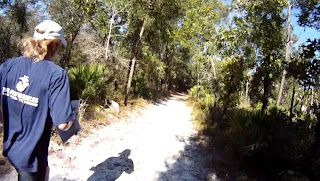 We took the easier trail along the border to hit CP7's attack point.  It was the longest stretch of trail running on the course.  We used the T-intersection across the road to attack immediately west into CP7.


(trail running using the fence on the left as a handrail and using the sun's position to determine it was exactly 10:42am) 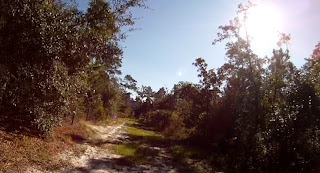 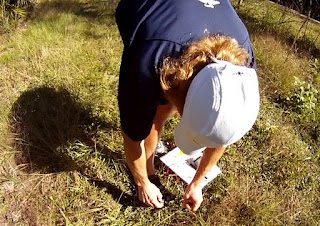 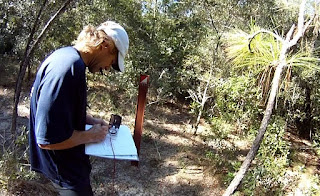 At this point, we had gotten better at bushwhacking.  It wasn't a clearcut science to us yet, but Roda kept mentioning how we were representing for Canyoneros, and it wasn't right if Canyoneros didn't use some muscling to get through things.  I think he talked of getting a machete for the race :)

From CP7 to CP8, we bushwhacked straight to the trails, and inward to the destination almost directly.  CP8 was located in between two depressions, depicted in pic below. 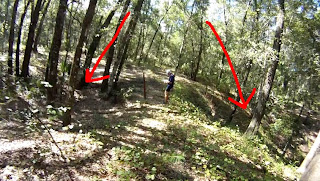 CP8 to the finish was a sprint to the end.  We followed Schrute Farms while the dogs chased and cheered us to the finish.

Info on and Directions to Kelly Park
http://www.floridaorienteering.org/directions/Kelly.htm