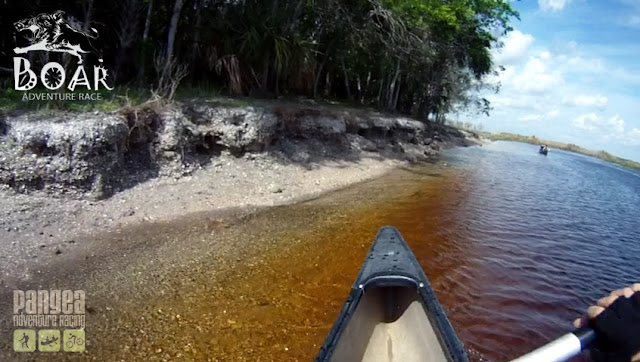 Two Canyonero teams, 8 bikes, and four canoes, would stick together until the end.  We had formed a bond within the past year, characterized by a wide variety of inspiring physical abilities.  Adventure racing would be our next frontier.

Orlando Wetlands Park contains beautiful, and in many places, surreal environments that capture what my image of a Florida park looks like.  We even saw a handful of gators hanging out along the wetland trails. 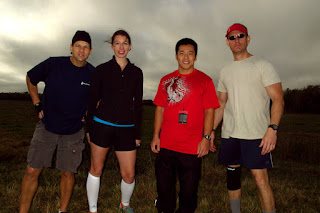 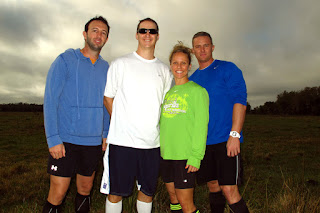 PreRace
We all got to the venue very early.  Greg and I went over the maps, while Roda absorbed and chimed in.  I tried to measure out distances on control points that did not have as strong of attack points nearby.  The map provided was a Google Earth satellite image, slightly rotated in the software and then printed out, so that the scale was not the same from bottom to top.  6hrs was the shortest race Canyoneros have experienced to date.  6hrs is shorter, but definitely not easier--it is intense. 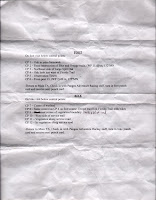 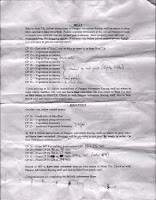 Foot
Both Canyonero teams chose to do the foot section first, except Canyoneros II was staggered 5 minutes ahead of us.  They decided to just wait for us at CP1.  CP2 went by quick, CP3 was a little bit more difficult, but CP4 gave us some trouble as we went in several areas along the trail to attack.  CP5 and 6 were straightforward, relying just on physical speed.

honing in on CP5 from the distant 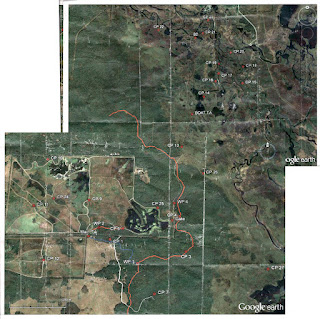 Bike
Roda checked us in and then picked up punch cards for the next section.  We mistakenly did not pay attention, so we inadvertently proceeded to the bike portion, rather than paddle as instructed--we did not realize this until Roda punched the first control point on bike.  By then it was too late, so we continued finding all the bike points, while punching our boat card.  If you ever lose a punch card or grab the wrong one, just make sure you punch something (a map, a different punch card, your shirt, etc).  The event hosts are usually nice enough to accept those, except sometimes they come with a penalty.  But if that's the best proof you have, then that's the best you can do. 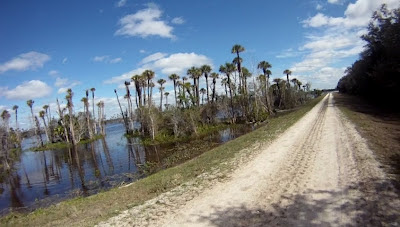 We headed towards CP7 by going from the Main TA, cutting directly across cow pasture towards the gated opening that leads you into the forest.  I'm not sure if that was the best route, seeing how badly it blew our quads out so early on in the race.  The cow pasture was a severely uneven ground with massive piles of cow shit every five square feet.  If you stood up and rode, you spent considerable energy trying to maintain momentum.  If you sat and pedaled, your ass was pounded on every bump.  The open area also slowed your speed with the billowing winds.


"Entrance of the Palms" 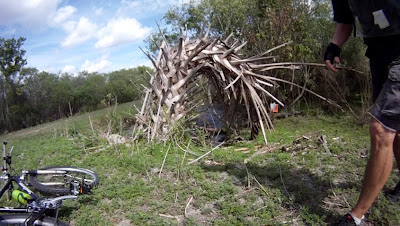 Rampage Roda arrived at the gates, ready to throw himself and his bike over the rails, until Amber told him to just pull open the gates ;)  Roda is a prolific marathon runner, always finishing with high rankings in prestigious races at Boston, Chicago, New York, and other major cities.  He trained so hard by biking in sugar sand for this race that it made him a speed demon at this event because we had no sugar sand!  He was also the 'Master CP Attacker' for both teams most of the event. 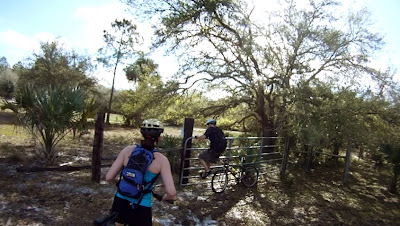 We backtracked and stayed on smoother grounds to grab CP8, which was a familiar CP.  CP 9-12 was a matter of bike speed.  It gave us no trouble.  After grabbing 12, we realized we were tracking well ahead of time and could afford some mishaps in the water portion. 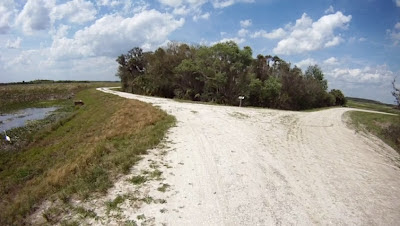 Back at the main TA, we got reprimanded for racing the segments out of order.  There was nothing we could do now but accept our penalty.  Greg Owens determined to restrict us from collecting four paddling CPs so the canoes could be returned on time for the sport racers to use.  Basically, we were given a four point penalty--HUGE!  It was such a letdown for the two teams, who had tracked so well with time so far.


Paddle
The distance of this paddling section was fortunately short, but playing field was amazingly complex.  I was glad they gave us Google Earth satellite images, rather than any other kind of map, because I found no maps ahead of time that illustrated all of the mini channels and temporary lakes there. 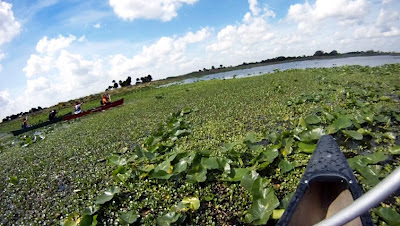 Tight water navigation is still pretty difficult for us to nail.  It was understood in the morning that we were going to cut CPs here, because of the uncertainty of our skills in this discipline.  We were coordinating together with four canoes across two teams in a discipline that most of us only train for at the few race events we have attended.  On top of that, we already were penalized by being restricted from collecting four CPs here.  That disadvantage turned out in our favor, actually, as they were the four more difficult ones to grab.  We probably would have gotten lost or spent a ridiculous amount of time finding them had we gone for them.

And then it never fails...we always have that one CP that messes you up good.  We got lost as soon as we went towards the first CP and spent a whopping 30 minutes overshooting, back-tracking, trying to find it, and finally finding it.  This was our first major setback.  Me, being navigator, did not fully grasp the sense of scale on water until this first CP.  Distances were a lot closer than I thought.  On the map, you can see that a line of sight could be drawn from the boat launch to the CP.  That was another way I should have looked at it--I overshot if I lost sight of boat launch area.  We finally recognized this one by the cluster of trees shown on the map. 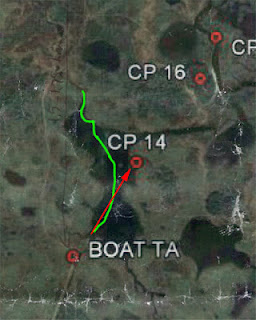 From there on, we grabbed the rest of the control points without any navigational errors.  Bear Island was the centerpiece of the paddling portion--it looked really cool.  Greg and Amber were the first to reach the island, and word has it, Amy ran and scouted the entire island in 30 seconds before finding the CP.  Amy has limitless energy and is supposedly regionally ranked #4 as a Crossfit athlete (I'll update this stat once I confirm it). 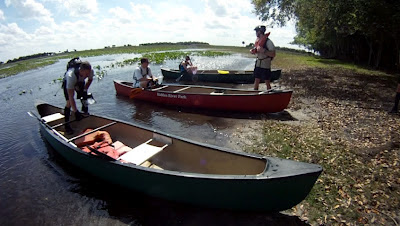 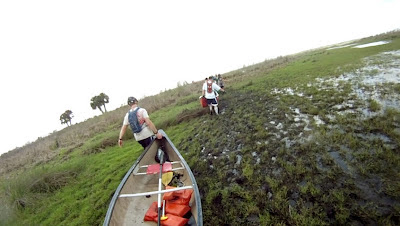 We spent 15-20min jogging from the boat drop-off to our bikes at the Boat TA.  With the time left, we regrouped and re-strategized what was left, trying to collect the best bang-for-the-buck CPs possible.  CP26 and 27 would be left for last, since it was most likely slower biking through grassy trails.  We decided it was best to grab CP24 and 25, hunt for CP28-32 on foot, and then collect 26 and 27 if time permitted.  Josh was hurting with a pounding headache at this point, so it was a time consuming ride back to the main TA. 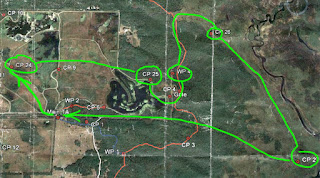 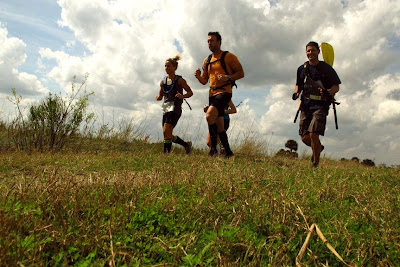 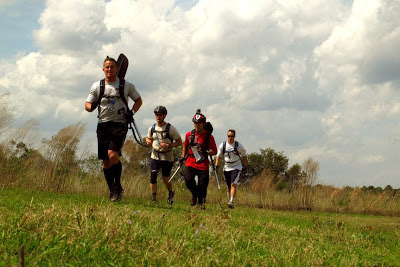 Bike/Foot 2
At the main TA, we refreshed and bolted off to find CP24 and 25 with no slowdown.  We then cut across the park gate near CP4 to head into the orienteering forest at WP4.  Amber was relentless on this biking segment. 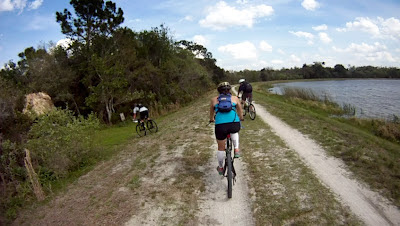 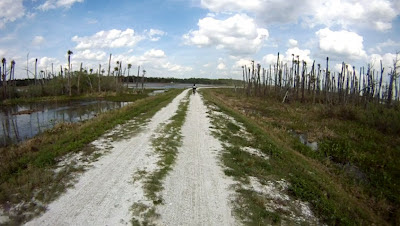 How much can wind slow you down?  On a hard packed dirt road, I was traveling on average 30kph.  As soon as the trail curved into the direct path of a wind head, my speed immediately dropped to around 20kph.  It was ridiculous. 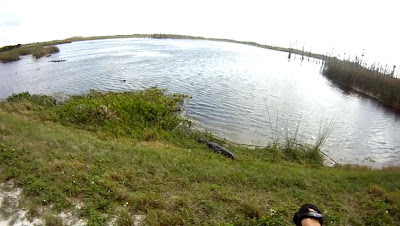 Going into the orienteering forest, we found the first CP, but Roda mistakenly read the wrong number, and so he thought we had arrived at a sport race's CP.  With a little more shuffling in the woods without finding another CP, I headed back out to the trail head to get our bearing for the second time.  Again, it lead us right to the same CP.  This time, Roda realized his mistake and punched it. 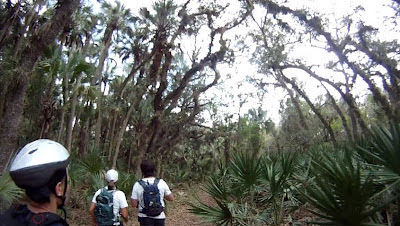 Next, it was my turn to make a navigational error.  Glancing over the instructions, I mistakenly read the distance as a bearing, and vice versa.  We lost about 5 minutes going the wrong direction, only to back track and re-shoot the bearing in the right direction. 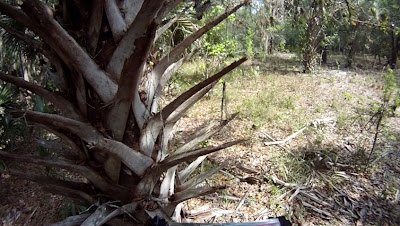 300m during a bushwhack is a lot of distance to get out of line with.  The best method I found was:

(video of me tripping)

After grabbing CP31 (second to last CP), time was ticking and Canyoneros II decided to jet without telling us.  We lost them.  I think they tried to beat us back or something.  Tricks!  Canyoneros(I) found the last CP, giving us the upper hand in scoring, and at the same time, went seamlessly back on path to head out to the trail head.  The way they designed the orienteering course seemed to resemble a circle.  If you bailed out at any earlier point, you probably would have gotten lost even worse, which is what happened to Canyoneros II.  Furthermore, they got docked a point for finishing late.  Had they followed us, they would have finished on time, even with their five minute stagger.  Lesson learned ;) 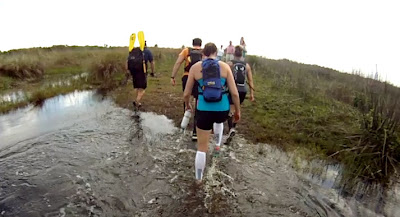 Conclusion
14th place out of 34 is pretty satisfying for us.  Upon reviewing our GoPro videos, there's definitely several areas where we could have picked up significant time (in the realm of nearly an hour), which could have afforded us the last two CPs we were allowed, potentially bringing our rank up to an extremely respectable 9th or 10th.  Physically, we know we have it in us to compete with the upper elite.  We just need to play out the experience game, fine tune our strategy as a team, and always look to improve.  Up next...12hr Nocatee!


mini-contests at the end displaying feats of strength--bike toss 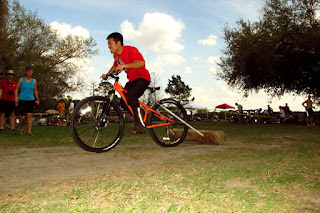