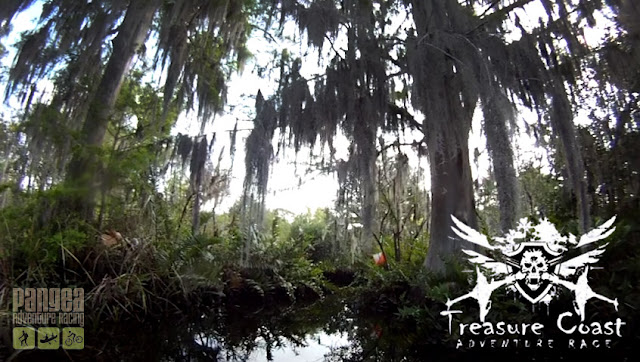 Nate and I woke up at 2am after a few hours of sleep on a Saturday morning while our significant others just about went to bed.  We embarked on a 3hr ride to Hobe Sound through the night, chatting up past stories of adventure racing and looking towards future ones, namely the 30hr Atomic AR.  We used the Treasure Coast AR as practice for coming into a race with absolutely no intel on the area--something the Atomic AR in Georgia would not allow us the luxury of.  Sure, we browsed Google Earth images, but everything looks much different on ground level anyways.  On top of that, we only reviewed last year's routes from other teams who had raced it.  As it turns out, the race was held on entirely different sections of Jonathan Dickinson State Park.  Good...this was the true test of the unknown for us.

We nailed every prologue and boat control point (CP) with speed and precision.  I use basic geometric visualization methods to hone in on the water CPs.  For example, if I rounded a corner, what kind of line can I draw to the CP and at what angle, both on map and on field?  Most CPs were located in a distinct feature, such as small channel off of a main river, so it helped identifying easier.


great to see pine trees that kept the forest open 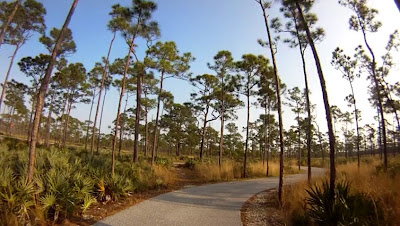 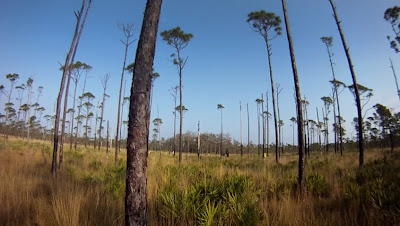 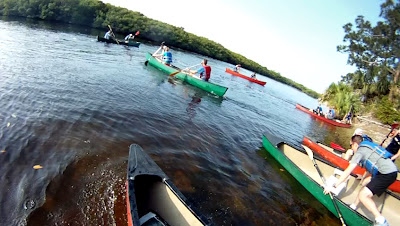 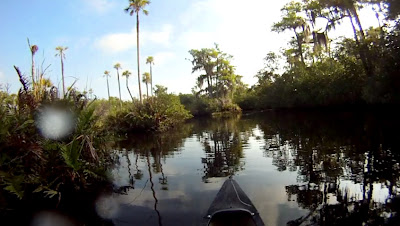 While map planning in the morning, we realized that this section was probably going to be the most challenging section to navigate.  You could barely make out the faintly visible trails in the area, blurred by the jpeg compression that Google Earth applies to their images.  CP16 was found early on by heading down a trail somewhat near Trapper TA.  We took a bearing to CP15 at a distinct trail curve. 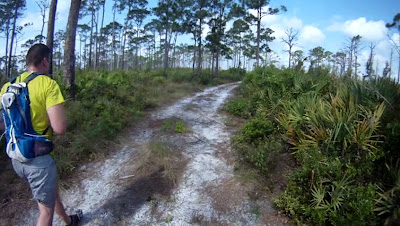 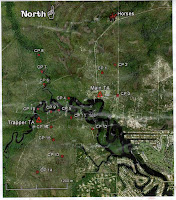 We wanted to head back to the North-to-South trail to the west of us to get to CP13, but could no longer find the trail, so we decided to head south and hit the next perpedicular trail that ran west to east.  We never found a distinct enough trail either.  At this point, there were three teams looking for this control, each with wildly different approaches. Team BikeWorks were the first to find it and we all gathered in. 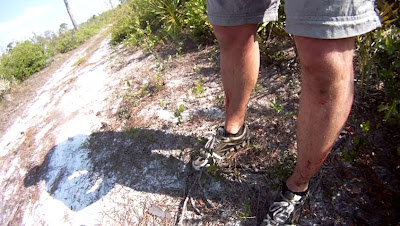 Knowing that trails weren't well maintained here, Nate and I kept it safe by taking a direct bearing to CP14 and to our delight, ran into a clearly distinguishable trail that was somewhat showing on the map.  We retook another bearing from a distinct bend in the trail and quickly found it first before disappearing out with no one in sight. After gathering CP12 and 11 to complete the counter-clockwise loop, we headed back to the main transition area (Main TA) in a blazing 22 minutes.


boats on water, boats on land 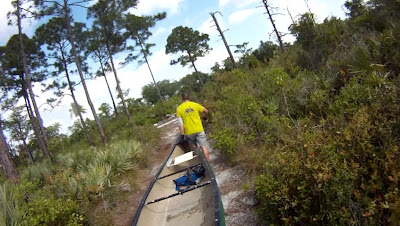 Up to this point, we had raced an exceedingly satisfactory race.  We transitioned out of the Main TA and headed to the Bike TA to start Camp Murphy single-track bike trails.  This reminded me of Turkey Burn 2011 and doing the Chuck Lennon trails, only these weren't nearly as technical.  They were so brutal--curvy trails with thick sugar sanded uphills.  We were told controls were placed obviously on the trail so that you could focus more on the riding. 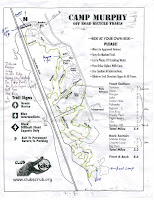 For the first quarter of the trails, we made good speed, passing a team or two.  But as I looked back, I could tell Nate wasn't in it.  His head was down and he seemed to be pushing a 90% effort level.  I slowed the pace and things continued getting worse and worse.  Half way in, after taking a couple falls each, we were basically walking our bikes from there on out.  Nate was going into full heat exhaustion--fatigue, muscle cramps, pale skin with red face, profuse sweating, rapid heartbeat, and later, bouts of dizziness and confusion.  He took all the salt pills, Gatorade, and gels he had to try to combat it, but nothing worked.

I told Nate as soon as we can hit road, I was putting him on the tow to get back to the Bike TA, where he could cool down with the water jugs there, and perhaps end the race.  Once you hit the wall, it's extremely tough to come back.  Trails become the longest trails ever, and hilltops become the most scorching open areas.  I encouraged stops and rest, yet the stubborn Canyonero wished to push forward.  Nate tells me, with eyes rolling to the back his head, "we're not driving 6hrs from Orlando to Hobe Sound and back just so I can bail now, keep going!"  The season in Orlando had not hit 90 degrees for the year, so we had not held training sessions in substantial heat yet.  To further compound the situation, Nate is an Englishman, who hails from a country that sees 70 degrees possibly twice a year.  Today, Hobe Sound roasted him.


bridges that look like they have been built in the 1600s 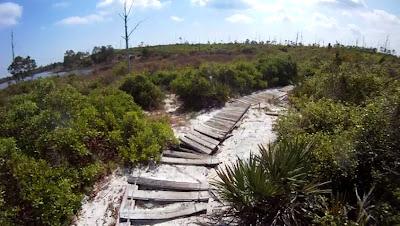 To my surprised, Nate was still breathing, somewhat upright, even after traveling through the most desolate-looking terrain, filled with bike sinking sugar sand.  The sun baked him from the top and the white sand broiled him with its radiant energy from the bottom.  I kept a close eye on him.  We transitioned onto foot where I aimed to grab CP27 first.  We counted paces to the trail that CP27 was supposed to be located, but had to go much further before we saw a trail.  About 100m before the CP, I told Nate I would run to the CP while he walked over.  It was the tactic we used to cool Nate down.  However, again, I had to go quite far before finding a CP near a bridge. 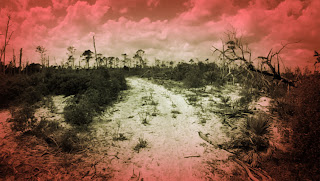 After punching it, I realized we were at CP30!  What??  It did not make sense whatsoever to me.  I reviewed the map and traced our routes back from the Bike TA...yep, everything still looks correct.  As Nate stumbled over to catch up, even in his delirious state, he asked if my map was rotated.  Damn, yes it was.  That "North" indication got me, and I was not the one in heat exhaustion. 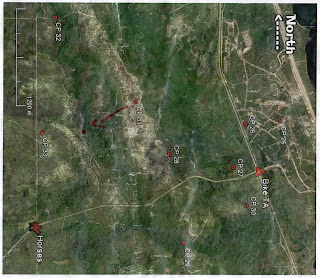 On our way to CP29, we met Team BikeWorks, who graciously gave us a tip to CP29, while we returned the favor to CP30 (go to the second bridge, not the first that you will encounter, which we saw several teams do).

At CP29, I shot a direct bearing from the trail intersection.  I shouted my bearing to Nate, who asked me to read the clue.  I measured a bearing of 40* and the clue was "NW of trail intersection" and started trucking through palmettos to reach it.  I looked back and Nate was scratching his steaming head...."40 degrees is not NW, is your mapped rotated?"  Damn, yes again.  I bolted in, searched and found it.  I can always appreciate a great backup.

At this point, he was not looking good at all.  Bouts of dizziness overcame him, and he reported his actual stomach organ was cramping and making a fist.  I was really concerned so we called it and headed back.  I have never witnessed a mere mortal suffering for this long without throwing in the towel much sooner.  I had to give it to him.  He raced through 3½ hours of heat exhaustion (although I do not encourage anyone sucking this up whatsoever!). 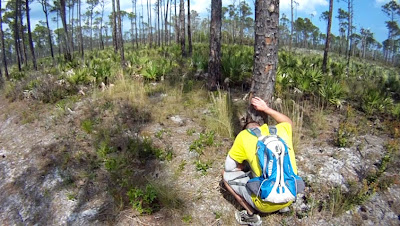 On the way back, I calculated 3 minutes for me to dart in and out of a trail to get CP27--my time estimate was bang on.

We had about 20 minutes left so we skipped the remaining bike CPs and booked it back with Nate on the tow.  We had no doubt that we could clear the course with our initial progression of the race had it not been for unfortunate circumstances.  But even on our worst physically-performing day, Canyoneros still mustered a respectable 5th place.

By the way, the faster Sport teams should switch to Elite :)