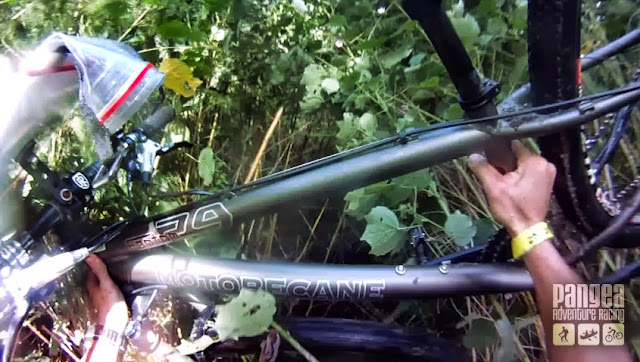 Driving home, we usually give out our own awards to best adventures we experienced during the race.  To this date, no bushwhack has ever stopped us from blazing a trail of our own.  Today's direct bike bushwhack from WP2 to CP23 is now the new reigning champ of our "Worst Bushwhack Ever" award.  That 500m length of hell dethroned a previous 100m bushwhack we crossed stomach-high rotten swamp while getting cut up by vines of thorn.  Today, we have cuts and scrapes running up both of our entire arms, neck and face that give us the appearance of battle warriors!  To top the look off, my arms swelled up like Danny Trejo's lumpy face, as my allergic reactions tried to deal with it.

To start, we immediately shot a bearing of 300 degrees, as pre-measured in the morning.  While traveling through the vegetation presented, I must have run over 50 saucer-like spider web contraptions.  Once we hit the wall of trees, many teams converged and hunted for this CP6.  It ended up being much more north than we had measured because the Main TA plot may not have been in the most precise area.  We ended up finding that with the help of other teams nearby.

CP7 was pretty easy--identify the trail intersection before cutting into the wooded pine tree forest about 40m north of it. 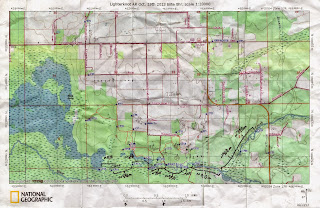 CP8 gave us some trouble.  We didn't count paces and there were multiple trails and outlets there so we poked into a couple of areas before running into a 3-way trail intersection that I could relate to on the map.  Again, 8 was found with some help of other teams. 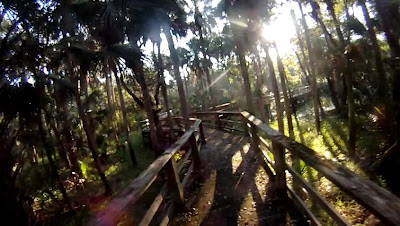 Going down to the Boat TA, I mistakenly took a trail heading south, but quickly corrected.  I should have taken note of its existence since it would come back to haunt me later.

In the middle of the first foot section, we ran by the Boat TA.  Nate was chosen to paddle about 30m out to a set of bells across the river and ring it.  It was his first time to paddle a canoe by himself--with a canoe paddle, not a double-sided kayak paddle.  I'm pretty sure the grin on his face was just him showing off doing a couple spin tricks on the way out and back, haha.

We took advantage of the paved roads and pedaled fast and hard.  Despite doing so, team BikeWorks and RinkSide Sports were having their own competition ahead of us.  We were amazed by their speed to say the least.  No trouble here, but I'll give due respect to the teams ahead of us for finding the CPs for us!


this is where they grow cabbage patches

This is the segment where I started feeling twitches in my quads...no good!

We were given wristbands at pre-race so every team member had to punch various controls.  Nate saved me several times by reminding me I had to punch my wristband, because I totally forgot about those extra instructions.

I never thought I'd ever write such a thing, but we cleared the entire boat boat section with absolutely no issues.  Every length was measured out and backed by a stopwatch, and every turn was tracked.  I don't know what else to say!  We had the 2nd fastest time here, only beaten by Dash's team by two minutes, who we deemed were not humans :) (they won first overall by about an hour) 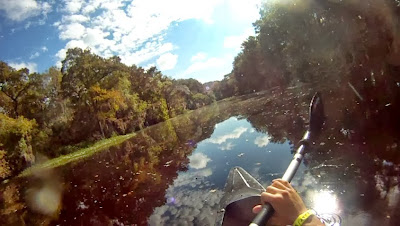 To split from the two teams ahead of us, we decided to head east on this river first.  We don't like racing with teams around us.  It doesn't allow us to learn for ourselves, and the race pressure frequently forces us to focus on the competition rather than the navigation.  A mistake by the leading team will punish following teams, but you can also say their success could also be yours. 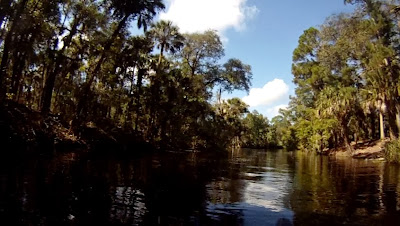 This is the segment where Nate started feeling the beginning effects of overheating...no good!  He was proactive about cooling off with a wet towel on his head.  Who would give out first?  My leg cramps or his overheating??

These little comical games were pretty fun!  At the Main TA, Nate again was chosen to carry a sandbag around a sand-sinking donkey track.

Seeing how close these controls were, I told Nate that I bet there would be no difference between this leg and the next trek.  I was absolutely correct--lots of swamp trekking and bushwhacking.

CP20, 21, 22 were easy and found with pinpoint precision.  It was CP23 that killed us (intro paragraph).  A 500m bushwhack with bikes took us a whopping 27 minutes to do!  Ouch.  Bushwhacking on a foot section is one thing, but when you have to drag a bike that is like a large billboard through some tightly grown bundles of tall, leathery, stemmed-plants that always want to wrap themselves around you, your 1mph bushwhacking speed cuts to about a ½mph!  It can even force you to go -½mph as you backtrack to find better ways forward!  The environment wasn't the worst, but the length and the body-beating amount of energy we spent traversing these 500 meters is why we voted it to win the "Worst Bushwhack Ever" award.  Imagine running for 4hrs and you have to squeeze in a 30min toughman contest before finishing 3 more hours of running.  And to top it off, these plants kicked up plumes of feathery pollen in the air for us to breath in the midst our exercise.  And oh...Nate stepped in a massive ant pile and received close to 50 bites! 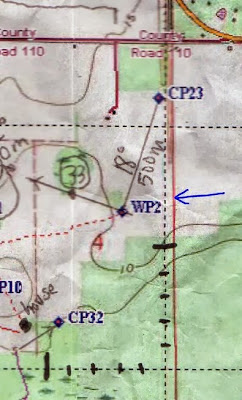 So what went wrong?  On the map, there is this red line that appears to be a road to the west of where we started (blue arrow above).  However, when we followed this road down on the map, it crossed the river.  That can't be a road??  It must be a guideline or an illustration of a border, right?  No, there really was a road there :(  Had we known, we could have cut out 20 of those minutes :(

CP25 also gave us a little bit of trouble as well as the multiple teams around us.  We biked all the way to the gate without seeing any signs of a control.  As other teams saw us backtrack, they did the same.  We however, stopped about 100m back from the gate and cut into what appeared to be a faint connecting trail and silently found it :)

Again, that red mapped line did not have us considering the trail that headed straight down to CP27.  Instead, we took the long route near CP7 down.  We lost track of where we were on the trail around the marsh, so I had to take us back out to a known intersection to precisely count paces back to CP27.  It worked on second try, but at the cost of 30min just on this control.  This was our second major error that proved fatal. 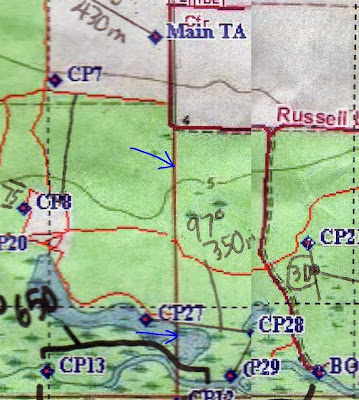 
what's the fun of adventure racing if you don't go through swamps? 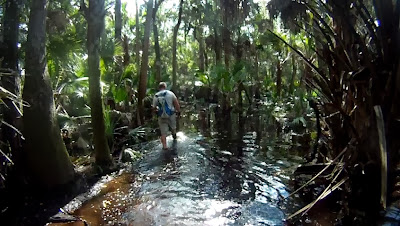 There was a another series of bearing controls there at CP21.  So many times Nate would spot the control when I would start to run out of faith in my distances and bearings.

To get to CP32, we found the house nearby, bushwhacked about 20m north and ran along a hidden path.  It was then that we calculated how much time we needed to get back.  In my severely cramped state, we could not afford to find our last CP33, so we just trotted back to the Main TA.  Looks like my cramps beat Nate's overheating in the end, heh. 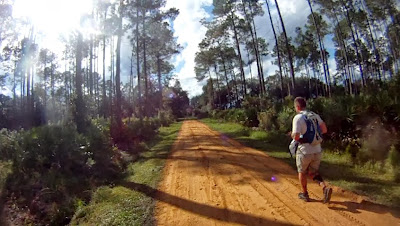 Rest in peace you Pangea shirt...I have no patience to pick these off 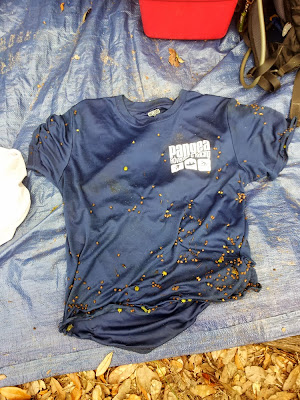