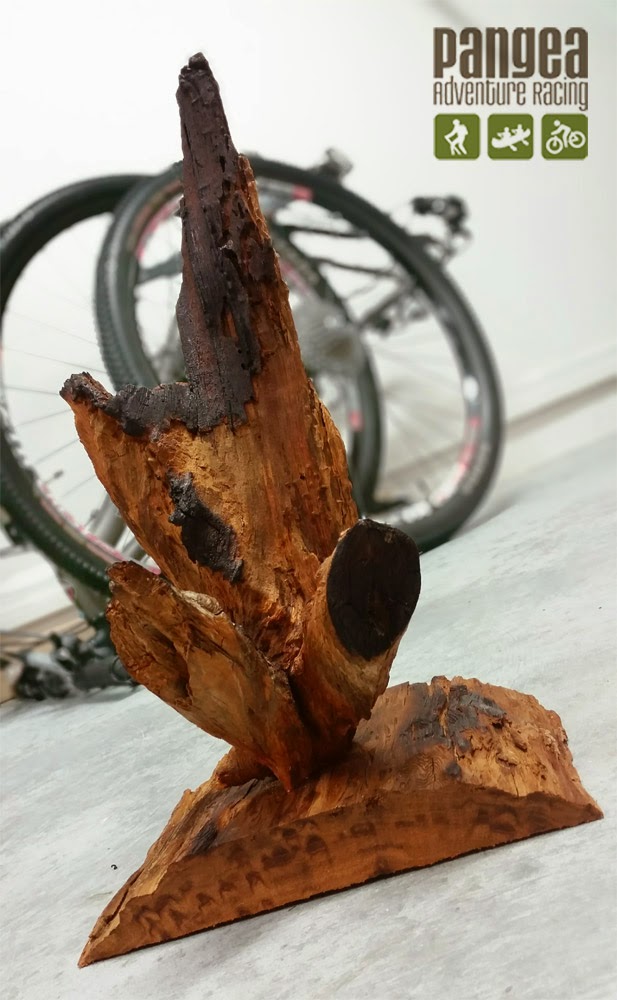 Three years ago, we participated in our very first Pangea race, the Lighterknot AR of 2011.  We set out with three teams and finished bottom three.  However, there was something about adventure racing that kept us coming back.  No race was ever the same.  Nate and I can name any race we've done in the past and instantly recall the great stories of the experiences.  And that's what makes adventure racing so great for us.  Ironically, the best stories we have aren't the ones where we placed higher on the leader boards, but the ones where we were completely lost in the woods, fearing for our lives, wondering what comes next, while the sun was setting and our water running out.  That's what keeps the blood flowing, and that's what creates the lifetime stories.

Fast forward three years later, and team Canyoneros has finally achieved our very own "first place overall" (technically second time, but the first time was with the unstoppable Dave Ashley at the helm). 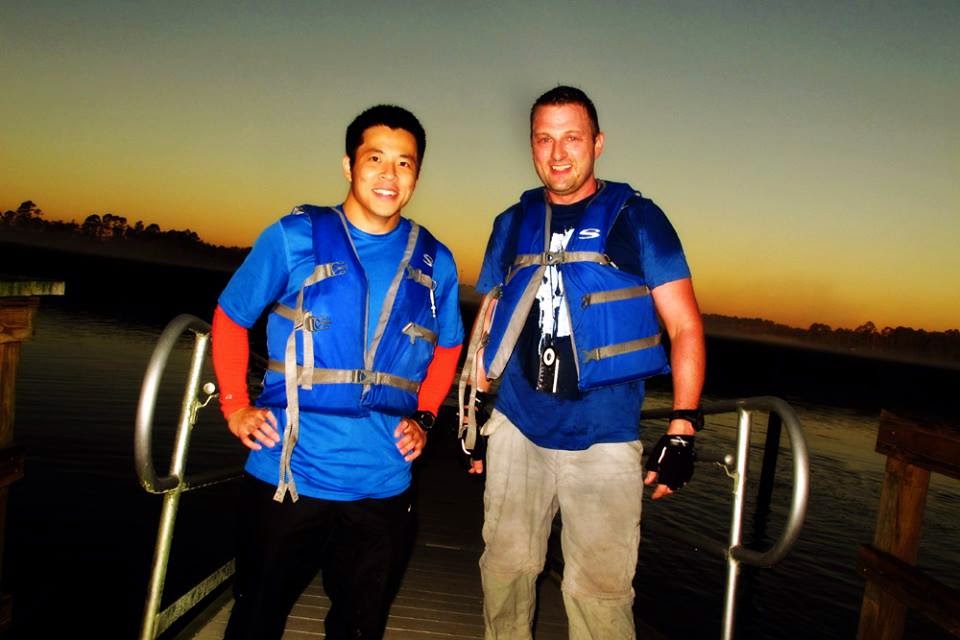 Dawn had barely cracked its amber hue on the horizon before we were off on a 32 minute foot prologue to find three controls.  The cooler morning chill was a great welcome that supercharged our running as we collected CP 1, 3, and then 2.  We had a bit of issues at control 3, spending almost 10 minutes finding it.  I always have the toughest time calibrating my navigation on prologues, where we tend to put more efforts on speed than accuracy. 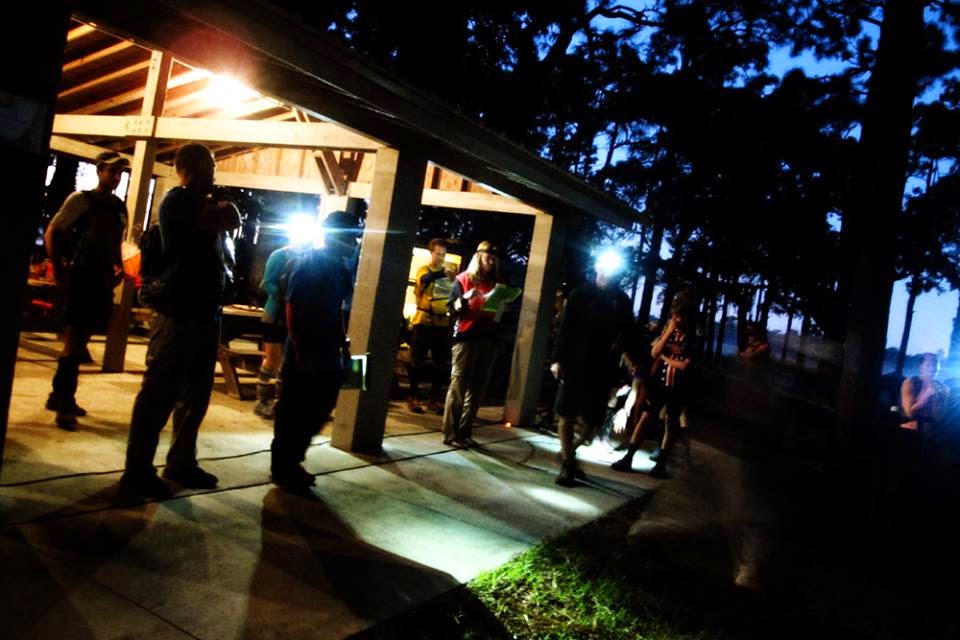 After the run, we biked a few minutes over to the canoe launch, took team photos, and paddled off east towards the St. Johns River to collect CP4 before the open water picked up more chop. 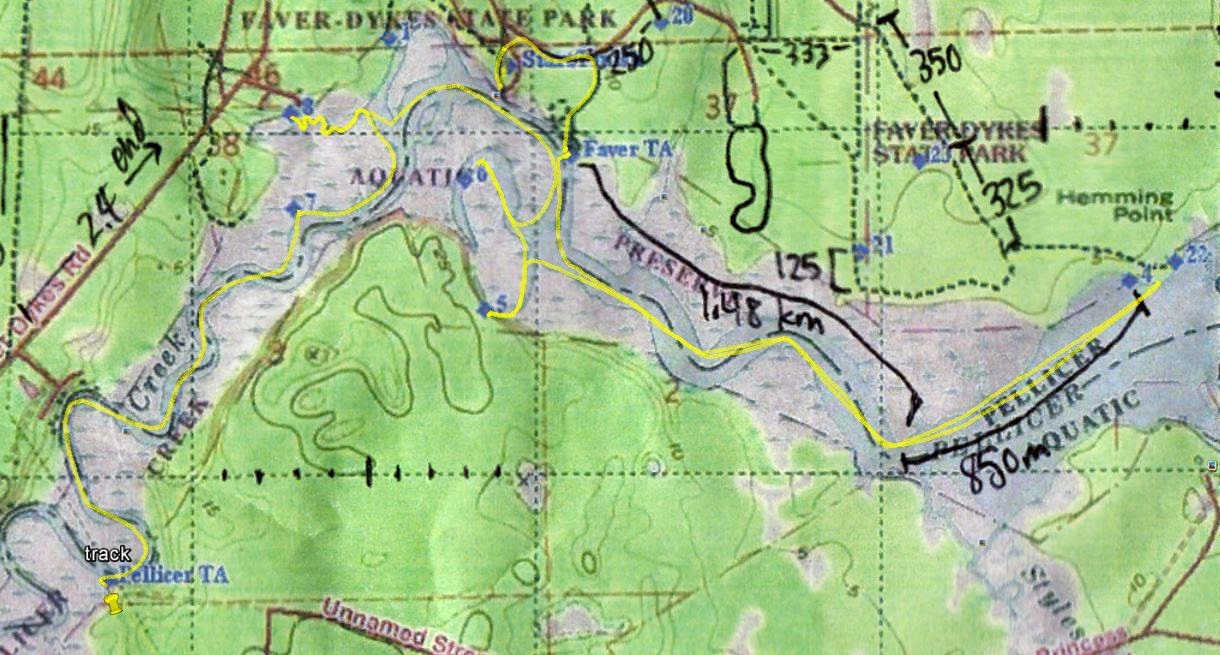 The river was a perfect setup of easy-to-identify bends that made navigation ideal.  As it turned out, we were primarily at the end of a pack of canoes following the leader.  The advantage was that we didn't have to search for the CPs, which gave us the fastest time in this leg.  Once done finding them all, we ended up in another location further up Pellicer Creek to start an orienteering foot section, with another map to be provided there. 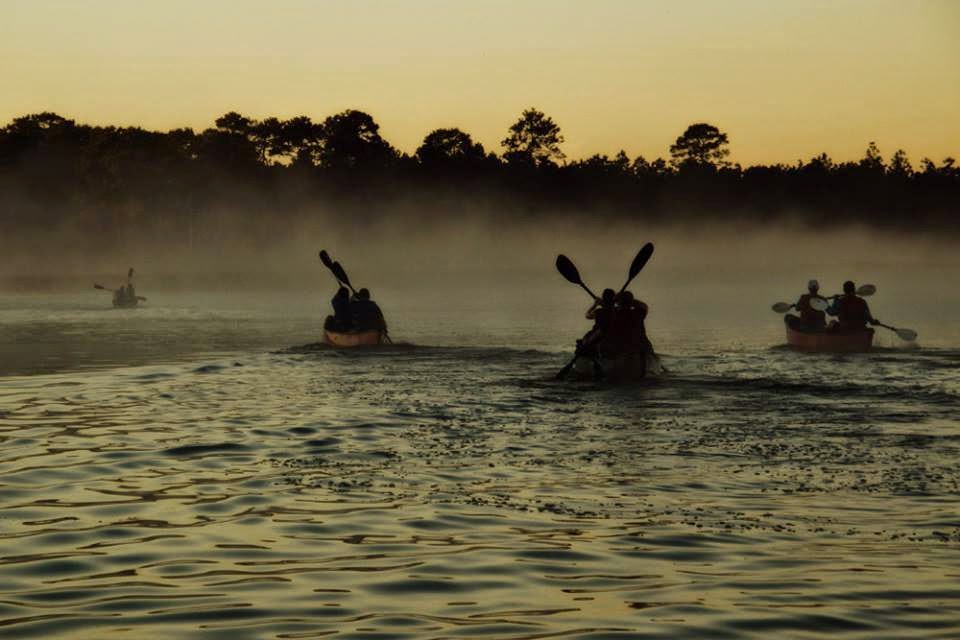 There were three controls to pick up, and we took Craig's suggestion of getting CP11 first.  It took Nate and I a bit to warm up our legs after paddling an hour and a half.  Our legs got stiff sitting there in the canoe, motionless, and the weather cooler than usual.  Try running without bending your knees.  That's what it was like.  It was great that the canoe section was split up with another discipline in the middle. 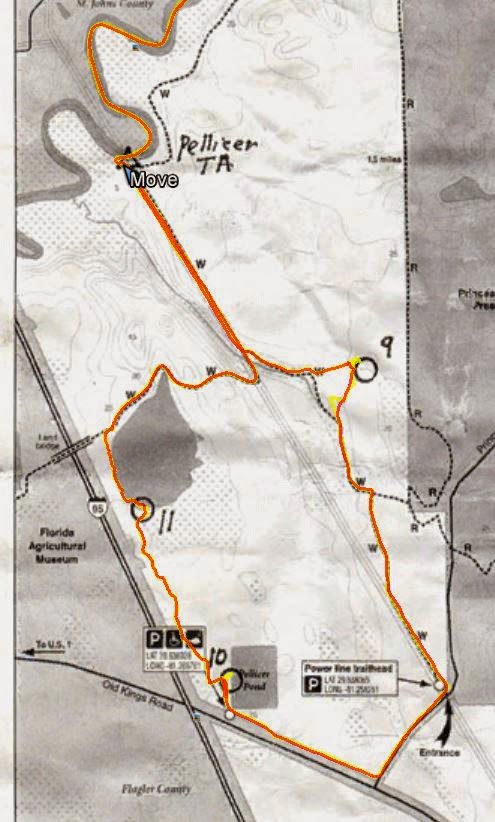 My plan for finding CP11 was to run to the landbridge, measure a distance and bearing for backup, and travel alongside the lake.  This map scale was in miles, so Nate helped me out by converting all of my on-the-fly and eyeballed measurements to metric since we are much more in tune with pace counting in meters.  We met team Mojitos on Monday there, where they had found it.

Getting to CP10, we just wanted to get a rough bearing towards the large man-made, squared pond to the south.  The bearing didn't have to be precise since you had a huge room for error, and if you overshot, the control was close to the road anyways.  Once we got there, we ran up and down its west border and found it.  CP9 didn't give us any trouble, as we used our steady jogging to complete it efficiently with the fastest time. 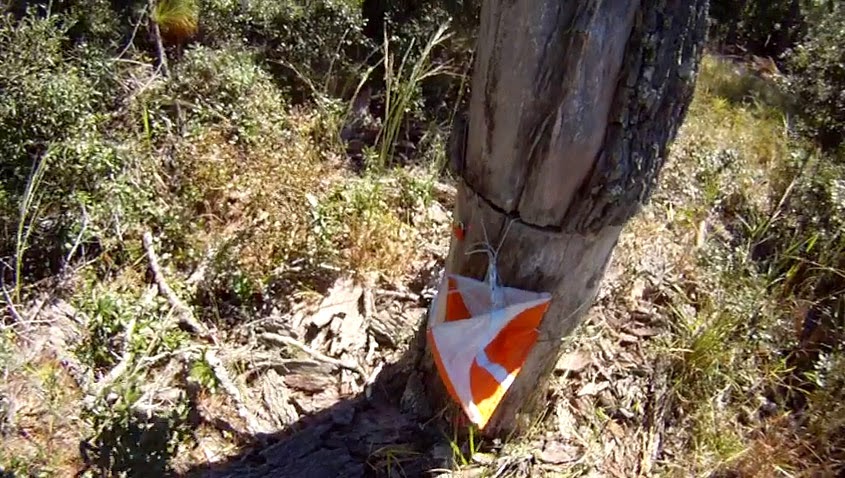 As we headed back to Pellicer TA, we were happy to hear we had taken the lead.  This has happened in the past for brief moments, but they were just that...brief.  Nate had the eye on the prize, the wooden trophy, and did all he could to back me up on navigation from there on out.  The excitement produced some high heart rate jitters on our paddle back. 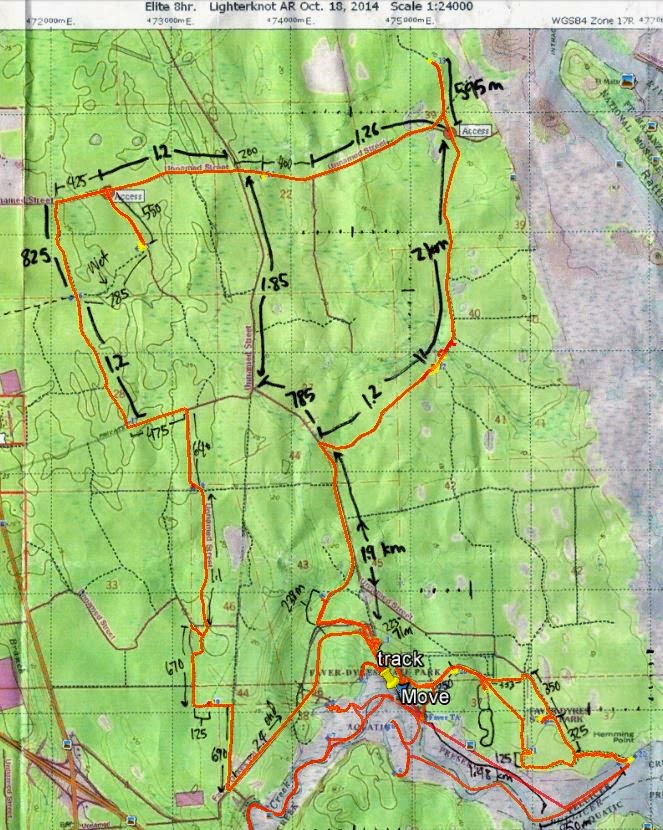 On map, the biking portion looked straightforward with a counter-clockwise loop.  Some controls were deceivingly close for a biking segment, and Craig confirmed our suspicion in the morning by going around and telling us all that there were a number of flooded areas.  We took all of his suggestions, starting with taking the detour at CP2 to head north. 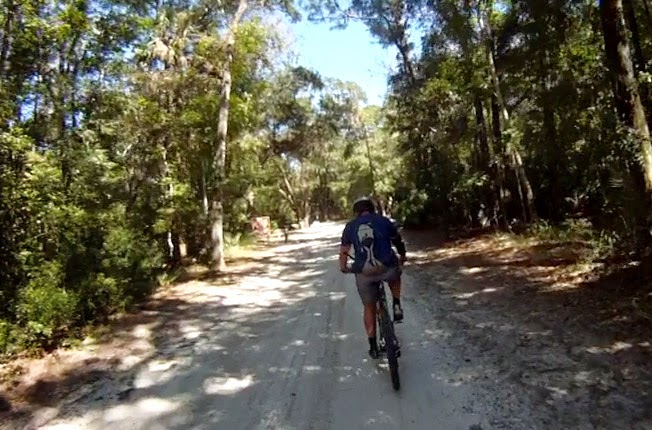 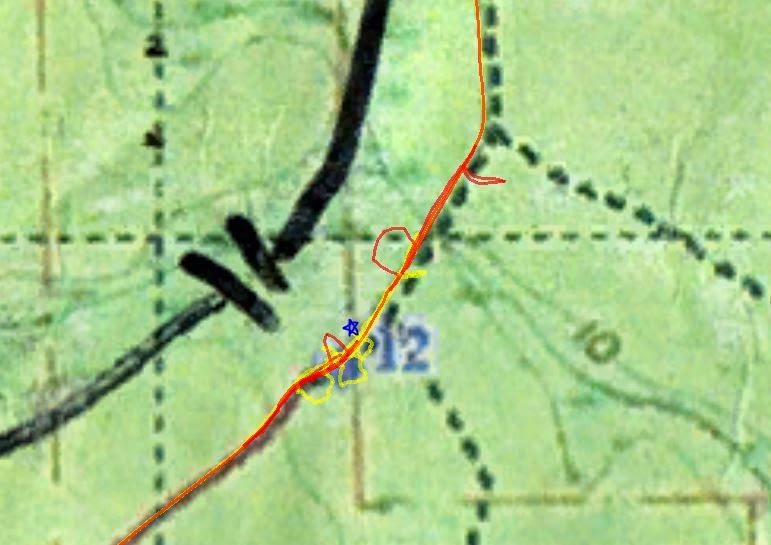 Once we punched it, others converged in and continued north to CP13 with us.  Nate was beginning to experience first symptoms of heat exhaustion.  With only 4½ hrs in, we needed to slow the pace down to prevent it from going full-blown.  The other teams slowly passed us and visions of first place once again slipped away from us like it always did in the past.  If they were faster as a team, there was not much we could do with so much race left.  But somehow they blew right by CP13.  My pedometer reading stopped me in our tracks, and I had to double check my measurements to be sure I wasn't wrong.  A couple sniffs while I was doubting/fumbling with the map, and Nate's nose had honed in on it again, at the exact location I stopped.  By then, the other teams were far gone down the trail. 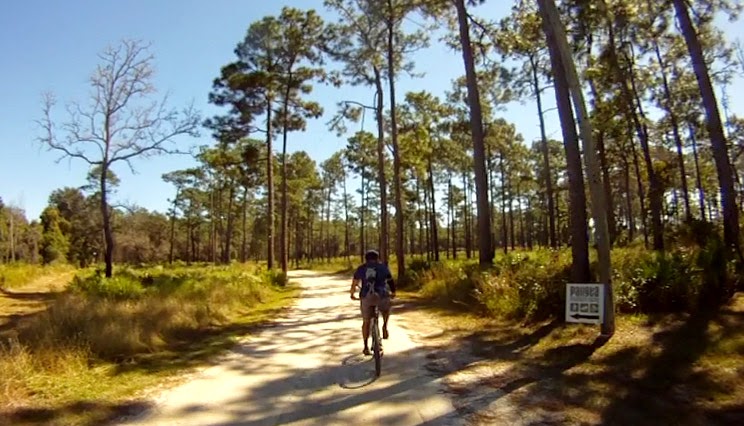 Nate's condition was getting worst.  I had him set whatever medium pace he could manage.  I can easily tell when he gets into heat exhaustion when his cheekbones are red and he's sweating profusely.  He'll be the last to admit it, that stubborn Englishman :D.   "Forward!  I want that wooden trophy!" he would proclaim as I regularly encouraged stops.  We couldn't find time do any long endurance biking before this race--nothing longer than 45min.  So for the flooded trails, we simply walked most of it.  On the flipside, my thinking is much clearer when my heart rate is down and oxygen can get to my brain better, so we were surgical on finding the rest of the controls on this leg, netting us the 2nd fastest time behind team Area Goats. 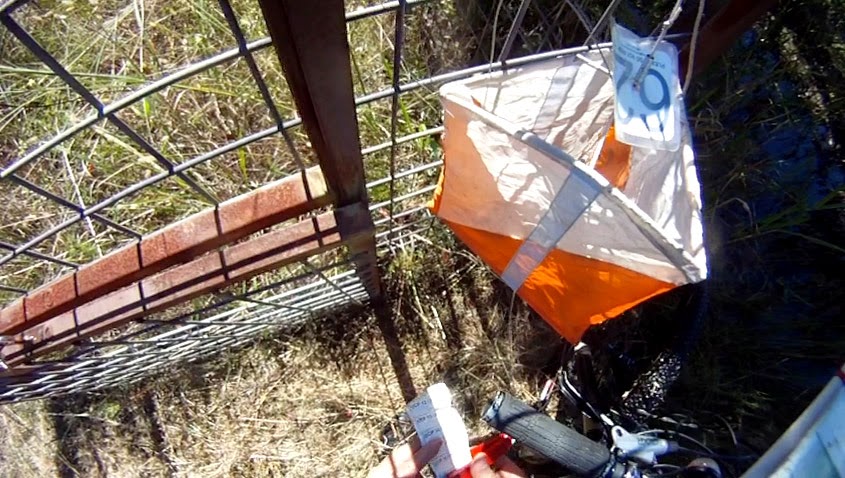 We made multiple stops along the flooded trails for Nate to defibrillate himself with cooler muddy water on the body :D 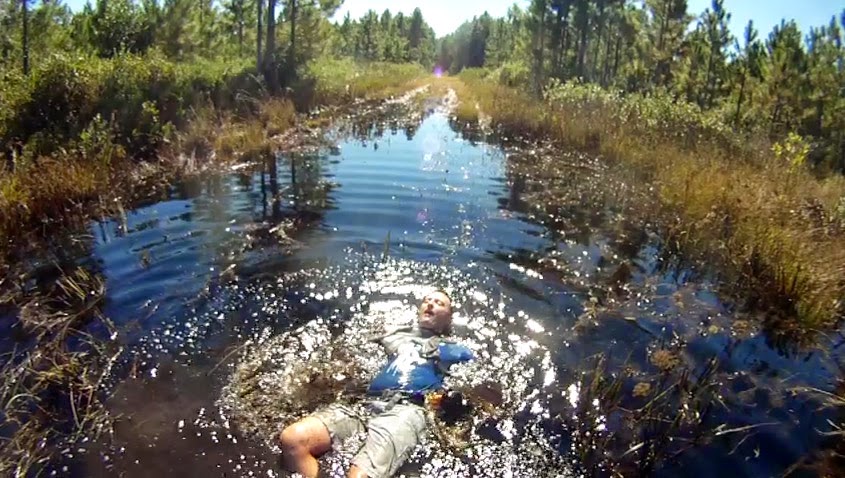 It was a treat to finish the last bit of the biking segment on paved roads.  As we pulled up to the main TA and got off our bikes abruptly, both of us immediately locked up in severe leg cramps.  I was meters away from the staff, trying to hop over, but just could not move my Frankenstein'd legs that had gremlins clawing to get out.  Nate's finally subsided and he was able to take the punch from me to turn it in while I sat down and stretched.  Nate ran back to our camp, poured cold water on his steamy head, and grabbed me to head back out, still with biking shoes.  Those were the worst leg cramps I have ever had to date. 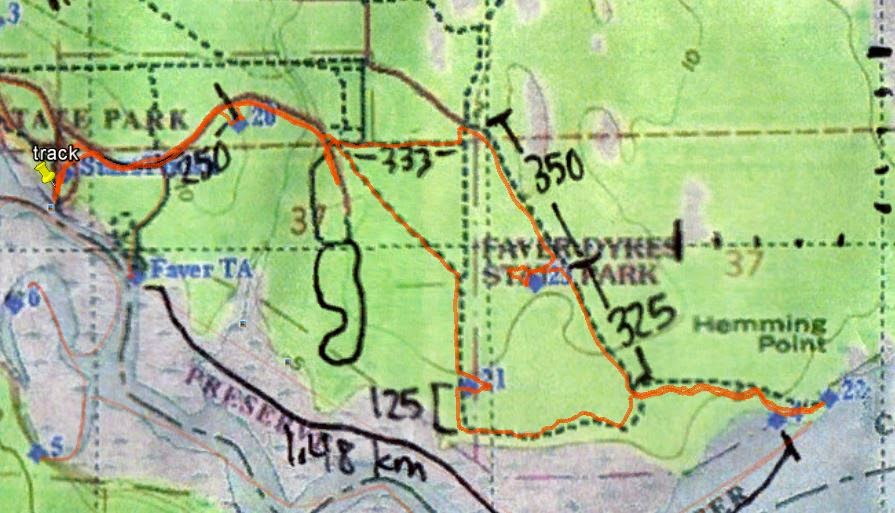 We hobbled out of the main TA at a speed slow enough to manage our cramps.  With the exception of trying to figure out where the trail head near the campground was, we found all four controls here with no issues.  CP23 appeared the hardest, but our pace counting amazingly got us there almost exactly.  Eventually, we settled on a pattern of 2-5min trot, 30 second walk to finish the race, since the cramps and stitches kept flaring up.  Believe it or not, we had a lot of heat training leading up to this race and it still got the better of us, despite a cooler than average day. 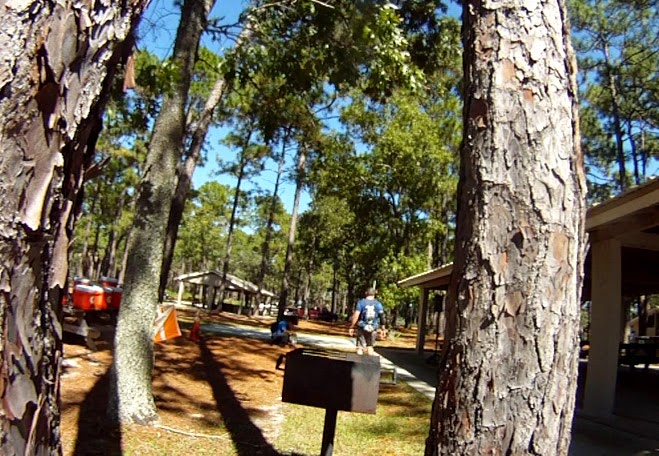 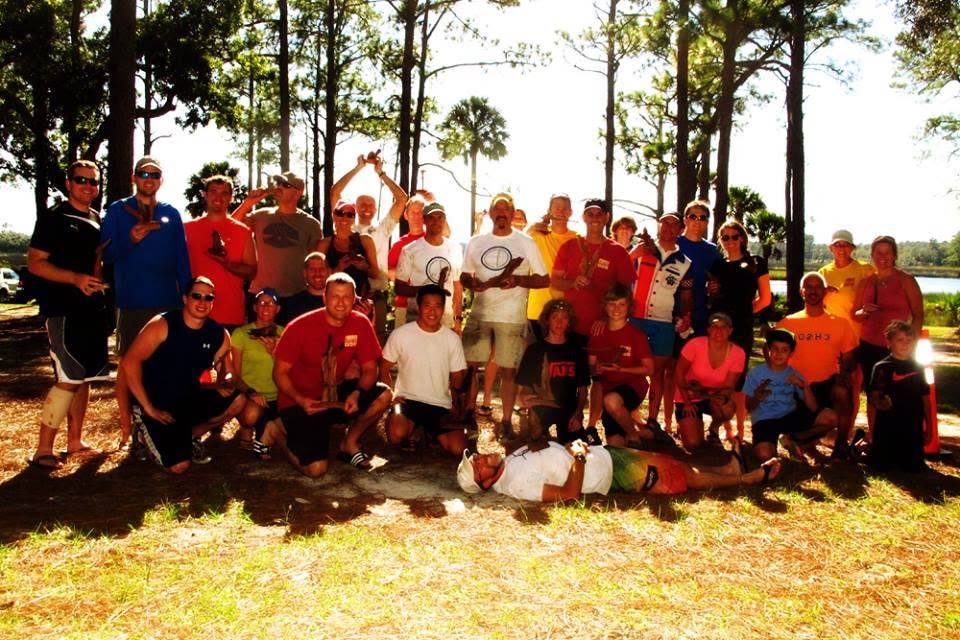 The tree stump trophy in the first photo above is wood called "lighter knot", hence the race's name.  It is also called "fatwood", which apparently lights up in flames pretty easily and is used in the production of dynamite. 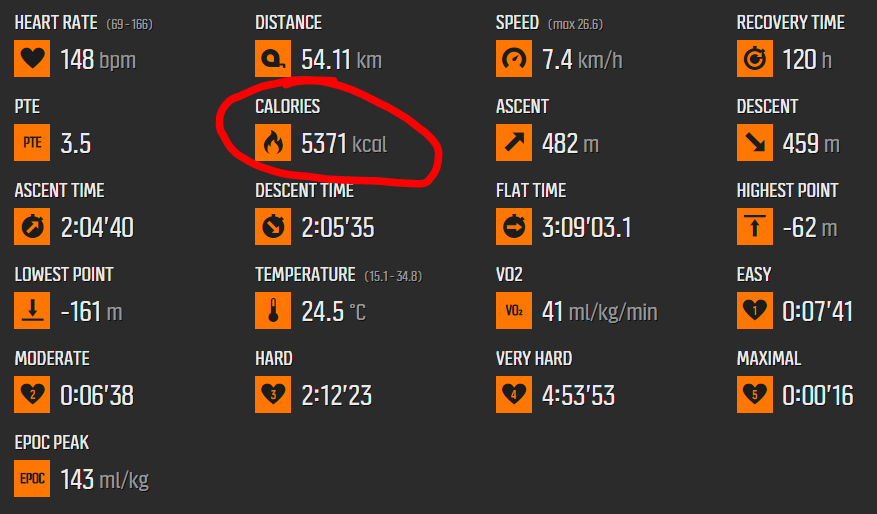