The goal...the Atomic AR.  The agenda...complete two FLO trekking courses with only a map and a compass.  FLO has provided a great learning experience for us to use on our Pangea events.

Today we set out with honorary Canyonero, Bill Dean (team We Blame Javan), who will join forces with us for the Atomic AR in May.  This was his first time out on an FLO course.  He was solid, both physically and navigationally.  As a team, we welcomed the hardest Red course to start with.  We worked pretty well, bouncing navigational data off each other and questioning decisions in an effort to keep accurate.  Only one CP had us scratching our heads for a bit, CP8, which was a solid 200m in the middle of a forest.  On map, colored shapes are drawn out to indicate thick forestry and clear running land, but in real life, those lines are blurred, making it a challenge to know where you are.  We eventually found it.

Oh yea...from CP6 to CP7, we tested whether going along the shoreline of the river was faster or heading back on trail.  Bill and Nate ran the trail to the north with no problems.  I volunteered to run along the river, which was much slower.  Along some areas, there was no beach but a cliff, so I plunged into the river.  I showed up about 7minutes after they did.  Note taken--follow the trails if they're pretty close, rather than bushwhack :)

Second on the agenda was to race the 'easier' Green course as individuals, each staggered by 5 minutes.  Nate has been improving on his navigational skills as my backup, and this would be his first time out alone.  Not only that, he beat the teacher, me!  Bill, who kindly admitted Little Big Econ was literally his backyard, beat us all. 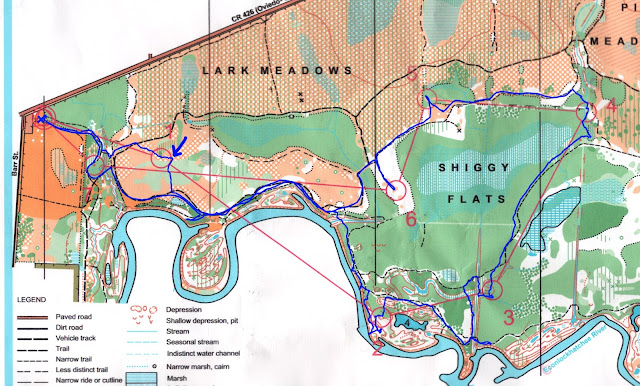 Nate reported he had an "oh shit, I'm lost" moment heading to CP2.  As seen in the GPS route, he poked into just about every intersection leading down into it, as well as rounded the river :)  Good stuff!


Nate will eventually find it! 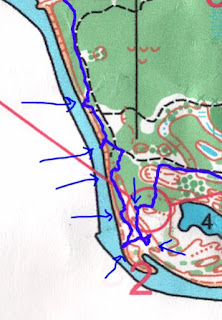 Onto CP3, he again had some mishaps.  The first, missing the ditch that led up to the CP and having to backtrack to get on it.  And then the second, going off the the correct trail of the ditch, bushwhacking across a stream, going back on trail and re-attacking to find the 4-way ditch intersection.  But he found it!  A true sign of stubborn Canyonero determination :) 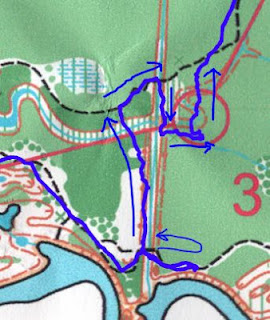 Embarrassingly, I could not find CP1 right off the bat, for the life of me.  I initially attacked in from the intersection at the very beginning, and then attacked in at the bend in the trail up north of the CP, and then attacked up from the trail bend at the south.  I attacked and re-attacked at least 5 times, while spending 20min on this CP alone, before calling it quits with no punch :(  Upon review of Nate's course, the punch was much further east than mapped.  The rest were pretty straight forward for me.  Some of them were repeats of the Red course.


CP1 mapped out of the circle 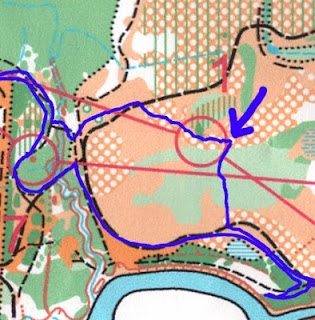 All in all, this is shaping up just as I imagined it, leading up into the Atomic AR.  This is looking very positive because there will be mountains to crush in Georgia, navigationally, and physically.  We'll be putting our minds together to figure that one out and to do well.
Posted by Thoe99 at 3:13 PM