We sometimes come up with the most masochistic workouts without thinking too much into the reality of things.  Today, we said "let's do the Bubba Goat in reverse" to give us a different perspective into a course we had done back in January...except today was 40 degrees higher on average!

The first time we did it, it took us 3hrs 30minutes, including a prologue.  We knew our 3 liter Camelbaks wouldn't last that in this heat, but we decided to race whatever length we could manage, with an emphasis on efficiency in route choices.

There would be no controls placed, so how do we do this?  You need the original map and a GPS recorder.  The map contains clues we can use to identify control features, and the GPS route will allow you to review afterwards to see if you really hit the controls. 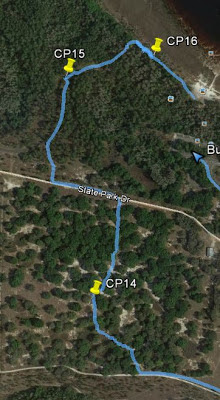 CP13
We trekked diagonally towards the road to cut down distance as we headed to 13.  On the road, we ran into two junctions before shooting a direct bearing to a highly visible embankment that housed 13. 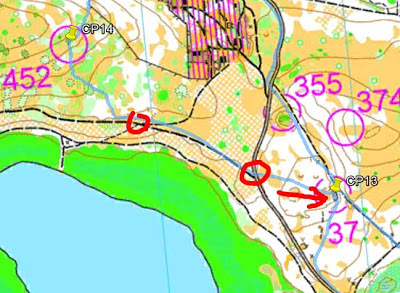 CP12
Again, we cut distance down by heading to the main road at a diagonal.  CP12 was a matter of running a little bit past the trail intersection (A) and locating a marsh.  The control was at the "northern edge of the marsh." 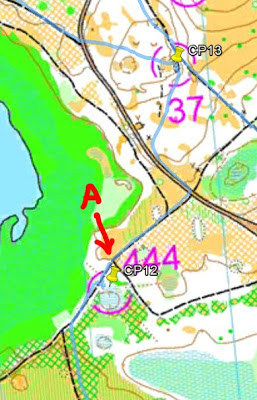 CP11
We took what we thought would be the shortest trail to CP11.  At the intersection (A), we shot the bearing straight south and tagged whatever distinct trees we saw between the trails around us (in red). 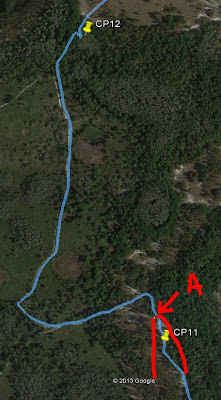 CP10
At the intersection near CP10, we saw a line of palmettos (illustrated on map in green) that led to a mapped dry ditch.  We assumed the northwest end of that dry ditch contained the punch. 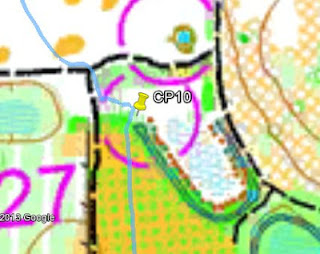 CP9
We took some diagonal lines to cut down distance to CP9.  At the trail opening (A), we shot a direct bearing identify the forest that contained CP9.  The forest had an opening with one row of orange trees that we followed to the end to hit the punch. 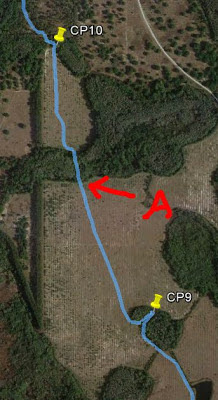 CP8
We followed a line of trees to exit, and then a ditch line that led to a small lake.  From there, we rounded the lake, followed a road mindlessly, only to realize we needed to shoot another bearing to CP8.  Going down to it, we checked off a 'ditch lake' to our left.  After punching, we diagonally exited to ensure cutting down on the distance, and therefore emphasizing efficiency. 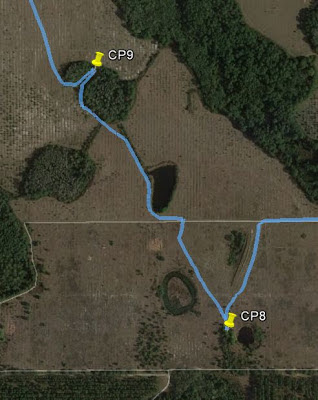 CP7
It was a long jog to CP7, but the conversations we had took our mind off the grueling task.  To hit 7, we first identified the opening in the woods (A), and then shot a bearing to an easily identifiable, large depression.

CP6
Our rule of thumb for determining whether or not to jog the further trail or bushwhack the shorter distance is "3 to 1".  If the faster, smooth-running trail is less than 3 times the distance of the bushwhack, then we'll choose to jog it.  We broke that rule exiting CP7 just to see what the area here was like.  It was slow going alright.

CP6 took some precise measuring and awareness of land features.  As we headed up from the 4-way intersection, the CP was twice the distance of when the vegetation border ended to the right.  The topographic lines also indicated we would be going uphill, and not yet hitting the peak of elevation before cutting into the woods to find this man-made object (a water pump).  After cutting in about 25m, it was easily visible from the distance. 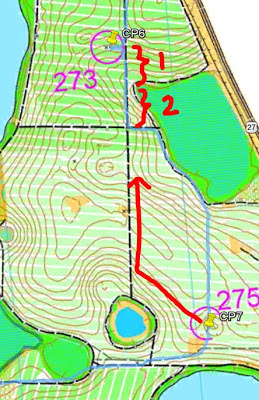 CP5
We followed the fence on the right side, hopped the fence after the trail ended, and poked back in after the lake ended.  As we headed alongside the lake, we looked far into the distance and identified the cluster of trees and clearing at the northern border of the lake (CP5). 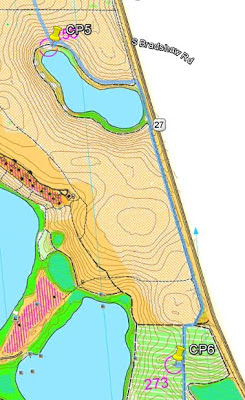 CP4
Look how straight our bearing was from CP5 to CP4.  The terrain was very slow going and the heat was killing us here.  I was really wanting to sharpshoot directly to the intersection near CP4 (A), and we were super close--only 35m away on a 1100m whack through that dense shrubbery.  As to the decision of whacking vs running the longer route....the whack didn't fulfill our requirements of 3 times the distance.  The whack was 1100m, the run was 2000m (B).  If we were fresh and the weather was much cooler, the run definitely would have been the better choice, as Quickroute reported our average jog at 3 times the speed of our whack along that line. 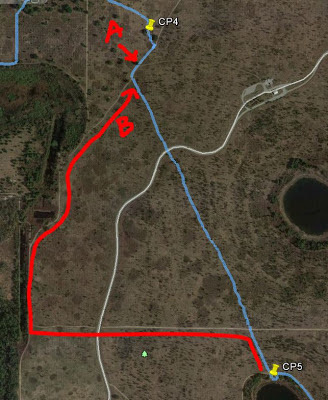 CP3
At CP4, we tagged an extra tree for good measures, but the 2nd tree threw us off course towards CP3.  It didn't matter, since we corrected at the trail, locating the highest point (A) and shooting another bearing for better accuracy.  The trees changed our route some, but we found the opening which housed it. 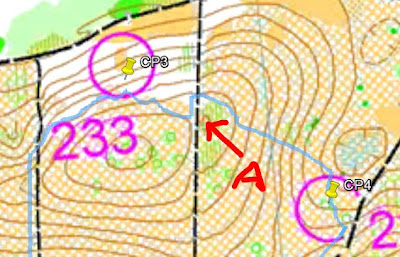 We were only 15m away from CP3, as measured in Google Earth, which in real life, we would have easily seen and punched it.  This area was pretty ambiguous when it came to "open clearings". 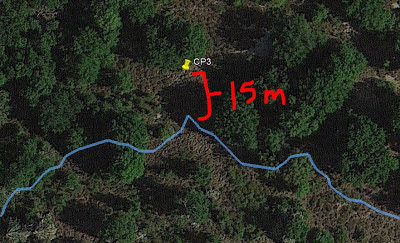 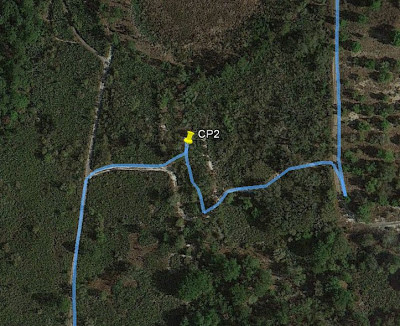 CP1
The map showed no clearly visible attack points, so I determined a 165m pace count from the trail bend (A) before poking into the marsh.  It was successful. 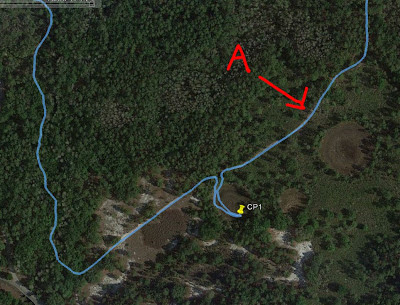 As we finished CP1, we both ran out of water and had to cut off the Bubba Goat's prologue (which would have taken 30-40min).  In our overheated state, we wisely cut that portion off and chose the absolute shortest route back (there were many trail choices).  While jogging/trekking back, we identified 3 out of 7 CPs from the prologue for good measures and finished in 3hrs 15min, a distance of 18.56km. 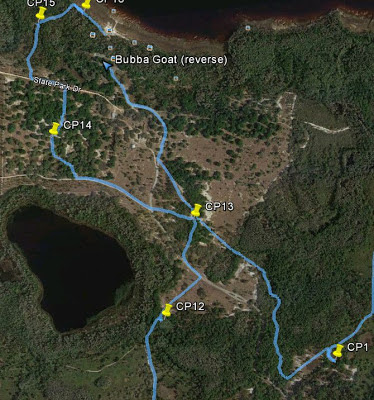