This place is pretty tricky when it comes to orienteering.  I've been stumped here before, and I was stumped here again, today.  I like to use the Florida Orienteering events to try new things, learn through repetition, and get a good workout.  Here's the breakdown:

CP1
The first CP always calibrates my head with map scale, time and distance.  I overran CP1 and had to backtrack in a loop to luckily find it. 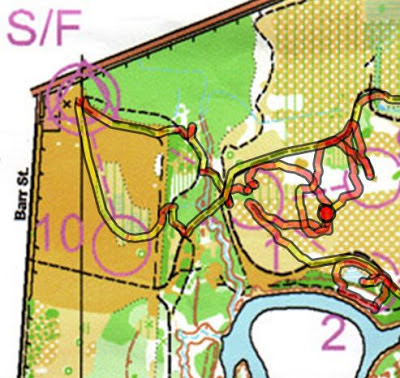 CP2
I slightly overran CP2, found the trail by the river, but not the mapped marsh.  So I had to pop back out on the trail and attack it again.  Found it quickly on second try (pic above).

CP3
I took the smaller trail going towards this control and as I saw the river to my right, I poked out and saw the CP a mere 40m across it.  Do I get dirty and plunge into the river?  Not this soon.  I went back and around the channel. 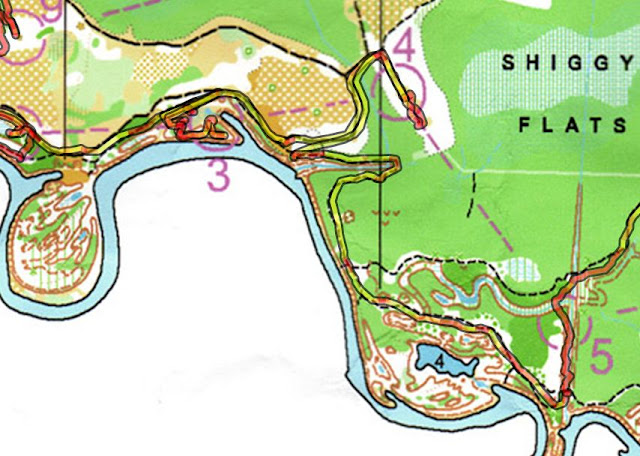 CP4
This one was easy to find, as I've been to this location before during another FLO event.

CP5
On way out, I debated bushwhacking a straight line towards CP5.  Upon heading south out of CP4 and observing the vegetation en-route to the next control, I deemed it way too thick and entangled with vines to consider.  So I ran the long route.  I wasn't thinking as I headed on the south trail near the river and overshot the first trail to the control.  No worries, I took the 2nd one and headed up to CP5 by following the creek. 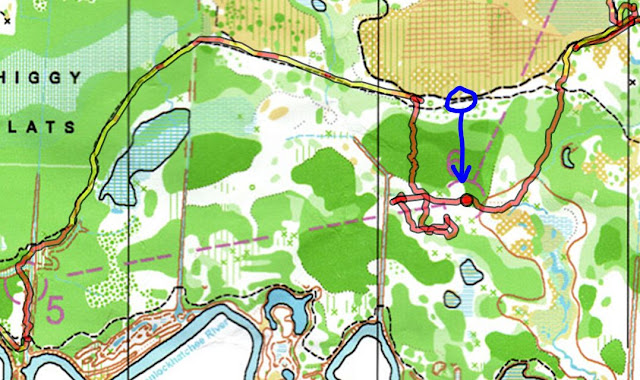 The attack point I wanted to use was where the two trails were at its closest (marked blue above) and shoot a bearing straight down.  Usually I can rely on my sharpshooting skills to hit a target.  However, I didn't find out I had the wrong attack point until I got home, but I can understand why I spent so much time running around in the forest once I counted paces to the proper distance.

My saving grace was that I found a creek to the west, which was mapped to branch out to the east.  I used that intersection, followed the creek and walked right up to CP6.

CP7
This was another tricky one.  The mapped trail going north was completely overgrown, with just a barely discernible creek that revealed it.  I overshot it the first time, realizing it after seeing my compass turn south, but then found the trail with the clue of a puddle of water on the trail at point A.  On the map, there was a small marsh that leaked onto the road there that I used to follow. 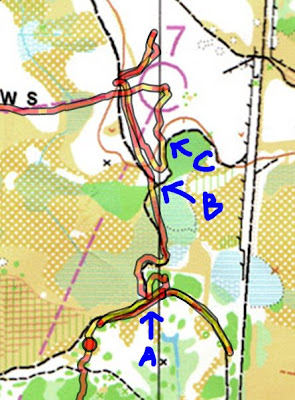 Once I got on the trail that was completely overtaken by weeds, some as tall as me, I headed north, trying to find point B so I could use point C as an attack point.  I never saw it, which led me further north.  After getting a feeling that I was running too far, I dashed into the woods to see if luck would find it.  Hehe...luck works sometimes, but it's best try to develop skills to avoid using it :)  I didn't find it.

So I ran back south to see if I just didn't see the trail at point B.  I used the tall trees (colored green on the map) to sense I was getting nearby.  Sure enough, it was a trail completely overgrown as well, but not as bad as the one prior.  Once I found the trail, it was a homerun to CP7.

CP8
My rule of thumb for bushwhacking is "3 to 1".  If the running trail is more than 3 times the distance of the bushwhack, choose the bushwhack.  Why?  It conserves energy.  I also assume that a good running pace is 6mph, and a bushwhack is 1/3 of that at 2mph.

My goal was to hit point A, so that all I had to do once I found the trail was go north.  The direct approach is to hit point B exactly, but if you do that, sometimes you have to guess if you accidently overshot it too far north or south, causing you to confirm by running both north and back south, sometimes.  If you deliberately miss it in one direction, you have better chances of knowing you just have to scout the other direction.

Come to find out, my bearing was as sharp as a sushi knife, as I hit point A with some crazy accuracy across almost a kilometer of distance.  Find CP8 was a matter of locating the trail intersection (point B) and following the creek til you found the control, which wasn't far from it at all.

CP9
I wasn't thinking here since I originally planned on using point A to attack straight down to CP9.  For some reason, I ran to point B, but used the same bearing I had in mind for point A. 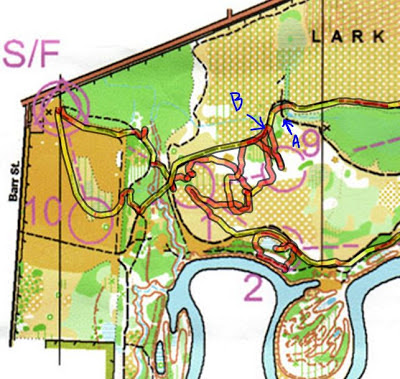 This mistake forced me to scramble in the area before running back out to the trail to attack it with the correct bearing.

CP10
I had to squint hard to see the trail crossing over into CP10.  Seems like I took the most direct approach.

All in all, this event has reinforces the fundamental ideas of orienteering to me.  Focus at all times and read everything on the map to confirm position.