Here's a park that's new to me.  This is always great, because it allows me no advantageous knowledge of the area and forces me to be vigilant on all fundamentals of orienteering--using the compass, counting paces, environmental awareness, and map reading.

I arrived early and saw about 150 JROTC students waiting in line to start.  Huge turnout!  Fortunately, upon registering, I was able to bypass that massive line. 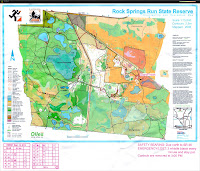 The blue course offers the most challenging controls, as well as the longest lengths.  I make an effort to challenge myself as much as I can during these FLO training events.  That means attacking the most difficult course first and route planning as I go.

CP1, 2
Upon GPS replay, I completely walked right by this one by a mere 3 meters the first time!  Once I overshot and hit the main road, I had to confirm my positioning by going to far east end of the trail to know that there was a mapped intersection there.  I ran back, re-attacked, only to bail again.  On the final attempt, I confirmed positioning by going to the far west end.  Then I conveniently picked up CP2 to use as an attack point for CP1.  This time, I used a straight bearing.  It just about led me right to the CP.  I realized why I walked right past it the first time.  The control was very low hanging, and plus, I didn't know my orienteering symbol for "root stock" to be on the lookout for one.

gnarly mess of a CP1 attempt 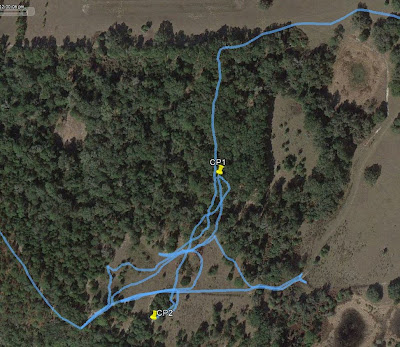 CP3
This one was straightforward, as I used a trail intersection to shoot a direct bearing.  The only frustration was having to walk through thorny brush.  This control was also low-hanging, meaning I had to be quite sharp on my searches from there on out. 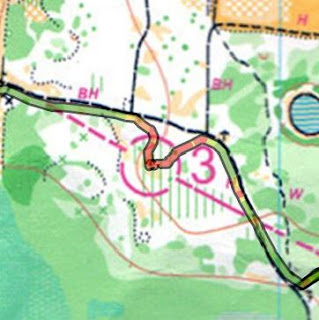 CP4
Again, I used a trail intersection to count 100m north before cutting into a sparse field of palmettos to easily find the control within a small depression. 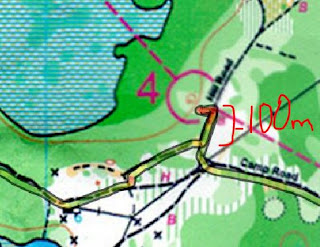 CP5
It was a rather long jog to this control.  I tried to pass the time by stimulating the mind with exercises, such as counting paces, identifying any map features in real life such as curves and changes in vegetation, and visualizing what I would see at CP5.  Once I got to the line of erosion, which was very faint in some areas, I followed it through thick brush.  The only thing that kept me connecting the dots with the broken up faint paths was trusting the compass of going west.  The depression was easy to identify as a sunken area of plants.

CP6
Easy...find the marsh and follow the southeastern side til you ran into the control. 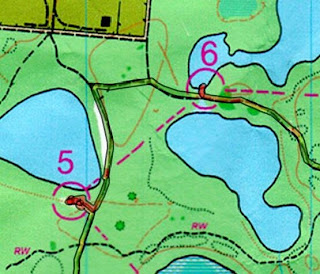 CP7
Heat was starting to catch up, so I used the rule of 3 to bushwhack across open land as a shortcut.  The "rule of 3" states that if the slower bushwhack is less than 3 times the distance of the direct jogging route, then choose the bushwhack.  It also conserves energy.

I could attack 7 by running into the trail intersection nearby (right side of image above) and identifying the "two distinct trees".  I even cut across into a closer trail, found the intersection, shot a bearing and easily identified which two trees contained the control.  There's a small area where it seems like I tried to find the control, but the trail almost seemed to end there and I ran off trail, which caused me to double back a bit to make sure.

CP8
There was no easy attack point near CP8.  It was crucial that I followed a sharp bearing from 7, which I did to find it. 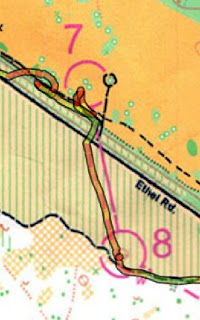 CP9
Here, I used the main road's intersection into the vegetation boundary, went southwest for 100m, and then cut southeast-ish for 100m.  It got me into the ballpark to be able to visually locate it in the vicinity. 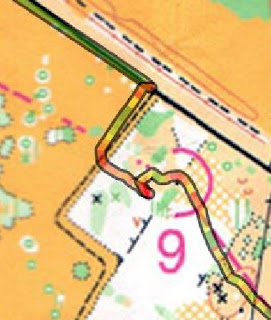 CP10, 11, 12
These were a matter of shooting direct bearings to locate the controls.  The forestry would also keep me off a straight line, so I had to hunt on occasion and use map reading skills to locate where I was in relation to the control.

For instance, on CP10, I actually found the man-made objects at A first (black X on map).  Upon identifying that on the map, I knew I had to head back north.  I needed to find the end of a long hill (B) to hone in on the control at C, which was a small knoll (or small mound in layman's terms). 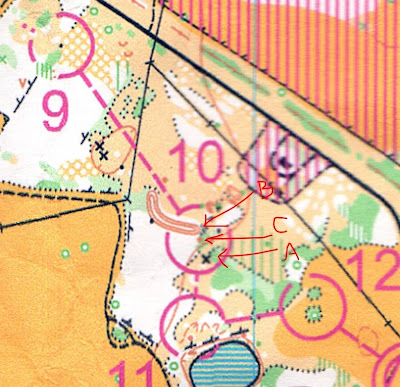 All in all, I didn't get hung up on any of them, except CP1.  It's always the first one that gets me, while I adjust and re-calibrate my bearings and distance judgment.

GREEN COURSE
After a quick bathroom break and refuel, I bought a green and orange map, and headed out on the green.  Little did I know the green was almost identical to the blue course.  This wasn't what I wanted.  I wanted completely new controls.  Oh well.  Nothing major to note on this one.

The volunteers were wanting to shut things down at this hour, but I promised them a quick completion time :) 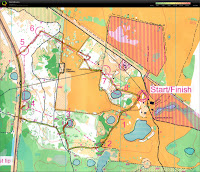 CP7
Upon GPS replay, I nailed all of them effortlessly, except CP7.  Looks like I missed that one altogether.  Leaving CP6, which at that point, my legs were cramping severely, I took the challenge of shooting a hail-mary 750m long bushwhack.  That's a huge distance with a potential for a large margin of error at the end of it.

After counting 680, I ran into a giant banana spider's cobweb.  I screamed the typical "AHHHH!" and swung my arms in a terrifying state.  The sudden shock sent my legs cramping severely again!  Not only was I caught in an entangled web, but I was paralyzed with an excruciating calf cramp.  Once I calmed and started clearing the fibrous web from my body, I looked up and noticed I had taken out the main portion of the 8ft web structure and the spider was nowhere to be found.  I quickly felt all over myself and I saw the spider hanging inches from my head!  Again, I went into a frenzy state screaming "BAAHHHHHH!"  The beastly spider finally thudded on the ground like a rock, with all its weight.  If you guys have never seen a banana spider before, they can span the size of an open hand.  It is very freaky watching them move. 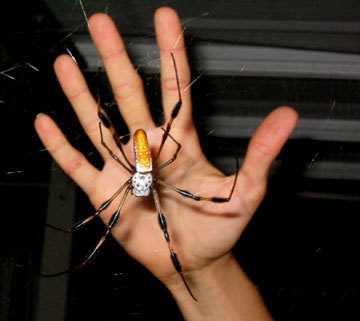 So at 680m, I lost count in my quarrel with the spider and started hunting for a CP.  I found one (A), punched it and ran off.  If I measured 750m on map, I should really be aiming for at least 800m in real life because one step during a bushwhack is usually shorter than 1m (as opposed to one step in a jog).  Turns out, I spotted a power line, which led me to the intersection of another CP (B).  I deemed that the right one and punched that for CP7 again.  But after reviewing the GPS, I didn't even get the right one.  Had I read the clue of "earth embankment" I would have realized it right away (C), but I was too tired at the time. 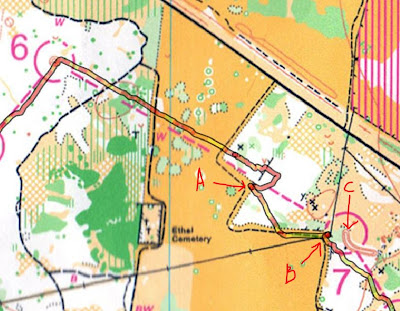 CP5
At this control, there was no distinctive land feature available to use to attack CP5.  However, upon closer look at the map, there are tiny tick marks to the left of the road.  Out on the field, these corresponded to power line structures.  I counted 3 after the intersection of another set of power lines (circled red) before using that point to shoot a direct bearing to CP5.  It worked perfectly. 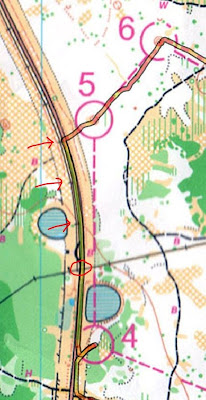 It was a strong performing day.  Three big courses with only one error and one hangup is success in my book.
Posted by Thoe99 at 11:40 AM