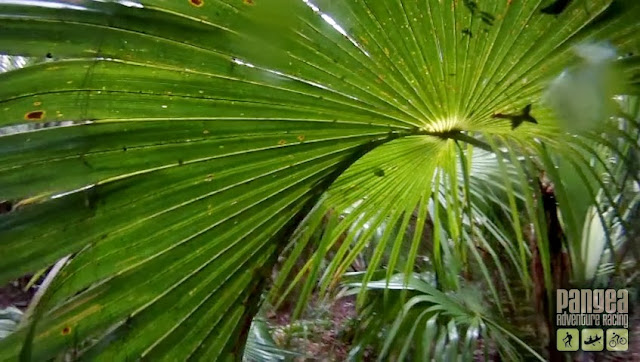 The Superhero AR brings out the comic in us racers.  People come dressed up as their favorite heroes while racing.  We came as The Canyoneros! :D  This time we were joined by eagle scout and triathlete Tim Cowan, making a transition over from team Swamp Gators.

Blue Spring State Park has a lot of history and contained a number of unique elements for us to race on--tubing along a blue river, technical bike trails, sugar sand biking, running, canoeing, swamp trekking, and orienteering.  6hr races are frantically fast-paced compared to the longer ones. 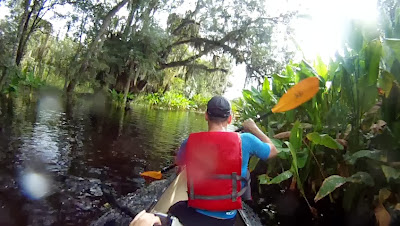 We drew marbles at the beginning and started on the canoe, with a staggered start.  The three of us had not practiced a 3-man canoeing together before, but we bolted out fast, firing on a superhero-like 12 cylinders ;)  Nate and I had honed our skills together by now, but Tim's past rowing experience turbocharged our boat.  The six controls on this leg did not slow us down whatsoever.  Well, maybe slightly at CP13.

Up next was the trek portion.  We had a slight mishap after leaving CP1, we accidently took the southern trail, but quickly corrected.  The other controls were pretty easy to find.  There were a lot of people around in this large turnout of a race.


Nate, first to get the manliest flowered float 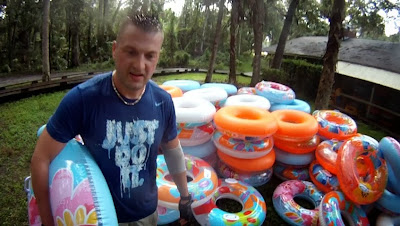 The only time I have done tubing was in the lazy river at Typhoon Lagoon, but there was a strong artificial current to allow you just sit and float with the current.  After dropping off our backpacks and picking up tubes to float in the river, Tim jetted off hunting for CP6 and 7.  He just about went swimming towards it while Nate and I tried to figure out how the hell to move up stream with them.  I eventually walked the shallow areas near the shore. 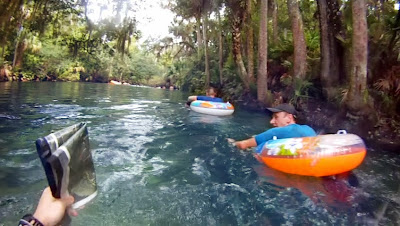 float with two tubes, swim on top of one, or walk with one around you? 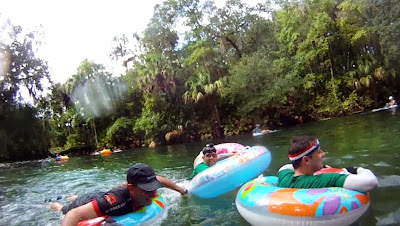 how about the butterly?

On our way back, I experimented with other techniques, like laying on top of the donut while swimming.  It worked, but was still quite slow, as I looked to my left to see Tim doing the butterfly past me.  Once others showed me the way, I jumped on top of the float, sat on it backwards and paddled.  That was the technique!

Keeping up on the map while doing technical biking can be pretty tough.  You constantly lose your map position, so I made a strong effort to focus.  There was an extensive network of trails here, in which we had to punch controls along the way.  Yellow to blue, to orange, to green and back to yellow was the route, all while taking right-hand turns.  We picked up all of them but once we hit green, we noticed Eaglin's team going backward out of it, with him saying he couldn't find the second green one.  With that note, we also only found one green, but decided to just continue following directions of bailing out of the yellow on the return route. 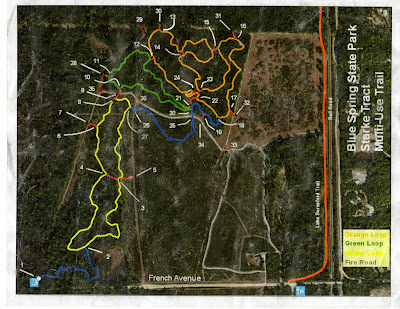 At the punch station, there were two more controls on bike given to us at a kiosk.  We had to memorize the location and the clues.  The first one was easy--at a boat launch.  The other one faded from our map memory and we accidently overshot it and spent a few minutes backtracking to find it. 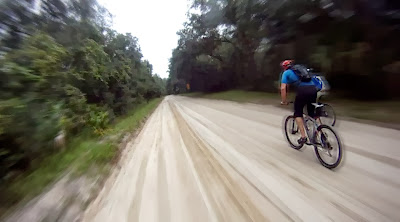 We headed back to the Main TA and continued to the Bike, passing a couple controls along the way.  It was raining again.

At the Bike TA, we switched to foot and overshot CP26 without being able to find it, despite measuring precisely and seeing this "root stock".  There was no control there, however, so we left it for the way back. 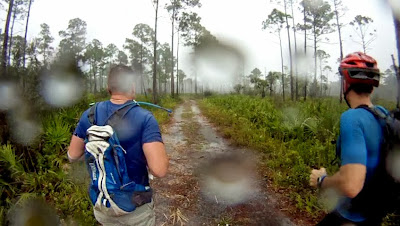 Another one that was somewhat tough was CP27.  A couple teams cut into the fields prematurely, and so did we, but our suspicions bailed us out and proved successful.  We found the trail bend we were looking for, shot a bearing and ran directly into it.


these spikes are instant death! 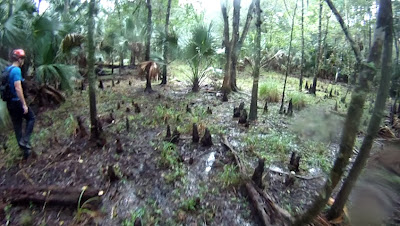 The rest of the controls here were a matter of following a bearing and counting paces precisely to where we needed to be.  A couple of them were found with some nearby teams, however.  One noteworthy control was CP31.  We came out of CP30 slightly disoriented, ran down and up the main trail path, before realizing we overshot CP28, which we originally wanted to shoot a direct bearing towards 31 with.  Once we kinda found CP28 again, we trucked west into the tall jungles of palmettos.  These palmettos were 15ft high!  We couldn't see very far ahead.  It made it tough to stay in a straight line.  But we eventually made our way to St. Johns' River, about 100m south of CP31. 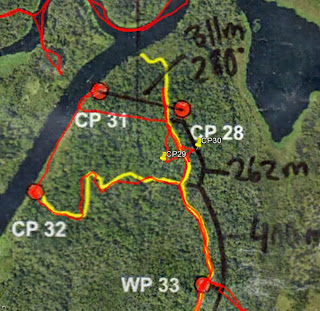 We had a long jog back to the Bike TA, but it was kept out of the monotonous zone through conversations of 700lb gators and next year's Atomic AR.  I re-measured the distance from an intersection to the "root stock" of CP26 again, the one we couldn't find on the way in from the east.  Good ole' Nate and his CP honing abilities would not deny us of missing one.


this is our trek 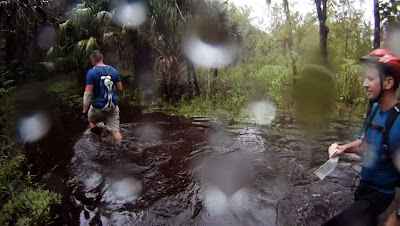 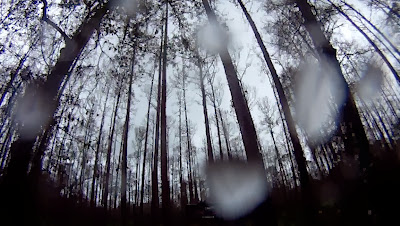 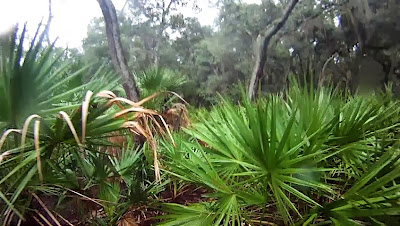 Bike 3
The ride to our last CP was uneventful, and I had remembered a shortcut to it from the morning Trek.  CP34 stated "100m @ 135° from CP24".  We bushwhacked through thick vines, only to end up on another road.  Had we known that, we could have saved time and easily taken the bikes to the road. 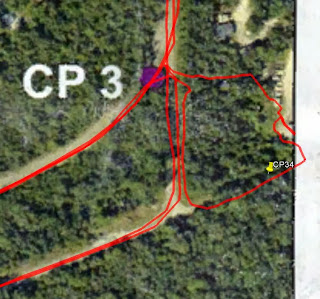 Spirits were high as we finished just under 5hrs in a 6hr race.  We refreshed and refreshed the leaderboards on our cell phones, and as time expired, our rank stood at 3rd! 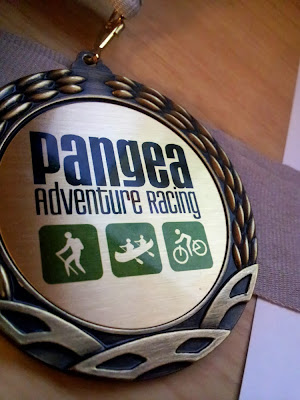