The sky was lighting up again as we made our way to Rice Creek TA.  We were told they cancelled the following paddling leg, as the race directors determined they needed to move the teams west quicker.  That and people started hating the paddling legs haha.  It was a great relief, since we were planning to can that leg anyways.  One...it was paddling and we started hating it too, and two...I had predicted many of the controls there might be pretty tough to navigate to. 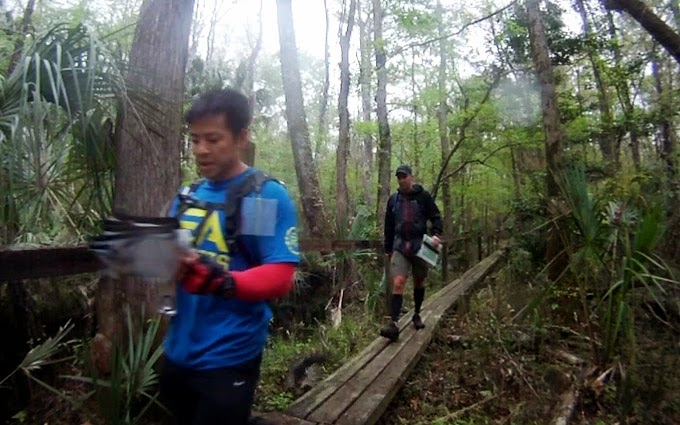 Up next was a trekking leg.  The sky was overcast and the environment was like a tropical jungle with lots of swamp.  It was one of the coolest sights!  We began by latching onto an incorrect set of trails.  This burned a an hour or so before we found the right one.  Once we lined up the trail map to ours, we immediately set foot to find the CPs here fairly easily. 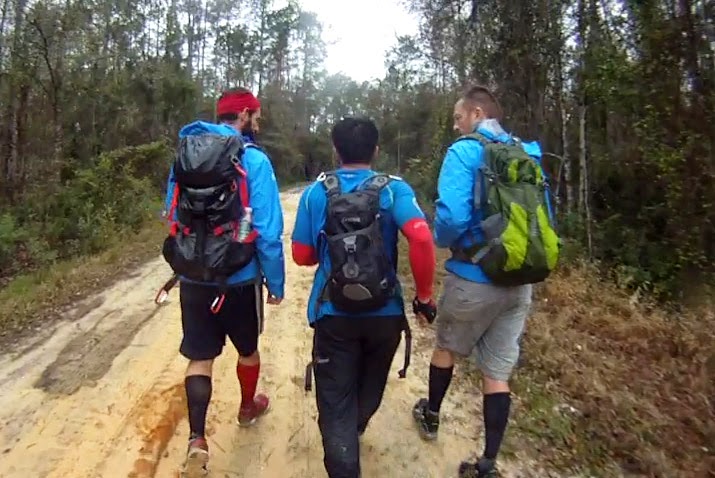 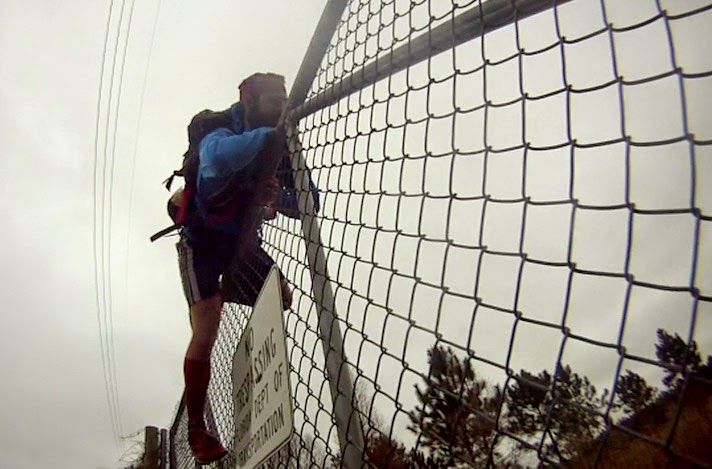 At Backwoods TA, there was a bonus trek course.  We had to plot UTM coordinates for five control points.  This was the first time I had to plot them, and there was another team nearby who noticed my difficulty, so they graciously gave me tips.  We cleared this section pretty fast, utilizing a 60 second shuffle, 60 second walk methodology.

There was a long bike ride to the next stop at Newnan's TA.  We easily picked up a handful of controls along the way.

Somehow, Tim had managed to get a hold of a 5-hour energy shot, I think from Nate's bin.  It supercharged him so much he took navigation and bolted forward on bike at a pace that maxed us all out!  I'm not sure he realized it at the time until we told him about it afterwards.  But hey, he was hitting all of his points, so we left him at it.  Once we got to Newnan's TA by nightfall, Tim proclaimed, "I feel like the race just started!".  Those 5-hour energy shots had some serious kick to it for him. 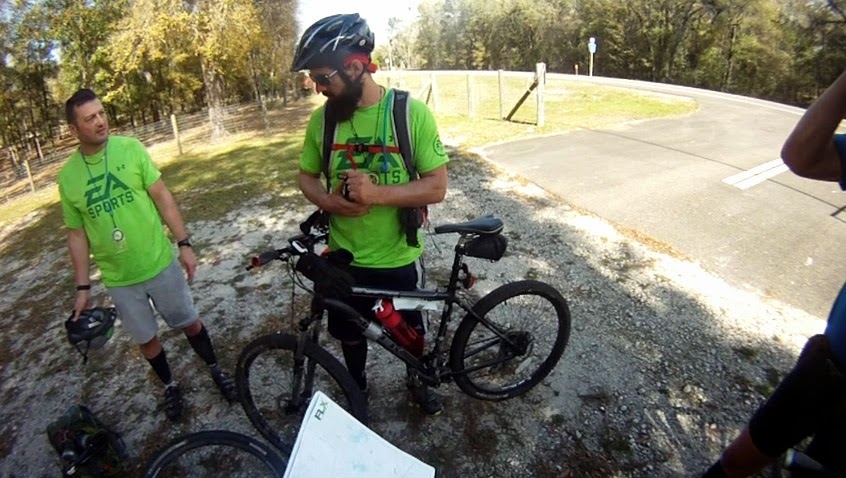 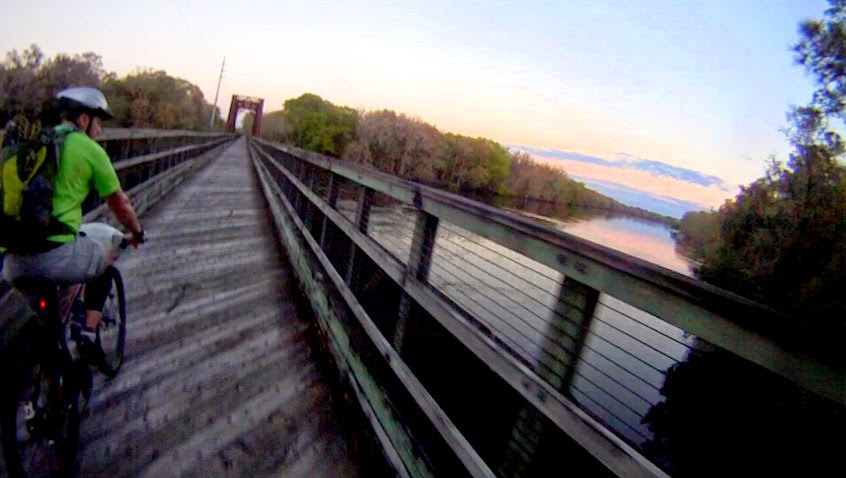 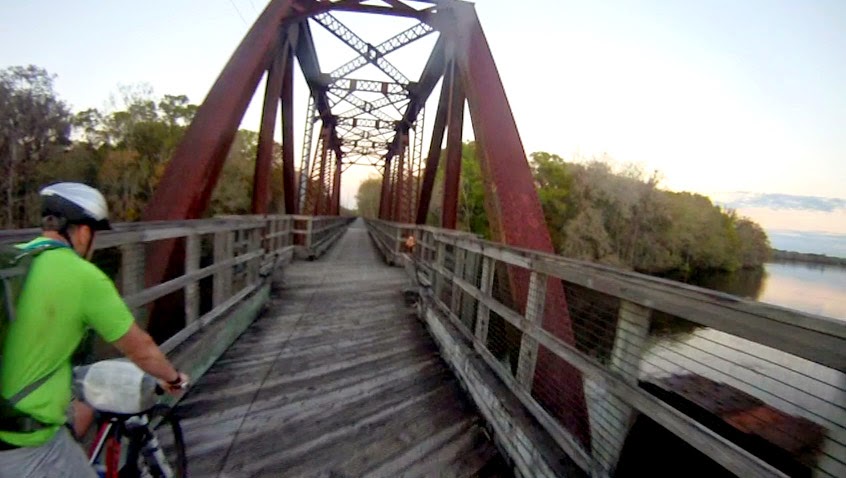 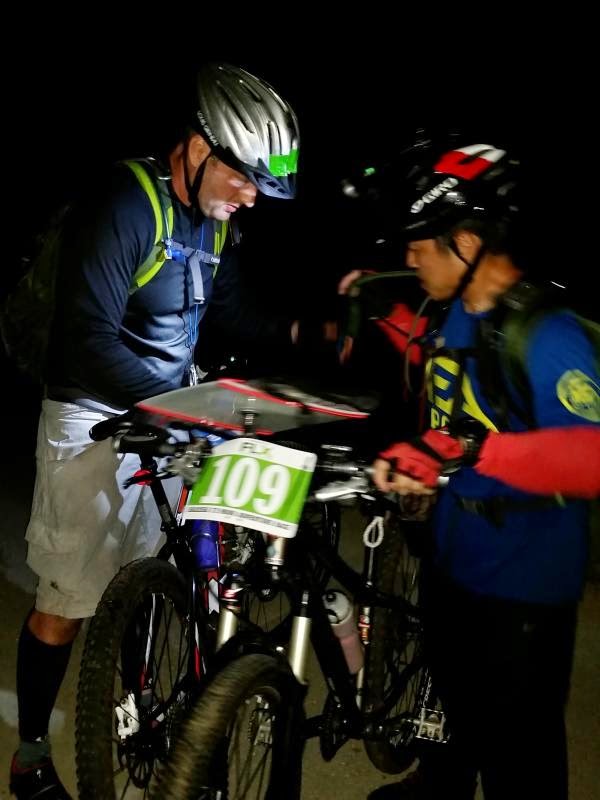 Newnan's TA was the start of a giant swamp, and CP47 and 48 were situated deep in it.  This place had massive cypress trees everywhere, fallen over, uprooted, you name it.  There were also plenty of cypress elbows, aka death stumps.  We saw plenty of giant snails, most of them the size of a fist.  So in the night, we made an attempt to shoot a 400m direct bearing to CP47 but could not find it.  We found only a two CPs in this entire trekking section before Tim started spiraling into hypothermia.  Nightfall brought in low 40s temperatures.  When Wolverton and I saw him convulsing like someone with Parkinson's disease, we immediately cut off any progress, he busted out the emergency blankets to wear under the jacket, and we all went back to the TA where there was a campfire.  As we stumbled back, Tim's competitive mindset forced him to utter, "Hien, give me six 5-hour energy shots and I will finish the race!"  Adventure racers are a crazy bunch alright :D 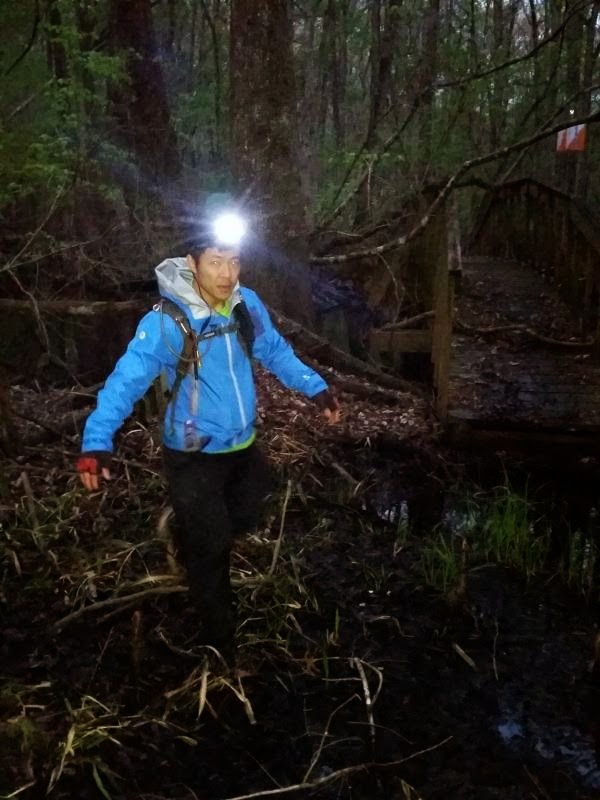 It was apparent everyone was dead tired, cold, and miserable on this second night.  We made the call to warm up at the campfire and then catch some sleep in our sleeping bags.  Tim and Wolverton slept by the fire since they didn't have a sleeping bag.  In the middle of the night, Wolverton deliriously wakes up to the horror of people beating him with clothes.  "WTF is going on," he thought.  He was on fire!  A campfire log had fallen on him and burnt his clothes and racers nearby were trying to put it out!  Seeing this, the race staff decided to lend them both a sleeping bag and a spot in the staff tent.

Nate and I woke up after two hours of sleep.  It was a significant recharge to a heavily degrading team.  We had only gotten two controls in the last 6hrs.  But now we were ready to get back to work.  We touched basis with Tim and Wolverton, and parted ways with them.  It was sad to finally separate the two EA teams after sticking together for a solid two days.

The morning brought optimism.  Ron Eaglin was out and about, and offered to lead us and a few other teams to CP47, which we missed that previous night.

We then transitioned to canoeing, where the boat launch was in the same giant swamp we had just trekked over.  How was there a channel that existed there?  What we saw the previous night was a giant swamp with several streams of water here and there.  I'm not sure I recalled a channel that led from the transition area to the lake, but in the morning after some much needed rest, it was clear. 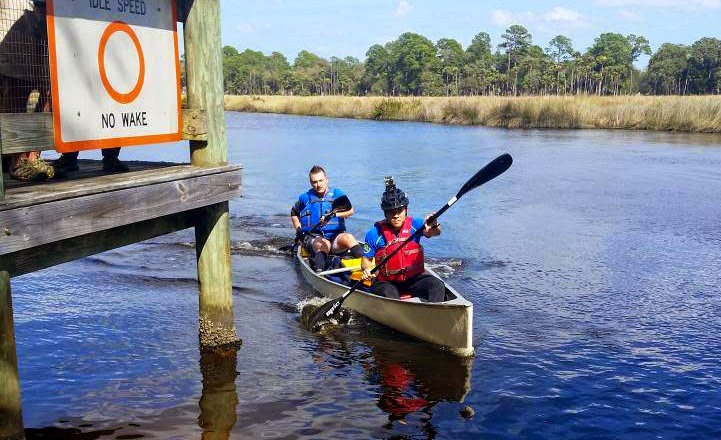 Canoeing on the lake was very pleasant at first--the water was as smooth as glass.  That is until the sun rose and brought in billowing winds to the lake.  We DID NOT wanna capsize on this lake in really cold conditions.  There were two control points along the way to the next stop at Kate's Fish Camp.

Once there, we transitioned onto foot, where Nate and I picked up one trek control before calling the rest of the other controls off.  Teams reported how tough that section was, both in terms of navigation and bushwhacking conditions.  Nate's knees were an infected mess, swollen, bloodied and battered by thorns in previous days so he was in little shape to beat them up some more.  So we walked back to the TA again.  There, I wanted to go light, so I opted not to pack jackets and head lamps.  On the flipside, Tim and Wolverton had banked some more sleep and skipped the paddle section, and decided to ride their bikes quicker to the other side of the lake instead, but for no control points.

Amazingly, both of our teams re-united at this transition area.  We felt great synergy again.  Tim and I were swapping navigation roles, where one guy would have one set of maps viewable on the bike map board, and the other would have the next set of maps, seamlessly planning and transitioning without a hiccup.  Nate and Wolverton also did a fine job of hunting/punching the controls.