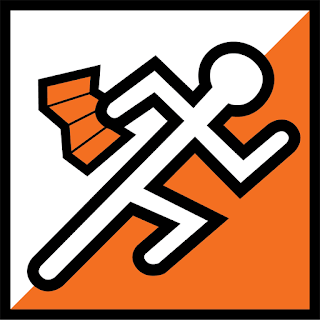 Race director Ron Eaglin hosted an 8hr orienteering event, where legendary Gord Hunter designed a marathon of a course at Holder Mine.  Gord was of great significance in our humble beginnings. 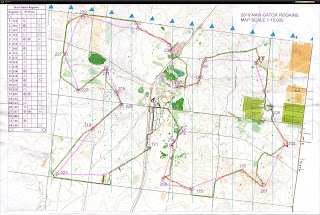 We got there a little later than we thought and had about 5 minutes to plan the route.  I chose a clockwise route starting with the lower left quadrant (the start/finish is in the middle of the map).  The first course was flowing with most control points deep in the woods.  I had full focus and held sharp bearings.  After CP116, my knees were getting torn up and you can see I was making route choices based on not having to bushwhack (going to CP204 and 115).  I was noticeably slower during the bushwhack because of it.  Once I put long pants on for the 2nd course, I was able to bulldoze through the brush, but then I was feeling the effects of the heat.  There's always a trade-off with going shorts or long pants.  You can see the temps make a jump to 97F during the 2nd half below.  I finished the first course in 4hrs 6min. 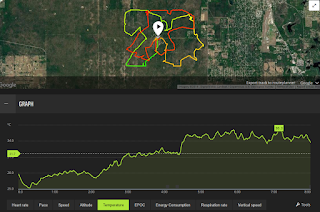 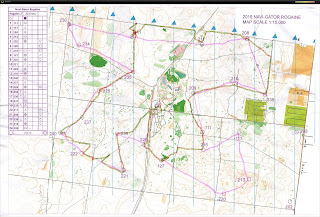 I don't know what happened to me after half-time.  I had a series of mini-mistakes until CP240, including running out of the transition area and then back to click the "start", and then doing it again--running out and then back to get more food.  Usually my teammates help me do all that other stuff, but today we were all solo to brush up on navigational skills.  Once I got to CP240, I had to tell myself 'that's enough, concentrate!'.  This course also had the same clockwise route, starting with the lower left quadrant.

Overall, it was great exercise in many areas--physical, mental, contour reading, on-the-fly route planning, and pace setting.  I finished the race with 5 minutes to spare, good for second place overall.  I also literally ran a marathon in the woods today.