The race came and went and my impression of the race is that it seemed to span a few weeks' worth of time, rather than a few days.  That's how the memory recalls it, at least.  There were so many things to do, so many legs of race, and so many days and nights!  We traversed exactly 350km on foot, bike, and canoe, going from one side of Florida to the other.  What an expedition!


pre-race burrito while listening to instructions 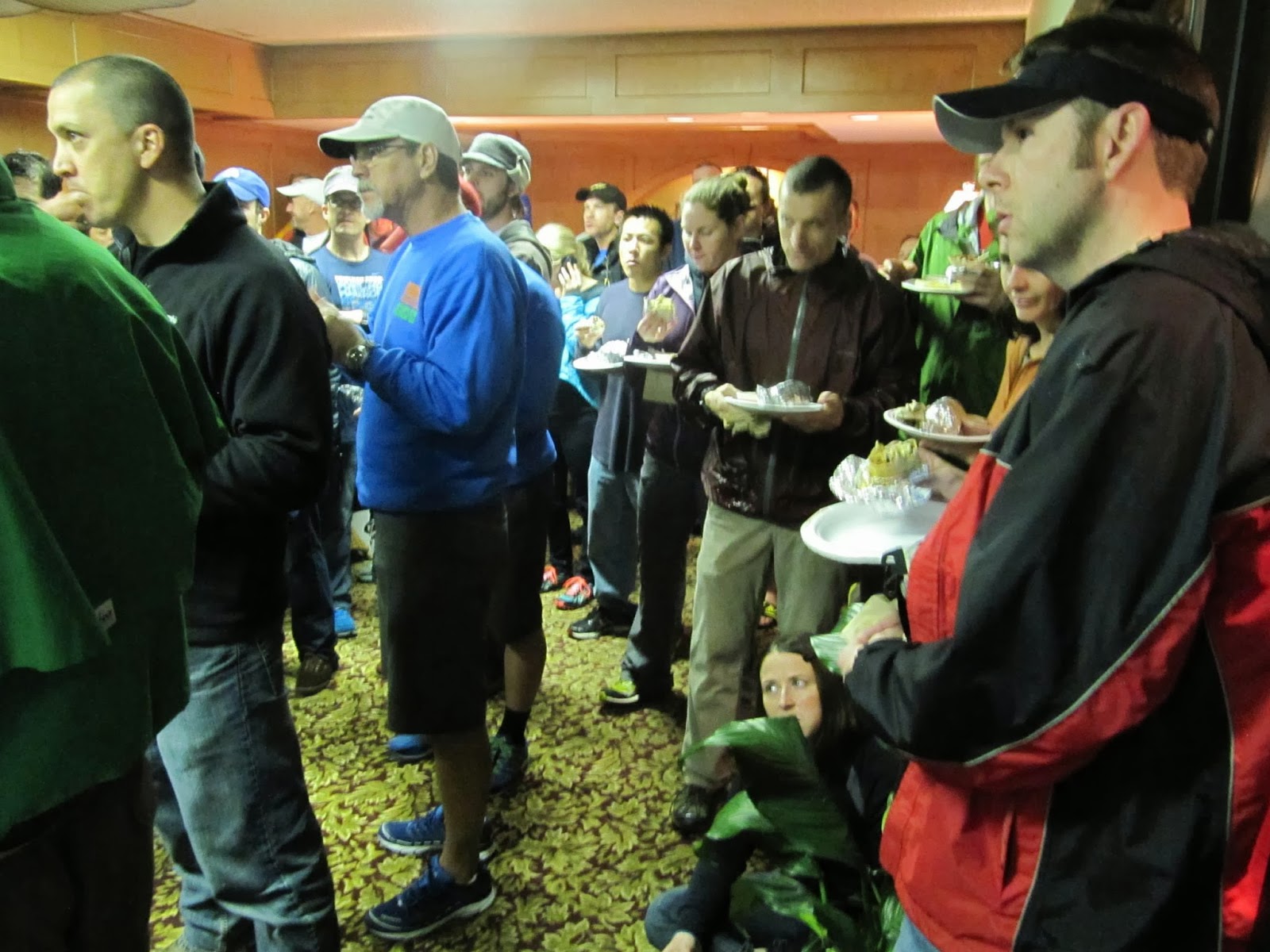 It started with us all gathering at a hotel in Ormond Beach, east side of Florida, a day before the start.  We gathered gear bins and bikes, to load into U-hauls.  It was rather windy and chilly that night and as we brought our equipment over across the street, it started to pour.  Great...what a start.  The weather forecast looked bright and sunny for the next three days, which got our smiles on.  However, the caveat was that it had some jaw-dropping 35 degree temperatures in the night. 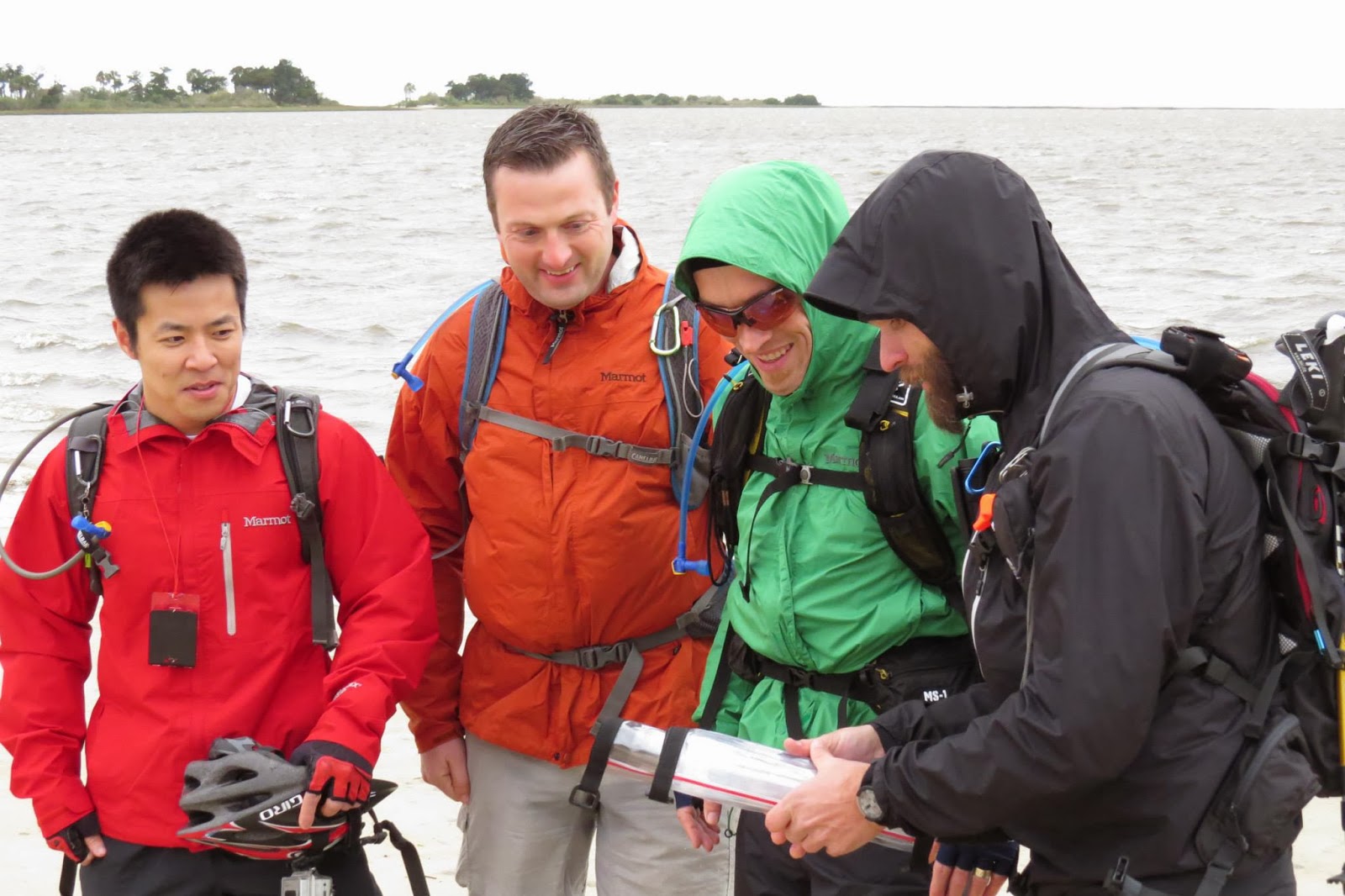 Boat 1
The next morning, we were bused to the west coast to start a paddling section.  We received a wad of maps to look over during the ride.  Once there, the water was deemed too choppy by the race director, so we re-grouped and launched our boats off another area, more inland.

We ran to the boat launch.  There was a clog of boats as teams tried to squeeze their way into only two areas you could drop the boats into water.  Bill and Robert managed to get in first and paddled hard down river. 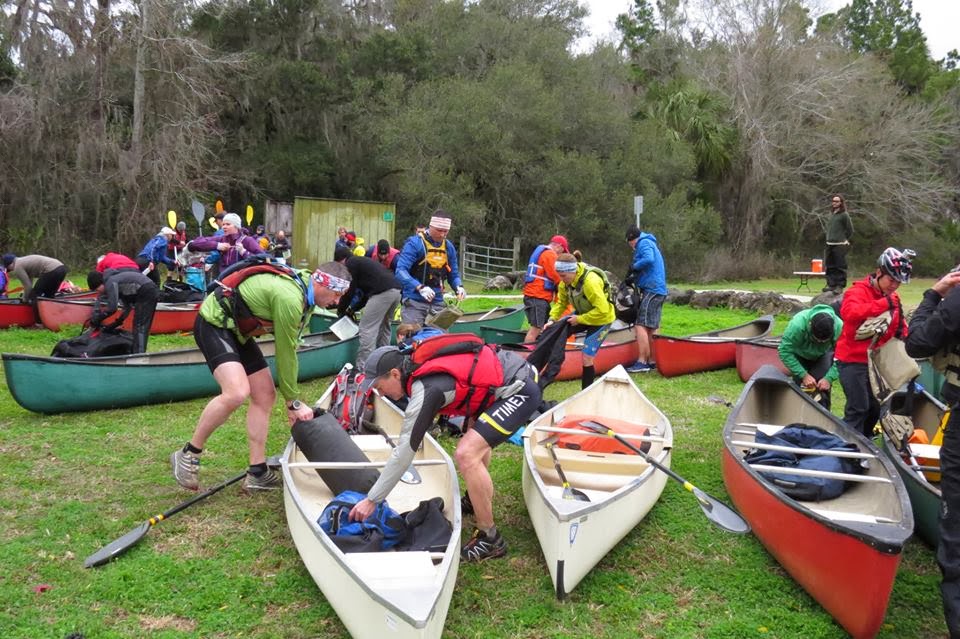 After finding one control point (CP) downstream, we returned back to where we came from to start a running section. 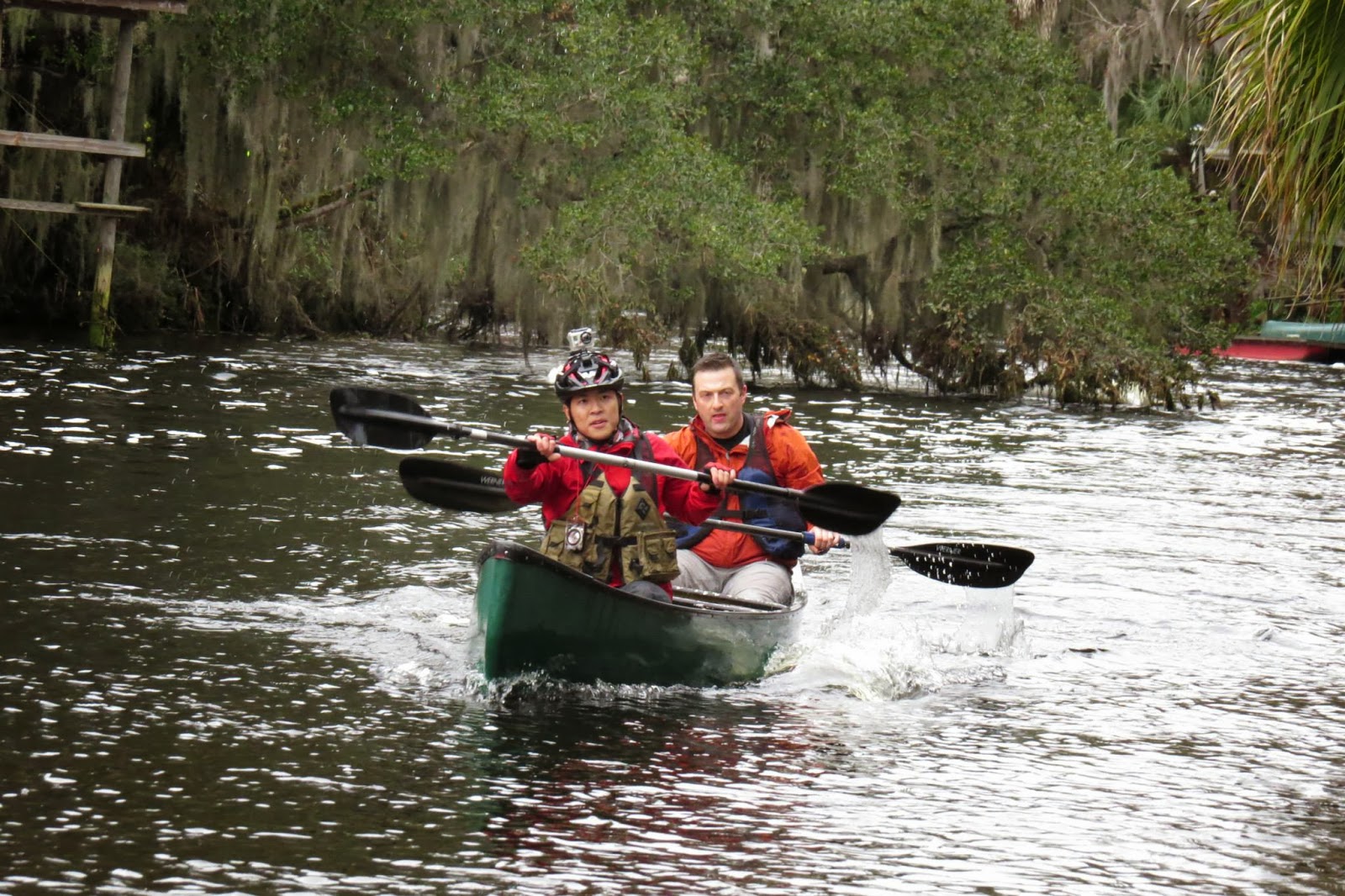 There were four control points in this section, after which ended in a different location at Lock TA.  We ran the entire leg and found them all with no problems, gathering CP3, 4, 5, then a bushwhack northwest towards CP6. 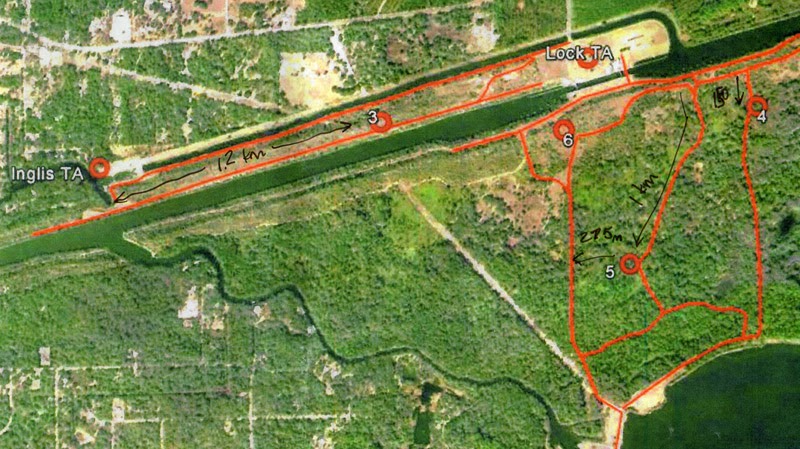 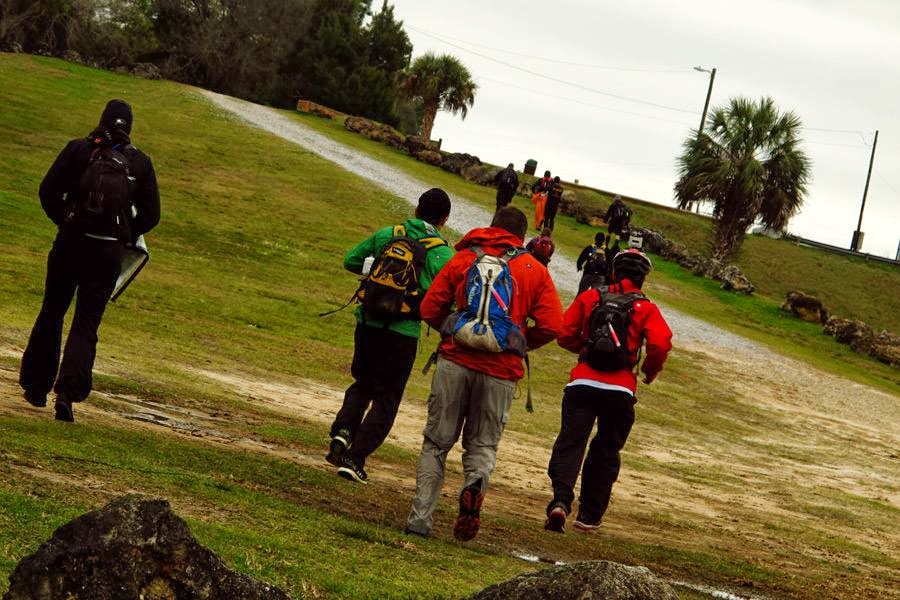 Surprisingly, we received access to gear bins here at Lock TA.  We switched to biking shoes and headed over to KP Hole TA.  Along the way, we picked up CP5.  Bill also somehow managed to unthread one of his pedals off, but we quickly fixed it.


bike repairs early on in the race

At KP Hole TA, we transitioned back into boats and paddled north a few kilometers to Rainbow TA.  The water on this paddling section was crystal clear, as you could see the glistening green seagrass and sandy floor below.


this water just made you wanna jump in and swim 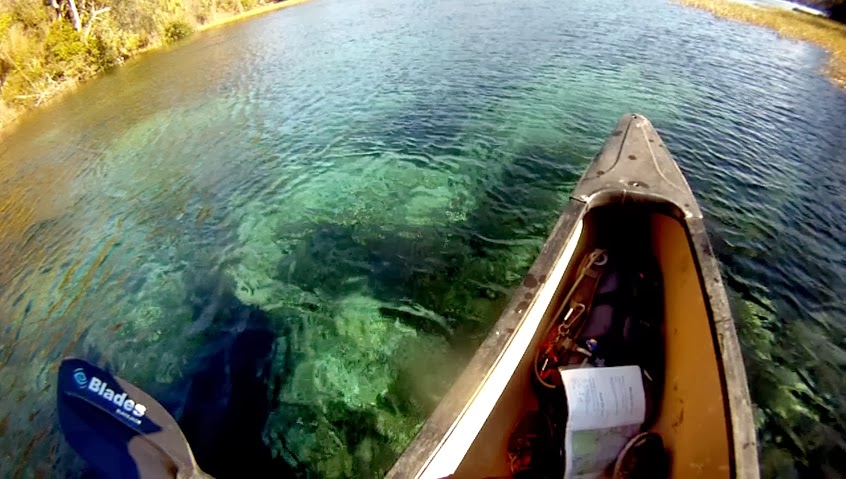 On the race notes, it was said that we had to spend at least 25 minutes at this section.  On map, the entire park spanned only 400m wide, which made it very feasible.  To start, we headed up a trail too far west, but quickly corrected when we saw another team on the right trail.  I was navigating at the time and followed another team to the first control.  It appeared too easy, so I mistakenly shut the maps off and just followed the same team to the next control.  We instantly got derailed as both teams lost track and started to try to find their bearings again.  We ran into yet a 3rd team who were just as lost. 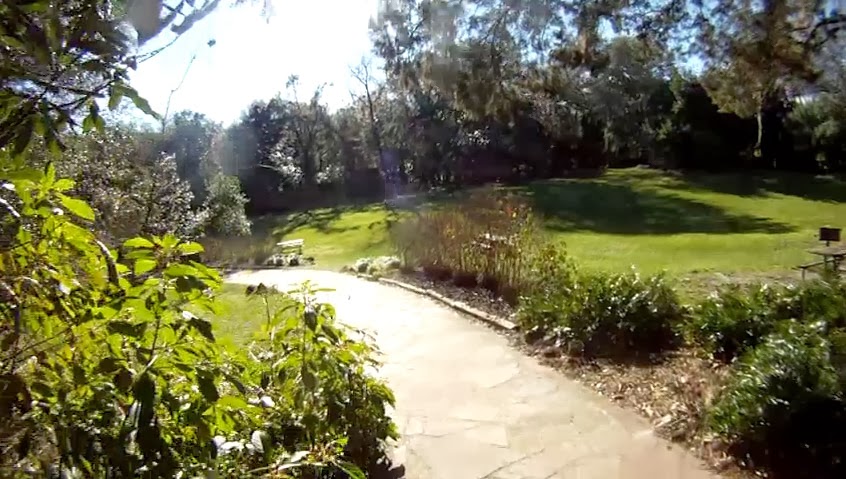 To fix it, we ran all the way back to the bathrooms, recalibrated and found the remaining two control points.  It took us 43 minutes instead.  Lesson learned, don't ever turn off the navigation.

We had another paddle leg to bring us to Blue TA, where we biked to Pruitt TA.

At Pruitt TA, we had access to our gear bins.  We camped and had a full meal.  Here, 12yr old Hunter (from team Florida Xtreme/Hunter) had played a prank on me by putting a toy rubber snake in my bin.  Here is the footage.  I'll get you back sometime in the future ;)

The sun was going down now, getting cooler, and as we walked into the start of this trekking section, the moon was beginning to rise.  It was forecast to get down to 35F this night, so I wore every piece of cold clothing I had.

walking away from the sunset and into the chilling night 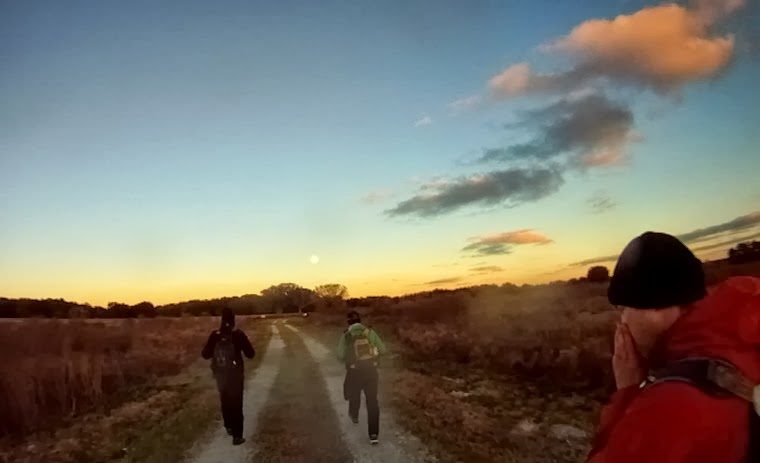 What was crucial on this leg was that you had to look at the kiosk along the trail to understand that there were more trails to travel on, rather than the few illustrated on the maps we had.  Luckily Robert had a digital camera and was able to snap me some photos that really helped.  This was backed by some great pace counting by Nate and Bill.

We found CP11 and 12 while helping out team The Derailleurs.  Heading to CP13, we walked down a trail that was mapped on the kiosk, but not on our maps.  However, the trail became faint and eventually disappeared, so we used some brute force foraging to eventually find it.  We actually found it while bailing out to the road east of us to re-calibrate :)

Ross TA was a few hundred meters away and the start of a super long bike ride in Santos.  Robert took over the navigational role here, as he knew these trails the best out of all of us.  Looking at the map and being here a couple times before, I knew this section would provide the toughest navigation of them all, esp. in the night.  The controls were not on the trails, as they usually are for technical biking.  They were about 100m off the trails, which made it very challenging to find if you did not locate your attack points precisely. 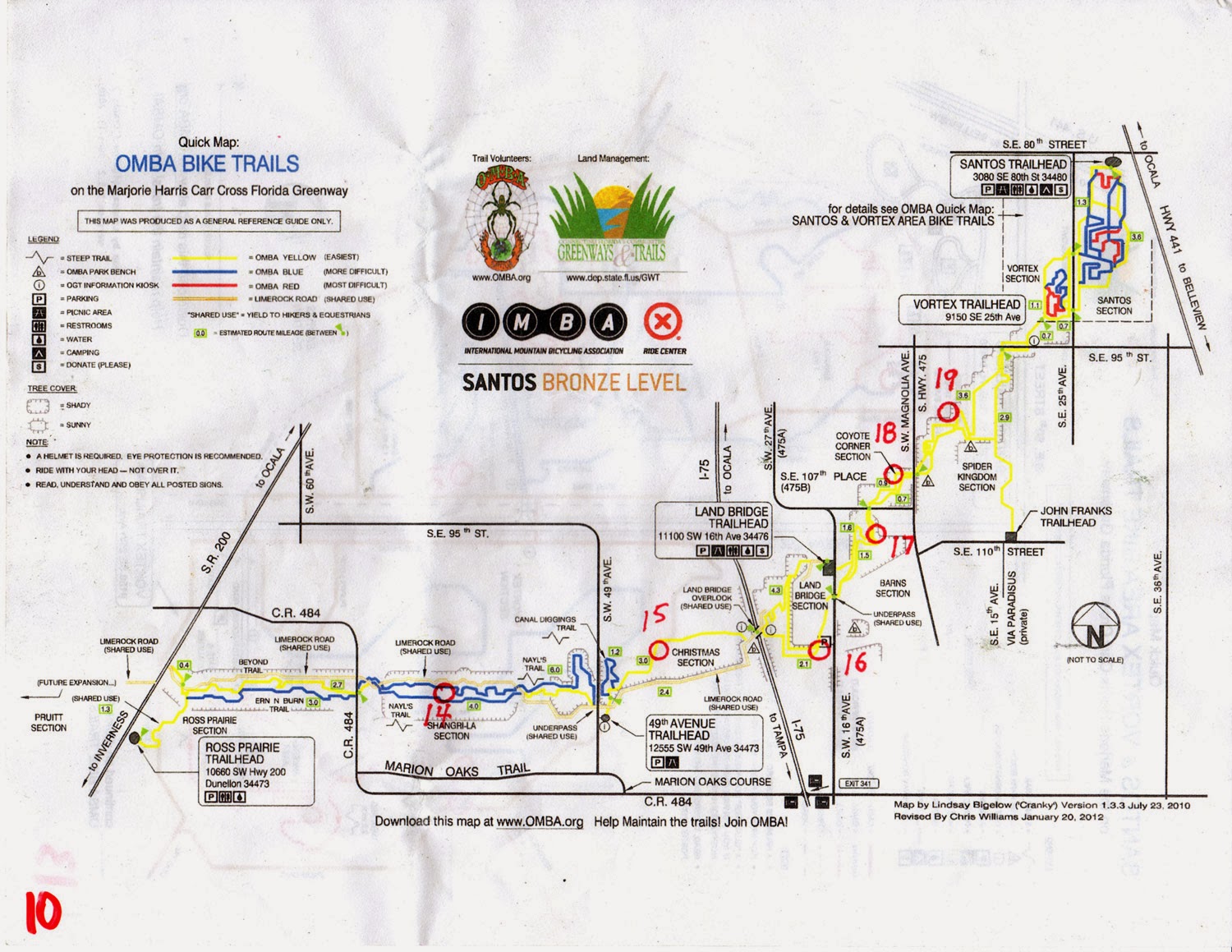 Sure enough, CP14 started off the time consuming hunting sessions.  We attacked many times and used many techniques to find the correct attack point--go 1.5km to a downhill that kinked southeast, find the re-entrant, shoot in; if not, locate where the two blue trails are closest together down the trail, and measure backwards.  Eventually, we found it.

Up to this point, we had fallen behind a familiar pack of teams, but the first few controls here were so tough we caught back up to them as we ran into the same pack again.  Luckily, we were always the first to find the controls for the pack.  Anytime we shouted to call our control puncher guy, it was like waking up all the other zombies and having them head towards us :)