So we were still on the trails of Santos early morning Friday, making our way to the Vortex section.  CP16 was a dastardly control that had about 67 teams searching for it.  We finally got tipped off by another team.  You can see how many times we would try the same things over and over in our record GPS route below.  This was the "snowplow" control. 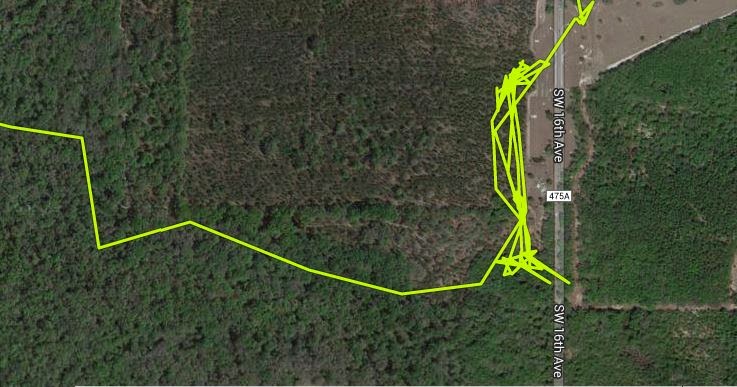 CP19 also fooled us since it was really tough to measure the distance of a loopy, curling trail.  But up to this point, we had not skipped one control and were determined not to miss any. 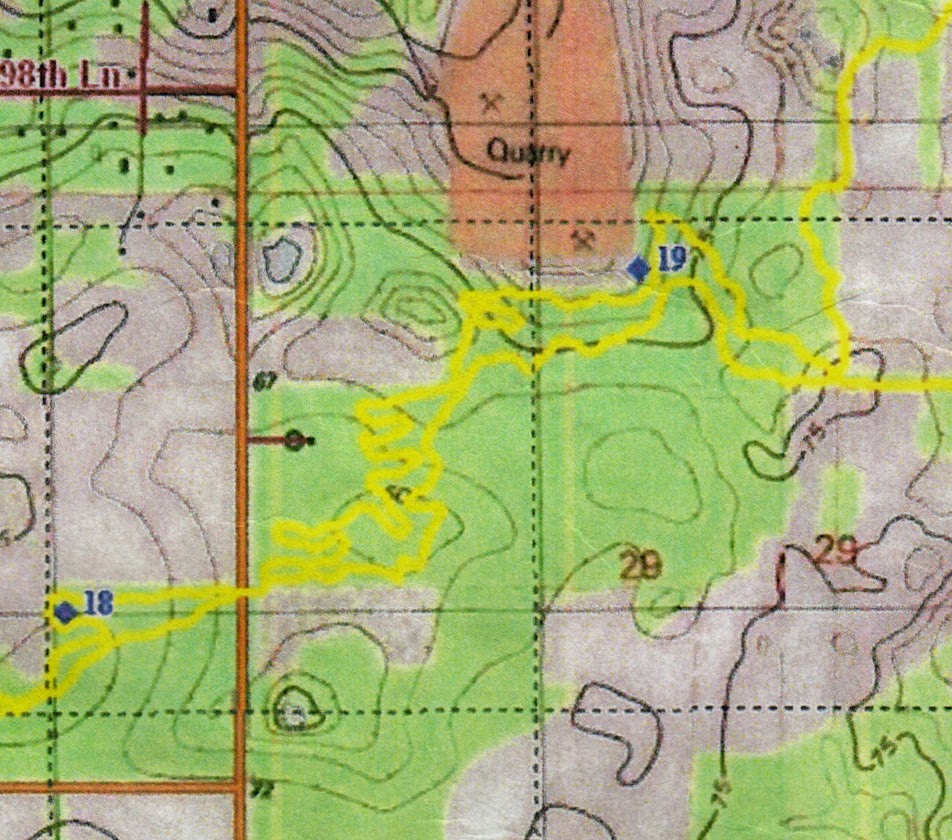 Upon reaching the Vortex sections of Santos, Robert had had enough of Santos.  A switch flipped, and he turned his navigational rampage on.  "Gotta get out of here!" he would exclaim.  For the next four controls, he pinpointed them with a crazy sense of urgency.  Oh...the "vent" control stumped us for a bit, but other than that, he got us out of Santos with utmost authority.  There was one control, at CP22, with a clue of "near vent" that in real life, was a rocky pit into a portal leading to another dimension.  It was quite surreal to see such an abyss of a hole in the ground.  It only stumped us because on one map, it was located before the red trails, and on another map, it was illustrated after the red trails. 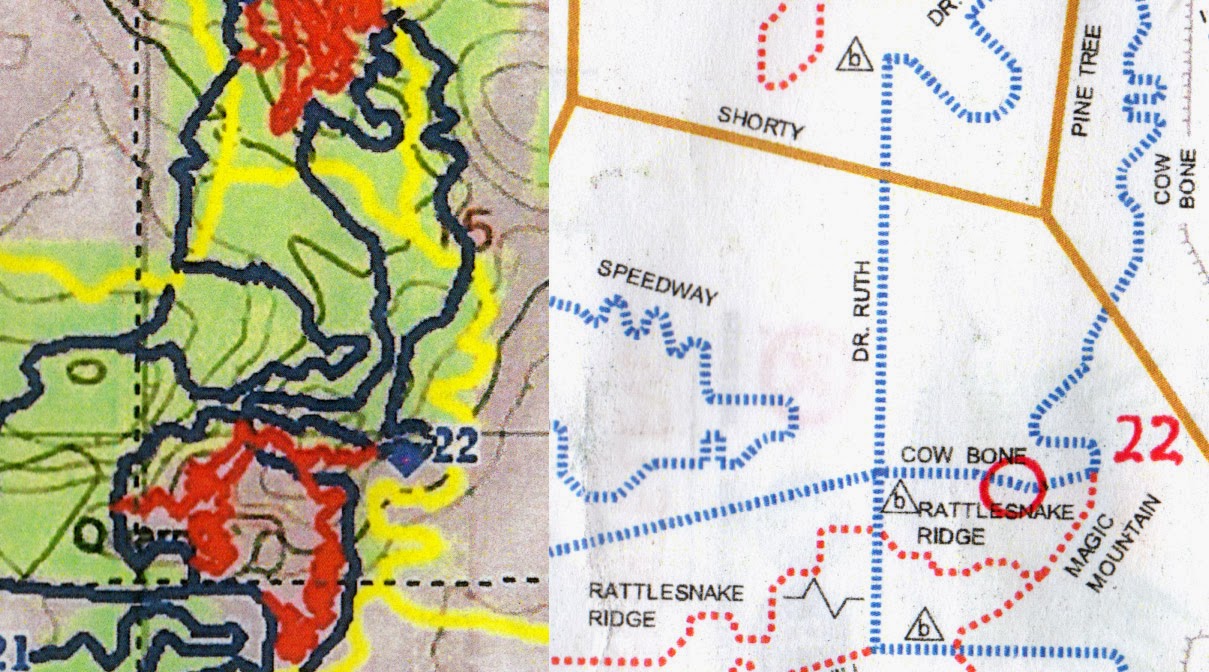 There was a big sigh of relief as we took a breather at a bathroom after completing the trails at Santos.  We ran into another team who one member had on shorts in the near-freezing temps.  He had bust out the emergency blanket already.  A few other guys took shelter in the bathroom in an attempt to warm up.  Conditions were super cold!  35F was reported.

This leg was not done yet.  We also stopped by a Dunkin Donuts to get people some sweets and caffeine.  This stop lifted spirits, but we noticed Bill was developing a cold and could barely talk.

As we started up again and biked into the trails that led up to Marshall TA, you could see and hear the frosty grass crackling beneath us.  We picked up CP24 along the way as the sun was rising. 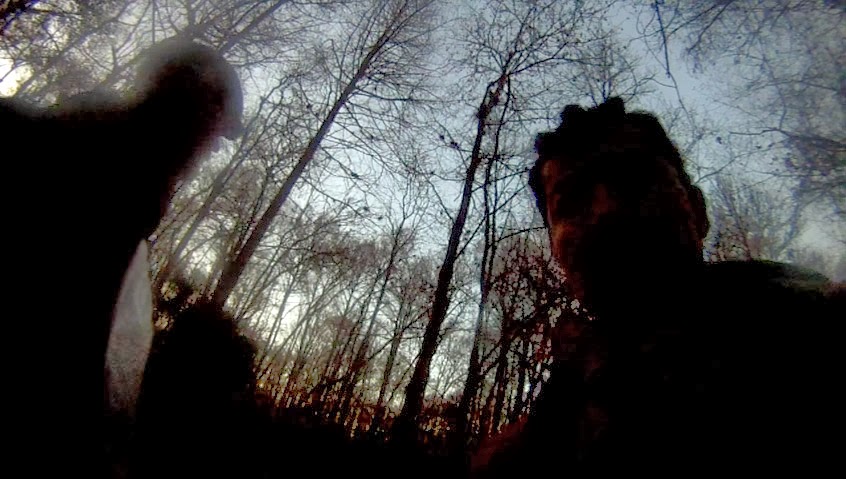 Marshall Swamp was an awe-inspiring area, yet isolated in scary remote wilderness.  In the misty morning we traveled through, there were swampy cypress trees all around you, with its incredible root structure, encased in a layer of fog.  There were dirt trails, rocky trails, muddy trails, and bridges over the swamps. 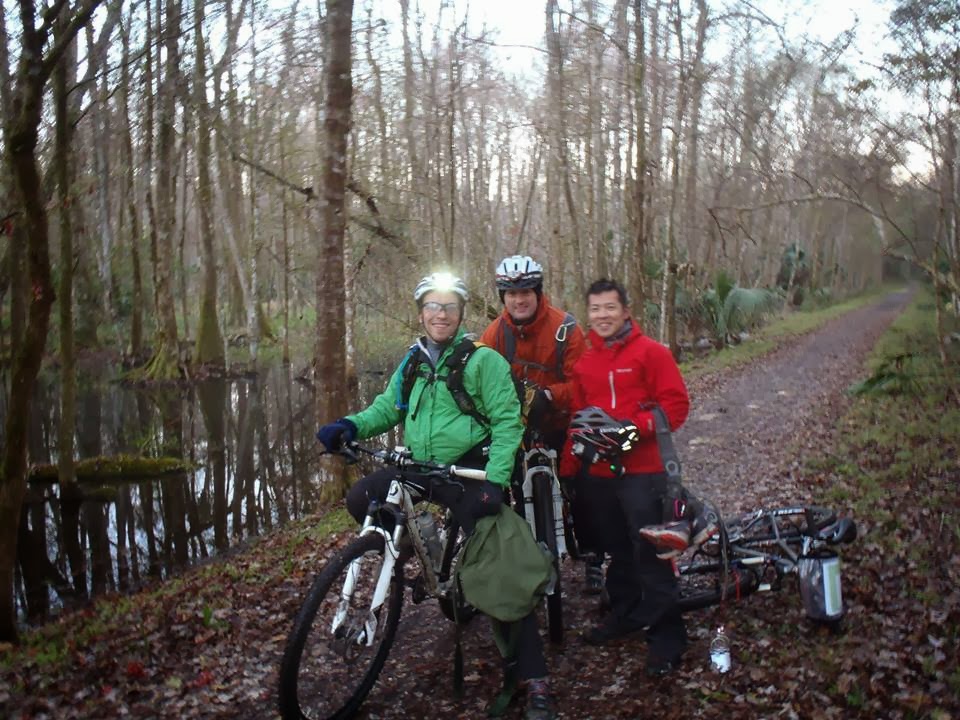 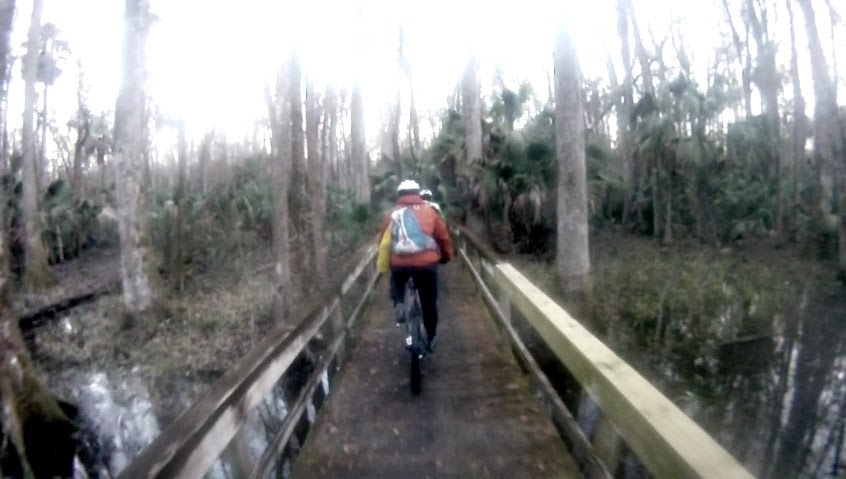 Another meal was on order at this next transition area, and by meal, I mean cans of Chunk soup, scoops of peanut butter, ravioli, MREs, and dry-packed food.  Upon leaving, we headed out to find CP25, which was supposed to be on very wet trails.  At the entrance to the red trails, the team spent some time arguing about whether we could go pass a private property gate.  I looked down and saw hundreds of foot tracks that entered the gate.  Bill and Robert opposed, so we walked up the road some more.  Half-way up the road and after another discussion of "how do we even get to CP25 without being on the supposedly forbidden red trails", I urged the team to bushwhack straight east from where we were to hit those red trails. 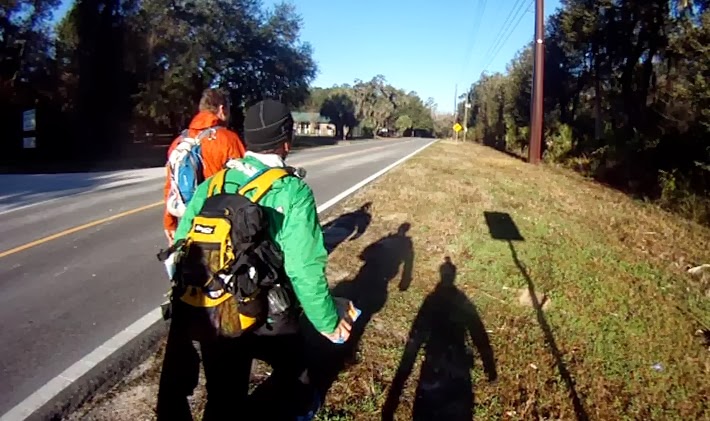 Finding CP25 was pretty tough with the vague, underwater trails, and hard-to-pace-count conditions, but we eventually found it.  The team was really feeling beat by now, and crankiness and chaffage was setting in.  We found the rest of the controls on this route pretty easily.

At Silver TA, we launched our boats off into the really gorgeous Silver River.  They had commercialized this area, with ferries and boats carrying citizens up and down the river.  Even the giant gators nearby were used to the humans, as they did not scuttle away when we paddled up to them (they almost always do).  Tons of wildlife, including turtles, fish, and many species of birds, flocked the shores of this river.  To top it off, it was a typical sunny Florida, blue-skied day, with not one cloud in the sky.  We had a very long effortless paddle where we afforded Bill and Robert some time to sleep. 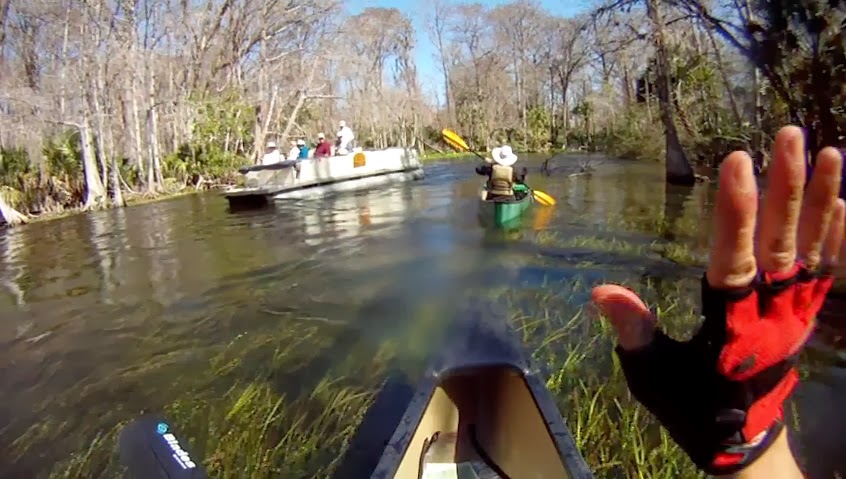 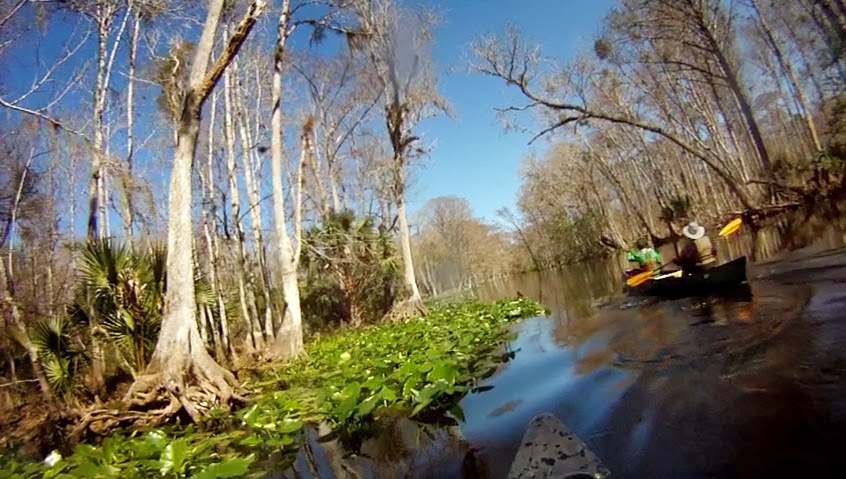 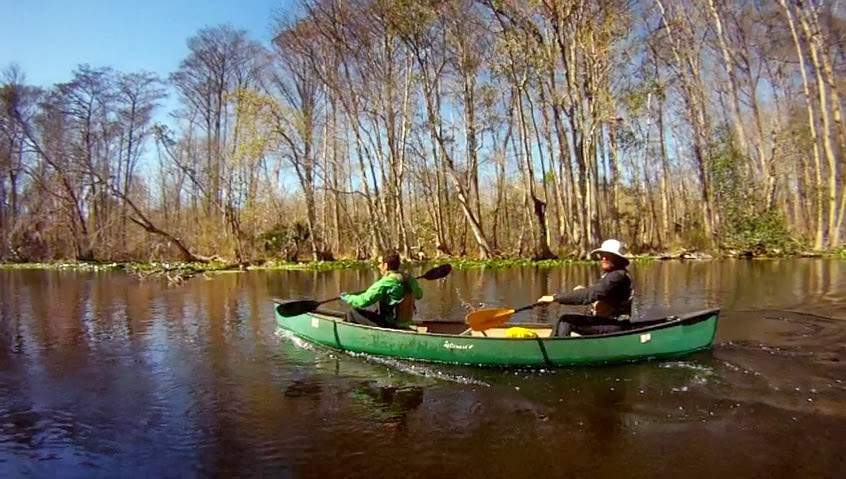 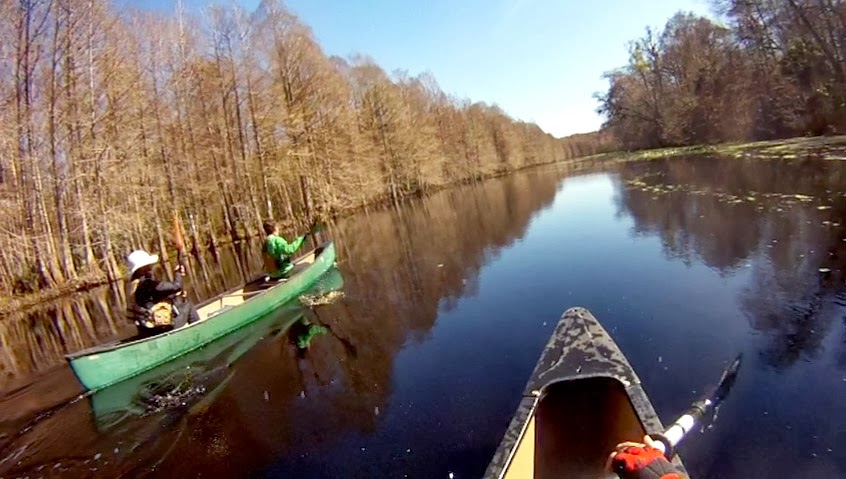 The only outstanding event on this paddle was finding CP31.  As we rounded the corner at point A, I visually gauged 200m from point A to point B.  When I could not find the opening at B, I eventually docked us at point C to find the man-made channel east of us.  After a brief scouting inland, I could not find it, so south we went.  I kept scratching my head, knowing I had tracked every corner of the river, leading us here to the correct spot.  I did not want this one to get away so I used every piece of info on the map I could, even the ever so slight kink at point D.  From D, I determined I could shoot a northeast bearing to find CP31, so we docked again, but this time at point E, where my reverse northeast bearing met the shore.  I knew this one was crazy, as there was absolutely no other solid attack points around.  I sent Nate in, who could sniff any control out if it was in the vicinity.  As he went into the marsh, I explained and tried to convince Robert and Bill my logic.  They listened to me, half awake, half thinking it was a lost cause.  As soon as I finished explaining, Nate yells my name out "Hien!  I found it!"  Ha!  Needless to say, it was voted as most outstanding control find of the race :) 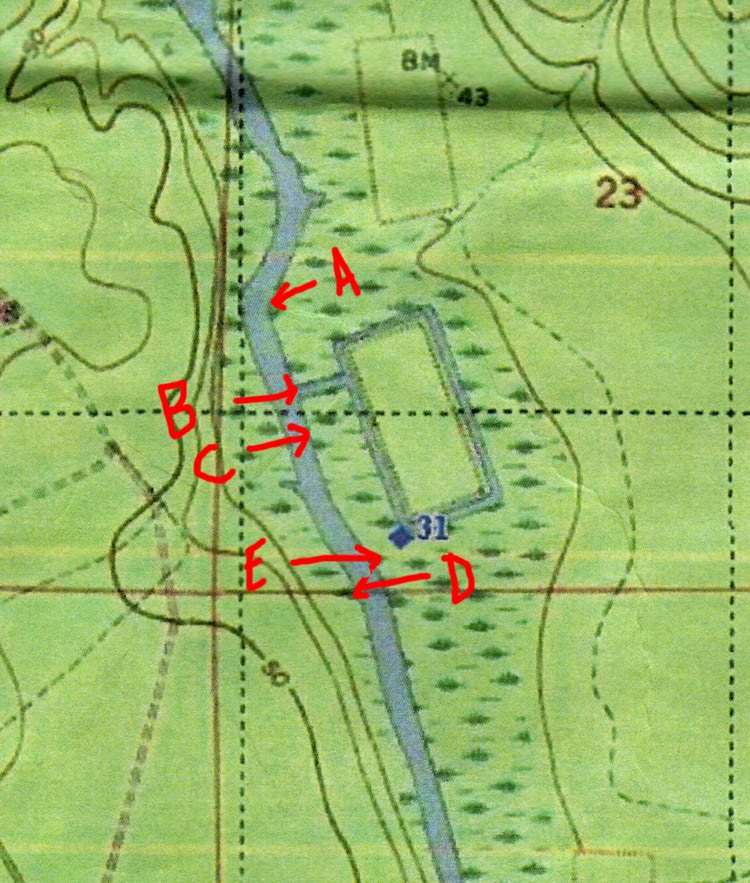 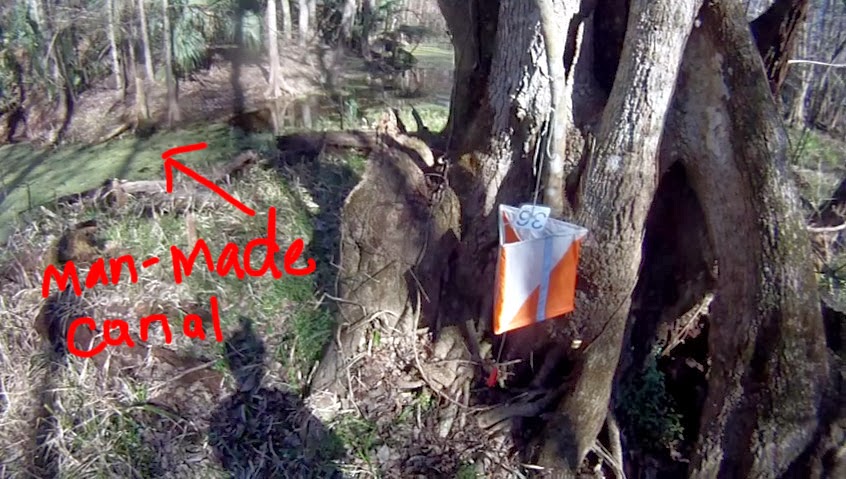 The four hour paddle eventually ended at Ocklawaha TA.  The team caught some sleep there in the afternoon, and we refueled up with another meal while I sorted out the new set of maps received. 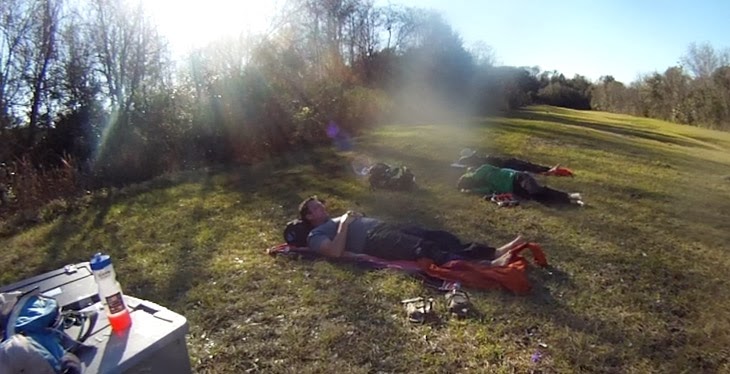 I was loaded on caffeine and was ready to dominate the next few sections.  CP32-34 were pretty easy for me to pinpoint.  The sun went down again and along the way, a few things were accidentally said and assumed, some quarrels erupted, and unfortunately, it set the mood for the next dozen hours.  It was quite distracting to my night navigation, at a time where I needed all the concentration I could get.  Stuff happens when you're sleep deprived and tired. 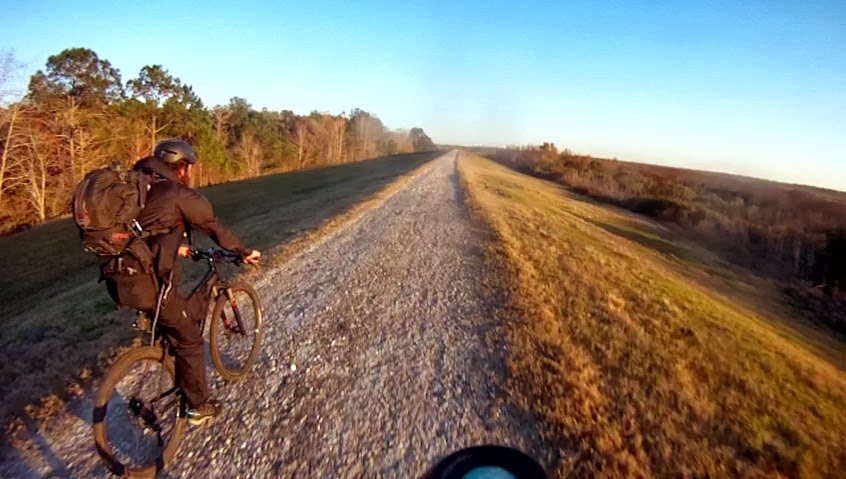 Now we had maps that resembled the Atomic AR in Georgia--lots of elevational changes.  We were in the heart of Ocala National Forest.  The trails were very sandy, and at times, very long and uphilly.  There were no other teams around, and you could feel the cold chill you as you increased in altitude.  This night was forecast to be in the low 40s.  This place was so remote and very Twilight-Zone-ish.

CP35 was the only one to give me some trouble.  Every other CP was nailed with sharp accuracy.  On CP35, we stopped at the correct corner the first time around, but couldn't find the control.  I counted paces back from the next intersection, and we located it.  The sugar sand here was quite a challenge to ride on.  I ate sand many times trying to keep on the bike, only to hit the deck.

At Farles TA, the team was extremely cold and sleepy by now and wanted to sleep in the back of the U-haul.  We did not have our gear bins here, so we had to make do with what we had.  I used a brief moment to continue measuring distances on the maps and to eat down several hundred more calories, in hopes of the body burning it to make heat.  Every other guy had pulled out his emergency blanket for cold protection.

Gradually, I became sleepy as well and laid down on my side, using my Camelbak as a pillow.  The floor bed of the U-haul felt like an ice block.  I toughed it up and waited for my body heat to heat the area I was on.  Ten minutes later, I awoke with the floor bed still the same bone chilling cold block it was when I first laid down on it.  So I shifted my position in a way to only allow my shoulder and arm to touch it, balancing myself on the side of my arm to minimize body contact with the floor bed.  It worked.

Ten minutes later, I awoke to some shivering that would vibrate every 10 seconds.  I shifted around and settled into a decent spot.

Another ten minutes later, Robert and Bill were gone, and Nate had awakened me with some distressed quiet yelling.  He couldn't find any comfort in the back of this U-haul, with the cold being as cold as it was.  I then noticed my my own shivering had gone violent.  Every 2 seconds, every muscle would tense in extreme fashion.  I knew that this sleep was over.  I got up, started doing jumping jacks, pushups, and anything else I could to start burning calories.  It was too cold.  We were on the verge of hypothermia.

As we got out of the back of the U-haul, the stationed volunteer saw our desperate state and directed us to the front of the U-haul, inside the cabin, where Robert and Bill were sleeping.  Oh man...the warmth in there was incredible.  There was one moment where I got back out of the truck to grab the race instructions in the back of the U-haul.  Within 5 seconds of leaving the front seat, I was back in convulsion mode.  I rapidly got what I needed and returned to the heat conditioned warmth inside the truck.  We melted and discussed what we should do next.  No one really wanted to get out of the truck, but we knew we had to move on and race.  One, two, three, and OUT!  We bolted to our gear, grabbed our packs, and ran down to the trail head.  At a time like that, you had to keep moving to warm up.  Success...about a kilometer down the trail, the team was back at operating temperatures again.