This was an extraordinarily long trekking leg.  Yea...that's all I can say to describe it.  Constant walking on off-road trails.  The team was hallucinating various things at this point.  There were tree monsters, non-existent animals, and an elusive 5th teammate.

At Relo TA, we had another full transition of meals and sleep.  The pasta we received here was amazing.  It was yet another cold night, but luckily we had access to our gear bins here.  The other guys got sleep in their sleeping bags while I strategized the maps for the remaining segments.  They probably got a solid hour of restful sleep in the back of a U-haul, while I got a blink of an eye's worth.  There were many teams here just dozing away, some in front of campfires. 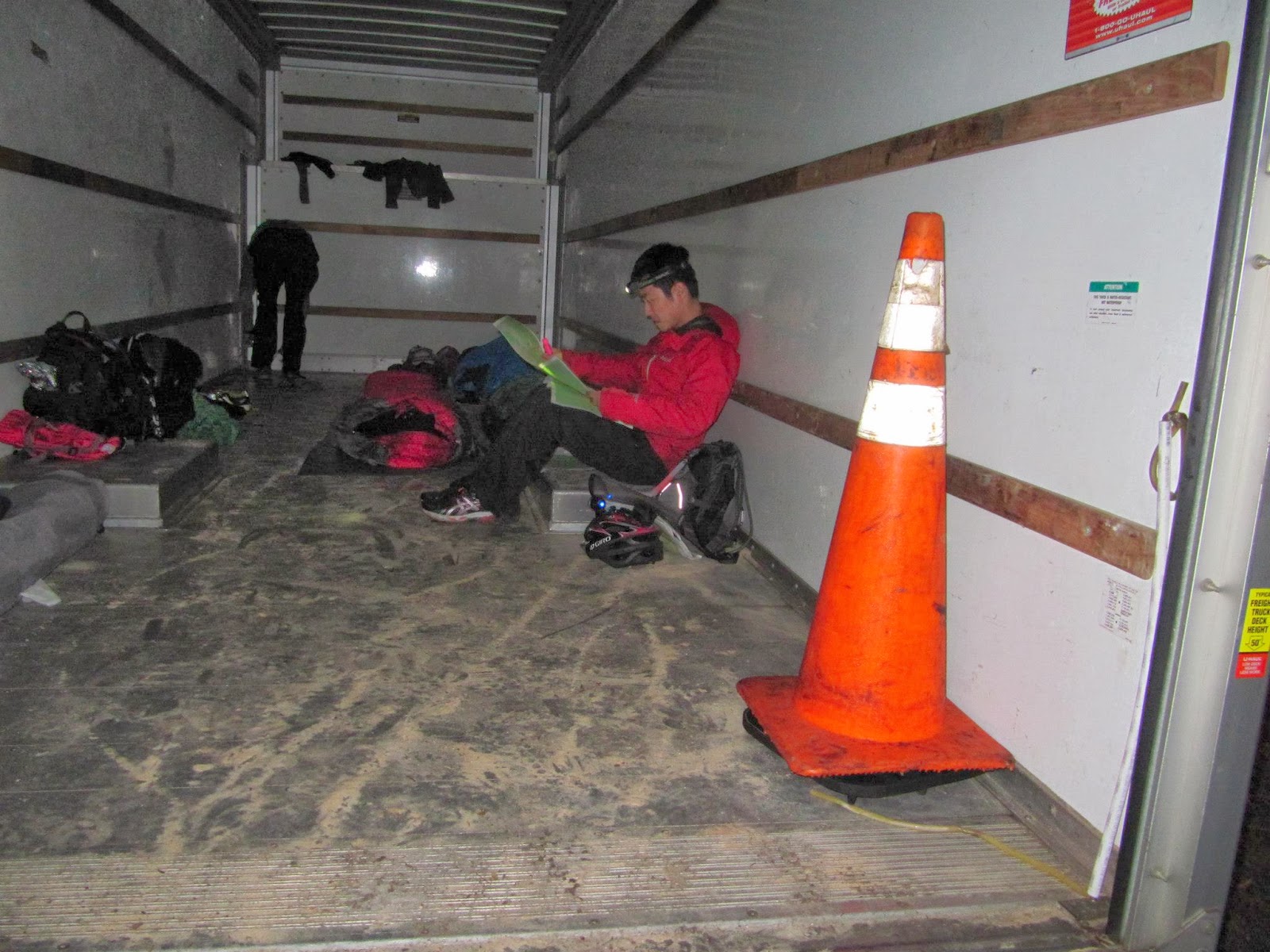 We waited until sunrise before doing anything.  Bill's cold went from bad to worse.  He definitely could not go through another chilling night, so we strategized a plan to maximize our points in the daytime and getting back to Ormond Beach before nightfall.  That meant taking the shortcut way home that Greg Owens showed us.  The return was 85km on bike, skipping several legs of race, but still grabbing a handful on the way over.  There was just a little bit of time for us to find a few controls in the next orienteering leg as well. 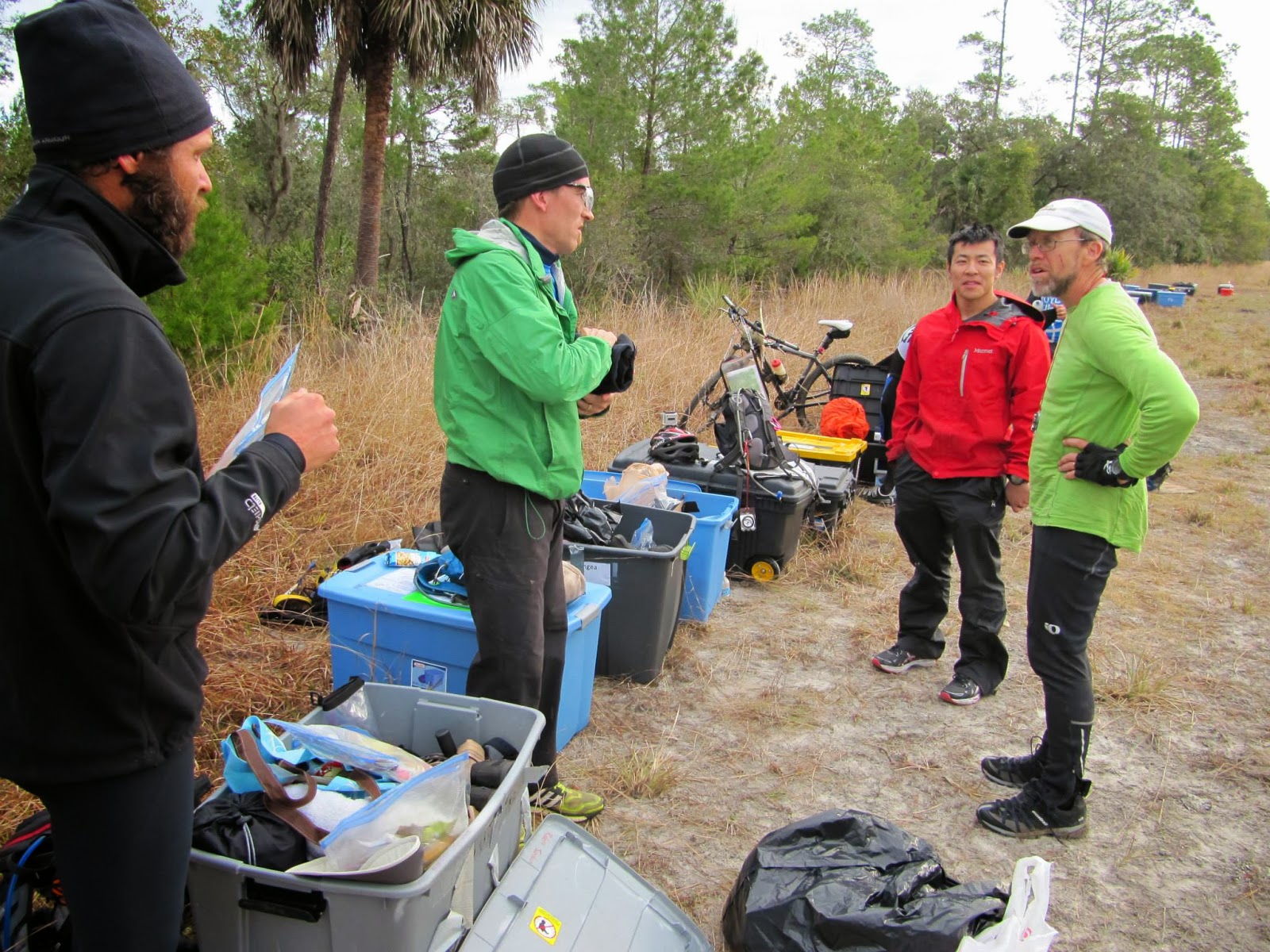 Top teams were finishing this orienteering leg in about 12hrs through the night.  We figured we would pick up 3 or 4 controls and then start the journey home.

The first control was easy to hit, CP1.  After hearing Ron Eaglin's account of missing trails and such, I decided that we should just use straight bushwhack bearings to find our controls in this segment.  The team couldn't run anymore, so that made the most sense.

CP2 required a 650m bushwhack--a very long length.  I precisely measured a bearing before heading out.  Once there, we found no depressions to house the control.  After a time consuming scramble, we reset and shot the bearing back out again.  Nothing.  Then Robert shot his own bearing out and bingo...he nailed it.  The difference?  His compass was un-declinated.  I had forgotten to reset my compass declination with these True North maps.

With the time lost there, we decided to find only one more control, CP4, before heading back to Relo TA.

I was fading fast, mentally, and so handed the maps over to Robert to navigate us back home.  He had a mess of maps to sort through for this ride back.  CP46 and 47 were pretty straightforward.  We had some difficulty at CP48, but eventually found it.  CP49 was located through some thick walls of brambles that Nate found immediately after claiming he would just "sniff this one out". 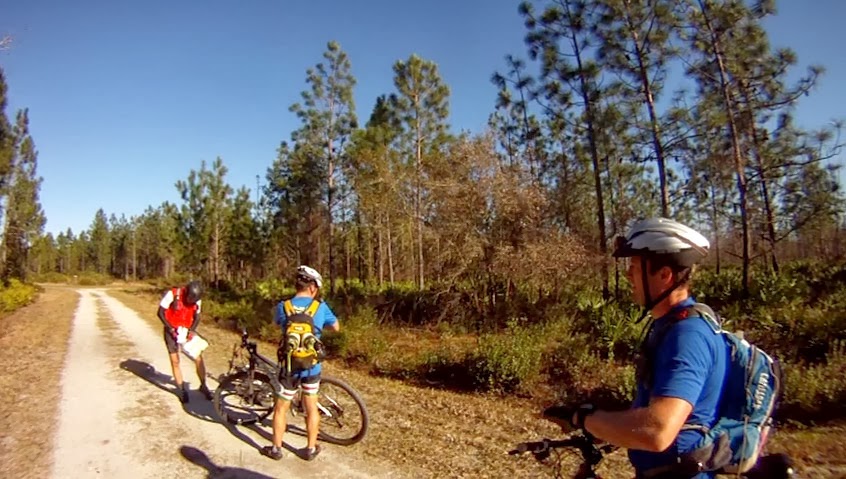 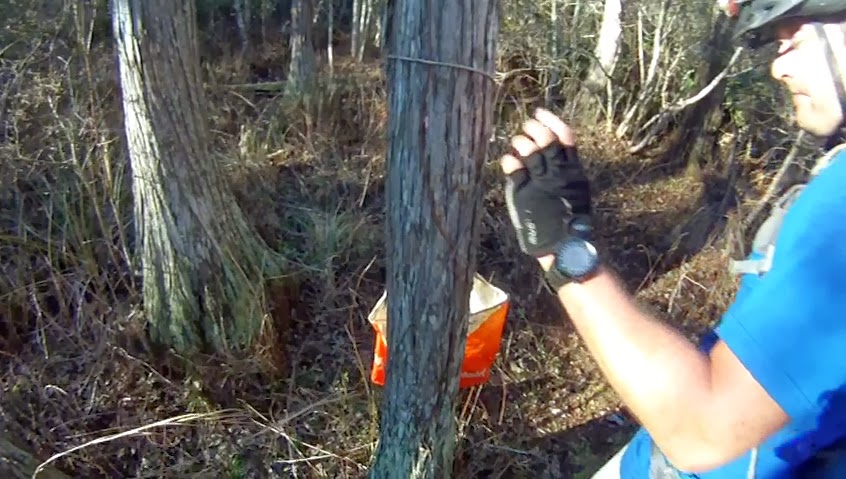 From there on out, it was a ride on roads to get us to Highbridge TA, location of the last CP. 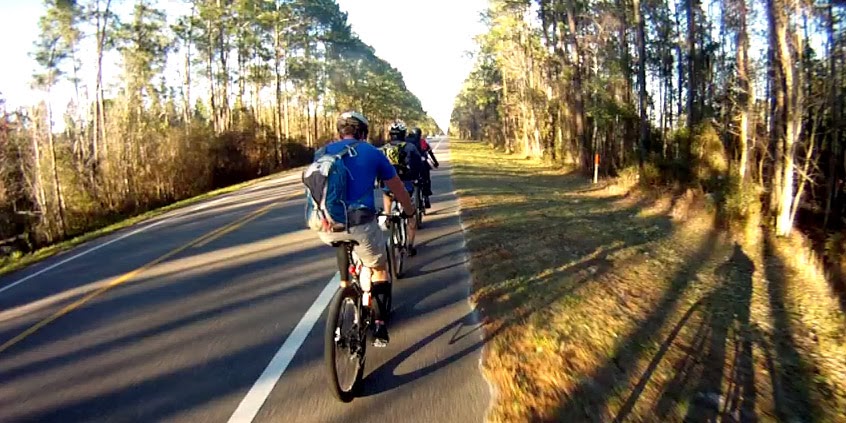 I nearly fell asleep on the bike ride back home 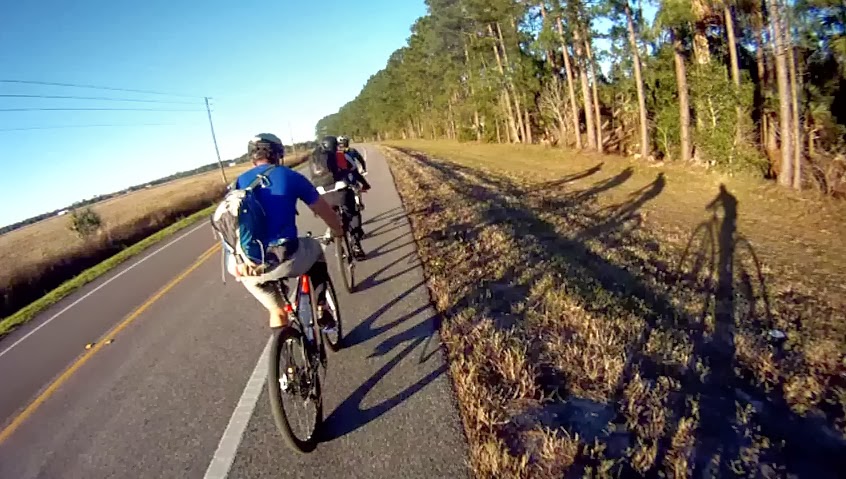 stopping at a gas station for some more caffeine

We arrived at Highbridge TA at nightfall and punched the final control.  From here, it was a long mind-numbing 11.5km, 2½hr walk to the hotel to finish the race. 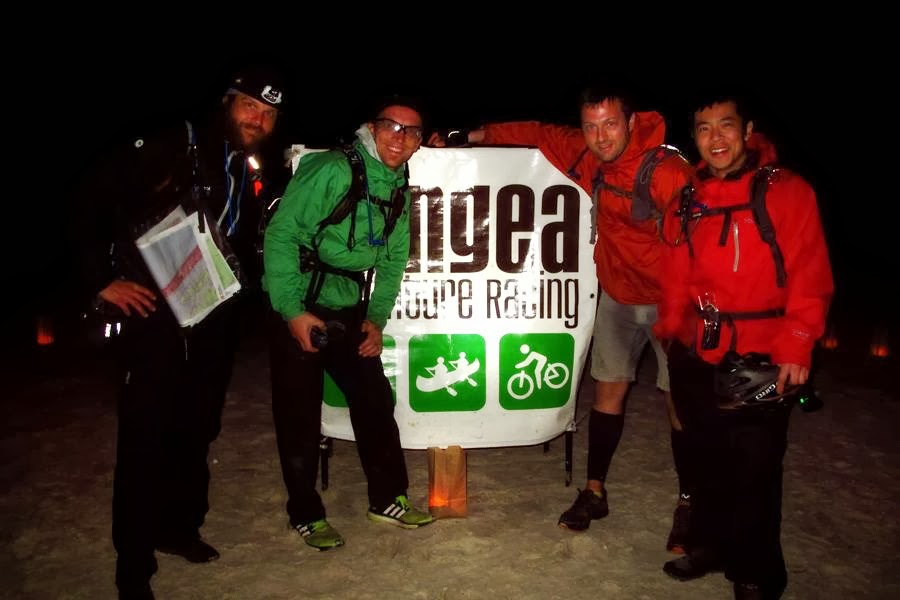 All in all, we found every control point that we went out to search for, finding 47 out of 72 in 59hrs.  The total distance for us was 350km exactly.  Who else can claim they went from one sea to another under their own power?  With those stats, we took the final spot as top four male team to be invited to the USARA National Championships in October! 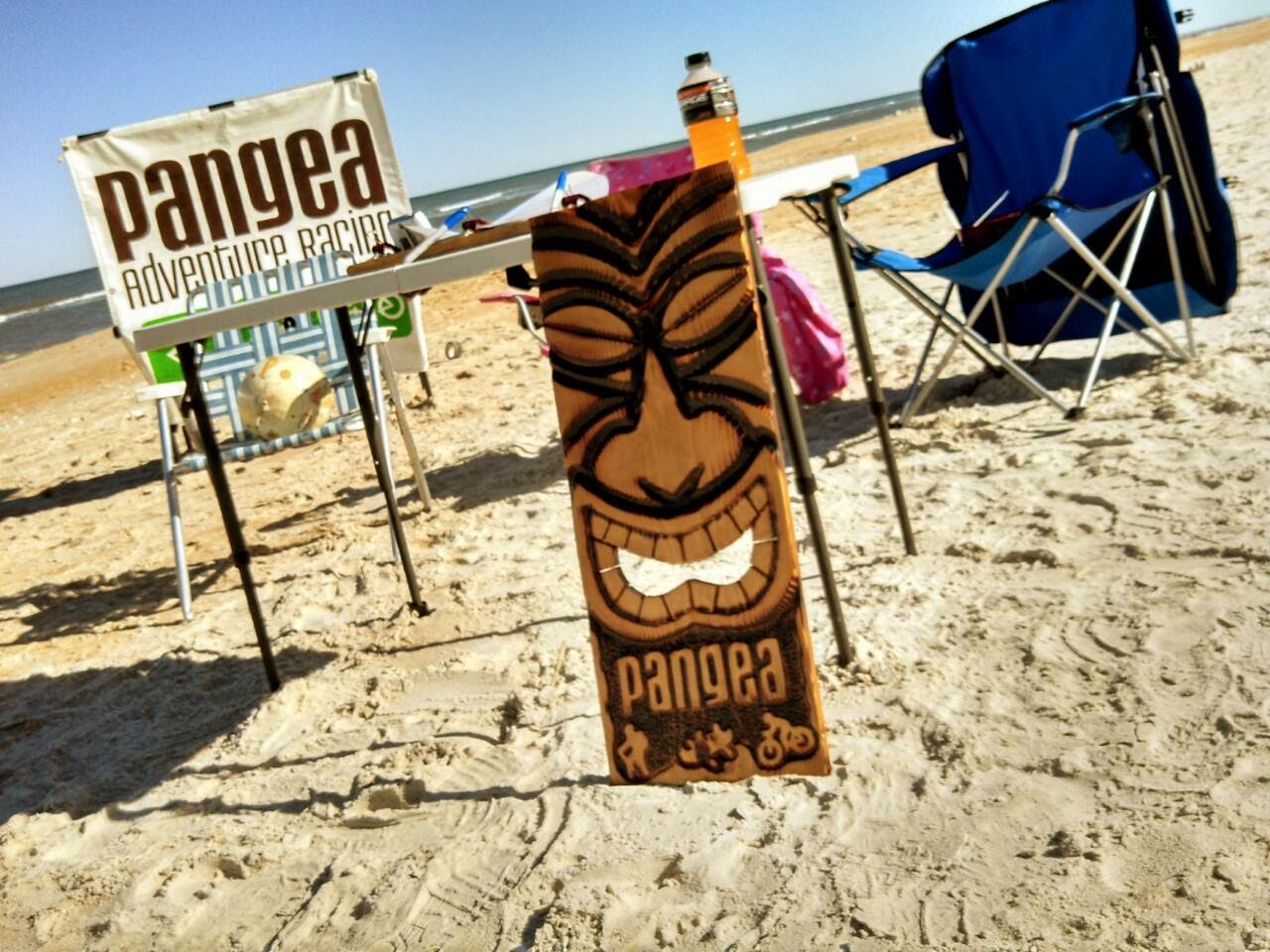